Groupon Moves Deeper in the Discount Space With 'Freebies' 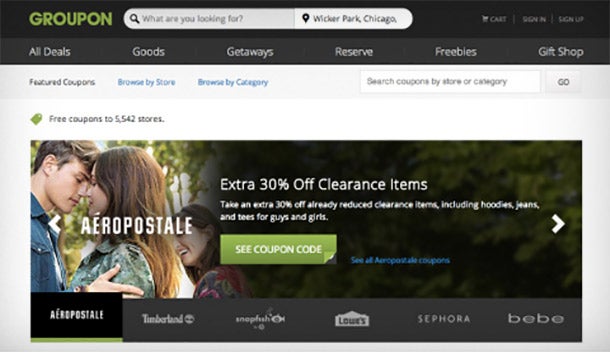 Groupon wants to be the discount-deal mecca on the internet.

Today, the Chicago-based daily deal site launched Freebies, which, despite its name, does not offer exclusively “free” items. Rather, the new feature offers all sorts of e-commerce deals to large department and big box stores, including digital coupons, promotion codes, news about sales, giveaways and product samples.

The site launched, just in time for the holiday shopping rush, with more than 5,000 offers from the likes of American Apparel, Sephora, Best Buy, Macy’s and Nordstrom.

Related: Groupon Gets Up On the Localization Game. Finally!?

Macy’s, for example, had 266 coupons available as of 10 a.m. EST today. One typical example being offered on Groupon Freebies is that by entering the coupon code “TOMMY” at checkout, a shopper would get $25 off a $100 Tommy Hilfiger order at Macy’s.

The brands and retailers will pay Groupon a percentage of the amount of sales generated from the coupons.

Despite corporate tumult, including the ousting of founder Andrew Mason back in February, the daily deal site has been expanding its offerings aggressively, from automatically pushing local deals to your mobile device to its upscale restaurant reservation service, Groupon Reserve, catering to luxury-class clientele.

Related: Groupon's New CEO May Be Its Best Deal Yet