Look, up in the sky! No, it's not a bird. Not a plane, either. It's a state-of-the-art digital video camera attached to a remote-controlled drone--and it could revolutionize filmmaking by capturing flyovers, 360-degree panoramas, chase scenes and other "How did they do that?" action sequences at a fraction of traditional production costs.

The custom-built, carbon-fiber-based drones are designed and assembled by Costa Mesa, Calif.-based Aerial Media Pros. While roughly the same size as some radio-controlled helicopters sold at hobby shops, these are assuredly not toys: The drones are constructed to cradle and lift cinema-quality cameras like Red Digital Cinema's high-resolution Epic (used to shoot Hollywood blockbusters like The Hobbit: The Desolation of Smaug and Ender's Game), and their size and agility enable camera operators to fly them into spaces where humans and full-size aircraft can't follow. 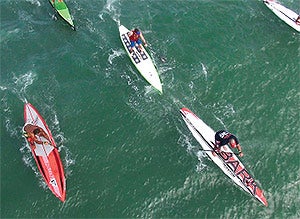 "There's no other way to capture some of the shots we get," says Patrick Smith, founder and CEO of Aerial Media Pros. "We're getting footage that blows away everyone else."

Smith, a U.S. Marine Corps veteran, launched Aerial Media Pros in 2011 after abandoning a job that quite literally sucked: selling Kirby vacuums door-to-door. On a whim, the lifelong enthusiast of radio-controlled flying gadgets attached a small video camera to one of his planes and was amazed to discover the quality of the resulting footage. "There were [production crews] paying between $5,000 and $10,000 an hour to rent planes to film the same kind of stuff I could do with an RC," he recalls.

Soon Smith began devising bigger, better copters that could reliably carry pricier cameras without crashing; he also created a 360-degree camera mount capable of stabilizing the camera in air and keeping it level with the horizon line, regardless of the drone's movements. Other Aerial Media Pros innovations include a wireless video downlink system that connects the camera to the ground and a base station that supports live camera-feed viewing, so production crews can see everything the drone is filming. 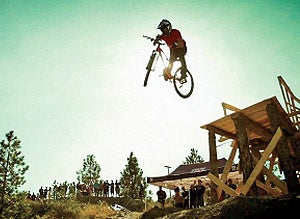 "With these copters, a camera can close in 10 feet away from the subject or pull out 400 feet away. It can fly through windows or the door of a house, or fly across the water," Smith boasts. "The possibilities really get the creative juices going."

At first Smith leased out his equipment and expertise to production crews, quickly evolving from real-estate shoots to Snoop Dogg music videos to feature films like the Taylor Lautner vehicle Tracers. But as time has gone on, Smith has turned over on-site videography duties to other Aerial Media Pros staffers and is focusing on product research and design.

The company now sells close to two dozen ready-to-fly copter models, ranging from the $749 entry-level Phantom Beginner Combo (which comprises a copter, radio controller, charger, three batteries and a custom travel case) to the Skyjib 8 Titanium Red Epic Octocopter, which is built specifically to fly a new Red Epic camera and carries a price tag of $28,900. 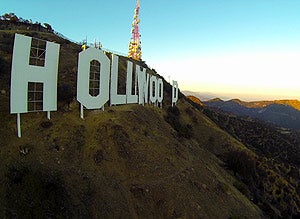 An airborne concept shot in the Hollywood Hills

"Patrick is the only guy I know who's able to build these kinds of drones," says freelance camera operator Tonaci Tran, a veteran of multiple independent films. "He built me a drone to fly my Red Epic, and it extended my business. I'm able to get shots that weren't even possible two or three years ago." --Jason Ankeny

For copter-driven photography businesses, the sky's the limit

Aerial Media Pros' professional-grade videography copters can set shoppers back anywhere from $6,739 to $28,900--a cost that far exceeds most hobbyist budgets. But the company also offers entry-level packages beginning at $749. And what starts out as a weekend diversion could quickly evolve into a moneymaking pursuit, says Aerial Media Pros founder and CEO Patrick Smith.

Smith says copter owners interested in monetizing their investment can market their services to real-estate firms, farmers and other local businesses who stand to benefit from aerial photography, earning anywhere from $500 to $1,500 per shoot to start.

"You'll meet a guy who wants you to film a house, and his buddy will say 'Hey, film this farm for me.' And then that guy's friend asks you to film his solar-panel factory," Smith explains. "It snowballs, and a month later you're making thousands of bucks per shoot."

In fact, while aerial cinematography is synonymous with feature films, music videos and other entertainment spectacles, Smith says only about 30 percent of the market is dedicated to high-end production, with real-estate gigs and other smaller-scale projects making up the remaining 70 percent.

Aerial Media Pros is now focusing its efforts on developing equipment for the government sector, with an emphasis on aiding search-and-rescue teams and agricultural survey crews. "Instead of hiring an airplane to fly over crops to find out where vegetation is getting water and where it's dying, you can send out a copter," Smith says. "There are so many applications [for drone technology]. Every day is an adventure." --J.A.