Las Vegas, Denver and Reno, Nev., mix together a vibrant startup culture with world-class recreation or entertainment. And they all do it in places with plenty of affordable housing, a few million fewer highway-clogging cars and minus the debate over gentrification.

1. Las Vegas. Tony Hsieh gets credit for jump-starting Las Vegas’ startup scene with his $350 million Downtown Project, but the city has grown into much more than his personal project. Switch Communication’s founder, Rob Roy, is pumping money and energy into the InNEVation Center, a collaboration space that delivers some of the fastest Internet speeds in the world (courtesy of his company's SuperNAP data center) and serves as a meeting place for startup and economic development events.

While the VegasTech Fund, founded by Hsieh, is a big influencer in town, early-stage and maturing Las Vegas companies can seek financing from the Las Vegas Valley Angels, Brennan Capital and state sources like the Battle Born Venture Fund and the Silver State Opportunities Fund.

Competitive advantages: Las Vegas is an hour's flight away from California's two biggest population centers and the center of the convention and trade show universe. Representatives of the largest companies in the world touch down for business networking and product launches. Las Vegas has affordable housing and business costs, anchor businesses like Zappos and Switch Communications and a year-round industry-event schedule. Median home prices are $164,700, according to Zillow; about half a million dollars less than San Jose's.

2. Denver. A healthy startup ecosystem includes companies of all maturity levels, whereby ones that have grown from shoestring outfits to market leaders might reinvest in the community. And Denver has businesses in fast-growing industries and companies large and small, young and mature. Denver-based businesses like HomeAdvisor, now a subsidiary of IAC with 1,200 employees, participate in community-building events like Denver Startup Week.

At the center of Denver’s startup activity is Galvanize, a 30,000-square-foot entrepreneurial campus including a venture capital funding firm, as well as collaborative co-working space and a social hub for events and education. Companies with origins in the Denver area include Mapquest, Photobucket, Rally Software, Cloudzilla and Forkly.

Firms like Grotech Ventures, with offices in Denver, are financing startups and are joined by large Boulder-based funds like the Foundry Group.

Competitive advantage: Denver is located in a mountainous region that many consider more of a vacation destination than a business hub. Indeed Colorado ski resorts are just down the highway and the area's mountain biking and hiking trails are virtually endless. Denver offers all of this, while retaining an affordable cost of living. Home prices, at a median level of $254,800, are higher than in Reno, Nev., and Las Vegas, but still less than half the price of San Jose's.

Related: The 10 Best Cities for Buying or Selling a Home

3. Reno’s allure lies with its geographic location, affordability and emerging and energetic startup scene. It’s a morning’s drive from Silicon Valley and just a half-hour car trip from the ski slopes and beaches of Lake Tahoe. That mix of business friendliness, quality of life and entrepreneurial energy is attracting small, scrappy startups and the satellite offices of some of the world's largest technology companies.

The Biggest Little City has transitioned from a gambling mecca into an entrepreneurial hot spot. Tesla Motors is eyeing the city to house its new “gigafactory,” a multibillon-dollar battery-production headquarters; Apple has already built a data center there and Intuit, Microsoft Licensing and Drone America are headquartered in town. Homegrown startups are sprouting downtown. Reno’s Startup Row along the Truckee River features cloud-computing companies and fitness-software outfits, a vibrant co-working collective and a hardware developer that builds microcontrollers.

Capital needed to fuel startup activity is also available: The Silver State Opportunities Fund is investing $50 million in Nevada-based business. And the Battle Born Venture Fund is a state fund that provides critical funding for early-stage, high-growth companies in Nevada. The Reno Accelerator Fund invests in early-stage companies in the capital.

Competitive advantage: Reno’s home prices are a world away from Silicon Valley's. The median Reno home price is $198,700, according to Zillow (less than a third of San Jose's) so nearby tech startups and maturing companies don’t have to worry about employees struggling to find homes or commuting long hours.

Reno’s tax environment is considered business friendly. And city's startup scene is alongside a downtown whitewater kayak park with terrific skiing and a web of mountain bike trails nearby. Plus, Reno’s thriving bar, restaurant, coffee and entertainment scene includes Campo, named one of the nation’s best new restaurants by Esquire in 2012.

Below see an infographic created by the Economic Development Agency for Western Nevada to market Reno's startup culture.

Related: Should You Go East Or West for Your Venture Capital? 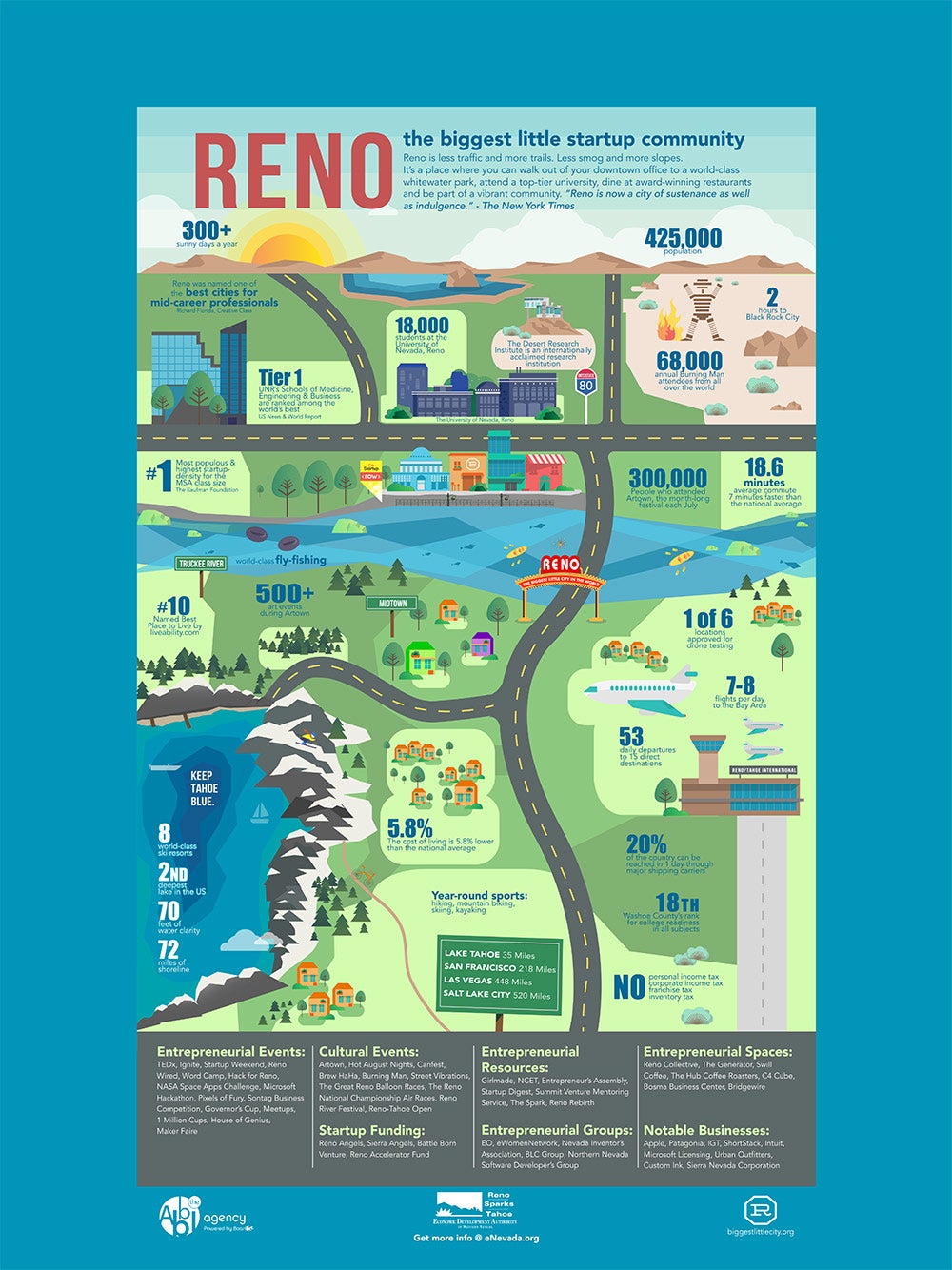 What Tech Entrepreneurs Can Learn From the Startup That Beat Google

How to Build Incredible, Game-Changing Technology Fast (and Right)