When Entrepreneur.com arrived in Shoreham, Vt., to shoot a story about WhistlePig whiskey, founder Raj Peter Bhakta suggested the interview be done on the icy pond on his property. To scout out the location, he herded the crew and his wife into his four-wheel drive vehicle and drove straight onto the frozen pond without hesitation.

This sort of bravado is Bhakta’s signature. It's both his Achilles heel and his knockout punch.

The 38-year-old intends to make WhistlePig the first farm-to-bottle whiskey brand made entirely in the U.S. since Prohibition. Everything from growing the rye whiskey to packing the boxes and shipping them off to retailers will happen on his 1,200-acre farm. Eventually. Because his distillery is just now being built, Bhakta outsourced his first batch of aged, rye whiskey so he could kick off his business. That means operations on the farm are currently confined to aging the already-distilled whiskey, bottling and distribution.

Already, Whistle Pig is a success. The company launched in 2007 and currently does millions of dollars in sales each year, according to Bhakta's wife and sales and marketing director, Danhee Kim. But if Bhakta has his way, Whistle Pig is just getting going.

A backdrop of failed pursuits

Bhakta's plan out of college was to join the Marines, but a shoulder injury ruined that, so he went into investment banking instead. In 2000, he and a friend started a web-based business called Automovia that was bought by Chrysler two years later. While his investors were paid, Bhakta counts that venture as a personal loss as the company never launched the consumer application it set out to create. After that, Bhakta gathered an investor group and led the redevelopment of a hotel in Vail, Colo.

His next move was snagging a spot on the second season of Donald Trump’s show, The Apprentice. “A friend of mine called me up and says, Raj, that’s your plan. Just go onto The Apprentice. Your dad is a big fan of Trump. It will be peace with honor. You are going to walk out of that place with honor,” says Bhakta. 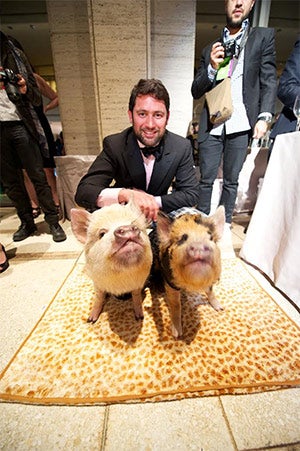 And so he did. And he lost. With the fame that The Apprentice provided him, Bhakta became something of a political commentator, at one point riding an elephant across the Rio Grande into Mexico -- accompanied by a mariachi band -- to make a show of border security. In 2005, he ran for Congress in the 13th district of Pennsylvania and lost. And in 2006, he set out to find an Indian version of Steve Irwin, the "Crocodile Hunter," thinking it would make for great TV. That didn't pan out either.

“I really felt like a loser. [I thought,] you couldn’t win The Apprentice, you couldn’t win a congressional race, you can’t find in India one guy who could fit the bill to be Steve Irwin. Maybe, just maybe, the whole concept that you will be a successful guy is not going to happen."

In 2007, the same friend who had encouraged him to go on The Apprentice convinced him to buy a farm in Vermont, where he went to lick his wounds.

"I figured I would just sit on the farm, watch the seasons change and that God would speak to me about what I should do next. God did not speak to me,” Bhakta says.

The financial crisis hit. Bhakta was running out of money. A combination of desperation, conviction and passion fueled him to enter the whiskey business.

“After two years of studying the spirits business and having conducted perhaps the most thorough and long term due diligence program ever – that is, consuming lots of fine whiskey since I was 18 – I resolved to finally make a profit on a habit in which I had invested so much time, effort, money, and reputation,” he says.

From the point where Bhakta decided on a 10-year, aged rye whiskey to the time when the product was on the shelves was only six months. Part of what allowed Bhakta and his team to move so quickly was that he was starting up during the Great Recession, so prices were lower and there was less competition for production supplies and services. He also had a firm goal: to make the world's best whiskey.

The easiest part of launching WhistlePig was naming it. Years before, Bhakta had been hiking in a remote area of Colorado when a short man with a crop of white hair appeared of the middle of nowhere, approached him and said, in a thick French accent, “Could this be a WhistlePig?” Bhakta was perplexed. “He says ‘WhistlePig’ looking at me like what kind of an idiot are you that you don’t know what a WhistlePig is?" The man snapped his fingers in Bhatka's face, threw his arms up in the air and left. The strange encounter stuck with Bhatka, who decided it must be a sign from above. He filed the name away in his brain and resurrected it later.

“When I bought the farm, I called it WhistlePig Farm. And when I had the beginnings of conjuring a whiskey brand, it was a no brainer. It was WhistlePig all the way,” he says.

WhistlePig's mascots -- two Kunekune pigs named Mauve and Mortimer -- were brought from New Zealand and Bhakta has taken them out for walks, even in New York City. He says they represent the "irreverence" of the brand.

And, like everything else he's done, the attention always helps. “To have pigs walking around New York City, Fifth Avenue boutiques and Madison Avenue shops, it sort of says unusual.”