Are You Trying Too Hard on Social Media? This Website Will Let You Know.

No one wants to be "that person" on social media. You know the one: the friend who puts up dozens of identical photos on Facebook, the startup that tweets almost entirely in hashtags or the entrepreneur who won't stop posting endless "#selfies" on Instagram. In other words, the person who just tries too hard.

Even the most social media literate individuals sometimes worry that they're coming off too aggressively on social media, annoying their followers. Well for all those folks that are wondering if they are a total drag, you are in luck. Enter the Social Effort Scale. 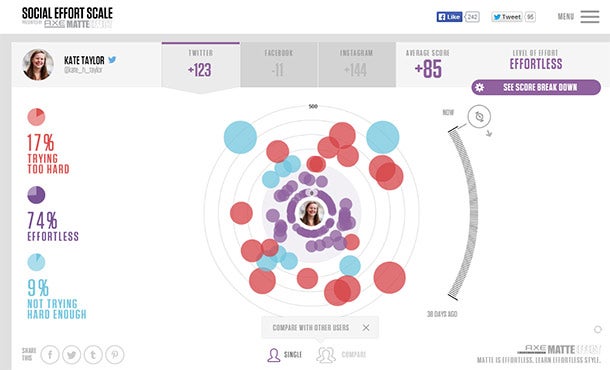 Men's grooming product line Axe and creative agency Barton F. Graf 9000 showcased the Social Effort Scale alongside Axe's new line of hair products on a website.  While Axe intended the scale as a tool for men who may be scaring off women by trying too hard online, the website is instructive for anyone building their personal brand or managing a company's social media outlets.

The website uses an algorithm to determine if social media users are "effortless," "trying too hard," or "not trying hard enough," on Twitter, Facebook and Instagram. The website's algorithm pulls different data for each social media site. On Twitter, overuse of hashtags, mentions and buzzwords are try-hard red flags. Instagram is similar, with the added danger of overly filtered photos. On Facebook, the scale takes frequency of status updates, shares, tagged photos and more into account. (just moved some things around) 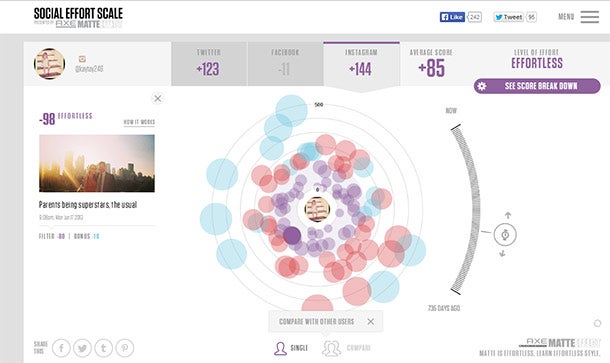 I decided to plug in my own information and see where I fell on the try-hard scale. According to the scale, I'm exerting almost exactly the correct amount of effort via social media. While my Instagram and Facebook could use some help (not trying quite hard enough on Facebook and trying a little too hard on Instagram), my Twitter is apparently 74 percent effortless, meaning I don't annoy my friends by using too many hashtags.

Related: 3 Ways to Master the Hashtag 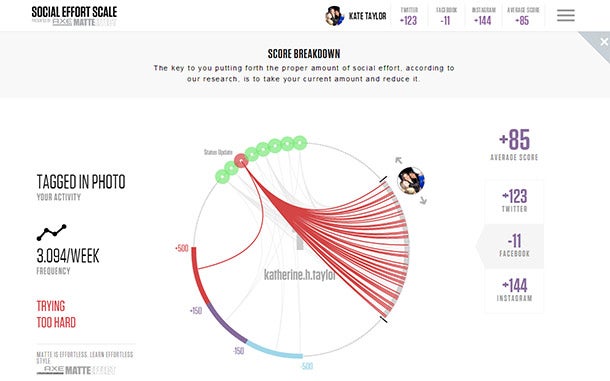 An interesting aspect of Axe's algorithm is that if a Tweet is "trying too hard" seems to have little to do with its effectiveness. Some of my Tweets that the scale determined to be trying too hard gained significantly more "likes" and "retweets" than posts the algorithm deemed "effortless." 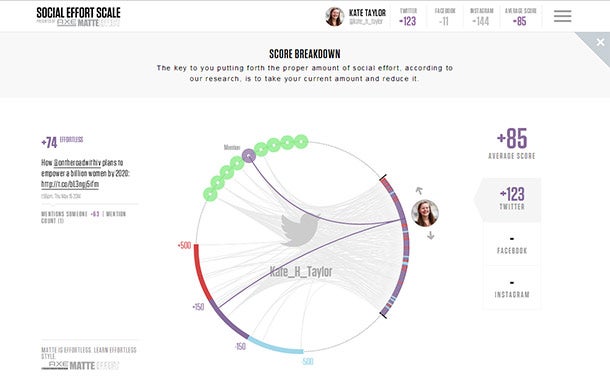 Social media can be an incredible tool for individuals and businesses alike. However, many aspects of social media that can help you connect with others, from hashtags to Facebook photos, can exhaust both potential customers and friends if overused. Sign into the Social Media Scale and get the cold hard facts on if you are a social media try-hard.

Related: Useful and Easy Gets More People Sharing Your Content