These Entrepreneurs Found a Way to Make Energy-Efficient Vodka


Organic, local and sustainable all have their places in the craft distilling movement. How about energy efficient?

It's a priority for Industry Standard vodka (about $37)—which is, as the bottle reads in part, "made by nerds." "The entire goal of the distillery was to make the most product in the smallest square footage using the least amount of power, all while making fantastic product," David Kyrejko, one of the distillers, told CNBC.

Industry City Distillery is itself a project of Brooklyn research and design firm The City Foundry, which calls 12,000 square feet of a sprawling Brooklyn warehouse home. The distillery uses less than a tenth of that space—a smaller footprint than many New York City one-bedroom apartments—to make 2,000 bottles a month, with plans to ramp up to 4,000 bottles per month. There's also a machine shop, where all of the distillery equipment is made, and a lab for testing new ideas.

Typically, vodka distillation goes something like this: Prepare a mash, usually with grains or vegetables. Add yeast and ferment for several days. Collect the fermented liquid and distill it in a large pot or column still. Re-distill two or more times, as needed. Filter. Dilute with purified water to desired strength, and then bottle.

Read More: Bartender, make me something with gin

From an energy-efficiency perspective, there's plenty of room for improvement. "The way that most distilleries are set up is kind of linear, and therefore there's a lot of waste of energy," said Andrew Faulkner, judging director of the American Distilling Institute. 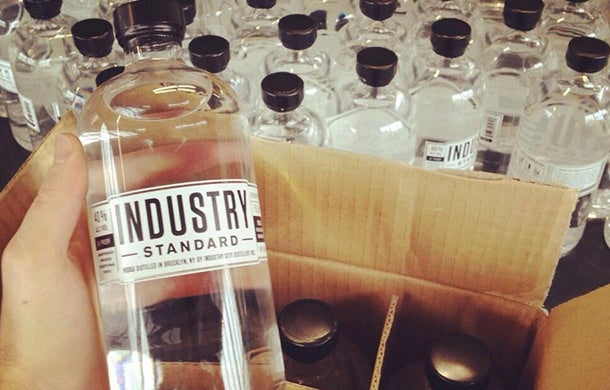 Industry City's process, detailed in tour versions it classifies as "nerdy and nerdier," deviates substantially. "We've borrowed ideas from industry that are common knowledge, to improve the distilling," said Kyrejko. Rather than pursuing patents, their innovations are licensed under Creative Commons, which allows others to use and build on the ideas.

To start, yeast is grown in-house using a yeast propagator, whirled in a centrifuge and then mixed with alginate to create yeast beads. (The beads are not too far off from the molecular gastronomy "caviar" of olive oil or juice you might try at a restaurant.)

Read More: Here's why you ordered that premium cocktail

Those beads go into an immobilized cell bioreactor, where a mixture of beet sugar and water passes through them, fermenting in just 24 hours. No giant vats like you might see in other distilleries. Each bioreactor takes up a spare 7 square inches of floor space. At full capacity, the distillery will have four "in what amounts to less space than a closet," said Kyrejko.

"That's pretty advanced technology that's really not used in the beverage industry," said J.D. Angell, a spokesman with White Labs, which supplies yeast and provides fermentation services for breweries, wineries and distilleries. Bioreactors are more often used in the production of fuel ethanol, he said.

Nor do most distilleries make their own yeast. "Propagating yeast in-house is a science of its own," Angell said.

Read More: Is that a dandelion in my drink? Cocktails go wild

After fermentation, Industry City's resulting wash goes into a continuous steam-powered stripping still. Heat exchange between the incoming mash and the outgoing waste product makes the process even more efficient—it saves energy needed to heat the former and cool the latter.

Then it's on to a finishing still, from which Industry City takes 30 cuts, what it calls fractions. (More commonly, distillers make just three—head, heart and tail, of which usually only the heart is kept.) More cuts equals more work, requiring the team to switch bottles every 17 minutes at the alert of a bell, but Kyrejko said it also eliminates the need for filtering and allows for precise blending.

"We consistently throw out Bottle 15, every time," he said. "Comparing it to the heads, hearts and tails ideal, Bottle 15 should be the hearts of the hearts, so it's funny that we always throw it away."

Read More: An old-fashioned process for a brand-new tequila

Even then, there's no waste. Any vodka that doesn't make it into the final product is used as solvent in the machine shop. 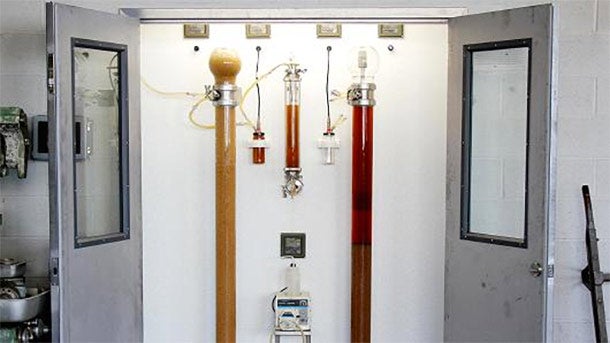 The result of Industry City's, er, industry is a vodka that bucks category trends. It's smooth and yet flavorful, with some hints of vanilla and fruit.

"People think vodka is supposed to be tasteless, neutral, odorless—basically an alcohol delivery system," said Nima Ansari, spirit buyer and sales manager for New York City's Astor Wines and Spirits, which was the first to carry Industry Standard. "These guys [at Industry City] are seeing possibilities in the process."

Read More: Mistakes that are ruining your homemade cocktails

Industry Standard is certainly sippable neat, but the bulk of buyers are New York City bars and restaurants using the vodka in craft cocktails. At ABC Kitchen, for example, there's the Rhub-y Mint, which pairs the vodka with rhubarb, orgeat and mint. Black Tree has it in a seasonal martini with pickled beets.

Home bartenders may find that Industry Standard makes a neat sub in drinks that call for tequila or whiskey, Kyrejko said. Try their take on a Manhattan, below.

5 Ways to Inspire Creativity and Innovation in Your Employees