How to Recover When Stress Starts to Build Up

By James Clear November 12, 2014
This story originally appeared on JamesClear.com

It was my first year of graduate school and my professor was standing at the front of the room. He was telling our class about a mistake he made years before.

About a decade earlier, my professor had been one of the senior executives at Sears, Roebuck & Company, the large department store chain. They were in the middle of a massive national campaign and preparing for a major brand launch. My professor was leading the operation.

For almost two months prior to the launch day, he was flying all over the country to strike up buzz with major partners and media companies. While criss-crossing the country on flight after flight, he was also trying to run his department from the road. For weeks on end he would meet with the media and business partners all day, answer emails and phone calls all night, squeeze in 3 or 4 hours of sleep, and wake up to do it all over again.

The week before the big launch day, his body gave out on him. He had to be rushed to the hospital. Major organs had started to fail from the chronic stress. He spent the next eight days lying in a hospital bed, unable to do anything as the launch day came and went.

Related: How to Develop Mental Toughness in the Face of Adversity

Your Bucket of Health and Energy

Imagine that your health and energy are a bucket of water.

In your day-to-day life, there are things that fill your bucket up. These are inputs like sleep, nutrition, meditation, stretching, laughter, and other forms of recovery.

There are also forces that drain the water from your bucket. These are outputs like lifting weights or running, stress from work or school, relationship problems, or other forms of stress and anxiety. 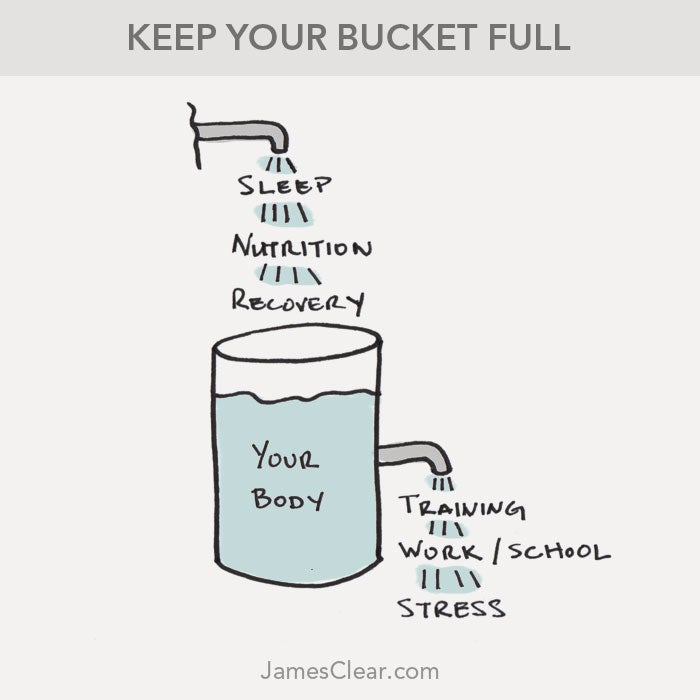 The forces that drain your bucket aren’t all negative, of course. To live a productive life, it can be important to have some of things flowing out of your bucket. Working hard in the gym, at school, or at the office allows you to produce something of value. But even positive outputs are still outputs and they drain your energy accordingly.

These outputs are cumulative. Even a little leak can result in significant water loss over time.

The Theory of Cumulative Stress

I usually lift heavy three days per week. For a long time, I thought I should be able to handle four days per week. However, every time I added the extra workout in, I would be just fine for a few weeks and then end up exhausted or slightly injured about a month into the program.

This was frustrating. Why could I handle it for four or five weeks, but not longer than that?

Eventually I realized the issue: stress is cumulative. Three days per week was a pace I could sustain. When I added that fourth day in, the additional stress started to build and accumulate. At some point, the burden became too big and I would get exhausted or injured.

In extreme cases, like that of my professor, this snowball of stress can start to roll so fast that it pushes you to the brink of death. But it’s important to realize that cumulative stress is something that you’re dealing with even when it isn’t a matter of life or death. The stress of extra workouts or additional mileage. The stress of building a business or finishing an important project. The stress of parenting your young children or dealing with a bad boss or caring for your aging parents. It all adds up.

Related: How Smart Do You Have to Be to Succeed?

If you want to keep your bucket full, you have two options.

Recovery is Not Negotiable

I’m in the middle of a very heavy squat program right now. (It’s called the Smolov squat program. If you’re interested, I put the spreadsheet up here.)

I’ve spent the last two years training with really easy weights and gradually working my way up to heavier loads. I’ve built a solid foundation of strength. But even with that foundation, the weights on this program are heavy and the intensity is high.

Because of this, I’m taking special care to allow myself additional recovery. I’m allowed to sleep longer than usual. If I need to eat more, so be it. Usually, I’m lazy about stretching and foam rolling, but I have been rolling my little heart out every day for the last few weeks. I’m doing whatever I can do to balance the stress and recovery deficit that this squat program is placing on me.

Related: This 'Rule' Can Help Uncover Your Creativity

Because recovery is not negotiable. You can either make time to rest and rejuvenate now or make time to be sick and injured later. Keep your bucket full.

7 Tips to Avoid Burnout When Growing a Business

You Don't Have to Quit Your Job to Combat Burnout