How One Man Made It His Business to Give Back

Michael Amberg always knew he wanted to own a business, but when it came to finding the right one, he drew on his experience as a volunteer rather than his professional time in sales. “I’d always worked with young kids through church,” he says, “and I just knew I had a passion for it.”

He found what he was looking for in Amazing Athletes, an educational sports franchise that emphasizes motor development and confidence-building over competition. Amberg opened his Tulsa, Okla.-area franchise in 2008.

“I absolutely love it,” he says. “I don’t feel like I’ve worked a day at all in the last seven years.” In that time, he’s gone from a one-man operation to overseeing a staff of three coaches, bringing the Amazing Athletes program to 30-plus schools and approximately 600 students every week.

But Amberg hasn’t forgotten what led him to the franchise in the first place: volunteer work. He’s made giving back to the community an integral part of his business, starting in 2012 when he began offering free classes once a month to The Little Light House, a tuition-free school for children with special needs. 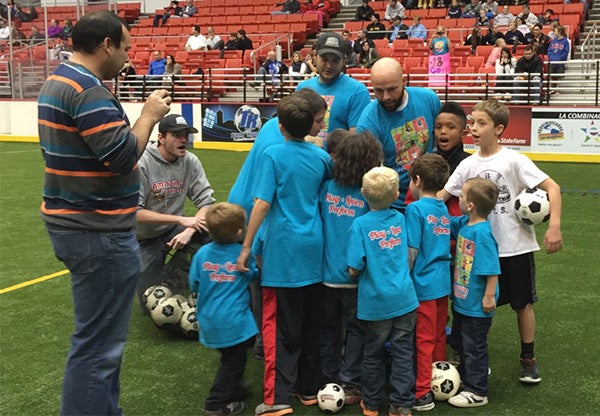 “It’s one of the things we’re the most proud of, and the most humbled by as well,” says Amberg, who was named the school’s Therapy Volunteer of the Year in 2013. We asked him how giving back makes his business better.

How did your relationship with The Little Light House start?

They approached me to come in and tell them about our program but said, “We can’t pay you.” After getting a better understanding of what they did, I told them, “We wouldn’t want you to pay us anyway.” I talked to my coaches to make sure they were all onboard with donating our time, and it was an immediate yes.

A casual observer might say, “Oh, those kids can’t play sports,” so to be able to go in and show them that yes, they really can, and to see the joy on the kids’ faces—it’s incredibly rewarding. I believe my coaches and I get more out of it than the kids do. The coaches actually request to teach at The Little Light House instead of the classes that they get paid for, which is a huge testament to the impact the kids there have on us.

Has this inspired you to give back in other ways?

Yes—just this year we started offering free classes at Happy Hands Education Center, a school for children who are deaf, are hard of hearing or have communication disorders. We’ve also partnered with the Tulsa Area Community Schools Initiative to offer classes at discounted rates at several lower-income schools. And I organize a free family fun fair three times a year in Owasso, a suburb of Tulsa.

Why is community involvement such a high priority for you?

It’s really easy to get caught up in trying to get ahead and build your business, and it’s very important, I think, to put that aside and realize how blessed you are just to own a business. I set goals every year, but I’ve never had and never will have a financial goal. The goal has always been to get more kids involved in the program. We’re making a big difference in these kids’ lives, but they’re making a big difference in our lives, too. If we didn’t give back to the community, we wouldn’t be growing and moving forward—not just as a business, but as human beings.

How the Pandemic is Driving Innovation in Sports Business

From Bad to Great: Lessons You Can Learn From the Chicago Cubs

What It Means to Be an "Intrepreneur," According to This SVP