'Shark Tank' Update: The Mensch Is Off the Bench

By Brian O'Connor December 29, 2015
Opinions expressed by Entrepreneur contributors are their own.

Another holiday season is in the books and, for Neal Hoffman, sales were down 11 percent.

He couldn’t be happier.

Related: Mensch on a Bench: How This Toy Went from Kickstarter to 'Shark Tank' in Two Years

Hoffman is the man behind Mensch on a Bench, the doll and storybook that’s becoming the Jewish equivalent of the popular Elf on the Shelf Christmas accessory. The former Hasbro toy executive worked out a story line and design by himself, and got Moshe the Mensch into retail outlets, and online. Then, just four days before the first night of Hanukkah 2014, Hoffman pitched the Mensch to the moguls of Shark Tank.

The “Shark Tank effect” that sends sales soaring for nearly any product pitched on the show -- whether the entrepreneur gets a deal or not -- kicked in. The Mensch sold out on Amazon and at retail locations, becoming the best-selling Hanukkah-related item at both Target and Bed, Bath and Beyond, Hoffman says.

“It was awesome,” Hoffman recalls. "It was crazy.” 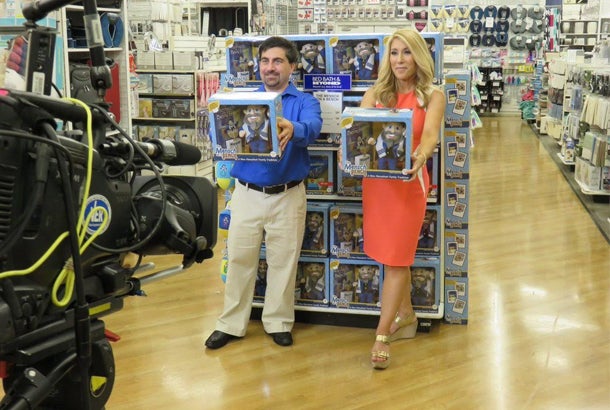 Particularly crazy because, even as the solo-preneur prepped for his big expected sales bump on the night before his episode aired, an overflowing upstairs bathtub drowned his computer downstairs. “The day before I was on Shark Tank, I spent in Best Buy, in tears,” Hoffman confides.

Besides sales, which Hoffman said hit $900,000 in 2014, he also nabbed two sharks -- software expert Robert Herjavec and retail and branding pro Lori Greiner. The two invested $150,000, to share 15 percent equity in the company, but not before Hoffman endured some harsh criticism from other sharks.

Mark Cuban accused him of looking for investors prematurely because -- in Cuban's opinion -- Hoffman had no idea how to grow the company. “It seems like you want to grow yourself into bankruptcy,” Cuban said.

Kevin O’Leary, meanwhile, deemed the Mensch nothing but a fad. “Do this as a hobby and extract a million bucks over the next few years for yourself,” O’Leary advised. “Don’t quit your day job.”

But turning the Mensch into a long-term brand and not a fad is his focus, Hoffman says, and one he shares with Herjavec and Greiner. That’s one reason the three focused on selling less of the Mensch this year. Hoffman explains that Hanukkah came early in 2015, shortening the shopping season and causing retailers to estimate that sales of holiday-related merchandise would fall by 30 percent.

That meant that Hoffman's modest drop of 11 percent -- from $900,000 in 2014 sales to what the entrepreneur estimates will be $800,000 this year -- has kept his strategy on track and avoided leaving retailers stuck with unsold Mensches.

“The only way to kill a toy brand,” Hoffman says, “is to make too much.”

Next year, in 2016, the first night of Hanukkah will actually fall on the same day as Christmas, giving Hoffman a much longer shopping season. “So, we’re still very profitable, the retailers are happy and we’re really well-positioned for next year,” Hoffman points out.

In terms of working with his sharks, Hoffman says that Herjavec has offered help with the big strategic vision, positioning the company to move into new products; these include consumables such as gift paper, gift bags and other products that are purchased every holiday season. “He’ll come in and give me nudges on the strategic direction,” Hoffman says.

For her part, Greiner has brought expertise to the crucial details Hoffman needs to succeed in retail. That has included redesigning Moshe to look a tad friendlier. On the show, shark Barbara Corcoran, who bid but lost on investing in Mensch, told Hoffman, “The doll is scary.” Greiner agreed, so, for 2015, the Mensch became a kinder, gentler Moshe.

“I’d say that after Steve Jobs, Lori is the best product person of this generation,” Hoffman says.

Other work with his two sharks has included adding a hot cocoa brand for Mensch, piggy-backing onto the popular Elf Yourself mobile phone app, adding plush dreidels and menorahs to the product line and selling the rights to a Mensch on the Bench cartoon.

Hoffman also is working with Greiner to add  Hannah the Hanukkah Hero, a female mensch with her own role in the story of the Jewish miracle of the temple oil that lasted for eight days.

While he strives to be a low-maintenance partner for his two sharks, Hoffman says he was unsure when he walked off the Shark Tank, set just how it would all work out.

“When you walk out, you really don’t know what it’s going to be like,” says Hoffman, who marvels that a millionaire such as Lori Greiner spends hours on the phone with him, tweaking the details of the business. “We’re all leaving each other to do what we’re good at. It’s a really nice partnership.”