This Eyewear Startup Was Turned Away by 10 Factories. Two Years Later, Its Frames Will Be in 500 Stores.

When Konrad Billetz was looking for a manufacturing partner for his interchangeable eyewear startup, he turned to Alibaba.com to search for factories. He hoped he’d find one that would help him make glasses with lenses that would pop in and out, allowing customers to snap a single pair of lenses into any number of frames.

“People kept telling us no,” Billetz says in a conversation with Entrepreneur. The 30-year old entrepreneur, born and raised in Coeur d'Alene, Idaho, now lives and works -- proudly -- in Cincinnati, Ohio. “I would say at least 10 factories said, ‘we can’t do it.’ Or didn’t want to work with us.”

Billetz eventually did find a manufacturing partner. A small Italian factory at the base of the Swiss Alps, about 45 miles outside of Milan, agreed to work with him. The eyewear startup that Billetz founded, Frameri, is still working with that Italian factory today, among others. The craftmanship is top notch, though sometimes there are communication struggles. It’s possible, posits Billetz, that the factory agreed to work with Frameri not entirely understanding what the goal was.

“Honestly, I don’t think that they had any idea what we were really trying to do until about four or five months into it,” says Billetz. “There is the language barrier, obviously.” Developing the early prototypes required sending a lot of digital prototype sketches back and forth. 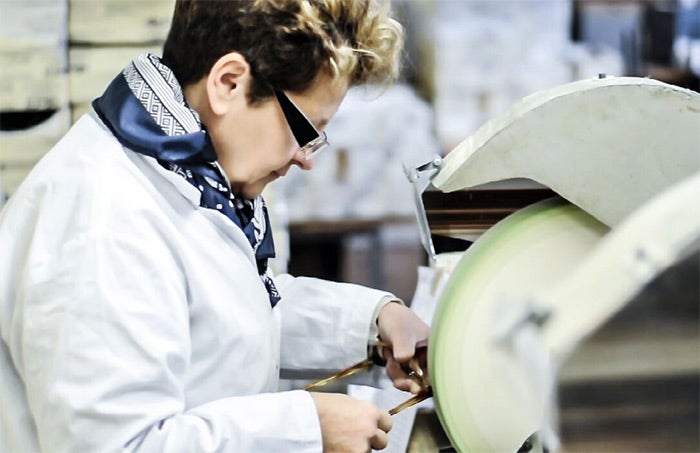 The early resistance from manufacturers was a temporary slowdown, but not entirely surprising, Billetz says. If the shoe were on the other foot, he would have had a hard time agreeing to take on this newfangled product idea. “We didn’t have a name to us, and when you are nothing, nobody wants to work with you. And when you are trying to do something that is more difficult in a space where you are nothing, it’s difficult to work with you,” he says. “I mean, I wouldn’t want to do it! Would you?”

Frameri's 15-person team, including founders, corporate employees and retail staff, works out of one storefront in Cincinnati. But the company, which officially opened for sales online in July 2014, is no longer a nobody.

Billetz has been wearing glasses since his best friend accidentally shot him in the eye with a BB gun when he was 11 years old. While in business school at Notre Dame 14 years later, he realized the consumer eyewear experience could be improved. He believes there is no reason a person should have to throw away a pair of frames just because the lenses are no longer the correct prescription.

After graduating in 2013, Billetz was accepted into The Brandery, a Cincinnati-based accelerator, to pursue the idea of interchangeable lenses. In 2013, he launched and ran a successful Indiegogo crowdfunding campaign to see if there was broad enough interest in his idea to warrant moving forward. The crowdfunding campaign set out to raise $30,000 and raised twice that -- and then some. It was the green flag that Billetz had been waiting for.

A year ago, the Frameri team made an appearance on the hit TV show Shark Tank. They were offered an investment, but they ultimately declined the deal because they thought that the royalty they would have to pay would limit the company over the long-term. By the end of 2015, Frameri had raised $1.6 million in seed financing from a handful of investors, including Notre Dame alumni, former colleagues and even Steve Case, the founder of AOL. 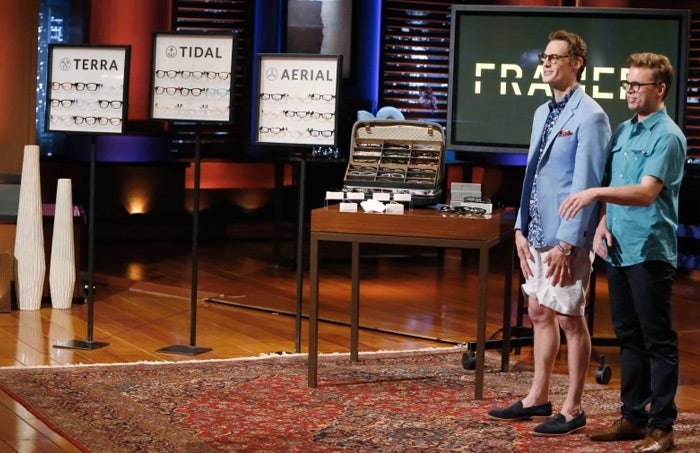 Case is impressed by Frameri’s commitment not only to revolutionize eyewear, but also to its local Cincinnati neighborhood, Over-the-Rhine. “Konrad and the Frameri team are a prime example how great entrepreneurs in ‘Rise of the Rest’ cities -- in this case, Cincinnati -- can build significant companies and change the world,” Case says in an email with Entrepreneur.

The eyewear startup recently announced a deal with Hoya Vision Care, a Tokyo-based global technology company with reach into many segments of the eye-care industry. As part of the deal, Frameri will roll out its lenses to 500 independent eyeglass retailers across the U.S. this year.

While convenience is part of Frameri’s appeal, it’s also attractive to the fashion-oriented set who cares to coordinate their spectacles with their get-ups. “My first impression is, ‘what a fun idea!’” says Karen Giberson, president of international trade organization the Accessories Council, in an email. She hadn’t heard of the company before Entrepreneur contacted her. “As a woman who wears glasses, I love the idea of being able to interchange the frames and lenses. I would like to be able to try it out and see how easy it is to use and if the lenses are secure once in ...This is the best big idea I've seen in the optical industry since the launch of Warby Parker.”

Giberson isn’t the first person to put Frameri and Warby Parker in the same sentence. Billetz, exasperated, says that he is asked about the similarity “14 times a day.” It’s a pretty logical comparison for an industry outsider. Warby Parker sells hip, fashionable eyewear at fraction of the cost of competitive retailers. So does Frameri. A pair of Warby Parker frames with prescription lenses start at $95. Frameri is a bit more expensive. Frames start at $99 and lenses start at $50 a pair.

The comparison frustrates Billetz, though. Frameri’s model is fundamentally different, in his eyes. Frameri wants people to treat their glasses as permanent investments in their wardrobes. Already, some portion of eyewear consumers are holding onto their frames: Almost 10 percent of eyewear purchases in 2015 were “lens only,” according to industry association The Vision Council. These wearers take their old frames to their optician to have the lenses replaced when their prescription changes. Frameri, by contrast, allows a consumer to pop his or her lenses in and out of frames on the go, without any tools or help. The hope is that, with this newfound convenience, consumers will begin to see frames as more of a collectable, curatable accessory, like jewelry. Alternatively, a more conservative consumer can decide to keep one set of frames even as their prescription changes.

Unsurprisingly, Billetz also says that Frameri products are much higher in quality than Warby Parker products.

But it’s not an either Warby Parker or Frameri situation. The eyewear industry has room for both.

The industry is overwhelmingly dominated by one legacy group, Luxottica, the company behind nearly every eyewear brand most consumers have ever heard of. Its proprietary brands include Ray-Ban, Oakley and Persol, and it licenses with Chanel, Dolce & Gabbana, Giorgio Armani, Michael Kors and many others. Luxottica did more than $10 billion in net sales in 2015. The Italian brand’s U.S. headquarters are, conveniently enough for Frameri, in Cincinnati, so the startup has been able to tap the braintrust of the industry it is trying to disrupt. Frameri has worked with some former Luxottica executives as consultants. 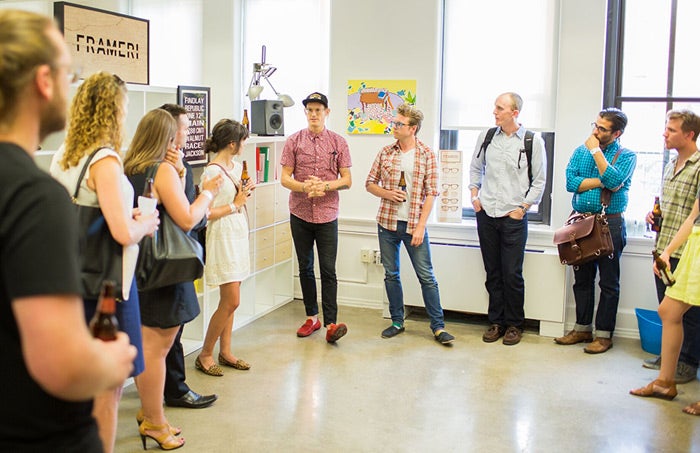 Meanwhile, the eyewear industry as a whole is expected to grow to $165 billion globally over the next six years, according to a recent estimate from market research firm Global Market Insights. The U.S. optical market was $39.8 billion, up from $37.6 billion in 2014, according to The Vision Council. That leaves room for a startup, or two. (Warby Parker doesn’t disclose revenues.)

Billetz wants Frameri to be a global brand one day. He’s got a long way to go, but he’s learning, trial-by-fire-style, about what it means to be an entrepreneur and grow a company. It’s not all glamorous. “We were living off of hot dogs and ramen, basically, and trying to get an interchangeable eyewear company off the ground, which just sounds so crazy,” Billetz says in a moment of reflection, which he admits he hasn’t had many of in the last few years.

If he could go back a few years, back when he was just getting the Indiegogo campaign off the ground, and whisper in his own ear, Billetz says he would tell himself to try to be less affected by the day-by-day roller coaster of launching a company.

“It’s more about the journey. It’s less about the destination,” he says. “I kind of wish I would have known that as opposed to getting super down or super excited. Just when you are up, there are going to be downs, and you just kind of have to roll with it.”

That, and keep pushing ahead, step by step.

“We don’t know what we are doing a lot of the time but we are always progressing and moving forward, taking it one step further,” Billetz says. “I think that’s why we are still around.”