This Entrepreneur Goes Undercover to Rescue Dogs From Torture in Asia

The annual Yulin Festival in China's southern Guangxi province is about to get underway this June. During Yulin, locals celebrate the summer solstice and hot months to come.

They do this by eating meat from an animal whose widespread slaughter by the thousands makes most Westerners gasp: dogs.

Related: Warby Parker Co-Founder on the Next Generation of Social Entrepreneurship

An estimated 10,000 to 15,000 dogs (and cats as well) are killed for the event. But it's not just their deaths that strike dog lovers as horrific, it's the torture inflicted beforehand: These animals, many of them stolen household pets, are beaten to death, skinned alive, boiled alive and disemboweled. These horrific acts are often carried out in front of other caged dogs for the psychological trauma, because locals believe that adrenaline-soaked meat tastes better and has health benefits.

American entrepreneur Marc Ching has seen these practices firsthand and is single handedly spearheading an effort to do something about it. "I’m undercover as a dog-meat buyer for 'the American Dog meat industry.' So I get to see everything that they do," Ching shared last week week in an interview.

But first, some basics: Ching, 37, runs The PetStaurant in Sherman Oaks, Calif., where he and six employees sell pet products and offer free consultations about natural health and wellness therapy for pets. "I provide a 24-hour free service for dogs and cats to keep them healthy and manage health, sickness. That's my primary thing," Ching explains. During consults with pet owners, "I do liver [illness], organ failure, kidney issues, itching, cancer, seizures, diabetes -- significant illnesses," he adds, allowing that his six-year-old business racks up $230,000 a month in sales from custom pet food and supplements. 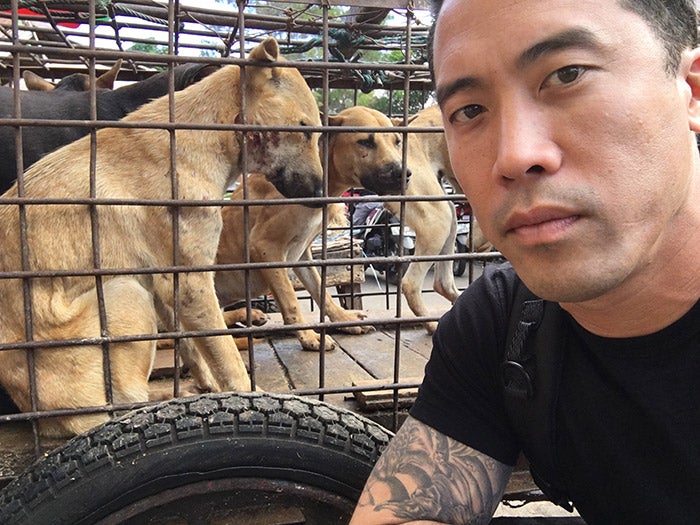 And most of those business revenues are funneled to Ching's other passion: his Animal Hope and Wellness Foundation, which he says spends about $250,000 a year to pull about 200 dogs nationwide out of harrowing environments, rehabilitate and adopt them out. "We specialize in abuse and torture," Ching says. He describes a recent case: a dog suffering a gunshot wound and a shattered pelvis from a beating with a bat. Referrals to such sad cases come from animal control/cruelty groups and Ching's website, reportanimalabuse.org.

Still, as bad as such domestic abuse sounds, most of the focus on Ching in recent weeks stems from a recent Buzzfeed article about his undercover work in Asia and the annual return of the controversial Yulin festival next month. 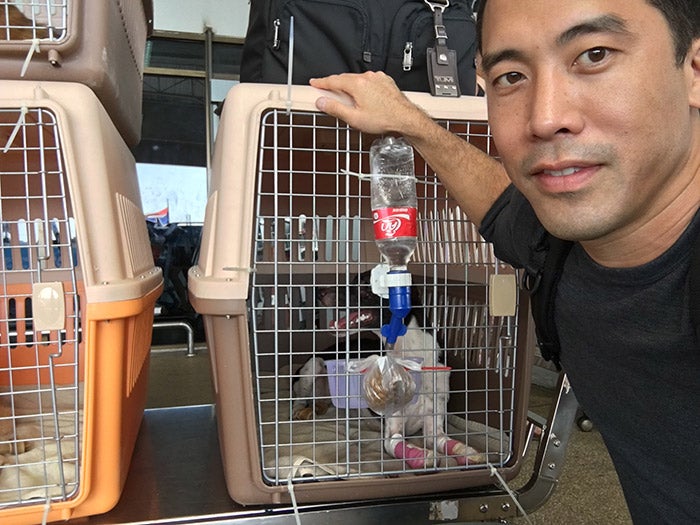 "I don't do dog farms," Ching comments. "Dog farm rescue is no different from a puppy mill rescue, in my view. Dogs just live there and eat and then they're taken to a slaughterhouse. I've been to dog farms and never rescued them because there's no abuse, no torture. What my foundation is trying to highlight is to say, 'Look, you're torturing these [other] animals; this should not be allowed.'"

Kelly O'Meara, director of Companion Animals and Engagement for Humane Society International, in Maryland, disagrees. "Marc is a remarkable person," she says, but she's quick to point out HSI's anti-dog meat work in Asia over seven years -- the group has shut down five South Korea farms and rescued 250 dogs. O'Meara shares her view that these animals suffer their own kind of torture, crammed into tiny cages with metal bars and subjected to starvation and frigid weather. "From start to finish, there's immense cruelty in the dog meat trade," O'Meara says.

Still, outright torture in other places is what prompted Ching to first visit China last September, just months after he learned about the Yulin festival. In China as in other dog-eating countries he's since visited on five more trips -- Cambodia, Korea, Indonesia, Thailand and Vietnam -- horrific treatment, like that at Yulin, is common. "They cut their feet off. They hang them. They boil them alive, rip out their eyeballs," Ching says.

He says that for his trips, he sends an advance team of researchers who find and verify the dog slaughterhouses. He then visits with a guide, driver, translator and hidden video camera. Posing as a businessman from the "American dog meat industry," he watches as dispassionately as he can manage while dogs are tortured in front of him. He tells proprietors that he wants to take the dogs back to California to slaughter them himself so he can taste the meat, fresh, before making a deal.

They fall for it. The entrepreneur gets out with perhaps five dogs at each facility, 15 slaughterhouses per trip, he says. And that's a relief, because these people normally are suspicious about -- and potentially dangerous toward -- animal rights people from abroad and their own Asian countries -- where the eating of dog meat has become increasingly disdained by young people, who have dogs as pets of their own. Ching has been beaten up at least once. 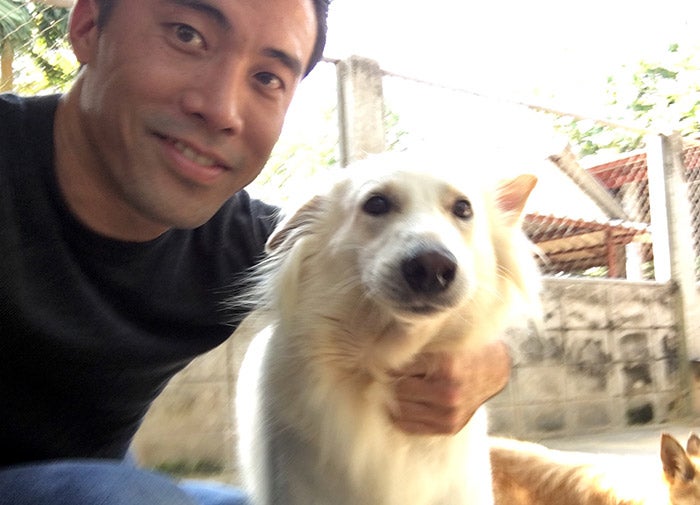 From the slaughterhouses, the dogs are taken to cities for veterinary care, crated and shipped -- if they make it. "A quarter of them survive. Three quarters die," says Ching, who notes that he's rescued 300 dogs, including many with collars that were people's pets -- but only 60 to 70 have survived. The rescues have included breeds such as French bulldogs and pugs, which sell for thousands of dollars in the United States.

The worst part of course is Ching's self-imposed requirement to witness their suffering. On his first trip to China, he watched a man throw a small dog at a wall and had to be restrained by his translator from attacking the abuser.

"The first time I watched torture was on my second trip [to China]," he says "I watched them torture dogs, hanging them and beating them. And, to be honest, when I watched it, I started crying. It wasn’t like sobbing, the tears just came from my eyes, and it changed my life."

Currently, he's planning to shoot a PSA in early June -- with appearances by celebrities, he says -- then return to Asia. "I’m only one person," Ching points out. But he hopes others will join him and emphasizes that he's talking about torture, not the choice to eat dog meat.

"I’m not in these countries to tell them not to eat dog meat. I’m there for one reason, because they’re torturing these dogs," says Ching. Asked whether he considers himself a "social entrepreneur," he answers, "Originally I didn’t make my business to do social issues, but it’s grown into that. My business does well, to where I have the freedom to do what I want, for social and charity purposes. But it’s the main funder of what I do."

There is also a personal cost for his new activism, Ching acknowledges. "It’s the worst thing that’s ever happened to me, ever," he says of what he's witnessed. "I can’t even describe it; it’s ruined my life. I’m messed up. [But] I keep going back out there because I feel I can’t stop. These dogs are being tortured, and I have to be out there until they pass a law against it."