It can be tempting to blame failure on a lack of willpower or a scarcity of talent, and to attribute success to hard work, effort and grit.

To be sure, those things matter. What is interesting, however, is that if you examine how human behavior has been shaped over time, you discover that motivation (and even talent) is often overvalued. In many cases, the environment matters more.

Related: The Downside of Work-Life Balance

Let me share an example that surprised me when I first learned of it.

The shape of human behavior

In his award-winning book, Guns, Germs, and Steel, scientist Jared Diamond points out an obvious fact: different continents have different shapes. At first glance, this seems rather unimportant, but it turns out to have a profound impact on human behavior.

For example, the general shape of the Americas is north-south. That is, the land mass of North and South America tends to be tall and thin in shape rather than wide and fat. The same is true for Africa. The primary axis runs from north to south.

Meanwhile, the land mass that makes up Europe, Asia and the Middle East is the opposite. This massive stretch of land tends to be more east-west in shape. Interestingly, the shape of each region has played a significant role in driving human behavior throughout the centuries. 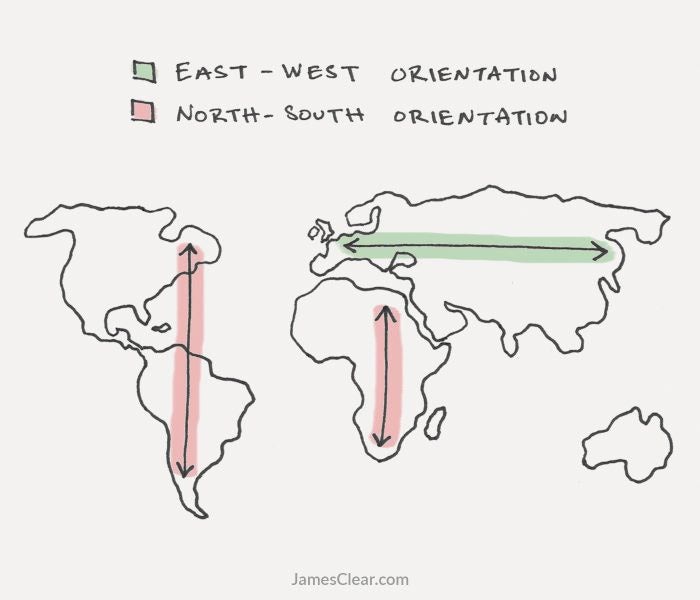 The remarkable power of environment

When agriculture began to spread around the globe, farmers had a much easier time expanding along east-west routes than along north-south routes. This is because locations along the same latitude generally share similar climates, amounts of sunlight and rainfall and comparable changes in seasons. This allowed farmers in Europe and Asia to domesticate a few crops and easily grow them along the entire stretch of land from France to China.

Meanwhile, the climate can vary wildly when you travel from north to south. Just imagine how different the weather is in Florida compared to Canada. Many crops that grow well in warm weather do not grow well in cold weather. In order to spread crops north and south, farmers would need to find and domesticate new plants whenever the climate changed.

As a result of these environmental differences, agriculture spread 2x to 3x faster across Asia and Europe as it did up and down the Americas. Over the span of centuries, this had a very big impact. The increased food production in Europe and Asia allowed for more rapid population growth in those areas. With more people, the cultures in Europe and Asia were able to build stronger armies and develop new technologies and innovations.

Related: The 3 Stages of Failure in Life and Work

The changes started out small -- a crop that spread slightly easier, a population that grew slightly faster -- but compounded into substantial differences over time. While there were other factors, it is not a stretch to say the shape of the continents was an important reason why Europeans rose to power and conquered the native tribes of North and South America, and not the other way around.

Environment is the invisible hand that shapes human behavior. We tend to believe our habits are a product of our motivation, talent, and effort. Certainly, these qualities matter. But the surprising thing is, especially over a long time period, your personal characteristics tend to get overpowered by your environment.

Imagine trying to grow tomatoes in a Canadian winter. You can be the most talented farmer in the world, but it won’t make a difference. Snow is a very poor substitute for soil.

There is no evidence that the farmers of Europe and Asia were more talented or more motivated than farmers in the rest of the world. Yet, they were able to spread agriculture 2x to 3x faster than their peers. If you want to maximize your odds of success, then you need to operate in an environment that accelerates your results rather than hinders them.

How to design a better environment

There are many ways to design an environment that promotes success.

First, automate good decisions. Whenever possible, design an environment that makes good decisions for you. For example, buying smaller plates can help you lose weight by deciding portion size for you. A study from Brian Wansink at Cornell University found that people eat 22 percent less food by switching from 12-inch dinner plates to 10-inch plates. Similarly, using software to block social media sites can help overcome procrastination by putting your willpower on autopilot.

Second, get in the flow. A few years ago, PetSmart changed their checkout process. After swiping their credit card, customers were shown a screen that asked if they wanted to donate to “help save homeless animals.” Through this single strategy, PetSmart Charities raised $40 million in a year.

You can apply a similar strategy by designing an environment where good habits “get in the flow” of your normal behaviors. For example, if you want to practice a musical instrument, you could place it in the middle of your living room. Similarly, you are more likely to go to the gym if it is literally on the way home from work than you are if the gym is only five minutes away, but in the opposite direction of your commute. Whenever possible, design your habits so they fit in the flow of your current patterns.

Related: The Evolution of Anxiety: Why We Worry and What to Do About It

Third, subtract the negative influences. Ancient farmers didn’t have the opportunity to remove the barriers that held them back, but you do. For example, Japanese television manufacturers rearranged their workspaces to save time by eliminating unnecessary turning, bending and swiveling. You can also reduce the negative influences in your environment. For example, you can make it easier to avoid unhealthy foods by storing them in less visible places. (Foods that are placed at eye level tend to be purchased and eaten more frequently.)

The luck of the environment

It is important to remember that the environment drives our good behaviors as well as our bad ones. People who seem to stick to good habits with ease are often benefitting from an environment that makes those behaviors easier. Meanwhile, people who struggle to succeed could be fighting an uphill battle against their environment. What often looks like a lack of willpower is actually the result of a poor of environment.

Life is a game and if you want to guarantee better results over a sustained period of time, the best approach is to play the game in an environment that favors you. Winners often win because their environment makes winning easier.

This article originally appeared on JamesClear.com.

Mexico is experiencing one of the most widespread and intense droughts in decades: NASA