The drones would take off from the company's trucks with an aim to more efficiently cover rural routes.

By Angela Moscaritolo February 22, 2017
This story originally appeared on PCMag

In the future, those waiting on a package delivery in a rural area might have to keep an eye on the sky instead of the road. That's because UPS may send your package via drone.

The company on Monday successfully tested a package delivery drone that launches from atop its iconic brown vans. The idea is to bring more efficiency to rural routes: the drone autonomously delivers a package to a home then returns to the vehicle, all while the driver continues along the route to make a separate delivery.

The test on Monday was conducted in Lithia, Fla., a suburb of Tampa, with the help of Ohio-based electric truck and drone developer Workhorse Group. That company built the drone and the electric UPS package car used in the test.

Here's how the system works: The octocopter drone has a cage on the bottom, which extends through a hatch into the truck. The UPS driver loads a package into the cage and presses a button on a touch screen, sending the drone to a preset address. When it's done delivering the package, the drone then docks back on the roof of the truck and recharges. It can fly up to 30 minutes and carry a package weighing up to 10 pounds. 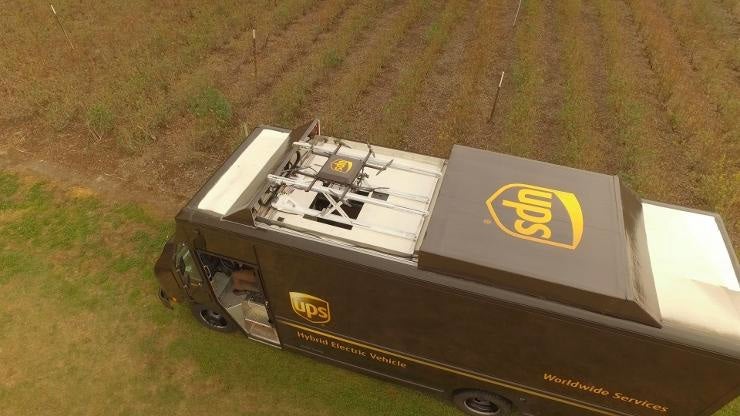 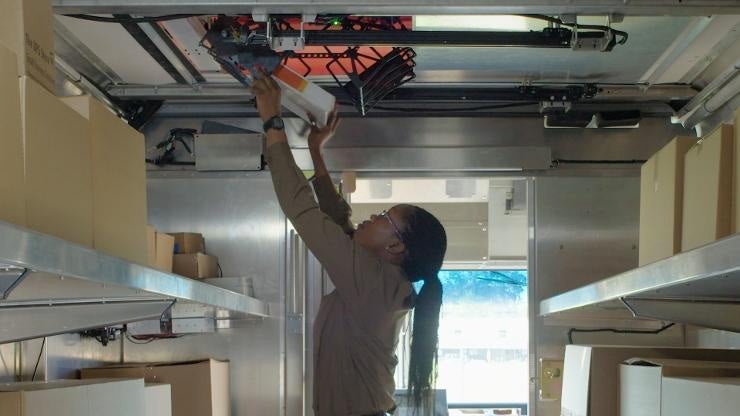 In a statement, UPS Senior Vice President of Global Engineering and Sustainability Mark Wallace said the test was unlike anything UPS has done with drones thus far. The company is already using drones to deliver blood and vaccines to hard-to-reach locations in Rwanda, but this is the first time UPS has used the technology for non-urgent residential deliveries.

The test has "implications for future deliveries, especially in rural locations where our package cars often have to travel miles to make a single delivery," Wallace explained. "Imagine a triangular delivery route where the stops are miles apart by road. Sending a drone from a package car to make just one of those deliveries can reduce costly miles driven. This is a big step toward bolstering efficiency in our network and reducing our emissions at the same time."

UPS said a reduction of just one mile per driver per day over one year can save the company up to $50 million. Rural delivery routes are "the most expensive to serve" since drivers have to go such far distances between stops. UPS is hoping drones will reduce those costs, though Wallace was careful to quell possible fears that drivers might one day be replaced altogether by drones.

"Drivers are the face of our company, and that won't change," he said. "What's exciting is the potential for drones to aid drivers at various points along their routes, helping them save time and deliver on increasing customer service needs that stem from the growth of e-commerce."

UPS isn't the only company to test this concept. Mercedes-Benz also tested a drone-equipped delivery van.