After a social entrepreneur's product flops, he learns an important lesson about the value of a strong product.
Next Article
Alexandra Zissu
Magazine Contributor
July 26, 2017 4 min read

This story appears in the June 2017 issue of Entrepreneur. Subscribe »

The first time Tyler Merrick heard about social entrepreneurship, it blew his mind. “I was from rural Texas,” he says. “I’d never heard that concept before.” Soon after, he started seeing businesses with value-specific missions everywhere: Ethos Water, TOMS, Warby Parker. He wanted in. So he left his family pet food business and founded Project 7.

Related: What It Means To Be A Social Entrepreneur

The idea was to sell a series of generic products and donate some of the proceeds to causes serving seven basic humanitarian needs, like clean water, hunger and shelter. “I wanted to be Newman’s Own 2.0,” he says. First, he’d have to learn a lesson that many social entrepreneurs overlook: People may love a cause, but that alone won’t earn their money.

Merrick began Project 7 with the most generic possible product -- bottled water -- and sold it through Caribou Coffee. Then he launched chewing gum and breath mints. At first, things went well. Buyers at large national chains like Walmart, Target and 7-Eleven liked the feel-good concept, and the products sold.

Then sales stalled as people saw Project 7 as too much about the cause instead of great products. After one purchase, the shoppers’ thinking, says Merrick, was “I already planted a tree. I already gave a meal. We had no real staying power.” To juice sales, Merrick added more items -- coffee, T-shirts. It got out of control. “There wasn’t anything special about them,” he admits.

Related: 5 Ways to Launch a Company With Staying Power

The stores carrying Project 7 agreed; they dumped the brand in 2013. He had to lay off staff. “It was awful,” Merrick says. “I didn’t want to get out of bed in the morning.” He tried looking for a new job, but he just couldn’t let Project 7 go.

While thinking of how to reboot his company, he reflected on advice from investors over the years: The product will always matter more than the cause. Back then, he was too focused on philanthropy to get it. Now he understood.

“I killed every product category I fooled around with and focused on gum,” Merrick says; it had the best chance to thrive. Big brands owned the market on mint gum, so he became the “Willy Wonka of flavor,” with unexpected varieties: birthday cake, rainbow ice, s’mores. “We worked our tails off to land deals, lived off our last bit of savings and credit lines and hoped it would turn into a profitable business model again,” he says. 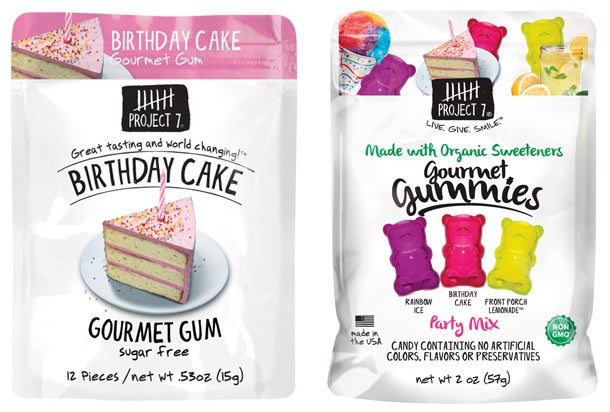 The charity part remained: Project 7 donates up to 25 percent of profits, evenly distributed to partners in all seven initiatives, including Children’s Hunger Fund and Feeding America. But it isn’t front and center anymore. “We moved the giving story to the back of the package,” he says.

Related: 3 Stories on Bouncing Back From Failure

That was three years ago. Merrick says Project 7 has grown 1,200 percent since then, though the San Clemente, Calif.-based company is private and doesn’t share sales numbers. In 2016, IRI/Nielsen named Project 7 the fastest-growing gum brand in the United States. He’s since added organic gummy bears, and is back selling across the country and Canada, from Wegman’s to Ahold to Starbucks to (once again) Target.

Merrick admits to being “still bummed” that causes alone weren’t enough. Yet he’s happy that people now truly like the product. Philanthropy is a bonus. “If that endears you to the brand, great,” he says. “We don’t want to be a pity purchase.”

Get Started and Make Your Idea Come True With Social Impact

The Wealth of 10 Billionaires Grew by Half a Trillion Dollars in 2020, While the Poor Will Take 10 Years to Recover