For Tennessee Titan linebacker Derrick Morgan, the desire to win isn't confined to the football field.

On a recent Monday night at the new Dream Hotel in Hollywood, Kevin Durant and Ezekiel Elliott bobbed their heads up and down to a live performance by Ty Dolla $ign, while hostesses dressed as sexy refs kept the champagne and vodka flowing. The club was packed with models, celebs, impossibly large athletes, and impossibly wealthy executives, all there for the VaynerSports Annual Celebrity ESPYS Kickoff Party.

Derrick Morgan, an 8-year-veteran linebacker for the Tennessee Titans, sized up the room like he would an opposing offense. When he’s not pummeling quarterbacks, Morgan invests in startups and runs his own venture business. He seemed pleased with the networking opportunities. 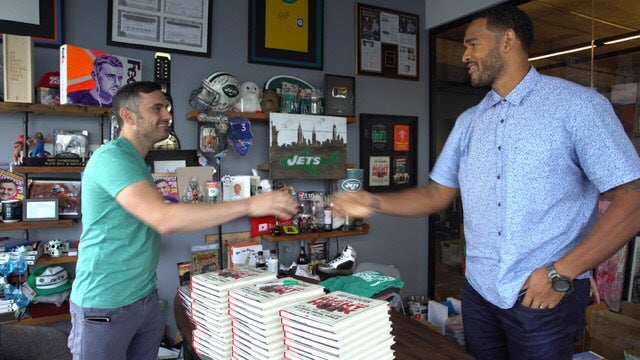 “The only thing that’s impressive to professional athletes is billionaires and CEOs, and the only thing that’s impressive to billionaires and CEOs is professional athletes,” explains Justin Giangrande, party organizer and Executive VP of VaynerSports, a full-service athlete representation agency. “Bring those two groups of people together in an environment where there’s no deliverable objective and good things come from it.” As proof, he cites an informal meeting at last year’s party between an athlete and a Verizon executive that led to a marketing deal.

This might not be the traditional way to do business—but VaynerSports is not your traditional company. Started 14 months ago by marketing gurus and industry disruptors, Gary and AJ Vaynerchuk, the agency prides itself on building their players’ brands both on and off the field. Rather than just offering show-me-the-money style contract negotiations, VaynerSports takes a “partner in life” approach—adding marketing and post-career guidance to the mix. Some of their high-profile clients include Braxton Miller of the Houston Texans, and Morgan, who signed just two weeks ago.

Related: What Gary Vaynerchuk Learned by Experimenting on Himself

Though new to VayerSports, Morgan was no stranger to the Vayner brand. Last year, he began following Gary on social media, watching his videos, and listening to his podcast. “I thought, this guy is a hustler,” he says. “He’s teaching patience and working your face off for 13 years. I respect that.”

He also respects Vayner’s entrepreneurial game. During Morgan’s rookie season, he tore his ACL and had to sit out for a year. For the first time in his life, he realized that he was in jeopardy of never playing again—and that scared him. “You always hear about statistics of players going broke,” he says. “I didn’t want to be a statistic. I realized I needed to invest in myself outside of the game.”

Morgan always had an interest in business, but he never pursued it. With nothing but time on his hands, he embarked on a one-man, business learning tour. He visited Barnes & Noble over and over, picking up all the best-selling business books. “I’d never been a reader, but I broke that pattern of playing video games and watching YouTube videos, and started to read and learn as much as I could,” he says.

Related: Gary Vaynerchuk Says Your Lack of Patience Is Killing You

Next, he grilled every successful person he encountered, including his financial advisor. “He told me that he’d never been asked as many questions as I asked,” Morgan says with a smile. “I told him, ‘I’m sorry, but I’m not sorry.’” He admits asking people for advice wasn’t easy for him. “I’m an introvert by nature, but I forced myself out of my comfort zone.”

As Morgan’s knowledge expanded, so did the quality of his network. He developed an interest in angel investing and put his money into various tech startups. He also took his business education to the next level, earning an MBA from the University of Miami.

Related: Serena Williams and the 9 Most Successful Entrepreneur Athletes

Back at the party, Morgan took some time away from working the room to reflect on his future. “In 5 to 10 years they’re going to tell me that I can’t play football anymore,” he says. “But I don’t see myself working for someone else after my NFL career.” Like the Vayner brothers, he believes being an entrepreneur is his true calling. “I like the idea of being able to have a vision and work towards it based on my own principles and values. My success is in my own hands”