The company shares the challenges it overcame to ensure everything at its drive thru aligns with its mission.
Next Article

Two years ago, grocery store brand Amy’s Kitchen decided to branch out beyond frozen meals and canned soups and into the fast-food business. The company, founded in 1987, had been receiving letters from customers for years, who lamented that freeway exit options for road trip fare were full of preservatives and genetically modified ingredients. They said they wished they could dine on Amy’s organic offerings on the go, not just at home.

After much persuading and planning, Amy’s opened its first restaurant in Rohnert Park, Calif. Located just a few miles down Highway 101 from the company’s Santa Rosa headquarters, Amy’s Drive Thru is a take on the classic American fast-food joint, with veggie burgers, fries, sodas and milkshakes on the menu, as well as soups, salads, pizzas, mac ‘n’ cheese and burritos.

Related: 8 Reasons Why Food-Related Startups Will Gain Momentum in 2018

If “organic fast-food” seems like a contraction or pipe dream, that’s because it’s not easy to pull off. The company was well aware of the challenges it faced going in, says Paul Schiefer, operations director at Amy's Drive Thru.

“Organic is such a deeply held value of Amy’s that we never thought about doing it in any other way than using organic ingredients,” Schiefer says, noting that Amy’s founding mission was to make tasty organic food “accessible” to as many people as possible in terms of price, appeal to people from all walks of life and sensitivity to dietary restrictions due to ethical concerns, health issues or allergies. The only items it serves that are not organic are vegan cheeses.

“The Amy’s brand wasn’t started to be a gluten free and vegan brand, but we have found that products that were that way have done well,” Schiefer says. “We have certainly tried to make sure that that part of the market is covered, and that people can look at Amy’s as sort of a solution if they need that.”

The majority of Amy’s Drive Thru customers have no dietary restrictions, Schiefer explains. But the company overemphasizes the importance of these offerings and is committed to making sure that customers won’t be limited in their options -- and won’t get sick from accidental cross-contamination. 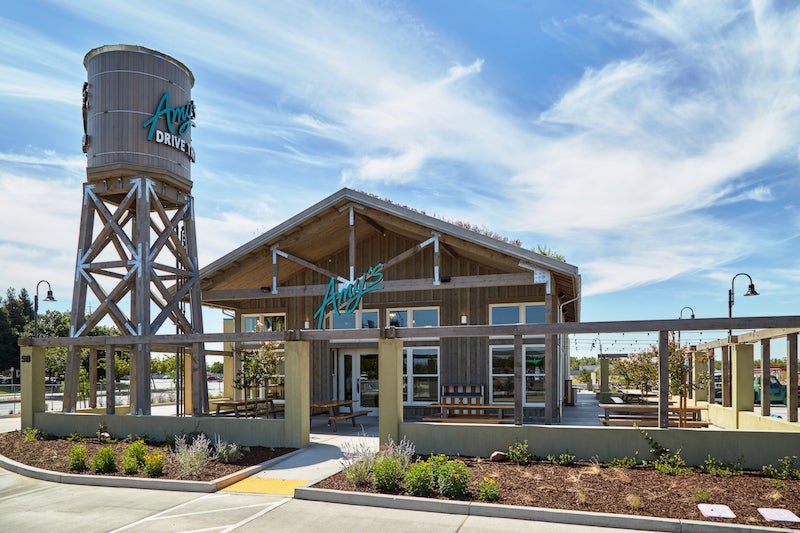 Image Credit: Amy's Drive Thru
Amy's Drive Thru opened its first location in Rohnert Park, Calif., in 2015, and is developing a second store in Corte Madera, Calif.

Although Amy’s Drive Thru operates as a separate entity from Amy’s Kitchen, the two share some of the same organic farmers and menu chefs. But building a quick-service restaurant with new dishes required many additional suppliers. It also required inventing processes based on the menu offerings to streamline operations, prevent errors and secure ingredients year round, with a major challenge being finding an organic version of every single ingredient.

Amy’s Kitchen made a name for itself over nearly 30 years, and with the Drive Thru, the brand aims to build the same level of trust with customers.

The fix
To deliver on its promise of providing organic meals with gluten-free and vegan options, Amy’s had to do a lot of work before opening its doors to customers in 2015.

Traditional restaurant distributors don’t carry organic options for all of the ingredients Amy’s sought, so the team spent years tracking them down to build its supply chain. For example, the team couldn’t find organic pickles on the market that had the acidity, sugar and crispness they were looking for, Schiefer says, so ultimately, the company took matters into its own hands. It worked with a farmer to grow special cucumbers, then brought those cucumbers to a local brinery and helped it develop an organic brining process.

“We’ve had to take a lot of stuff that would maybe only be found in a grocery store or farmer’s market level and figure out how to operationalize that into a restaurant environment,” Schiefer says.

Related: 10 Ways to Build Trust and Credibility With Your Customers

For items such as pizzas and burritos, Amy has two separate prep stations within its kitchen. The company bought two pizza ovens, so gluten-free pizzas would get their own. Kitchen tools such as containers and pizza paddles are color-coded to avoid cross contamination as well, and the packaging consumers receive their food in also follows this color pattern (e.g. blue for vegan and gluten free).

Even the point-of-sale system incorporates an extra layer of protection for folks with dietary restrictions. When cashiers input orders, they’re prompted, for each item, to note whether the customer would like a vegan or gluten-free option.

The results
Two years after the first Amy’s Drive Thru opened, the company is working on its second location in Corte Madera, Calif., some 40 miles south of its first store, and it plans to open more in the future.

“I don’t think we’ve ever honestly even studied, was there an ROI to this program? I think we just did it because it felt like the right thing to do,” Schiefer says of Amy’s rigorous sourcing and sensitivity to customer preferences. “That’s one of the benefits of being a family-owned company. You can make decisions that aren’t always strictly about financial results. You can make decisions that matter to your values.”

Amy’s Drive Thru doesn’t just have anecdotal customer satisfaction, internal monitoring and a growing footprint to demonstrate the success of its efforts. It also has a secret shopper come in multiple times a month to buy items, which are then sent out for third-party testing and verification to make sure they’re gluten- and dairy-free. Over the last year, Schiefer says, the store has had an 100 percent score on those audits, with no incidents.

“We made that commitment to our customers, so we’ve really been focused on seeing it through,” Schiefer says, noting that the company is constantly adding processes and backup suppliers. “There’s definitely a spirit of continuous improvement.”

Another take
Amy’s Kitchen, Drive Thru and other companies that have committed to organic offerings identified a consumer base that demands them. Diana Kelter, a foodservice analyst at market research firm Mintel, notes that today, 54 percent of consumers agree that “healthy” and “locally sourced” are closely related attributes, according to Mintel’s March 2017 Healthy Dining Trends report, whereas in the past, low fat, low cal and low sugar were higher priorities.

Beyond educating their staffs and designing menus in a clear and detailed manner, one crucial practice that brands seeking to build trust and deliver on promises should adopt is transparency, Kelter says. She cites Jeni’s Splendid Ice Creams as an example. When Jeni’s experienced a listeria outbreak in 2015, it kept its customers updated on how it was handling the crisis with blog posts from founder Jeni Britton Bauer herself. Prior to the crisis, Kelter says, Jeni’s had emphasized its direct line to its suppliers, so during, it was able to confidently reassure customers that it has pinpointed the source of the outbreak -- and get them to flock back when operations resumed.

Related: 5 Strategies for How to Make Customers Trust Your Brand

“A lot of times, when a restaurant has an outbreak, they might not highlight every detail of what’s happening to the consumer,” Kelter says. She presents Chipotle as a counter example in the wake of its food safety violations. “They need to go beyond those free promotions to drive back consumers. I think there needs to be more of a conversation and transparency about, ‘This is what we’re doing, these are the steps we’re taking.’”

Another way to build trust is by invoking expert authority, Kelter says. For example, Panera Bread highlights the registered dieticians it partners with to help create some of its menu items that cater to specific dietary requests. This does more than make it easy for customers to identify what to order based on their needs or wants.

“In today’s social media driven culture, so many health opinions and factors being thrown at people,” Kelter says. “Having that expert source really can make a difference in what consumers are willing to trust and lean upon, because they’re overwhelmed.” Amy's Drive Thru says it works with an in-house team of chefs and food scientists to create recipes, though it does not publicly feature these individuals.

Finally, Kelter underscores that consumers are becoming more educated about food quality. They increasingly seek antibiotic-free meats, for instance, rather than simply “natural,” and they expect companies to minimize food waste. Companies have to listen to the larger conversation.

“Because we live in a social media era where trends happen so fast, you can’t just stay afloat with what’s working now,” Kelter says. “I think you always have to be ready for what’s next.”

When This Company Stopped Selling Directly, Its Customer Base Increased by 700 Percent