Each summer, Girl Scouts of America councils host camp programs designed to familiarize teen girls with the foundations of entrepreneurship.

For most of us, “summer camp” means happy memories of cookouts and canoeing, campfires and crafts, bug spray and s’mores.

But, should your daughter journey to Camp Laurel, an idyllic spread located in the boondocks of eastern Connecticut, she can experience something more: “Camp CEO,” an annual project of the Connecticut Council of the Girl Scouts of the USA, which teaches 14-to-17-year-olds the concepts of small business near and dear to any entrepreneur's heart (and mixed in with the usual camp activities).

During an intensive two-and-a-half days last weekend, 17 girls gathered for the program's annual session, at which 12 businesswomen mentors coached their young acolytes through how to create a small-business idea, pitch it in a Shark Tank-style format and master business concepts including branding, marketing, supply chains and distribution design.

“We’re here to expose girls to possibilities and expose girls to things they may not in their day-to-day lives have the opportunity to experience,” explained Mary Barneby, CEO of Girl Scouts of Connecticut. It's one of about 14 Girl Scout councils nationwide hosting a Camp CEO style program -- in which STEM figures prominently and women entrepreneur-coaches are a key part of the mix.

“The other thing is to teach them the power of the network,” Barneby said of the young campers. “They learn that these women can really be helpful -- that they can go to an adult who will be beneficial in their lives and ask for support and help. That’s a lesson women need to learn, to be in the world: You can be bold, you can be confident; but you also need a network -- to see successful women as allies.” 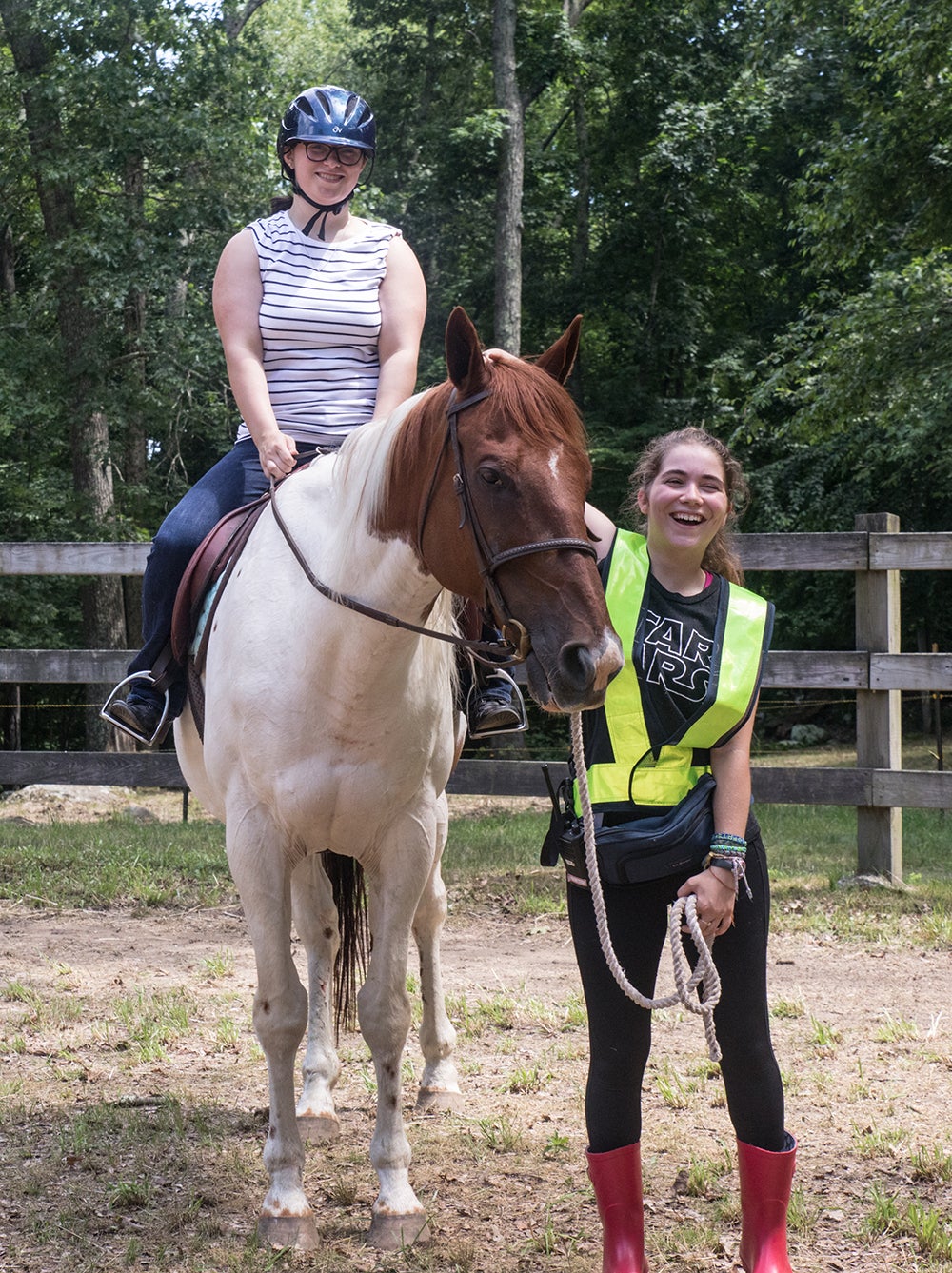 Research backs this up. A study by the Equality of Opportunity Project jointly sponsored by Stanford, Brown and Harvard universities found that the women studied were dramatically more likely to become inventors if, as girls, they had encountered female inventors.

Kara Mitchell, a business leader volunteering at Connecticut's Camp CEO, echoed this networking theme and Barneby's emphasis on teen girls’ need to find their voice during a vulnerable time in their lives, when other people's opinions, along with boys, fashion and cell phones, count so much.

“When I learned what Girl Scouts is today and how the curriculum has evolved, one of the things that was most important was teaching girls how to build that confidence in a single-gender environment,” said Mitchell, client manager at the Avon, Conn., advertising agency Mintz & Hoke.

In that context, Camp CEO is a "best-kept secret," acknowledged Mitchell, who herself attended Camp Laurel as a young girl. In fact, the Girl Scouts – an iconic organization that today tends to be (inaccurately) associated only with campfires and cookies -- has developed curriculum relevant to the digital age.

Indeed, entrepreneurship is one of its four program pillars and the basis for 29 badges awarded to girls in grades K through 12. Badges range from “Money Counts” and “Business Owner” for girls in elementary school, to “Entrepreneur,” “Financing My Dreams,” “Business Etiquette” and “Social Innovator” for girls in middle and high school. Then there's the Girl Scout Cookie Program, the largest entrepreneurial program for girls in the world.

Not to forget the camp programs: Connecticut's Camp CEO, for instance, is now in its 10th year.

That's why women-entrepreneur volunteers are so needed, for Girl Scouts' 1.8 million girl members. “I do think that women entrepreneurs are a huge opportunity for this organization,” Mitchell pointed out. Her firm, she said, is developing a volunteer-recruitment ad campaign scheduled for a rollout across Connecticut this September. Media placements and outdoor billboards are planned, all carrying the tagline, “Girls will save the world.”

Even as Mitchell spoke about saving the world, the girls inside Camp Laurel's airy service center, just a few yards away, were preparing to do just that. 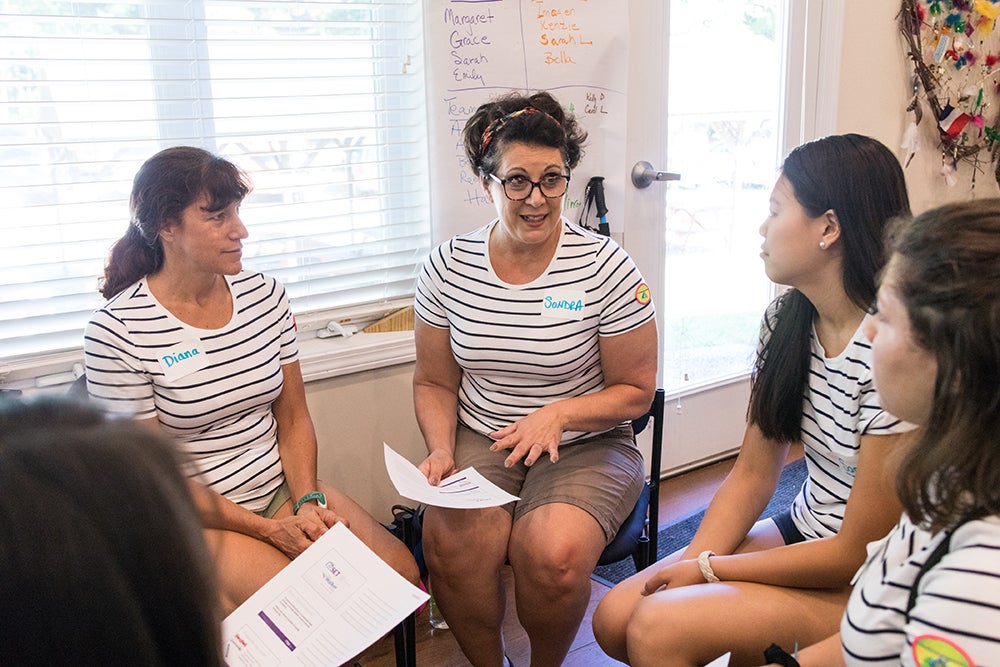 This year’s theme was social enterprise, meaning for-profit companies making a positive social or environmental impact through their profit-distribution model, their employment and supply chain practices or their actual products and services.

Ojala Naeem, managing director of reSET, a social enterprise accelerator in Hartford, walked the campers through the societal impact of a business starting up in an impoverished community: “People begin working,” Naeem said: “Crime goes down. More businesses move in. The area gets safer. When the area gets safer, more people want to move to an area. It goes on and on.”

Related: Why It Is Important to Teach Girls About Entrepreneurship

Naeem co-presented with Jessica Rich, managing partner of The Walker Group, a $7 million, 40-employee Farmington IT company which distributes a third of its profits to community groups such as reSET (founded by Walker Group CEO Kate Emery). Together, the two women talked about social enterprise rock stars such as TOM’s shoes, Warby Parker eyewear, outdoor clothier Patagonia and microlender Kiva Microfunds.

“Working with teenagers, I’ve noticed that it’s very innate to them,” Rich said during later comments about how the girls at Camp CEO had easily embraced the weekend’s theme. “If you talk about business and never mention ‘social enterprise,’ it’s very likely that they would come up with a business that has a social impact … they want to solve problems, they want to have a greater purpose.”

Of course, “business” still has to play a big part, Naeem pointed out -- hence the "Camp CEO" name. “You want purpose, but you’re not going to have purpose without profit,” she said.

Profit was a key lesson for the campers as they split into teams to create a project they would pitch to Connecticut business leaders later in the weekend. The pitch would be presented Shark Tank style, with the emphasis less about investment and equity share than helping the girls shape their concepts, and encouragement -- relevant to their age and smarts.

Those smarts were certainly on display. Past incarnations of Camp CEO have hosted the founders of the company MPowerd, which created the Luci Light, an inflatable solar light featured on Shark Tank and conceived to provide light in remote refugee camps; plus famed computer engineer Ayah Bdeir, who founded littleBits electronics, which breaks down technology, enabling anyone to build a prototype gadget.

This year’s campers, meanwhile, enthusiastically dove into 2018's social enterprise theme. One team that was observed came up with the idea of a cell phone case that could be dually charged by solar power and kinetic energy from human movement.

The social enterprise component chosen was helping students in Venezuela financially so they could stay in school, despite pressure to go to work to help their impoverished families. The clever company tagline the girls invented: “Making the Case for Education.”

Mentors for the team included Liz James of New York, who manages Google's YouTube advertising for Central and South America; Alice Ferreira, who works in corporate communications for Webster Bank in Waterbury, Conn.; and Eileen Scully, founder of The Rising Tides, which consults on women in the workplace issues.

The mentors’ role was to let the girls create their businesses themselves as much as possible, with only a little gentle adult guidance to help. 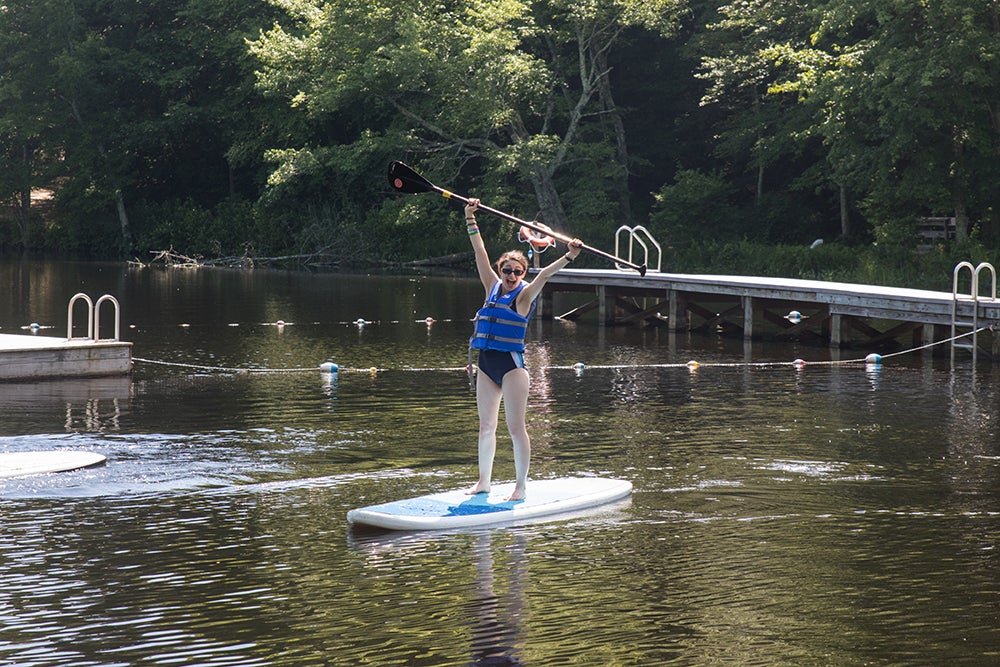 Turns out that the girls were quite capable on their own: “If I never had to plug my phone in for a year, I would pay that. I’d buy multiple phones,” declared a girl named Becca during a discussion about marketing the cell phone case, the consensus settling on a price point of $35.

From a girl named America (real name: Haley) came the comment that the case's kinetic aspect could tie in nicely to running and other outdoor activities, because: “Everybody’s in this health craze.”

Becca, who is Rebecca Berman, 14, of Avon, Conn., said in a subsequent interview that she had been active in Girl Scouts since age 5 and that she first heard about Camp CEO because, “My mom really wanted me to do it.”

The important thing was that now that she had experienced the camp firsthand, she was completely on board. “It seemed kind of cool -- all these CEOs,” Rebecca said of the mentors. “I wasn’t sure how this was going to be; it’s different from regular camp. But, I’m learning a lot of new things, and about being a leader.”