These Entrepreneurs Were Even More Energetic Than Usual: They Were at the New York Coffee Festival!

CBD syrup, highly caffeinated beans, slick machines and latte art were on display at the annual event.
Next Article

The caffeine flowed freely, and so did conversations by dozens of coffee entrepreneurs -- who perhaps talked a tad faster than normal -- at the fourth annual New York Coffee Festival in Manhattan this past weekend.

Featured at the event were booths for espresso machines, French presses and eco-friendly coffee cups, plus free tastings of every flavor of roasted bean imaginable -- as well as “latte design” demonstrations, and even coffee bean-inspired jewelry from the Czech Republic.

There was also one especially popular booth inviting coffee aficionados to swap out the simple syrup in their morning joe for syrup infused with CBD (the cannabis compound cannabidiol) -- something that’s now legal in multiple states.

“These are the people that are genuinely obsessed by coffee,” Jeffrey Young said in an interview. He’s the Australian-born founder and CEO of London-based Allegra Group, which puts on the festival in Manhattan and next month will launch a West Coast version, in Los Angeles, starting Nov. 9.

Young glanced happily back over his shoulder at the jam-packed Metropolitan Pavilion event space (with a line outside of still more attendees waiting to get in). Based on registrations, Young said he expected a total of 12,000 to 14,000 visitors over three days. These coffee devotees had come to hobnob with about 100 vendors plus their guest vendors, who included some 200 different roasting companies, Young said.

“It’s a passion for them,” Young said of the festival-goers sipping free lattes and nibbling pastries across the Pavilion’s huge expanse, or wandering upstairs to hear coffee lectures. “Somehow they like the personality of coffee, whatever that means. It’s very personal to them.

“And it’s not just about coffee itself," he continued. "It’s about coffee spaces, about the community that coffee brings.”

Related: How This Woman Perked Up Her Family's Coffee Business and Jolted Sales by 300 Percent

And the entrepreneurs? “That room is full of entrepreneurs,” Young confirmed. “These are the young coffee entrepreneurs building their businesses, some of them growing very, very rapidly. And there’s a few big businesses in there, like Breville, [and other] coffee equipment companies. But underlying this is, it’s a very entrepreneurial marketplace.”

To underscore that point, Young described the flurry of acquisitions that has occurred in the industry this year. “JAB Holding Co., a privately held company, really set the tone for acquisitions in this market,” Young said. “You’ve seen Nestle acquire [a majority stake in] Blue Bottle Coffee this year; and, local here to New York, a business created here in New York and spreading all over the country is Bluestone Lane. They’re being invested in by Stephen Ross,” the billionaire chairman of Related Cos.

In recent years, Young added, JAB acquired Stumptown Coffee Roasters, as well as Peet’s Coffee, and took a majority stake in Pret a Manger last year. JAB further led the group of investors that acquired Keurig Green Mountain. And this year, JAB was also reported to be interested in the Italian chain Illycaffe SpA (Nestle reportedly was, too); Coca-Cola, meanwhile, invested in Costa Coffee.

“What these beverage companies have realized is that coffee is the most exciting beverage at the moment,” Young said. As a result, ”Entrepreneurs are seeing these [high] valuations out there in the marketplace; and there’s a lot of interest in investment in the small boutique coffee chains.”

A stroll through the Pavilion reflected Young’s assessment, as various entrepreneurs spoke with enthusiasm about their caffeine-fueled passion:

In an interview, Eben Freeman, executive product development director, was bullish about his Massachusetts-based company’s CBD-infused simple syrup. “It solves most of the problems you have with CBD oils or edibles,” Freeman said of the syrup. That’s good, he explained, because, in a word, CBD’s natural flavor tastes like … cabbage.

What makes Azuca’s line of sweeteners, which will be available online this week and are already sold in some outlets (including company owner Ron Silver’s Bubby’s restaurants, in New York) special is their absence of terpenes. Terpenes are the hydrocarbons that give CBD products their bad smell. 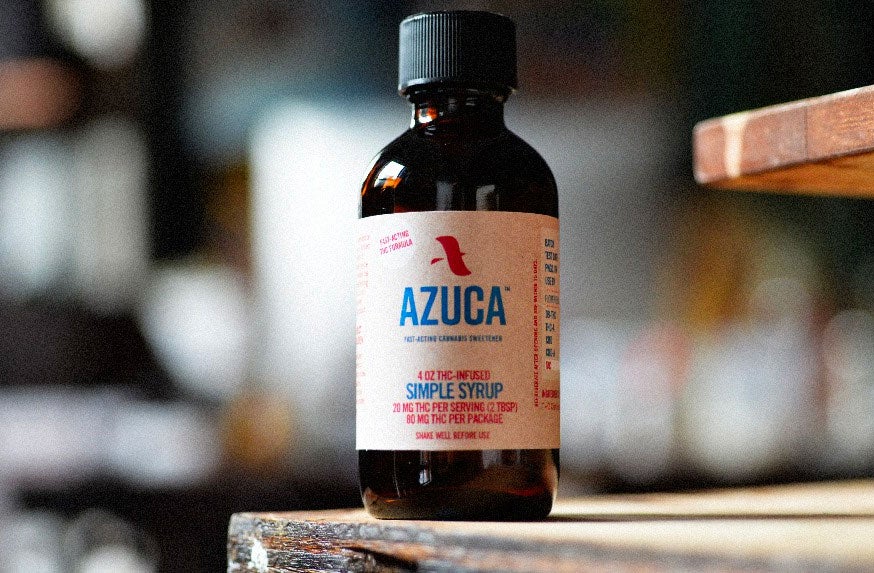 “When you put [the product] into dilution, a cup of coffee, you really don’t taste it at all,” Freeman claimed.

CBD, for those not in the know, has been credited with helping people combat depression, anxiety and chronic pain. It lacks the cannabis ingredient THC and so produces no “high.”

Azuca’s CBD syrup is sold in bottles, whose smaller version offers four servings -- each with 10 milligrams of CBD -- priced at $18. “You can put it into your coffee in the morning, into your tea in the afternoon or your cocktail at the end of the night,” Young said.

Kelly Driscoll, marketing director of the two-year-old company Biohazard Coffee, frequently had to step aside at her company’s booth to allow her colleague “Patch” to pose for selfies being taken by visitors eager to be seen with him, because he was attired in a biohazard suit and mask.

The stunt was related to the company’s name, which Driscoll explained stems from the coffee’s “928 kilograms of caffeine for 12 fluid ounces. That makes it three to four times the amount of caffeine you’ll find in normal barista-made coffee,” she said.

The company prides itself on not adding anything to the raw coffee and on using “100 percent robust” beans which, Driscoll said, strips away the beans’ natural bitterness. “For me personally, I drink three or four cups of coffee a day,” Driscoll said. “So, instead of having three to four cups a day, I have one in the morning and I’m good to go.”

“In the U.S. we’re by far the strongest” coffee, Driscoll continued, while acknowledging that a competitor could beat Biohazard at its own game. “That’s the thing with highly caffeinated coffees,” she said. “Someone could always come out with something stronger.”

“My name means ‘to be calm,’ which I’m not,” declared Rachael Calmas, referring to her career as a publicist who promotes a company making espresso machines. Specifically, Calmas works for the Australian food equipment company Breville, whose U.S. headquarters, for 15 years, has been in Torrance, Calif.

The company’s focus is on kitchen machines for the home market -- such as countertop electric pizza ovens offering pies with a wood-fired taste -- as well as espresso machines for coffee-adoring Americans.

Some of those stainless steel works of art were on display at the Coffee Festival. Breville’s most recent machines, the Oracle Touch and Barista Touch (both automatic and manual), each won a “Best New Product” award at the Specialty Coffee Association Expo.

Coming out next month is Breville’s newest machine, the Bambino-Plus, a $500 mini espresso machine. It’s joining a crowded market -- one, Calmas said, that boasts machines that are beautiful “statement” pieces for your kitchen counter, as well as machines for the “smart home” category, “where you have a phone [and tell it] ‘Make my coffee before I get out of bed.’” Breville’s products are the medium between those two extremes, Calmas said.

The real key to a good espresso? Not just a fancy machine, the publicist acknowledged, but “the right texture of milk" -- and that’s not easy to get every time. “Honestly,” she added, “the highest-fat whole milk is going to give you the best quality.” Of course it's the machine's steam-wand techology that gives the proper barista-quality milk texture.

David McLagan, founder and CEO, explained how he founded Ecoffee Cup, an eco-cup company, back in 2014, “when we found out that over 100 billion single use cups go to landfills.”

His company is English and Dutch, and based in London and Amsterdam, but it’s establishing a U.S. foothold, in Brooklyn, N.Y., soon.

The company’s eco-cups -- which come in 100 different designs and four different sizes -- are made from a composite of bamboo fiber, cornstarch and resin. The cups offer the same durability as ceramic and also the ability to hold temperatures stable for 45 minutes. The $11.76 cups are phthalate-free.

Cafes, McLagan said, are willing to put their coffee in customers’ own eco cups; Starbucks gives a 10 cent discount.

Interestingly, Ecoffee’s website boasts the relatively new extension “eco” on its name. Companies have to apply for the honor of using that “eco” extension by providing an impact statement and environmental credentials.

At the festival overall, environmentalism was a concern voiced not only by Ecoffee Cup but by Project Water Fall, a British nonprofit whose mission is “to bring clean, safe drinking water, sanitation and education to coffee growing communities”

Latte artists -- the folks who put those cool cinnamon designs on your latte foam -- have the souls of entrepreneurs in that they’re out to push the envelope and throw their heart into their work.

The Association holds a monthly New York-based “throwdown” among baristas, and is part of a wave of such competitions nationwide, said organizer Lanny Huang.

Huang equivated latte art to “plating a dish” meaning the art upscale restaurants engage in to create a beautiful dinner plate. “Latte art is pouring a design over a latte, and the skills involved have a lot to do with texturing whole milk correctly,” he said.

“Basically, latte art has grown and specialty coffee has grown because it’s kind of a signature of elevating the coffee experience,” Huang said, pointing out the La Marzocco espresso machine behind him. As a matter of fact, that company thought enough of the Association’s efforts to sponsor its festival booth.

10 Deals for Entrepreneurs Who Love Coffee

Enjoy World-Class Coffee at the Push of a Button

How Does That Independent Coffee Shop Survive?