'Curious why I think FB (Facebook) has too much power? Let's start with their ability to shut down a debate over whether FB has too much power,' the presidential candidate said in response to the political ad takedown.

By Michael Kan March 12, 2019
This story originally appeared on PCMag

Senator Elizabeth Warren's call to break up Facebook because the company has too much power was met with an ironic response on Monday: The social network decided to pull several of her political ads.

The ads had been promoting Warren's recently-announced plan to split up Facebook, Google and Amazon for their dominance over the internet sector. But the social network reportedly decided to take down the ads, not for their content, but because they used a corporate logo, a Facebook spokesperson told Politico.

However, the social network was quick to backtrack on its decision. "In the interest of allowing robust debate, we are restoring the ads," the spokesperson added. 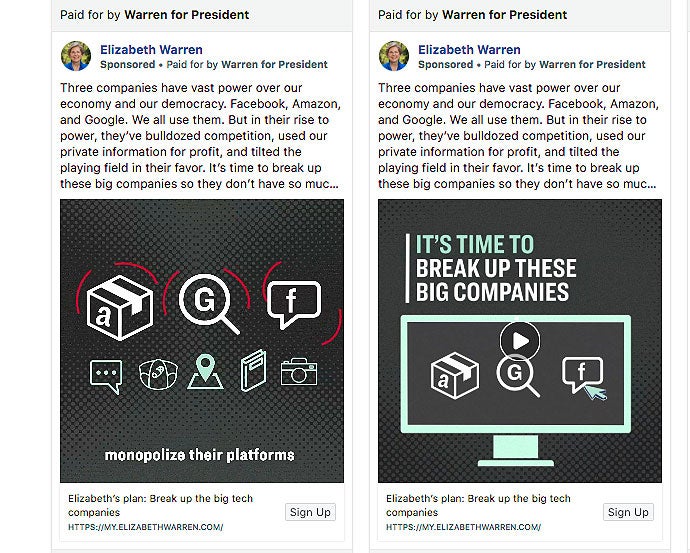 So far, the company hasn't elaborated on the whole incident, which comes as Warren is running for president. But Facebook probably reverse coursed after realizing the ad removal was only proving Warren's point about the company having too much control over the internet.

"Curious why I think FB has too much power? Let's start with their ability to shut down a debate over whether FB has too much power," Warren said on Twitter in response to the news. "Thanks for restoring my posts. But I want a social media marketplace that isn't dominated by a single censor."

According to the social network's own archive, Warren began placing the ads calling for the break up of Facebook on Friday, when she announced her plan to split up the three internet giants. The particular ads in question feature a video that briefly uses the "f" symbol inside a dialogue box to symbolize Facebook.

The "f" may seem innocous, but the company's advertising policies on "brand usage" specifically ban employing the letter as a symbol meant to reference Facebook. "Back in the bad old days, advertisers would often invoke Facebook as a feigned endorsement," explained Antonio Garcia Martinez, a former Facebook ad targeting manager, on why the policy was put in place.

It isn't clear if any other political ads were affected by the brief takedown. Facebook didn't immediately respond to a request for comment.

Editor's Note: This story has been updated with more information about Facebook's ad policy.