One in Four People Have a Fake Social Media Profile Somewhere

Besides bogus social media profiles, a recent survey also found that many people admit to lying on housing applications, resumes and dating profiles.

By Eric Griffith November 21, 2019
This story originally appeared on PCMag

Can you really trust anyone? Background checks aren't quite the norm yet even in all forms of business, but they're getting there. And based on how much people admit they'll lie to get a residence, a job, or a date, maybe that's a good thing.

In a new blog post, A Secure Life—which helps people find security systems—wrote up the results of a 500-person poll conducted in September 2019 via Pollfish. People who were self-employed or unable to work weren't eligible. 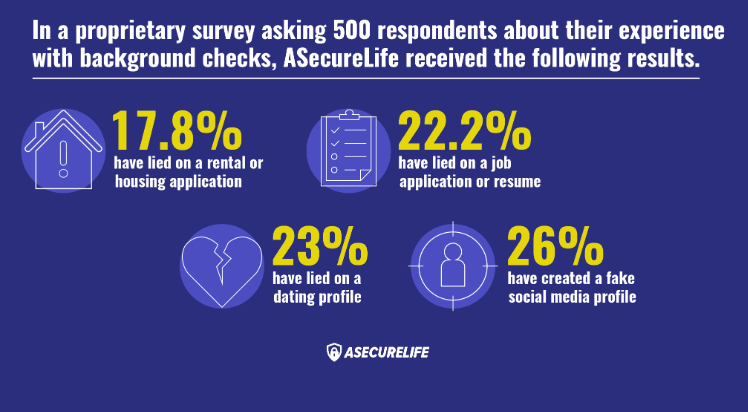 The chart above, delving into the percentage of lies told, show the tip of the iceberg. That 26 percent of people have created at least one fake social media profile is bad enough, even though it's not a huge shock. But the lies on dating profiles, job applications, resumes, and housing applications show people are desperate to get what they want.

Related: How a Digital Detox Saved My Career

The results of the poll also dig into how much background checks are being used to combat this culture of lies. For example, 2 percent of respondents said they'd done a background check on themselves to get started. Four percent have done them on a spouse or partner; another 4 percent backgrounded a potential date.

Also, 38.4 percent of respondents have gone so far as to do a background check on someone using a public sex-offender registry website. The majority did it to check up on a neighborhood, school, or workplace; but about 22 percent were checking a specific person.

Read the post for more as well as to see A Secure Life's top recommendations for the best background check companies. And read PCMag's Best Employment Background Check Services.