Don't Obsess Over the Obstacles, Says the Founder of Schmidt's Naturals

Jaime Schmidt built and sold Schmidt's Naturals for millions. Her advice: Don't focus too much on the challenges ahead. Just get going.

By Liz Brody Updated: November 10, 2020
This story appears in the April 2020 issue of Entrepreneur. Subscribe »

The brand story is almost too perfect: One day in Portland, a 31-year-old woman stands in her kitchen, eight months pregnant, DIYs a natural deodorant, pours it into a mason jar … and turns it into a multimillion-dollar business acquired by Unilever for nine figures. No sweat. Or if there is sweat, it smells like ylang-ylang, or maybe rose.

Well, not quite. Jaime Schmidt didn't have a business plan in 2010 or VC funds ever. But she knew who she was, and that propelled her through the handicaps and copycats, the hard decisions and costly mistakes, the broken machines and crumbling products, on the way to building Schmidt's Naturals into a personal care line sold in Walmart, Target and Costco. Today, she's still involved in Schmidt's, but she also has a new book, Supermaker, an investment firm, a website that supports underrepresented founders … and a passion for telling entrepreneurs this: It's never as easy as it looks.

You started by selling your natural deodorant jars at farmers' markets, and customers were literally in your face. How valuable was that?

Very valuable. And being in Portland, it's such a discerning market of customers. They want the cleanest, healthiest product, and they know what they're talking about. I learned very quickly that I needed to 100 percent know what was going into my deodorants and be able to speak to every aspect of each ingredient, including where it was sourced, because these customers wanted those details.

So Portlandia is true.

That's so funny. Definitely parts of it. They actually did a little spoof — it was this commercial for Mother's Sun Deodorant, made from all "the stuff that doesn't do anything." Then [Portland Monthly] had a quiz called Truth or Portlandia? And the true one was Schmidt's deodorant. So we were really part of that culture for a while.

By 2012, you were making natural lotions, sunscreens and soaps, but you then decided to eliminate everything except deodorant. Why?

I just knew in my heart that to really have an impact, I had to do one thing and do it really well. I was getting slack from those close to me, like my husband, saying, "People love your lotions; you can't get rid of them." But I felt a lot more confidence approaching buyers and customers with one thing, and I knew that deodorant is where the opportunity lay. It was very new to the industry. There was certainly a need for it. It would have been a lot more challenging for me to make a case for my soap or lotion.

You never raised money. When were you first profitable?

The first couple of years were a little messy financially, but there was always revenue. Then two years in, we went in really strong with our D2C strategy: We built a new website and ran ads to bring attention to it, and those sales really kept the brand afloat.

Tell me about the labeling machine fiasco.

That was in January 2015. The employees had been hand-­labeling for so long when we decided to buy a machine. It was a big moment. But we tried to be frugal and bought a used one — it was around $15,000 — which was a bad move. It showed up with missing parts, broken pieces; it was so old that we couldn't find a manual for it. We tried multiple technicians to try and fix it, and nobody wanted anything to do with it. A big mess. And a lesson learned.

What was another lesson?

There's an assumption that when you make something in a smaller batch, you can just scale it up. Well, when you are working in larger masses, everything changes. I learned that the hard way. Right before launch with a couple of our sensitive-skin scents, we had built all this hype around these new products, we had all these orders. And we quickly realized that the batches were just crumbling. 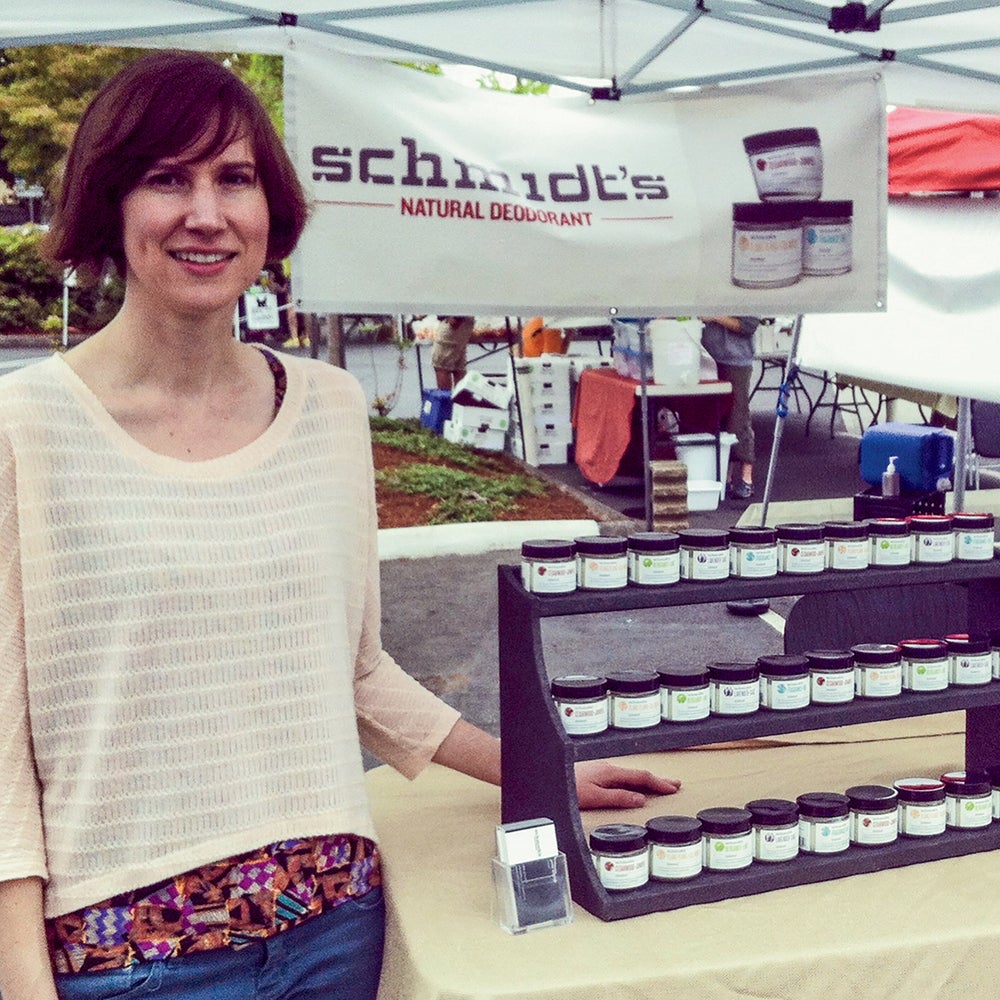 Schmidt got great feedback by launching in the local farmers' markets of Portland.
Image Credit: Courtesy of Jaime Schmidt

What did you do?

We had to pull each ingredient until we could see exactly what the problem was. We figured it out, but there were definitely a lot of costs that went into it and disappointed customers, because we'd started shipping them out before we realized they were crumbling. We thought we'd done the proper tests, but we clearly needed to do more scaled tests!

As you've scaled as a business, how have you dealt with the copycats and competition?

It's been an ongoing struggle. The first time [I saw] a woman with a deodorant table at one of the farmers' markets, my heart stopped. I was like, This can't be. I am the deodorant person of Portland. When you see someone pop up like that, you can't help but feel you may have inspired the idea in them. She came over and asked if I wanted to trade products. I was friendly and said no. Later, I realized the value in competitors bringing awareness to the category, because there was still this reputation that natural deodorants didn't work or were for a niche consumer. If their product worked well, maybe people would be willing to try mine. There was one brand in Europe, though, that was blatantly ripping us off. We ordered an injunction. They removed the products from the shelf.

When did you start thinking about selling?

It never entered my mind until we were approached in 2017.

And by then, Schmidt's Naturals was in about 14,000 stores in more than 30 countries?

Yeah. We'd had 400 percent year-over-year growth from $1.5 million in 2015 to nearly $25 million in 2017. And once we started getting interest from investment firms and big CPG players like Unilever, I realized we were actually at the point where we could use some new thinking and momentum behind the brand. But it was important to me that I stay connected. Unilever understood the value in our branding and marketing team and didn't have any interest in trying to undo it. We have a really good relationship. I'll be pulled into some of the brainstorming sessions and operate mostly as their spokesperson.

Related: 10 Grants You Need to Know About for Your Woman-Owned Business or Organization

So now you're on to new projects, like your Supermaker website. Is that something you plan to monetize?

Our big goal is to tell stories of founders and feature brands that otherwise might not attract the notice of the press yet, and we try to prioritize underrepresented entrepreneurs. We had no plan to monetize it up front, but we're looking at that now.

Your investment fund, Color, seems to have a similar mission, focusing on underrepresented founders.

Yes. It's so trendy to get these sexy headlines for a funding deal. But I challenge people: Is that really the right move? Or maybe you just need to make a strategic hire. Or maybe a consultant. Having the experience of Schmidt's, which I truly bootstrapped, I understand that money is not always the answer.

So many entrepreneurs start a business because they see a white space or a business opportunity. What else do they need to have in those early days?

I really don't think you can compete without real passion. There's also a level of naivete I think that was really helpful. If I had been too informed of the competitive landscape and everything else, it would have really been intimidating. Of course, you can only get away with that naivete for so long. But in those earliest days it was beautiful — and critical to our success.