More than one million Americans filed for unemployment insurance last week as the coronavirus pandemic continued to spur layoffs across the nation.

The figure raised the 12-week total to 44 million, meaning more than one in four American workers have lost a job during the pandemic. It's also more than the roughly 37 million people who filed unemployment-insurance claims during the year and a half of the Great Recession.

Still, unemployment filings last week fell from nearly 1.9 million in the previous week. The number of new filings has declined for 10 straight weeks.

"The number of Americans seeking new initial unemployment insurance claims remains elevated months into the current crisis, despite the fact it's slowly declining as states reopen for business," said Daniel Zhao, a senior economist at Glassdoor. 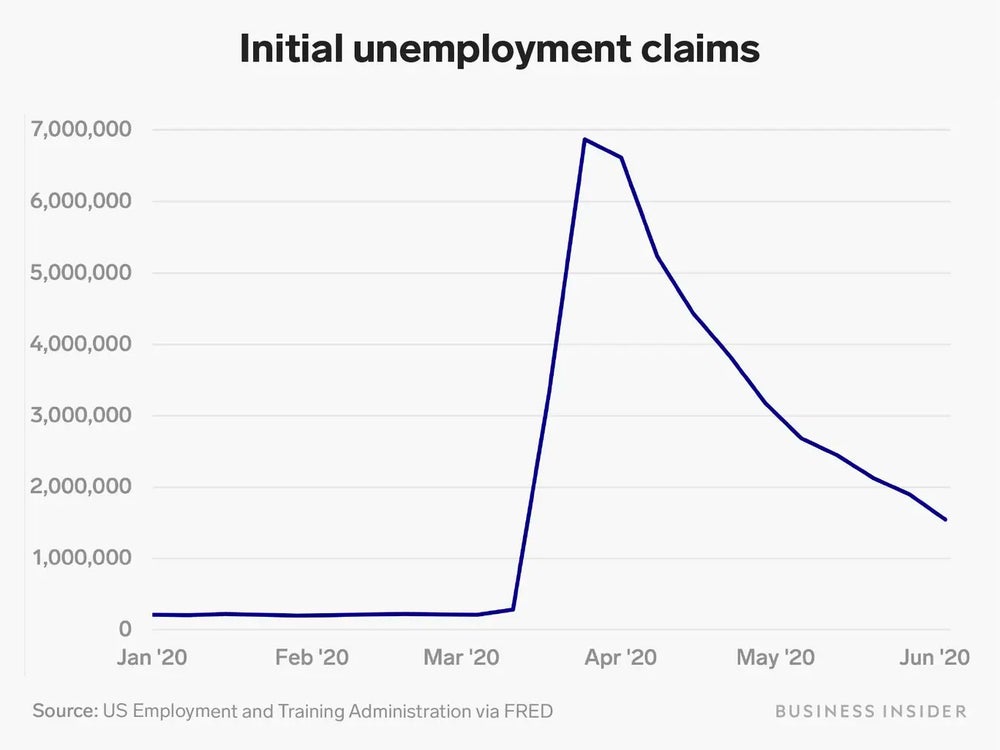 Continuing claims, which represent the aggregate total of people actually receiving unemployment benefits, were 20.9 million for the week ending May 30, down from 21.5 million in the previous report. The decline suggests that people are starting to return to work as the US economy reopens.

The U.S. also got encouraging employment data on Friday with the May jobs report. Roughly 2.5 million jobs were added during the month, surprising economists who were forecasting millions of jobs lost. Further, the unemployment rate declined, even though the consensus forecast was a spike to near-record highs.

One of the reasons economists had forecast a much worse report was that they focused on initial-jobless-claims data showing millions more applications for unemployment insurance, but not information about how many workers were being called back to work or rehired — important pieces of the puzzle going forward.

Alternate data sources have indicated that the U.S. labor market is continuing to recover at a healthy pace in June. A study from the Federal Reserve Bank of St. Louis published on Tuesday found that US employment was down 8.75 percent from January through June 5, an improvement from the 15.08 percent drop in mid-April.

Still, there are signs that a recovery may be long and slow. While some workers have been called back to their jobs, other companies are struggling with lower demand and laying off employees as the effects of the coronavirus pandemic make their way through the economy.

On Wednesday, Federal Reserve Chair Jerome Powell said millions of people might not be able to go back to their old jobs even as the U.S, reopens, which could lead to years of elevated U.S. unemployment. "It could be some years before we get back to those people finding jobs," he said.

In addition, the weekly initial-claims report has become more complicated and marred by errors — and many states are still likely dealing with backlog issues.

In the week that ended Saturday, 42 states reported 705,676 claims under the Pandemic Unemployment Assistance program, part of the CARES Act that expanded unemployment insurance to those who weren't eligible, such as independent contractors or gig workers. That was up from 36 states that reported PUA claims in the previous week.

Guy Fieri, Cable's Highest-Paid Chef, Hopes to Save His Industry With 'Restaurant Reboot'

There Are Plenty of Opportunities for Entrepreneurs in Tourism's Future

5 Small Business Strategies to Recover, Rebuild and Be Ready