I've interviewed a bunch of people over the years, and for better or for worse, I'm not jaded. I sincerely wish I was jaded because getting all nervous and adrenaline-y before every single interview can be a little annoying.

But then every once in a while, you get the opportunity to interview someone where the nerves and adrenaline aren't annoying; they are fully and rightfully justified. Such was the case with this episode of Get a Real Job. The man on the other side of the microphone? Mr. Dan Aykroyd.

For sure you know that Dan has busted ghosts, lead Chicago police on high-speed car chases and hawked Bass-o-Matic fish blenders on TV, but did you know that besides all of these iconic comedy moments, Dan is also the founder of the award-winning Crystal Head Vodka?

Related: How Kevin Hart Went From Being a Comedian to the Guy Who Owns Comedy

I love, love, love getting to talk to people and find out how they got an idea out of their head and into reality. We sometimes forget that before Bill Murray uttered that perfect phrase, "He slimed me," Dan and his co-writer Harold Ramis sat at a typewriter and plunked those words into being. And that before that iconic skull-shaped vodka bottle took a spot on your local liquor store's shelf, it was simply a notion in Dan's noggin.

It was a genuine privilege to chat and explore the mind of Akyroyd, who is as insightful and inspirational as he is just flat-out nice. We discussed the nuts and bolts of his business, as well as the more spiritual side of doing something that genuinely fulfills you. Oh, and if you are looking for a last-minute gift idea, I could not recommend more highly Crystal Head's latest offering: Onyx. It comes in an amazingly cool glossy black bottle and is made with Blue Weber Agave sourced from a single farm in Mexico. It's like vodka with a touch of tequila. I could give you all kinds of snobby tasting notes, but I'll just say that it is damn delicious.

Thanks for listening, and one final note to Dan: Thanks for sending me a bottle of Onyx, and could you send another? 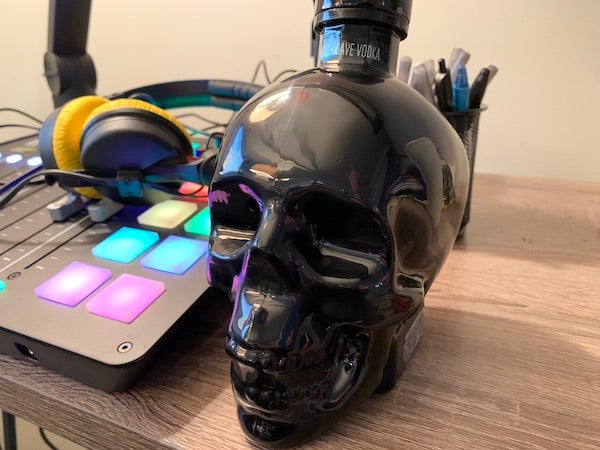