"That Vegan Teacher" had her account deactivated for multiple violations of the social network's policies, including making "blatantly racist, intolerant and discriminatory statements against anyone who does not see veganism as she does."

February 25, 2021
This article was translated from our Spanish edition using AI technologies. Errors may exist due to this process. Opinions expressed by Entrepreneur contributors are their own.

Kadie Karen Diekmeyer, better known on her networks as “That Vegan Teacher”, had a cumulative of more than 1.7 million followers on the video platform TikTok, until the moment of her blocking.

According to the New York Post , the account was deactivated for multiple violations of the social network's policies, including making "blatantly racist, intolerant and discriminatory statements against anyone who does not see veganism as it does," according to read in the petition on Change.org signed by more than 20,000 people.

In addition to the controversial content, the document indicates that she posted several videos “dangerous for children” showing explicit depictions of the death of animals.

BREAKING NEWS THAT WILL MOST DEFINITELY CHANGE YOUR LIFE: That Vegan Teacher banned from TikTok. According to disclaimer on TikTok, she was banned due to multiple Community Guidelines violations. pic.twitter.com/1Y0hDX1ZKG

The petition also details the ways its content violated community guidelines on the social network. Statements by “That Vegan Teacher” include telling someone with a disability that they would be better off if they were vegan. Also, she told a boy that he would not go to heaven because he was not vegan. In another video, she encouraged a 9-year-old boy to become vegan behind his parents' backs.

To finish the document, they branded the content of the tiktoker as "morally and ethically disgusting" and "dehumanizing". 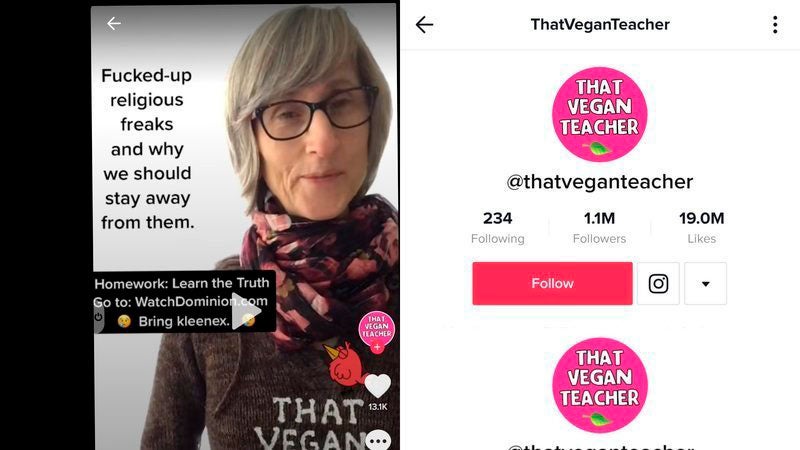 The same outlet comments that Kadie is challenging her audience to stand up in her defense through a video onYouTube , titled: 'Censorship: Why Good People Should Get Up and Speak Up' .

"Many of you woke up this morning to find that my account was banned on TikTok, and I know many of you are jumping for joy and thinking that this is a great victory," she explained in the video.

Then she added, "In a way, it makes you smile to know that an animal rights activist is being silenced."

In her defense, she denies the accusations against her by stating that she never stalked anyone, or forced anyone to be vegan, and neither did anyone get sick or die because of her. She also proclaims that the "vegan phobia" is real, since she declared that she had received death threats, that people left animal body parts outside her house, as well as receiving eggs and even that they tried to steal her dog.