Today's article features the SPY and is a continuation of Part 1's the "4Things You Need to Know About China's Potential "Lehman Moment." Read on to a...

By Adam Galas September 24, 2021
This story originally appeared on StockNews

Today's article features the SPY and is a continuation of Part 1's the "4Things You Need to Know About China's Potential "Lehman Moment." Read on to access this Part 2 article.

In part one of this series, we looked at why the potential collapse of Evergrande was roiling China's stock market, and causing concerns among global investors about a potential "Lehman moment".

Now let's take a look at what's likely to actually happen, and what it probably means for your portfolio.

It's important to understand the difference between long-tail risks like an Evergrande contagion turning into another global financial crisis, and the most likely outcome, which is far less dramatic.

The government is likely to step in due to how important Evergrande is, according to analysts.

“Evergrande is such an important real estate developer, and it would be a strong signal if anything happened to it,” said Dan Wang, an economist at Hang Seng Bank. “I believe there will be some supporting measures from the central government, or even the central bank, trying to bail out Evergrande.”

China is well aware that bailing out large financial companies creates a moral hazard because it could lead to even more speculation in the future.

The most likely endgame is now a managed restructuring in which other developers take over Evergrande’s uncompleted projects in exchange for a share of its land bank,” Williams of Capital Economics said in a note last week." - CNBC

AllianceBernstein puts the size of Evergrande in context.

Despite Evergrande’s size – we all know it is the largest developer in China, probably the largest in the world – [it] still accounts for only 4% and now it’s even less of the total annual sales market,” Zeng said. “The debt, particularly the onshore debt, is well collateralized.” - CNBC

On its own, a managed default or even messy collapse of Evergrande would have a little global impact beyond some market turbulence,” MacAdam said in a note Thursday.

“Even if it were the first of many property developers to go bust in China, we suspect it would take a policy misstep for this to cause a sharp slowdown in its economy.” - CNBC

In other words, the difference between Lehman and Evergrande is that Lehman owned a lot of worthless assets, specifically derivatives. Evergrande owns hundreds of acres of prime real estate that can be used in a managed default.

No that won't likely save investors in the stock, which is likely headed to zero. But it should prevent this from becoming a cascading failure that torpedos China's economy, and then spread to the rest of Asia and even global banks.

Remember that Fitch estimates that global banks could lose up to $100 billion. That sounds like a lot, and indeed for individual banks, the losses could be painful.

But during the Global Financial Crisis the value of credit-default swaps that brought capitalism to the brink of ruin, was estimated at over $1 quadrillion.

In other words, Evergrande, even in a total default, would likely represent about 100X less damage than what we saw in the Great Financial Crisis.

In a hard-landing scenario, several emerging markets are vulnerable," he added. "But in general, the global impact of swings in Chinese demand is often overstated." - Capital Economics

Remember the difference between Lehman in 2008 and today, is that global banks are extremely well-capitalized, and exposure to speculative debt such as Evergrande's is relatively limited.

Although the impact from Evergrande’s liquidity crisis is enormous, the good news is the fallout hasn’t started to spill over to other markets,” explained LPL Financial Chief Market Strategist Ryan Detrick.

“Short-term funding markets are acting just fine in China thus far; remember, it was the money markets in the U.S. that first started to show cracks in the system in early 2008, well before the wheels fell off.” - Lipper Financial

Remember that risk is what MIGHT go wrong with fundamentals. What actually determines whether or not a panic spreads and turns into a true contagion is how stable credit markets are in the face of uncertainty. According to Lipper Financial, a subsidiary of Reuters', there is no significant sign that Evergrande's looming default (October 24th is when it will likely miss its first bond payment) is causing a contagion that threatens China's overall financial stability, much less that of the entire region or world.

Fact 4: How You Can Potentially Get Rich From The Latest Stock Market Scare

Right now the markets are worried about many things, and so the Evergrande drama is having an exaggerated impact on everything from global stocks and bonds to even cryptocurrencies. 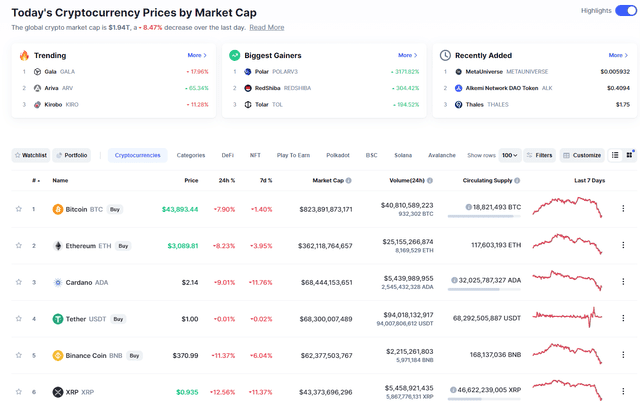 As I write this, Amazon is down over 3%, the Nasdaq 2.7%, and Alibaba over 6%. Headlines are blaring about the Dow being down over 800 points, and the CNN Fear and Greed Index is showing, not surprisingly, that investors are terrified. 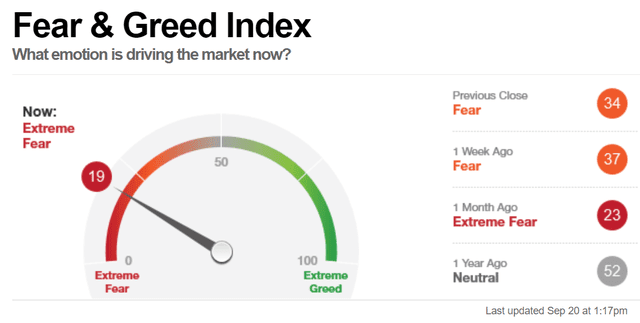 It's easy to assume that a sharp decline in the markets, with nearly all risk assets falling significantly, means something important is happening.

In other words, just because the market is selling off hard due to Evergrande and eight other risk factors right now, doesn't mean that you need to worry about your portfolio.

As long as you are using the right asset allocation and risk management for your needs, this market mini-panic is likely to not harm you in the slightest.

In fact, it could end up making you a small fortune in the future.

Consider the case of Alibaba, the most undervalued hyper-growth blue-chip on Wall Street. 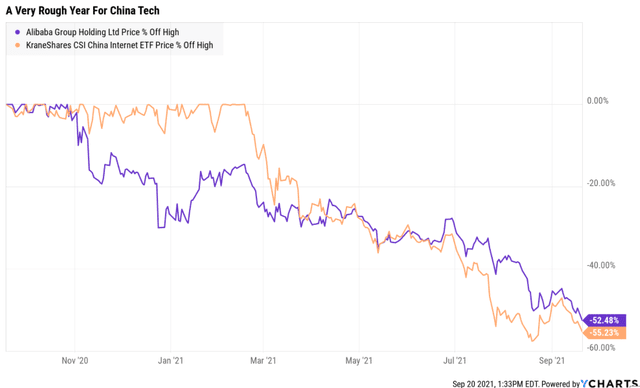 BABA is 57% undervalued as I write this, trading at just 13.9X forward earnings.

Keep in mind that since its NYSE IPO, which includes the tech crackdowns of 2015 and 2018, BABA has averaged a 31 PE while growing at about 24% CAGR.

Well, guess how fast analysts expect BABA to grow in the future? 24.6% CAGR, a consensus range that has been stable at 22% to 26% since the tech crackdown began in November. 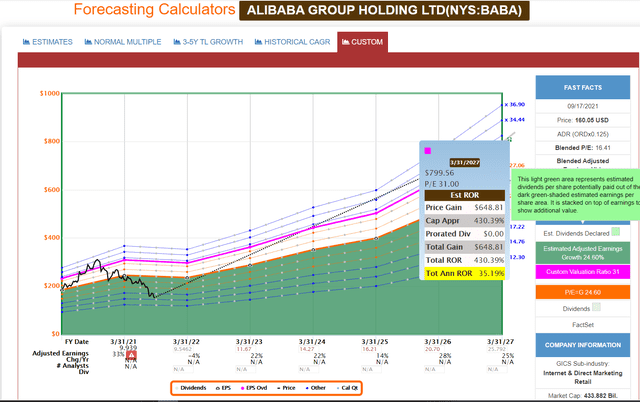 This means the potential for 430% total returns in the next five years, or 35% CAGR.

And this is just one of the most direct examples of how you can profit from the market's current worry about Evergrande.

From Amazon to British American Tobacco, to everything in between, blue-chip bargains are raining from the sky right now.

If you don't have any savings to put to work, then just sit back, and let your risk management and asset allocation do its work.

If you have savings to invest, then you have a reason to cheer, not jeer, this latest market freakout.

Waste Connections (WCN) Earnings Expected to Grow: What to Know Ahead of Next Week's Release