How to Appreciate Disney World As An Adult

Observant entrepreneurs can find plenty of inspiration at the House of Mickey. To start, look at the park's history, design, and out-of-this-world food.

By Seth Porges October 7, 2021
Opinions expressed by Entrepreneur contributors are their own.

Hot take: Theme parks like those found at the Walt Disney World Resort are more fun when you’re an adult. As a kid, you may be awestruck by the presence of a princess. But as an adult, you can really appreciate the intense attention to detail and fusion of immersive design, technology, and stagecraft that brings these worlds to life. (Not to mention the food and drink.)

As it happens, Disney World is also a huge hub for conventions of all sorts, with multiple on-site hotels that feature sprawling convention centers that likely bring in people who wouldn’t even think of stepping foot in a theme park.

This October, Disney World also celebrated its 50th anniversary—a celebration the resort intends to keep going for the next 18 months that will feature new food, merchandise, and a bunch of new rides and attractions. In other words: If you’re the kind of person who hasn’t been since you were a kid (or happens to find themselves in Orlando for a convention), there’s a lot to love about visiting these places as an adult. Here’s a starter guide to appreciating the theme parks with grown-up eyes. 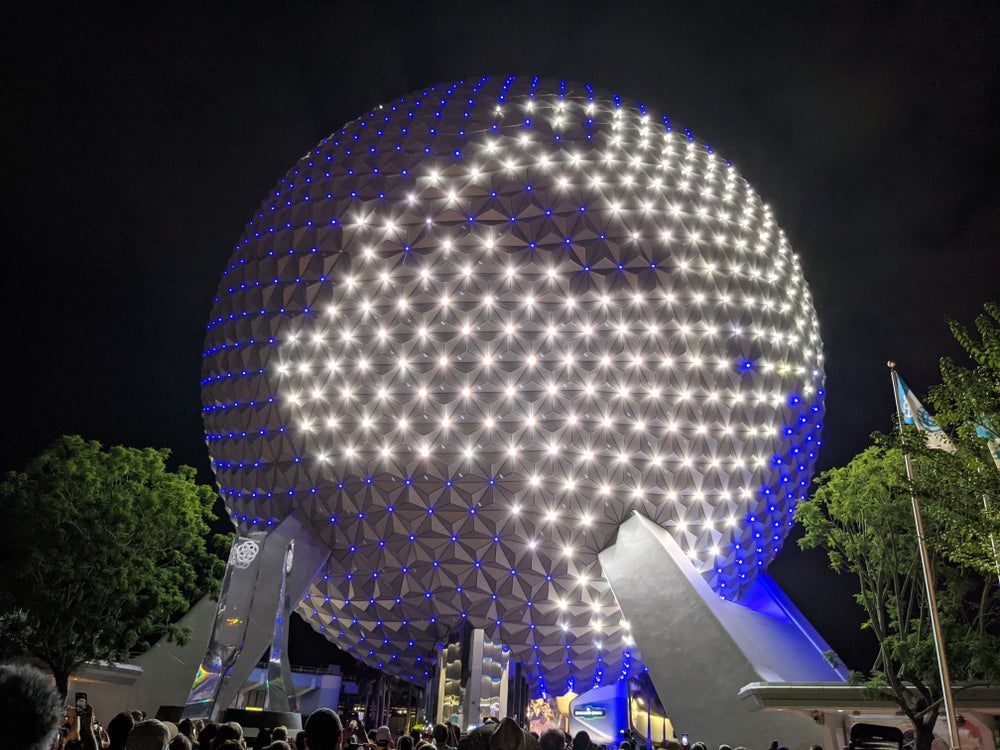 While theme parks like those found at Disney World have long acted as showcases for new technology (years before Skype, I remember my family booking a dining reservation at Epcot using a video teleconference kiosk), the bar for extracting “oohs” and “aahs” from mere technology is now impossibly high. Add on that theme park attractions need to hold their own for years to come, and Moore’s Law has a way of making a once-impressive ride feel like last year’s iPhone.

The challenge for designers such as Disney’s vaunted Imagineers is thus to create experiences that are both impressive to an audience that has easy access to an Oculus—and capable of remaining impressive for years.

The solution for modern theme parks is remarkably similar to what is currently happening in the TV and film world, where the most convincing effects (think: The Manalorian) now come from strategically mixing computer graphics with practical effects and physical sets.

It’s time to stop thinking about theme parks as children’s playgrounds, and more as temples of immersive design: Mega-budget participatory art pieces that wrap you in a cornucopia of sensory experiences designed to trick your brain and sense of presence into thinking you are somewhere you are not. An alien planet out of the Star Wars universe perhaps (you can find that at Disney’s Hollywood Studios), or James Cameron’s Avatar (Disney’s Animal Kingdom).  Screens and what we commonly think of as “tech” are one piece of this trick, but so are fake rocks, a giant full-size model of a MIllenium Falcon, mountains that appear to float up in the air above Pandora, cast members (what Disney calls its employees) who speak to you in-story, and an Easter egg-filled attention to detail that rewards repeat visits and obsessive eagle eyes.

For somebody who spent years working in design and technology, this sense of immersion makes theme parks absolutely fascinating places to visit. Not just because you can see the latest and greatest, but also because the larger parks surrounding these new immersive areas act as multilayered archaeological sites; with 50 years of history, attractions, design decisions, and IP smashed together.

It can be a lot of fun just strolling the parks and seeing what has stood the test of time—and what hasn’t. The Haunted Mansion still relies on effects from the 1960s (when it first opened at Disneyland in California)—many of which are actually dusted-off theatrical effects from the 1800s (most notably: the Pepper’s Ghost illusion, which is liberally used to populate the ride with translucent spirits).

For entrepreneurs, there are real lessons that can be pulled from these experiences. It can be easy to get caught up in the hype of a new trick or piece of technology, without really thinking about how it will look and feel to the end user in a few years (or even months) when the shine is gone. Essays and books could be written about why rides like the Haunted Mansion and Pirates of the Caribbean still work after all these years, but it all comes down to using technology in a way that remains grounded in a larger experiential goal without drawing too much attention to itself. There’s a fine line between “classic” and “dated”, and few experiences make that as clear as rides that are still offering delight after decades of continuous operation.

As much fun as it is to marvel at attractions that have stood the test of time, there’s an undeniable thrill with seeing the latest and greatest. With the ongoing 50th Anniversary celebration as an excuse, we’re seeing a huge number of new stuff come all at once—a rare site for parks that typically make changes in tiny increments.

Epcot, in particular, is undergoing a massive transformation. The biggest changes: A new ride (Remy’s Ratatouille Adventure) that shrinks you down to a Pixar-sized rodent, and a new nighttime show (Harmonious) that uses gigantic displays of water as projection screens that accompany fireworks.

There’s also some cool tech to appreciate here. The Ratatouille ride (which borrows its characters from the Pixar film) is one of a new crop of attractions that uses trackless ride vehicles that sweep through an environment like a self-driving car. The lack of a physical track allows these rides (you can also experience the tech on the Star Wars: Rise of the Resistance and Mickey & Minnie’s Runaway Railway rides, both at Hollywood Studios) to move forward, backwards, and side to side. Sans track, these rides also offer a newfound sense of immersion and surprise, as you genuinely may not know where your vehicle is headed next. For the Ratatouille ride, these elements come together to give the ride vehicle something of a personality: A scurrying rat that is forced to crawl in and around the floor of a kitchen, avoiding both physical environmental and 3D screen-presented obstacles. The end result is that you feel less like a passive observer of events (as is often the case in older diorama-filled dark rides), and more of an active participant.

Looking to the future, Epcot is also getting Guardians of the Galaxy: Cosmic Rewind in 2022. This enormous indoor rollercoaster (one of the largest ever constructed) will feature a reverse launch and place visitors in ride vehicles that swivel so as to orient towards specific show scenes. One of the biggest trends in current ride design is to mix the story elements of a classic dark ride with the thrills of a rollercoaster. Nobody has ridden this ride yet, but if properly executed, it could represent the apotheosis of this fusion.

Lest we forget, the Magic Kingdom park also got a new nighttime show for the 50th anniversary (called Disney Enchantment). Like the park’s previous show (Happily Ever After), Enchantment uses the iconic Cinderella Castle as a massive project-mapped screen that brings animated characters and scenes to life along with music and fireworks. Still, the show’s neatest feature involves extending this effect to the turn-of-the-century storefronts that line the park’s Main Street USA section. It’s positively wild seeing buildings that have stood there since the park first opened 50 years ago light up in new and interesting ways. Perhaps more than anything else, this effect represents the fusion of old and new that makes these parks so interesting for an adult in 2021. 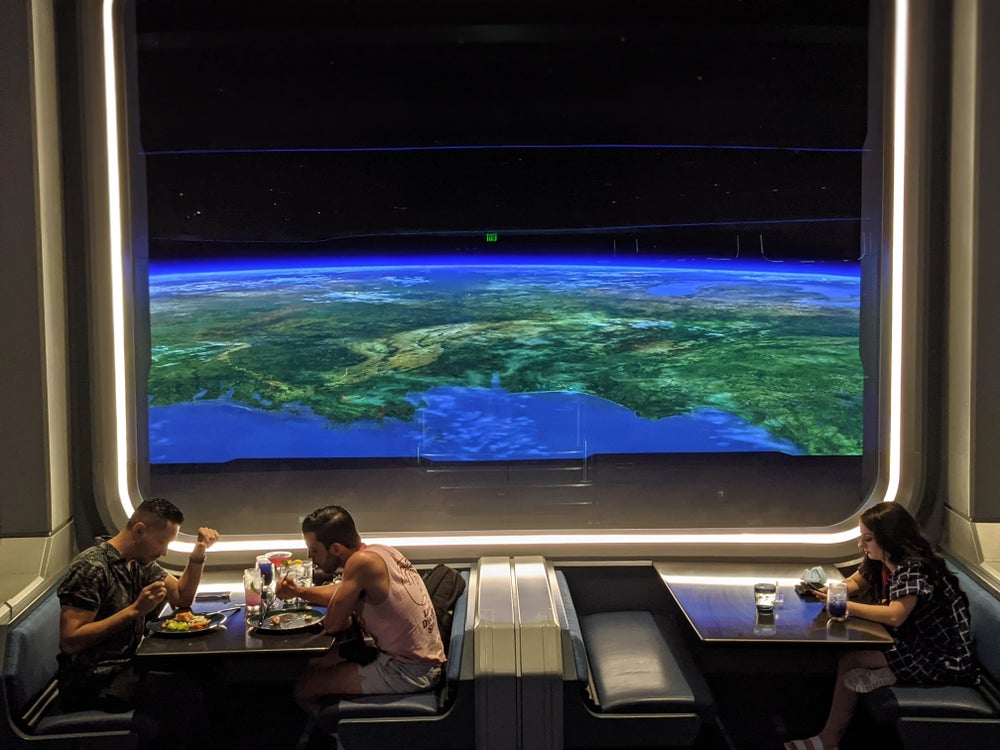 Sure, you can still fill up on churros and turkey legs; but if you haven’t been to Disney World in decades, you're apt to be shocked at the food of it all. Both in terms of quality and experience.

The brand-new Space 220 restaurant at Epcot is as much a ride as it is a restaurant, with guests ushered 220 miles above Orlando to a “space station” via a simulated elevator ride that features “windows” (ahem… super high-resolution screens) that offer views down to Earth and up to the stars. Upon arrival, more digital “windows” wrap around the actual restaurant, offering a space-sized version of what one might find eating at the Space Needle or Eiffel Tower. The experience is cool enough that the food probably doesn’t have to be good. Fortunately, it’s actually quite delicious, and the service is nothing short of stellar (or perhaps interstellar?). This is important, and keeps the whole thing feeling like the first-class cabin in 2001: A Space Odyssey—as opposed to steerage in Snowpiercer.

For those looking for less of an otherworldly experience and more of a straightforward meal, it’s really hard to find a bad bite at the Disney Springs shopping and entertainment area (basically a giant outdoor mall—and a great way to spend some time in the Disney Bubble without paying for park admission). Personal favorites include Chef Art Smith’s Homecomin’ (southern food), George’s Wine Bar (probably the best place for miles to find funky natties), and the Boathouse (seafood). You can also get a drink at an actual for-real Indiana Jones-themed bar (Jock Lindsey’s Hangar Bar).

And if you’re worried about being overwhelmed with the kiddie nature of it all: Don’t be. At night, Epcot (the most food-focused of the Disney theme parks) transforms into perhaps the world’s most unique pub crawl, with the World Showcase section of the park drawing in far more hungry and thirsty adults than princess-possessed children.

Lastly, it can be a ton of fun to look at the different ways the parks use food to further a feeling of immersion and story. The food at Satu’li Canteen in the Avatar-themed part of Animal Kingdom is designed to look like it came from an alien planet, and Star Wars fans can drink blue and green milk in the Galaxy’s Edge section of Hollywood Studios. Or, you know, stick to beer.

10 Ways Adobe Can Supercharge Your Creativity

A designer imagines what Netflix, Spotify, and other brands would have looked like in the 1980s