Latin America and the Caribbean is the region where there are more women entrepreneurs.

By Entrepreneur en Español November 19, 2021
This article was translated from our Spanish edition using AI technologies. Errors may exist due to this process.

Despite the difficulties that the COVID-19 pandemic has implied and adverse conditions such as the gender gap, in America, especially in Latin America, 24% of women are entrepreneurs. 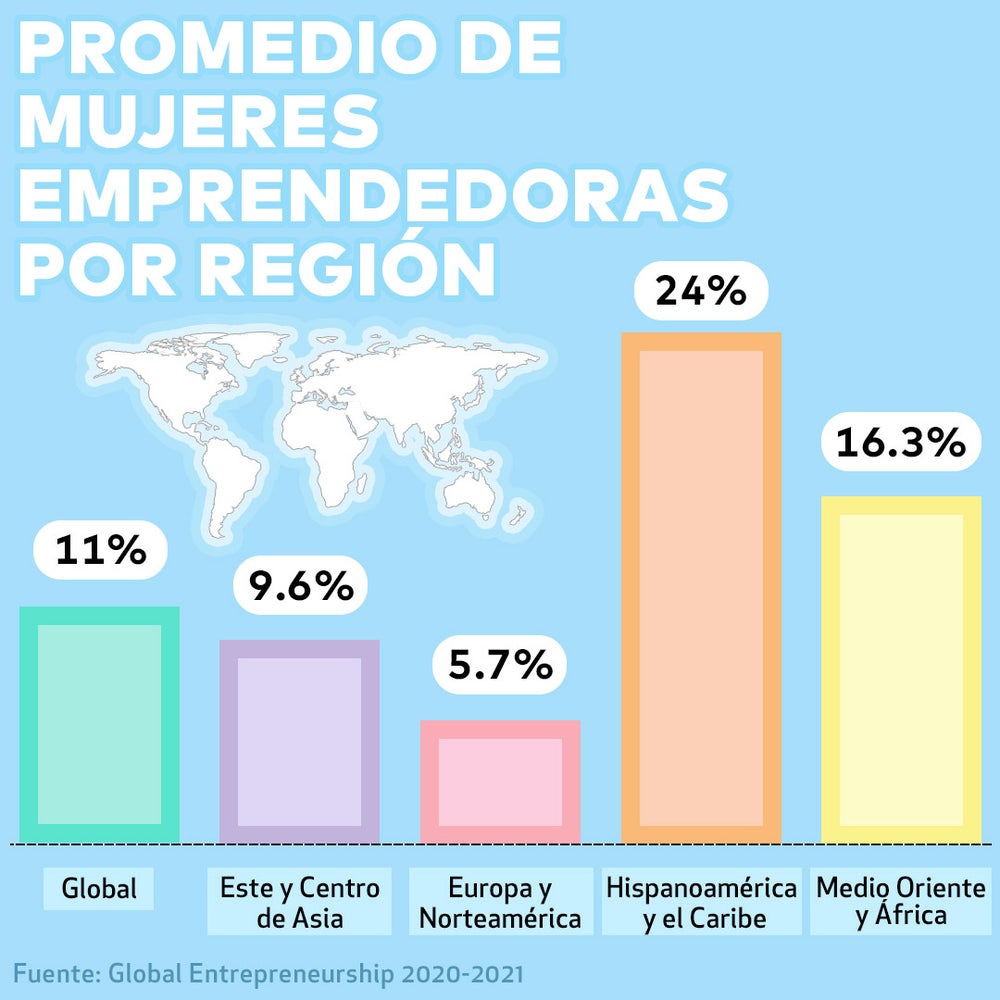 With 4 million 600,000 women who are self-employed and create companies that create jobs, Mexico ranks 4 among the countries with the most women entrepreneurs, according to the 2020-2021 study by the Global Entrepreneurship Monitor, which considered 43 countries worldwide, 10 of them from the American continent.

One of the main motivations of Mexican women to undertake is the lack of flexibility in traditional jobs, so that in this way their ventures allow them to generate an income without abandoning their activities at home.

The Mexican Institute for Competitiveness (IMCO) found that an average Mexican entrepreneur is between 25 and 44 years old, is married, has one or two children, earns 3,707 pesos a month, studied until high school and operates informally.

According to data from the National Survey of Occupation and Employment (ENOE), entrepreneurship in the average formality brings multiple benefits such as income 2.5 times higher than those who undertake in informality. The reality is that in Mexico 8 out of 10 women undertake informally, so they cannot have access to these benefits and that it becomes a factor to undertake and maintain such enterprises over time.

This lack of formality in ventures is mainly due to 3 factors: the high cost in time and money of administrative procedures, the lack of access to financing and the lack of training in finance, accounting, business development and other skills. .

The increase in informality in women's businesses became more evident from the start of the pandemic in 2020, due to the elimination of jobs and the definitive closure of businesses.

Coupled with informality, there is the fact that the number of women who manage to grow their business through the recruitment of personnel is considerably lower than that of men.

It may interest you: 5 books for unstoppable female entrepreneurs

Las nenis: the success of undertaking in the midst of the crisis.

During the pandemic, the figure of informal self-employed women who buy and sell products through social networks, called with the colloquial term the “nenis”, became popular.

Although this name sometimes had derogatory overtones, this group of entrepreneurs have been of vital importance in the flow of the local economy during the pandemic season, as data from the Laboratory of Analysis in Commerce, Economy and Business of the National Autonomous University of Mexico (UNAM), indicate that they generate about 9.5 million pesos a day in sales.

These women have managed to generate their own jobs and sometimes for more people, have increased their autonomy and have contributed to the economy of their homes. UNAM data show that thanks to these undertakings 13 million families have income.

Digital platforms such as WhatsApp, Instagram and Facebook have been of great help for children, because through these means they offer their products and close their sales. They also make use of electronic forms of payment, which is why they have turned digital commerce into an alternative against unemployment

The advantage of undertaking through digital platforms is that they have not required investing in costs such as a local or others that require the opening of a physical business. The great disadvantage continues to be the lack of support and security that informality brings

It may interest you: 14 entrepreneurs who made their fortunes in the millions without help

In all the American countries, the main motivations of women to undertake were the scarcity of jobs, making a difference in their environments, the generation of wealth and the family tradition

Unfortunately, some entrepreneurships of women in America could not continue, among the main causes are the pandemic, those to obtain financing and the fact that the businesses were not profitable. 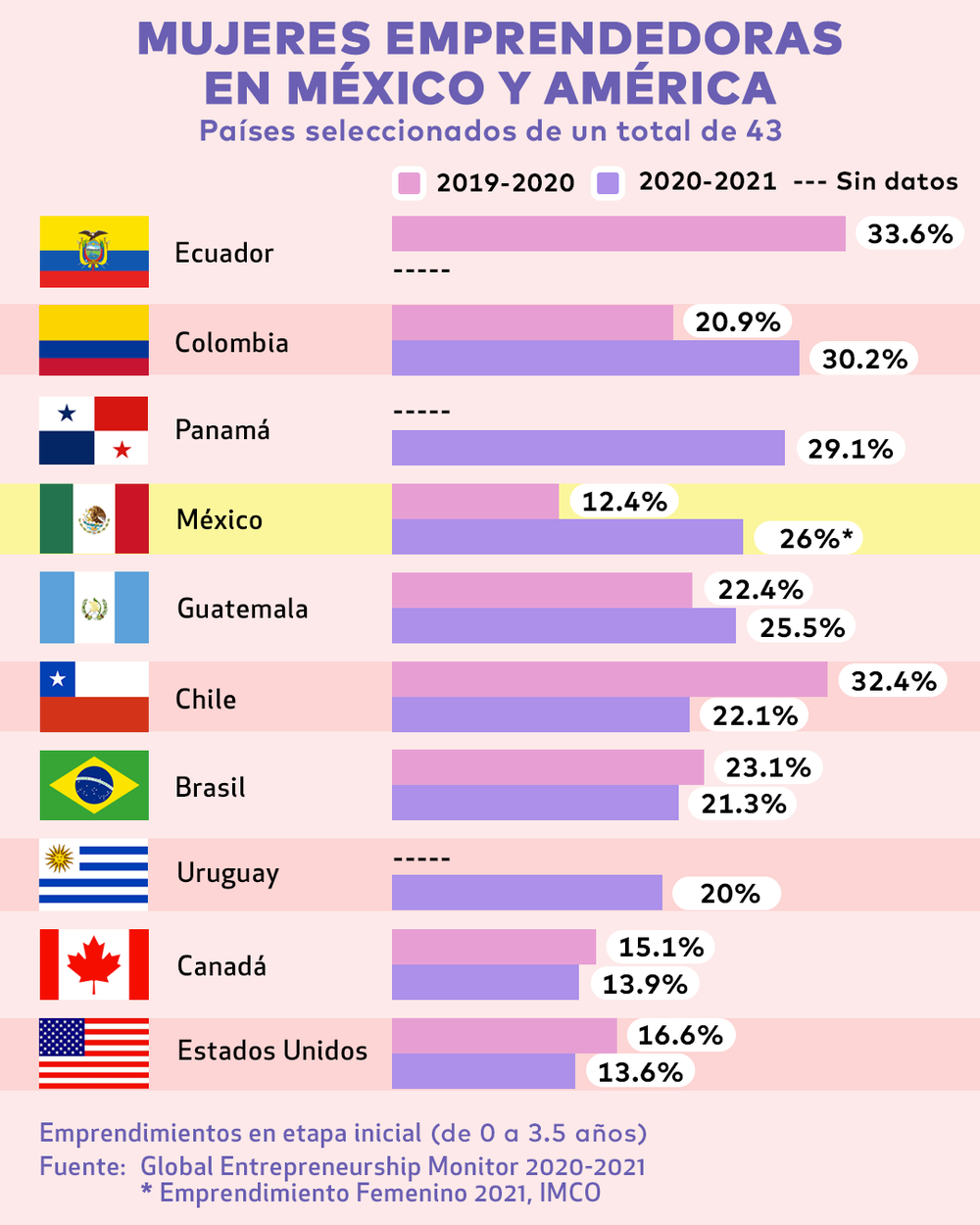 What proposals are there to increase the number of women entrepreneurs

Now that it has been seen that women's entrepreneurship, in addition to helping the flow of the economy even in times of crisis, allows them greater participation in the economy, it is important to promote these businesses so that more and more women can achieve autonomy on your income. Some of the actions proposed by IMCO are

It may interest you: 5 qualities that make women good entrepreneurs