By Phil LeBeau
May 14, 2015
This story originally appeared on CNBC

This is something frustrated frequent fliers will find hard to believe.

A new survey of the world's largest airlines finds carriers have increased the percentage of flights with seats available for reward travel.

"What I am surprised by is that we continue to see improvement year over year," said Jay Sorensen, President of IdeaWorks which conducted the survey in conjunction with Switchfly.

"When we did this in 2010 we saw 66 percent overall reward availability and now we are up to 74 percent."

That is the highest level of reward seat availability in the six years the survey has been conducted.

Second, new accounting rules mean airlines can recognize some reward program revenue only after reward travel has been taken, so there's an incentive to redeem frequent flier miles.

Finally, Sorensen thinks airlines may look to eventually spin-off their frequent flyer programs. If that happens, investors will scrutinize not only the financials but also how attractive frequent flier programs are for members.

"I think over the next five years we might see some of the major airlines spinning off their programs in the U.S.," Sorensen said. "The airlines do want to make them (frequent flier programs) look appealing in terms of investor results."

So which airlines have the most flights with reward seats open? 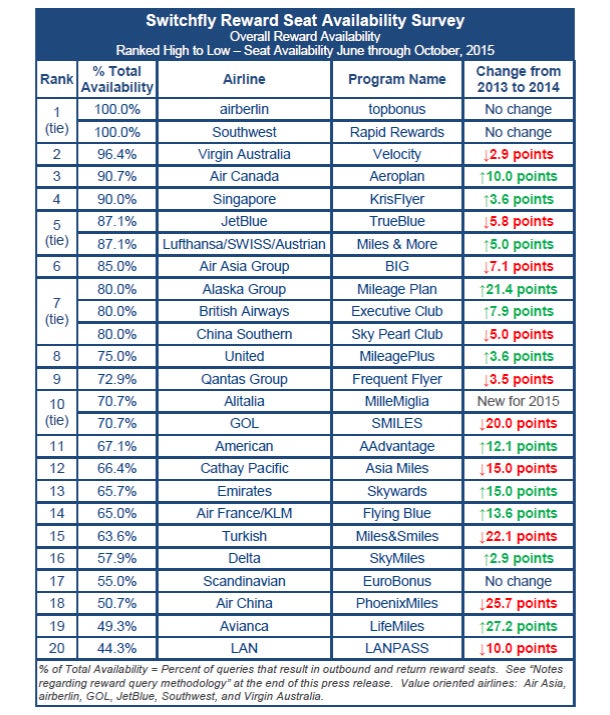 Switchfly says Southwest and the German discount carrier Air Berlin had reward seats available on every flight checked. They were followed by Virgin Australia, Air Canada and Singapore.

The three largest airlines in the U.S., American, Delta and United all increased their reward seat availability.

Caroline Boren with Alaska Airlines says the carrier has been more aggressive freeing up seats for frequent fliers, even if that means taking away seats that might be sold.

"There's a short term financial benefit to selling a seat, but there's a long-term benefit to having loyal customers if you open seats for frequent flier rewards," she said.

Even with this study showing more seats are open for reward redemption, many travelers question if frequent flier programs are rewarding enough members. Both Delta and United have changed their programs in the last year so miles are accrued based on how much money people spend on tickets, not on how far they fly.