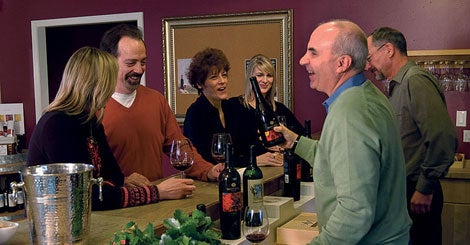 After 29 harvests and countless awards, Brian Carter, founder of Brian Carter Cellars, maintains a very clear goal for his five-year-old winery. He strives to handcraft European-style blended wines with Washington State grapes. Apparently he's succeeding since he has been twice touted as "Winemaker of the Year" by Washington Magazine, chosen as the Honored Vintner at the 2007 Auction of Wines, and is the only three-time winner of the Pacific Northwest Enological Society's Grand Prize.

"I try to emphasize the Washington State character in my wines, which often expresses itself best when the wines are reminiscent of the wines of Europe," Brian says. "Typically, these are wines that have balance--fruit, acid, and tannins in harmony--making them taste good at release and yet able to age beautifully."

Sourcing from 14 separate vineyards in five different appellations in Eastern Washington provides him an inspirational palette. He enjoys dreaming up exotic blends and giving them names to match like Byzance (French for luxurious), Solesce (Latin for sun and essence), and Tuttorosso (Italian for all red), which is a Super Tuscan. The 2004 Solesce and the 2005 Tuttorosso both earned gold honors in the Washington State Wine Competition.

Brian Carter Cellars currently greets visitors in a small unassuming yellow house, appointed with outdoor umbrella tables. But the success of its wines has allowed plans to be drawn for a new 10,000-square-foot winery, not far from where the current tasting room stands. The facility will offer guests a heated outdoor courtyard, a private tasting library, and a spacious and artfully designed public tasting room complete with full kitchen and two tasting bars.

According to Paul Gregutt, author of the Wine Adviser column for The Seattle Times, "After many years of winemaking and consulting, it is no exaggeration to say [Brian Carter's] blended wines are the best he's ever made." With Brian Carter Cellars, one man's clear goal has become a reality.

Getting There:
Located on Woodinville-Redmond Rd. (Hwy 202) next to the Hollywood Schoolhouse.