This latest move is another example of what the social network has recently described as 'a broader effort designed to get more people engaged in the civic process.'

You may already "like" a 2016 presidential candidate's page on Facebook, but the social network is now letting you go a step further by outright endorsing them to your friends. 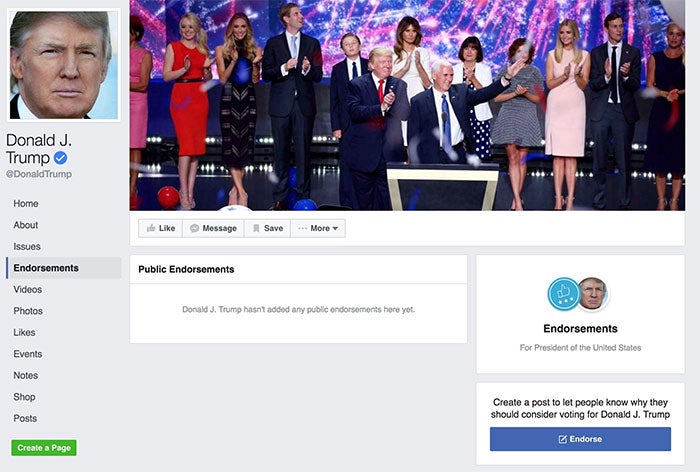 "Similar to how politicians, newspapers and organizations endorse candidates for elected office, this feature allows anyone on Facebook to do the same," Facebook's product manager for civic engagement Samidh Chakrabart told Business Insider in a statement on Tuesday. "People who want to voice their support can visit a candidate's Page, click on the endorsements tab and explain their rationale for choosing that candidate."

While Facebook users have long been able to show their support for a candidate by liking and sharing their official page, an endorsement encourages you to post a message to the News Feed explaining your support. A Facebook spokesperson said that you can choose to have your endorsement publicly visible from your profile or only to your friends. Candidates will be able to feature certain public endorsements on their page.

The spokesperson said that Facebook records endorsements only for showing friends who have endorsed a particular candidate.

This latest move is another example of what Facebook has recently described as "a broader effort designed to get more people engaged in the civic process." When Facebook showed prompts in the News Feed reminding people to register to vote, multiple states reported a significant spike in registrations.

Alex Heath is a tech reporter for Business Insider in New York City. He covers social media companies such as Facebook, Snapchat and Twitter. He also writes about the hottest apps and startups.

Before joining Business Insider in 2015, he closely covered Apple for the website Cult of Mac. He has been a guest on shows like Good Morning America, BBC World News, Marketplace Tech and This Week in Tech.

He prefers getting tips and pitches via email or Twitter DM.