Hyundai didn't roll any cool concept cars on stage at its CES press conference Wednesday. But it may have just one-upped those who did.

The car maker brought on stage something the audience wasn't at all expecting: a wearable robot it claims will let paraplegics walk again. It's called H-MEX, which stands for Hyundai Medical Exoskeleton, and it looks like a high-tech back/leg brace combination device, plus forearm crutches.

Hyun said the H-MEX is designed for people with lower spinal cord injuries, and will give them the ability to sit down, stand up, move, turn around and even walk up or down stairs. The device calculates a person's walking pace, the length of their stride, and torso tilting angle to provide "individually tailored gait pattern adjustment," Hyundai explained in a news release.

Along with the H-MEX, Hyundai during its presser described two other wearable robots it has in the works: HUMA (which stands for Hyundai Universal Medical Assist) and H-WEX (Hyundai Waist Exoskeleton). The former was designed for people with "severely limited mobility," like elderly individuals, while the latter provides upper body and hip support for manual laborers. 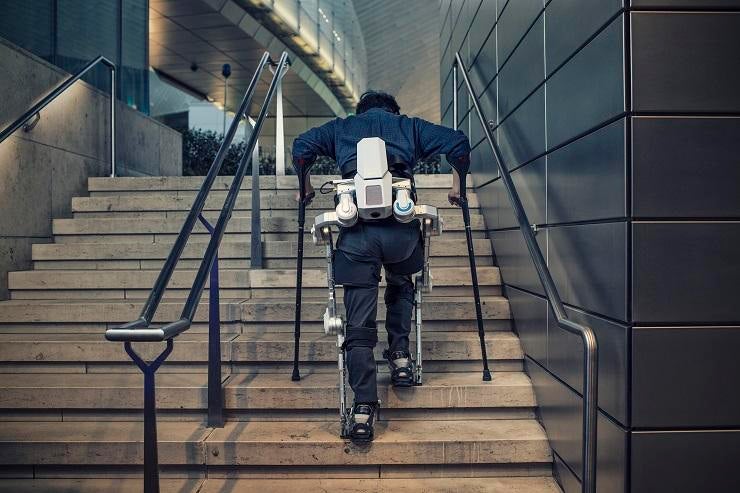 In its press release, Hyundai said the HUMA device, which looks similar to the H-MEX but extends further up a person's back, "provides assistive torque to help those with limited mobility … easily move their bodies." It can support up to 40kg of a wearer's weight and can run at up to 12km/h.

Both H-MEX and HUMA are powered by removable and rechargeable battery packs and their frames are adjustable to accommodate people of all different sizes.

H-WEX, meanwhile, is meant to prevent back injuries before they happen. It's designed to assist workers who repetitively lift heavy objects by supporting and protecting the lower back and upper legs while ensuring optimal body positioning.

There's no word as to when these devices might be available but Hyun on stage said that Hyundai has the capability to produce these exoskeletons, which he hopes will one day "truly make a difference in human society."