The tech company unveiled plans for a prototype visor that can bring the Minecraft video game, Skype calls and more to 3-D life.

This story originally appeared on Reuters

Microsoft Corp surprised the tech world on Wednesday with a prototype hologram visor that can bring the Minecraft video game, Skype calls and even the landscape of Mars to three-dimensional life.

The aging tech pioneer, which long ago lost the mantle of the world's most inventive company, is making a bold play to regain that title in the face of stiff competition from Google Inc and Apple Inc.

Virtual or enhanced reality is the next frontier in computing interaction, with Facebook Inc focusing on its Oculus virtual reality headset and Google working on its Glass project.

Microsoft said its wire-free Microsoft HoloLens device will be available around the same time as Windows 10 this autumn. Industry analysts were broadly excited at the prospect, but skeptical that it could produce a working model at a mass-market price that soon.

"That was kind of a 'Oh wow!' moment," said Mike Silver, an analyst at Gartner who tried out the prototype on Wednesday. "You would expect to see a relatively high-priced model this year or next year, then maybe it'll take another couple of years to bring it down to a more affordable level."

Microsoft does not have a stellar record of bringing ground-breaking technology to life. Its Kinect motion-sensing game device caused an initial stir but never gripped the popular imagination.

The company showed off a crude test version of the visor - essentially jerry-rigged wires and cameras pulled over the head - to reporters and industry analysts at a gathering at its headquarters near Seattle. 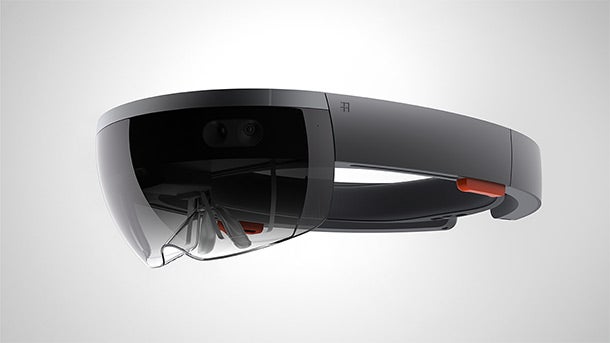 It did not allow any photographs or video of the experience, but put some images on its website.

Microsoft has been working on the top-secret project for a few years, and showed off a number of scenarios: manipulating virtual objects that can be sent to a 3D printer, creating a Minecraft-like game environment in a room and letting users point to objects on the other end of the line in a Skype video call.

Most realistically, it demonstrated a lifelike panorama of the surface of Mars gathered from NASA's Curiosity Rover. NASA has already been working with Microsoft to develop software called "OnSight," which will allow scientists on earth to virtually explore and plan experiments on Mars.

"It is incredible and surprised me in how far the state of the art has progressed with holograms. I kept waiting for Princess Leia to appear," said IDC analyst Al Hilwa, referring to the Star Wars character.

"But the future wildcard is whether a significant chunk of the population will be willing to wear such gear. We also have to wait and see what compelling applications emerge and how broadly life-changing they are," he added.