The Artistry of Winemaking

Ardison Phillips, combines his passion for creating wine, art and food to provide his customers with an intimate experience like no other. 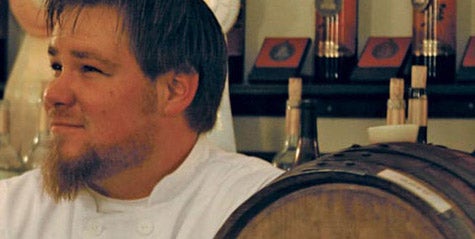 Ardison Phillips, the proprietor and winemaker of McKeon-Phillips Winery, was aptly named. He is an internationally recognized artist whose paintings hang in major museums throughout the world. He is also a culinary artist whose West Hollywood landmark restaurant, The Studio Grill, set a benchmark for fine cuisine. And he is an accomplished winemaker who brought the very best of European- and early American-style winemaking to the creation of McKeon-Phillips wines. In short, Ardison is truly an artisan.

But at heart, Ardison is an educator. This delightful fact becomes apparent to wine tourers the moment they step foot in the winery's tasting room in downtown Santa Maria. The inviting space feels more like a friend's living room than a retail establishment. The warmly-lit walls are covered with Ardison's compelling artwork. There's also a string of McKeon-Phillips wine bottles lined up along a low-lying shelf for guests to admire. They deserve close inspection because Ardison's artwork adorns all but three of the labels, which were designed by his son Bailey.

Instead of a tasting bar, the room features long tables with chairs tucked in around them. Ardison prefers to sit down with his guests and encourage them to take their time to taste and learn about his wines. "It's more like the way we enjoy wine at home," Ardison says.

There certainly is a lot to learn. Besides the flagship Bailey's Private Reserve Cabernet Sauvignon, McKeon-Phillips makes several varietals, including Pinot Noir, Sauvignon Blanc, Chardonnay, Syrah, Nebbiolo, and Sangiovese. Across the board, the wines are food-friendly, with notes that stand up well when young, yet also age well in the bottle. The 2005 Leonardo is a Super Tuscan-style blend of Sangiovese, Cabernet Franc, Merlot, and Cabernet Sauvignon. There is even a Port wine, named Sir Winston, with a bulldog on its label.

Ardison's hospitable nature, beautiful paintings, and exquisite wines certainly make McKeon-Phillips a place to linger when touring and tasting on the Central Coast.

Getting There:
Take Hwy 101 to Santa Maria. Exit Betteravia and go west (1.1 miles). Turn right on S. Blosser Rd. The winery is on the left side of the street.