Your Next Cute Robot May Be Korean

Pibo and Cubroid want to give every kid a robot, and they show there's innovation in Korea beyond LG and Samsung.

By Sascha Segan
March 23, 2017
This story originally appeared on PCMag

Pibo and Cubroid are friends. In a country where three giant conglomerates (LG, Samsung and Hyundai) suck up most of the engineering talent, these two pint-sized little robots could be the future of Korean hardware innovation.

Pibo is a 3-D-printed, Raspberry Pi-based "family companion" that can use the internet to answer questions about your world. Cubroid is a bunch of robotic blocks that help kids learn how to program using physical objects. The two are part of a small club of companies in Korea's new startup scene, which is dominated by software and services.

In a presentation, consultant Nathan Millard of G3 Partners says there's been a massive upswing in the number of Korean startups in the past five years, with more than 20 accelerators, a vibrant investment scene and major government support. When I visited the startups behind Pibo and Cubroid, I found a new Digital Media City (DMC) by the old World Cup stadium featuring towers stuffed with dozens of small startup companies. 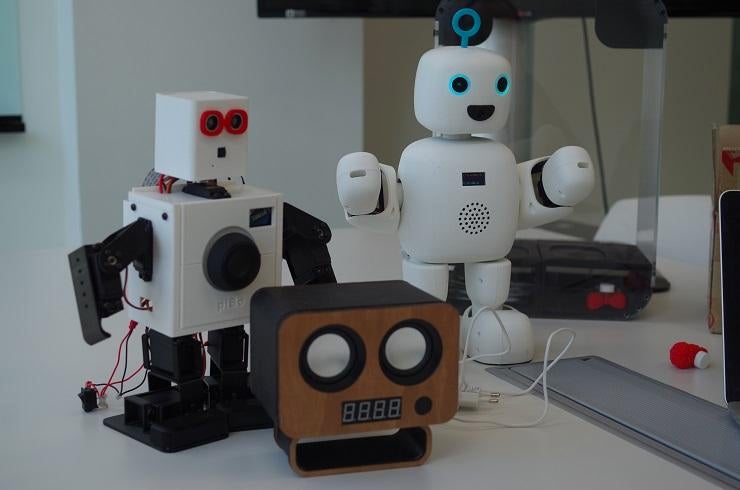 Pibo, at right, is the third generation of Circulus's robots

The biggest challenge, it seems, is global breakout. Of the 46 startups that DMC's Yu Bae Park told me he helps manage, only about 10 percent are currently looking at markets outside Korea. Millard points out that "of Korea's recent standout successes ... none have found success beyond Korea."

Korean tech firms other than the big three have tended to develop primarily for their own market -- Korea has its own analogues of Google (Naver), Facebook/WhatsApp (Kakao) and various other services -- and they don't tend to think or speak globally. That's changing, too, though. The Pibo and Cubroid guys, while unpolished and thoroughly engineer-driven, have their eyes set on the global market, and even on the U.S.

One thing about being in a small scene is that everyone knows each other. Cubroid's Mark Shin showed me a Javascript book written by Pibo's Jonggun Park and said he wanted to use Pibo's big-data AI system in the future. That's the kind of cross-pollination a startup scene could use to succeed.

Pibo is clearly one of DMC's darlings. It's made by Circulus, which is led by Jonggun Park, a former Samsung engineer who was working on IoT and big data projects when he became convinced that the way to push Korea forward was to teach everyone to code.

"I think that if everyone could make their own programs in Korea, then our country will be stronger," he said.

Coding eventually became robots because, well, "most guys love robots." Coding robots thus became Pibo: an open-source, Raspberry Pi-based, 3-D-printed home robot with its own cloud-based system, where you can code it through a block language, use JavaScript or download features that other people have written.

Pibo is an adorable robot from a Korean startup which is designed to be a family home companion.

"We will provide our own functions for families, but everyone can add their own ideas for programming, share their ideas and download other peoples' ideas too," Park said.

Pibo's demo reel shows the little bot being a home and family companion. Pibo plays soothing music, asks about your emotions and takes notes to relay to other family members. It has personality. The coolest thing about Pibo isn't the hardware. It's the AI platform. Remember, Park started out as an AI engineer.

Pibo's platform scrapes Google and the Korean services Naver and Kakao, and mixes in news sources such as The New York Times and BBC News, trying to fit queries to web data the way Google Assistant does. The company also plans to integrate the Alexa API and let Pibo use Alexa skills. So when I asked Pibo what she thinks of Donald Trump, she gave a consensus based on the contents of Korean blogs. (They don't much like him.)

Google Home and Alexa are trying to do this as well, of course, but the extra twist for Pibo is that she's mobile. She's not very mobile -- she's slow, and only has about two hours of battery life when she's on the move. But she can amble around a table using her camera to do video calls with various people sitting there, for instance.

Pibo's heart is a Raspberry Pi 2. Park said they'd like to use a Pi 3 or Pi 4, but the 2 is the right price to keep the robot under $500. "I want an intelligent robot for everyone, so we focused our price," he said.

The idea here is to let everyone do the level of DIYing they want. Are you hardcore? Circulus has uploaded the whole thing to Thingiverse, a repository of 3-D printing codes. Just want a cuddly home companion? It'll cost under $500 when it goes on Kickstarter in September.

You know those guys who can sort of do everything? Mark Jaekwang Shin (below, right) is one of those guys. He's a lawyer. He programs. He has an MBA. But right now he's living off some money his brother-in-law lent him and funding from various Korean seed funds and prizes, in a cluttered little office at the top of a slightly run-down building halfway to the Seoul airport, miles from the DMC startup hub. 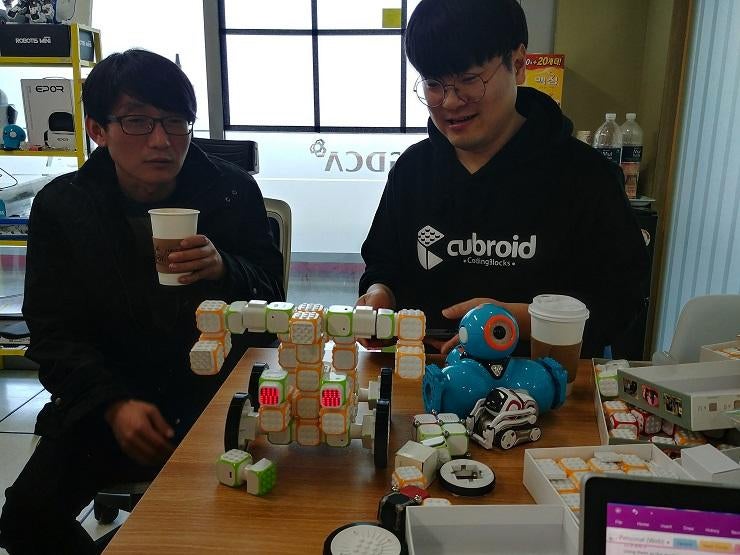 Shin has three daughters, ages 11, 8 and 5, and he wants them all to code. So he came up with a set of configurable Lego-like blocks that can be programmed either with a smartphone app (because it's impossible to get the kids off their phones, he says), or with the popular educational language MIT Scratch.

"The future of education is very interesting to me," he said. "I wanted to get [my 11-year-old] to code, using something like a robot." (Me too.)

The Scratch connection is what drew me to Cubroid, because my daughter is into Scratch. It's not just a language, it's also an unusually positive, reinforcing and safe online community for kids: Club Penguin for li'l coders.

Cubroid's office is a mess of boxes of little Lego-like cubes, naked circuit boards and one set of shelves with every other educational robot they could think of, for inspiration.

The Cubroid blocks, two years in the making, snap together just like Lego. A prototype first generation used magnets, but a snap-together toy is safer, Shin said. 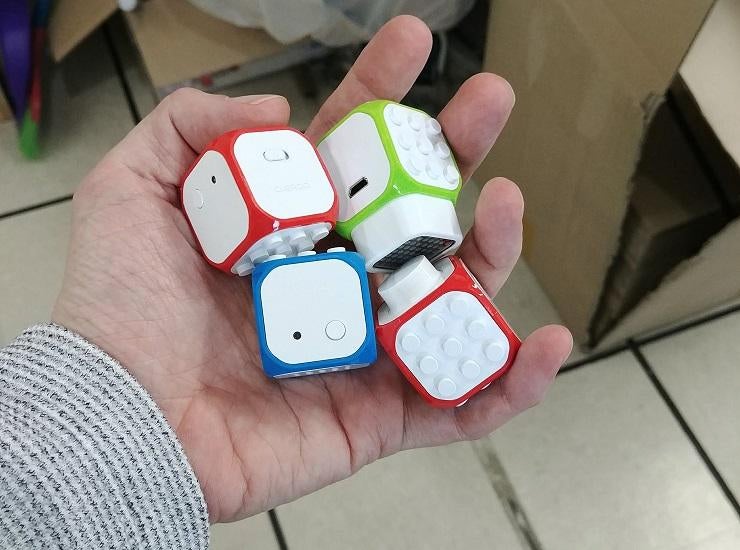 There are 10 different cubes: a knob; proximity, light and touch sensors; two motors; an LED light grid; a buzzer, a "master" cube and dummy spacer cubes. Each functional block has its own little battery, which charges via MicroUSB. They're color-coded by function: green and red for functions, blue for the master cube and orange for spacers. The master cube communicates with a smartphone via Bluetooth or a PC via USB, and then communicates with sub-cubes using a proprietary wireless protocol Cubroid developed. You can also plug the master cube into a PC using micro-USB.

Shin and his two staffers quickly put together a wobbly little robot with an LED smiley face which tried to clomp across the floor, and another giant kaiju-like thing that ended up being so heavy, he needed to replace the motor blocks with a newer version that had more torque.

Cubroid robot blocks, made by a Korean startup, can be programmed through their own app or using the popular Scratch kids' coding environment.

The idea here is to balance simplicity and extensibility. Lego Mindstorms lets you build and program with Scratch, but it's very fiddly. Other robots like Dash and Dot, Anki Cosmo and Ozobot are easier to use, but are fixed hardware. Cubroid is extensible, but extremely easy to put together.

On a white board, they've scribbled ideas for the next round of cubes: a camera, an MP3 player, an OLED screen. Shin said they're developing an Amazon Alexa-compatible block and a face-recognition block, and they're talking to the Pibo folks about connecting to Pibo's cloud-based system.

"In the future, like LittleBits, there could be different kits," he said. 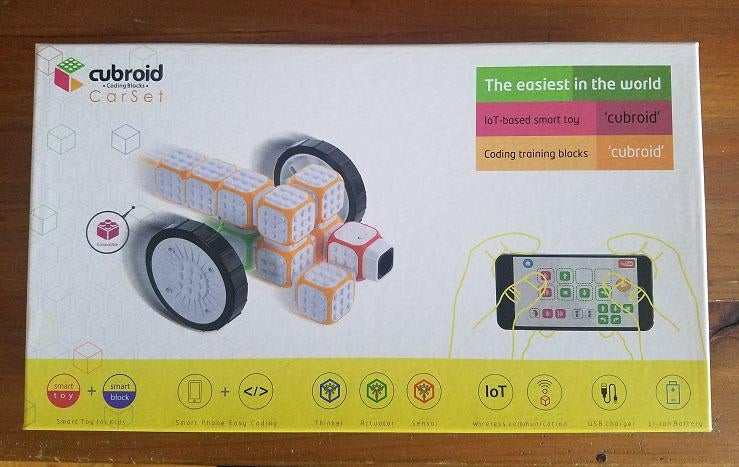 Cubroid's next step is to go to the big-league Kickstarter for manufacturing cash, probably sometime this fall. I'm normally super skeptical about Kickstarter, but I know this isn't vaporware and these guys are for real. They just can, right now, only afford to make lots of 300 at a time.

"When the Kickstarter money comes, we can make more," he said.

And they don't seem to be having manufacturing problems. Both Pibo and Cubroid show the advantage of starting a new hardware company in a country that actually, you know, builds hardware. There's a certain U.S. Kickstarter narrative that I call "Heart of Darkness," involving U.S. hardware companies that basically get eaten by a predatory China supply chain.

Shin's building his robots in Korea. He's Korean. He speaks Korean. This could work. I hope it does. Then we in the U.S. might be hearing more about Korean tech than just LG, Samsung and Hyundai.