Many retirees, and some on the cusp of entering their Golden years, may hear someone talking about our “Magic Number.” This post concerns the myths and realities of a retirement...

By Chris Porteous
August 31, 2022
This story originally appeared on Due

Many retirees, and some on the cusp of entering their Golden years, may hear someone talking about our “Magic Number.” This post concerns the myths and realities of a retirement “Magic Number.” First, we’ll explore what “the number” is and how various analysts propose different sets of numbers to represent it.

Crucially, we’ll explore why (and how) with some financial examples — this is not a one-size-fits-all situation.

Working Magic with your Magic Number — Understanding the Magic

As most Americans plan for their retirement, the thought of being financially comfortable versus being wealthy often factors into the equation. So the question, converted into magic numbers-lingo, would be something like this:

What would your personal wealth have to be, for you to consider yourself financially comfortable; and how much more would you have to accumulate to think of yourself as being wealthy?

Will a million dollars be enough for you to retire? Do you need more? Or, can you live a comfortable retired life on less? How much more or less would it take for you to hit your magic number? So, what’s the answer? And, how do you find the answer?

According to financial adviser and wealth manager Charles Schwab, it’ll take Americans under $150k more in 2022 (compared to last year) to consider themselves financially comfortable. However, Americans aiming to be wealthy have set the bar much higher in 2022 — $300k higher — than it was in the previous year. 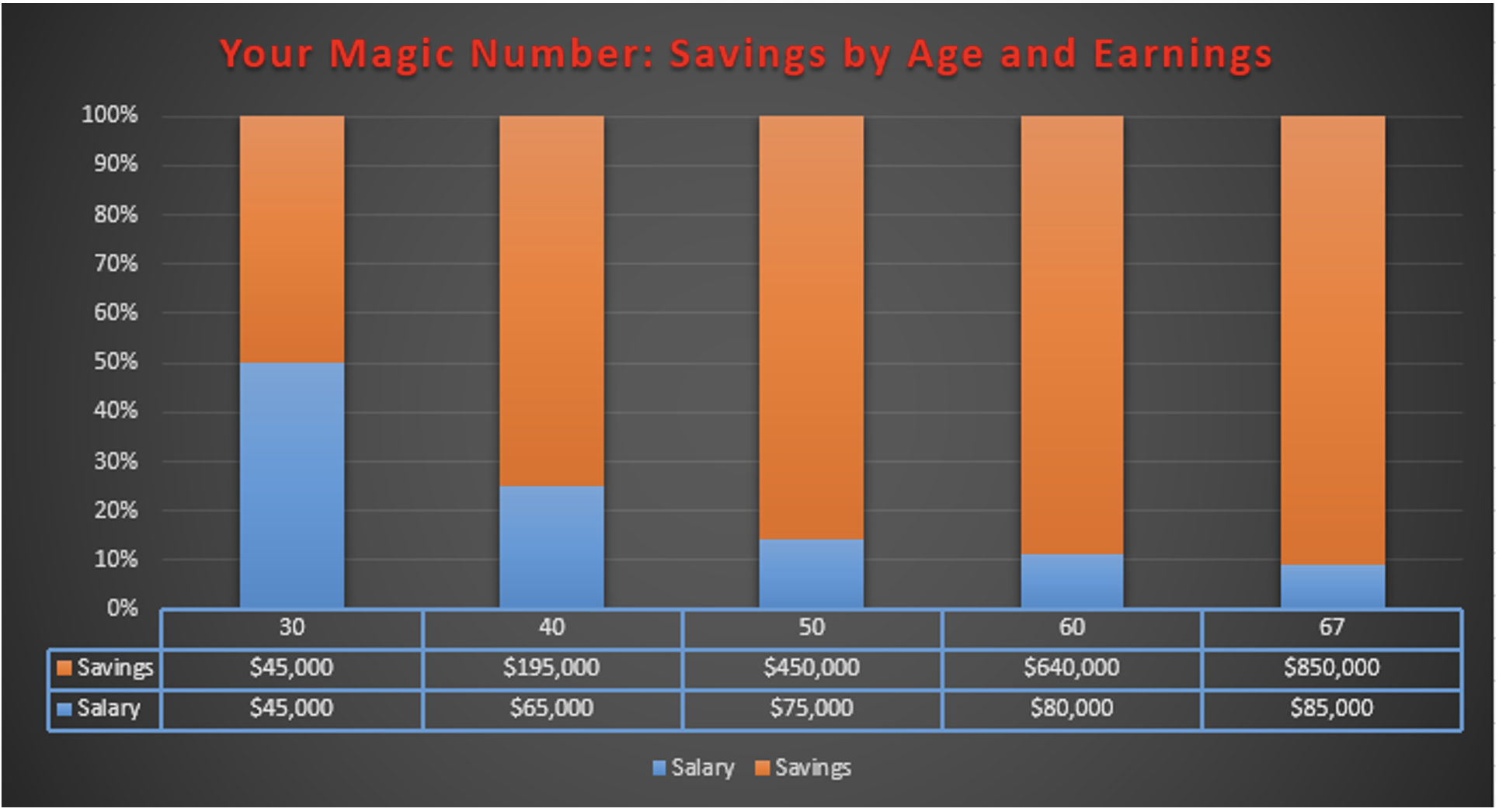 Other studies, trying to understand how much money you need to be happy, suggest that earning $75k annually leads to peak emotional well-being. The information in the study would suggest that, regardless of the size of your nest egg, if you can pull in $75k each year — through active and passive income-generating strategies, you’ve hit your magic number.

For some, however, the magic number, be it for financial comfort or joining the ranks of the wealthy, might well be a million dollars. Other experts believe that $500k is the actual magic number. The truth, however, is that each person’s magic number is different, and everyone’s numbers may change over time. Why is that so? What factors impact the magic number? And what can you do to ensure you hit yours?

Let’s begin by unlocking the concepts and theories behind magic numbers.

How often have you walked into a store – say, a home appliance shop – and heard the assistant ask: “What’s your budget?”. Or, if you’ve had the good fortune to shop for a home, have you had your realtor ask: “What’s your price range?” Well, your retirement magic number is modeled on a similar concept.

That’s your magic number, and Financial Planners don’t use magic wands, mystery portions, or secret spells to come up with that number. Instead, all is some basic math and a spreadsheet (or a GOFC – good old-fashioned calculator), and you’re all set to do a bit of magic of your own.

Remember when we asked about your home-buying experiences? Well, if you’re familiar with how that process works, you’ll understand that prospective buyer might have different preferences for a home.

Some just want four walls and a working bathroom, while others won’t settle for anything without a pool and a soccer field-sized backyard. It’s the same with magic numbers — they’re different for everyone.

Know About Your Personal Differences and Preferences

And knowing about those differences could potentially help young savers, retirees, and those about to retire, make their magic work better. So, what factors might account for those differences?

Along the way, other factors may come along to wield their influence over your number. For instance, the dark forces of unexpected expenditures — like serious illness, significant repairs to your home, or catastrophic investment losses, may cause serious setbacks that force you to rethink your numbers.

Alternatively, other brighter forces, such as windfall inheritances or outsized returns on investments, may also cause a recalculation of your magic number.

Exploring the Mechanics of Magic Numbers

As someone entering the workforce, say at age 20, and gradually progressing towards retirement, how does one know their magic number at any given time? You don’t! That’s because, at any given point along your journey toward retirement, there are so many variables that might change that it’s difficult to predict for several decades what your number is.

However, if you periodically pause and explore the factors discussed above along that journey, it’ll give you a sense of where you are and what more needs to be done to hit your magic number. But there’s also some science (and lots of math!) beneath the hood of the magic number-crunching machine.

One of the world’s leading investment companies, Fidelity Investments, offers this rule-of-thumb advice to savers and prospective retirees:

Graphically, here’s what this blueprint for hitting your magic number looks like: 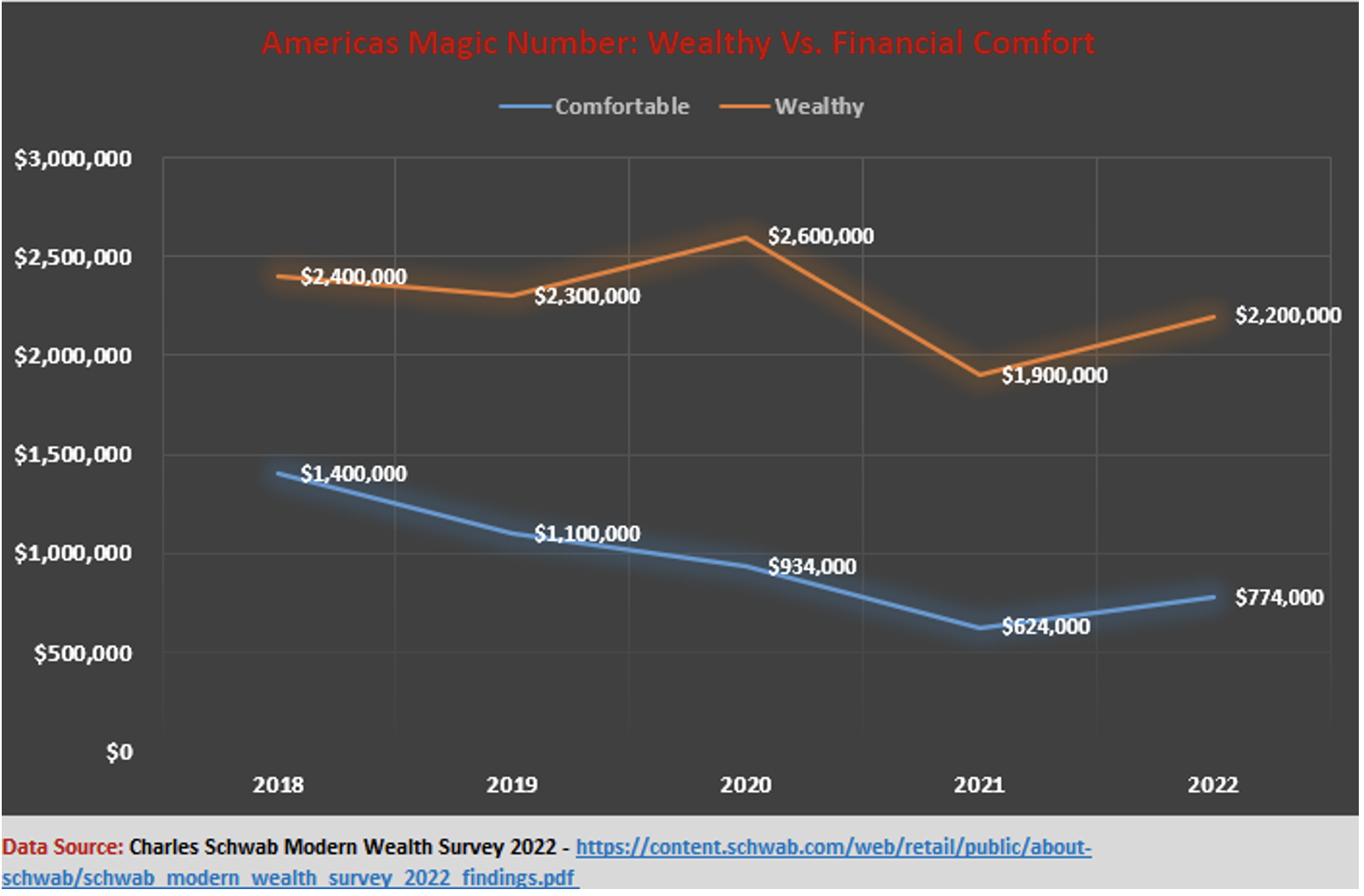 At first blush, these numbers (800%, 1,000%) might seem daunting – but they’re not! When you understand the mechanics behind the numbers, it’s easy to comprehend the method behind the madness of magic numbers.

#1: Firstly, this magic of numbers entails starting the magical journey as early as possible – in your twenties.

Even though most people in their 20s aren’t likely to draw a big paycheck, this first principle goes a long way in achieving your personal magic number. Why is this important? Because the earlier you begin your savings journey, the longer you’ll benefit from another magic potion – the magic of compounding.

Even if you start contributing $50 a month towards your magic number, you’ll accumulate a sizeable nest egg in 10 years.

#2: The second principle of magical numbers is: Every little bit helps.

Along your journey to reach your magic number, other factors could come into play and weave their own magic to supercharge the outcome of your number. For instance, what if sometime after you begin your journey, interest rates increase, or you take up a money-making hobby such as playing games like sudoku, bingo, and video games? And, along the way, what if you received a bonus, a commission, or even a pay raise — how will that impact the outcomes for you?

The results are apparent in the table above. Even though your monthly contributions haven’t increased much — a few years of saving $10 per month more — the fact that you managed to add those special, one-time installments to the mix, and a half-percentage interest rate hike, help propel you to a nest egg of nearly $9,000.

#3: Which brings us to the third principle of magic numbers: The later you start working at your magic number, the more of your paycheck, relatively speaking, you’ll need to save.

The clever folks at Fidelity Investments, who use the magic of actuarial science and financial planning to make their recommendations, suggest that at age 25, you’ll need to save 15% of your paycheck. However, if you delay your quest for your magic number until you turn 35, you’ll need to bump your savings rate to 23% to play catch-up.

#4: And finally, the magic is cumulative. What does that mean?

As you progress towards retirement, compounding and investment returns (hopefully positive ones!) have a cumulative impact on how much less you must do to achieve your magic number. To explore this further, we’ll revisit our earlier graph, Your Magic Number: Savings by Age and Earnings.

In the commentary to the chart, we explained that “…by age 50, your savings magic number is 600% of your current salary.” 600% seems rather steep when taken out of context. However, look at it from a different context:

How did that happen? It happens because everything you’ve done to date has a cumulative impact on what you must do moving forward. Each successive milestone you accomplish makes your salary-to-savings percentage shrink until you hit just 10% by the time you are 67 and are ready to call it quits.

Your Magic Number is an aspirational target that may change over time, which is different for everyone. However, as you get closer to your retirement date, the point (that we’ve made earlier) of reviewing it periodically is to ensure you are on track for meeting your number.

However, knowing what that number is ahead of time, understanding what factors influence it, and being aware of various strategies to meet that number — or even surpass it can help relieve the stress that builds up leading into retirement.

The post Building Blocks for Hitting Your Retirement Sweet Spot appeared first on Due.