Meet the Franchise Serving Dinner in the Sky

It's the gourmet meal of a lifetime. Just don't look down.

It sounds like a dream--or a nightmare. You're sitting at a table high above the ground, feet dangling in the breeze as you cut into beef medallions and sip fine wine, watching the clouds roll over the skyline.

For the past several years, that scenario has been a reality for guests of Dinner in the Sky, a Belgium-based company that hoists adventurous diners at tables suspended from cranes for a night of vichyssoise with a soup?on of vertigo. Early this year, the American franchisee of Dinner in the Sky is launching the brand's first permanent location, in Las Vegas.

If it sounds like a publicity stunt gone haywire, well, essentially it is. The concept was created in 2007 when David Ghysels, owner of a marketing and communications company, teamed with bungee-jumping impresario Stefan Kerkhofs to create an aerial dinner for the Jeunes Restaurateurs d'Europe association. Word spread about the wacky high-wire act, and the duo soon began receiving calls from around the world asking how to replicate it. That's when they got the idea to start franchising the concept.

Now Dinner in the Sky events take place in major cities--including Rio de Janeiro, Cape Town and Istanbul--in 47 countries. But they're not nightly occurrences; the occasional cranebased meals are seen primarily as a marketing tool to promote special events or product launches. 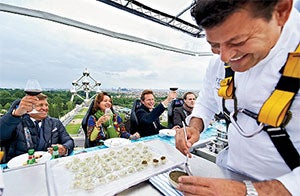 A Dinner in the Sky event in Budapest, Hungary.

When Janeen Hinden and her late husband, Michael, owners of a Las Vegas wedding chapel and event-planning and catering businesses, came across Dinner in the Sky at a trade show in 2008, they thought the concept would be a perfect attraction for their hometown. They tested the idea with a New Year's party for friends and business partners; so many of their guests said they wanted to do it again--and bring their friends--that the Hindens realized Dinner in the Sky could become a permanent Sin City attraction. So they rented a crane and held a three-month test run. "It was a phenomenon," says Hinden, citing multiple repeat customers. "There was so much media exposure."

The couple decided to get rid of the expensive cranes and build two permanent Dinner in the Sky towers, with tables that can be raised and lowered multiple times each night and other event facilities at the bottom. Michael died in 2011, but Janeen has carried the idea forward, spending more than a year working on the engineering designs of her $5 million project, which required FAA approval. Although the opening has been delayed several times, she expects to take diners into the Vegas sky this year.

So what will the experience be like? Hinden says most nights will start with a few courage-building cocktails (and some liability waivers) in an Earth-bound lounge built between the towers. Most food prep, too, will be completed down below. Then up to 44 guests, each paying $500, will strap into seats around the two sky tables, which will have three 90-minute seatings per night. 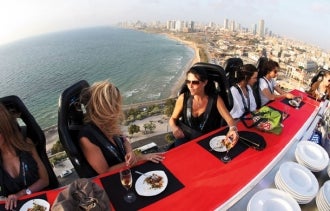 Once guests have been hoisted 180 feet into the air, the chefs will perform final preparations on the five-star gourmet meal. "It's actually quite an adrenaline rush going up," Hinden says. "But once you settle in at 180 feet and see the red rocks and canyons, it's a calming, peaceful, beautiful experience."

Guests are encouraged to visit the restroom before ascending (although the table can be brought down in an emergency), and menu items are carefully considered to avoid foods that might be choking hazards.

Hinden, who hopes Dinner in the Sky will be a destination for birthday parties, weddings and other special events, expects Las Vegas to embrace the concept and is already looking for properties in Miami, New York, San Diego and Hawaii to erect other towers. Company founder Ghysels is supportive of Hinden's work and is watching it closely before attempting to replicate it at other Dinner in the Sky locations.

"It all depends on each country," he says. "Dinner in the Sky is a global concept but must be implemented locally according to the local habits, commercial potential and weather conditions. So it will remain a marketing tool in countries that don't have 250 days of nice weather, like Western Europe. But it could evolve as a permanent unique restaurant in cities with different conditions."

That's all a ways off; Hinden will be happy just to get her Vegas tower operational. She has 3,500 names on her waiting list and says more than 1,000 corporations have expressed interest in hosting events. And what about people who might not have the stomach to eat in midair? "That's why we're putting in a lounge with a great view of the tables," she points out. "Some people need to watch others getting strapped in and going up a few times before they're ready."