He's Got the World on a String

A former Wall Street analyst spins his yo-yo passion into a million-dollar-plus business.

By Jennifer Wang
June 21, 2010
This story appears in the July 2010 issue of Entrepreneur. Subscribe » 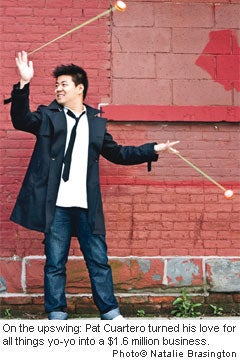 It's like watching a ninja on steroids. In one YouTube video, Pat Cuartero wows the crowd with the fluorescent-colored blurs of a move he calls Angel Wings, which involves spinning two yo-yos in opposite directions, over his head and behind his back. He wins that contest.

Cuartero knows how to work the business side of yo-yos, too. He's founder of YoyoNation, known for its extensive store, active online community and go-to industry blog. The company is on track to hit $1.6 million in sales by the end of the year. It opened a UK office in April and plans one in the Philippines in the next month or two.

It all began back in 2005, when Cuartero--a high school 2A yoyo champ turned Merrill Lynch analyst--discovered a higher purpose: getting more people in New York City to play with yo-yos. He funded startup costs with about $8,000 of credit card debt, and in his first five months, he netted $32,000. It was enough to persuade him to leave Wall Street and develop his target market.

"We sponsored all the contests because these were the people who would buy cases, strings and bearings," Cuartero says. At the same time, he established an active online community. "Forums are much faster than newsletters as a way to reach people who care. We have a 90 percent conversion rate, so whenever we announced a new product, we'd sell out of it."

YoyoNation stocks products for all skill levels and styles--from a three-buck plastic Duncan to the rare $549.99 handmade Oxy Ti titanium model--plus parts to pimp out the toy, clothing and gear (think Japanese skater boy). The site now gets 37,000 unique visitors a month and sells to fans in 79 countries.

"My dream was to make New York the capital of yo-yos," he says. "But we have the potential to become a global brand."

These days, you can spot Cuartero walking around the city with yo-yos in hand, working on his fundamentals (ask him to show off something cooler than Walk the Dog). "I don't know what's next," he says. "But you can bet YoyoNation will be a part of it."