By Jason Fell
September 26, 2011
Opinions expressed by Entrepreneur contributors are their own. 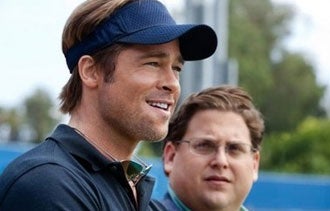 When business as usual isn't cutting it, you might consider turning your company's strategy on its head. Or, perhaps, find someone else who can help you do it.

That's the premise of Moneyball, a film based on the 2003 Michael Lewis book Moneyball: The Art of Winning an Unfair Game about the Oakland Athletics baseball team. After several seasons of painful losses, the team's general manager, Billy Beane, adopted a radical, statistics-driven approach to building a competitive baseball team under an ownership that underinvested in the franchise.

The film made its U.S. premiere this weekend.

As Major League Baseball nears the end of its regular season and starts looking to the playoffs, here are three lessons small-business owners can learn from the true story behind the film:

1. Make change when it's needed.
After a painful loss in the 2001 playoffs and then losing three top players to larger-market teams which were ponying up millions of dollars to acquire the best players, Beane -- played in the film by Brad Pitt -- decides that drastic changes need to be made. He turns to a young Yale economics graduate who believed players should be valued by their on-base percentage (how often a batter reaches base) rather than the traditional method of relying on scouts' experience and intuition.

Not only did this new way of doing business enable the A's to acquire run-producing players, it allowed them to do so at a lower cost because those players were largely undervalued by other ball clubs. "We are card counters at the blackjack table and we're going to turn the tables on the casino," Beane says in the film.

2. Stand by your decisions.
Beane's unconventional methodology was ridiculed by baseball critics. It also wasn't greeted warmly within the A's organization, with player manager Art Howe and several coaches among his early detractors. But Beane didn't budge. He fired at least one top scout who refused to adopt the team's new recruiting plan.

Beane also worked to get the rest of the team and staff on board. He explained the process and spent weeks teaching and encouraging players to perform to or beyond expectations.

3. Set realistic goals.
Even though winning the World Series championship would have been an amazing accomplishment for the A's, Beane says in the film his main priority was to demonstrate the value of the team's new methods, to "change the game."

In the 2002 season, the A's reached the playoffs but lost in the first round to the Minnesota Twins. However, the team set an American League record for winning 20 consecutive games during the regular season.

So far, Beane and the A's are still hunting for a championship season.

Need To Cut Costs? Start With These 10 Money Saving Ideas