The Question All Entrepreneurs Need to Ask Themselves

Gerard Adams, founder of Fownders, wants to help aspiring entrepreneurs get their ideas in motion.

To start your own business or not? That is the question. Serial entrepreneur, angel investor and philanthropist Gerard Adams wants to help you find the answer. Having been through great highs and lows in the entrepreneurial world, Adams knows from experience when it is time to go all in, and when it is time to step back and rethink.

Adams' first major success came in 2012. After trying and failing at multiple businesses, he teamed up with Jonathon Francis and David Arabov to launch news platform Elitedaily.com. Within three years, the wildly popular site sold to The Daily Mail for $50,000,000. (Yes, a lot of zeroes in that number.) That success, along with many that followed, put Adams on Business Insider's list of the 100 Most Influential People in Silicon Alley.

Dedicated and passionate about passing along insights to aspiring entrepreneurs, Adams created Fownders, a startup accelerator situated in the city he was raised in, Newark, N.J. "Bringing tech and innovation brings me a sense of fulfillment that I've never had in my entire career," Adams told Entrepreneur. "It's exciting how Newark is changing. Eataly just came to town, Whole Foods came to town, we just met with the mayor who is super behind everything that we're doing. Newark is the next Silicon City."

We spoke to Adams about the innovative program at Fownders, what he's learned from past experiences and where he sees the future of entrepreneurship heading. Here are some of the takeaways from that conversation.

Learning to be an entrepreneur the hard way.

"Entrepreneurship today is a sought-after career path. When I first started, I didn't even call myself an entrepreneur. I dropped out of college my first semester and everyone looked at me as a typical failure. I was trying to make my parents proud by going to college but I looked at it -- being told what classes to take, the amount of debt I'd be in -- and it wasn't for me. I dropped out and I had to find out the hard way what entrepreneurship entailed. It took me about 14 years of hustle and grind and getting the right mentors to learn about business, how to scale a business."

"After being asked to speak about my journey in Silicon Valley and New York, I looked around at the incubators and accelerators and asked myself, 'Why don't we bring these resources back to the inner cities?' I wanted to create a platform that brought social-economic development to an area like Newark. I wasn't a kid who had everything handed to me. I had struggles early on and I know that you can have success regardless of where you're from. Not everybody can be a great entrepreneur, but a great entrepreneur can come from anywhere." 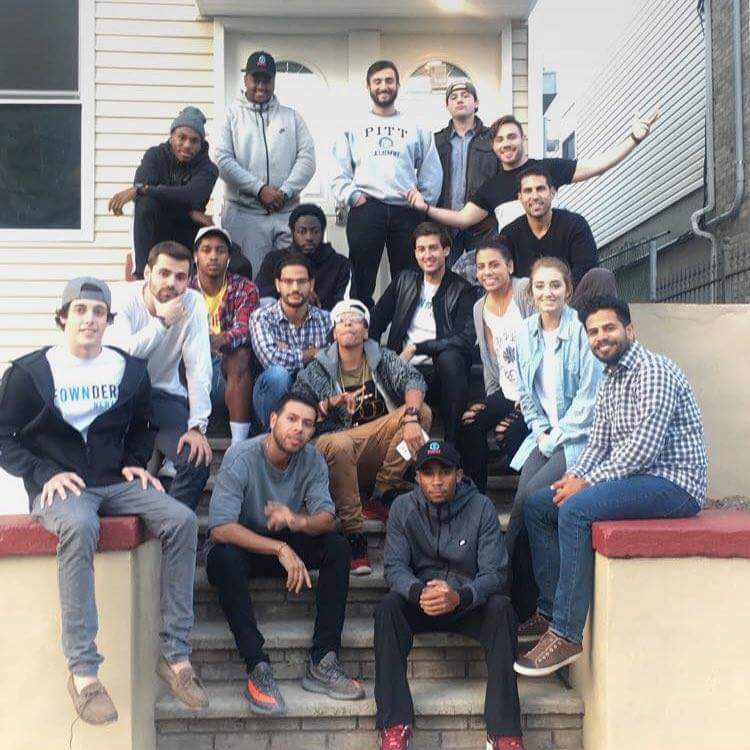 "As an entrepreneur, you're going to get told 'no' 100 times. You're going to constantly have people doubting you. Stick to your beliefs, but understand that everything you think you're going to create, you'll need to adapt and pivot. Most ideas don't wind up as what you envisioned to be the final product. In the beginning, we tell everyone, 'There's a good chance that your idea won't work. Are you going to have the ability to pivot and understand where the market is going?' It's not about what you think, it is about what your consumers want."

Until you have value, you have nothing.

"You might have a business, but you don't own shit if that business doesn't have a value. So you're going to need to sacrifice. Late nights, early mornings, weekends spent building your product and a team of people around you. If you are willing to do that for years and years, then you have a chance to succeed."

The power of mentorship.

"Ryan Blair's book, Nothing to Lose, Everything to Gain, really hit home for me, especially after I lost millions during the recession, between 2008 and 2010. I lost my business and my money and Ryan's book inspired me to push on. I wrote about him in an article, got him as an advisor when we started Elite Daily, and he became a dear friend and an investor. Because of his guidance, we were able to continue to scale Elite Daily and have an exit, and now we have a lifelong friendship. He's a great mentor. Gary Vaynerchuk, someone else who is from New Jersey, he's been a mentor of mine."

Related: What is Emotional Intelligence and Why Does it Matter?

Where do ideas come from?

"Ideas stem from solving problems. How many times have you seen a product or service and thought, 'Oh my God, why didn't I think of that?' Create something you wish existed. Or look at other people's ideas and refine them. For Elite Daily, we didn't reinvent the wheel. We were getting our information from five or six publications and we thought, 'How can we find something that is more the voice of generation Y, that hits all of these verticals in a one-stop shop place?' So we created it ourselves. The idea is sitting right in front of you sometimes. What do you wish existed? There's your idea."

Ask yourself this tough question.

"How do you know if this is the idea you want to pursue? Forget about the money and ask yourself, 'Does it have true meaning and purpose?' Is it going to make an impact on the world and change people's lives? If you can honestly say yes, then you have a higher purpose and at Fownders, that's when we think you are ready to go all in."

What's the next big wave?

"I think video technology and virtual reality are exploding fields right now. Personal branding is really exploding as well. Influencer marketing is so powerful, and we've coined something called 'social currency' and we're helping some entrepreneurs leverage social media to build a community. A community can help generate ideas and business."

Related: Gerard Adams and Lewis Howes on Entrepreneurship and Success

The importance of community.

"People live at Fownders and we're developing an entire Fownders district right down the street here in Newark -- a production studio, an art gallery -- so much is happening. And with each new piece, we build a tighter-knit community. It really is a family now. Previously, as an entrepreneur, you're working in a coffee shop or your parents basement. At Fownders, you're sitting side-by-side with other ambitious and passionate people. That's the secret sauce. That's the intangible thing that makes this place special and the thing I wish existed when I first started out.