How Cemeteries, Police and the Holocaust Museum are Coping With Pokemon Go Fever

Pokemon is taking the world by storm -- even in places we'd least expect.

Augmented reality game Pokemon Go is officially a viral sensation. Players are so addicted they aren't just hunting for "Pokeballs" and coveted characters in malls and sidewalks. They're looking in a host of unusual places forcing business owners, police and other officials to crack down on where the game can be used. From memorials to police stations to your neighbor's yard at 1 a.m., people will do anything to capture the closest Snorlax.

National Mall and Memorial Parks
Want to Poke-hunt in our nation's capital? Be careful. The National Mall made a special statement on Facebook reminding players to be respectful while playing the game on the grounds. It wrote: "Yes, it might be tempting to go after that Snorlax near the Vietnam Veterans Memorial, or the Venusar hanging out in the chamber of the Jefferson Memorial … Remember that these are places of solemn reflection," the National Mall writes in a Facebook post. That said, the landmark seem to be taking the trend in stride, sending players to more appropriate locales such as the Constitution Gardens and posting photos of rangers posing for selfies with Jigglypuffs to drive interest in other parts of the park. 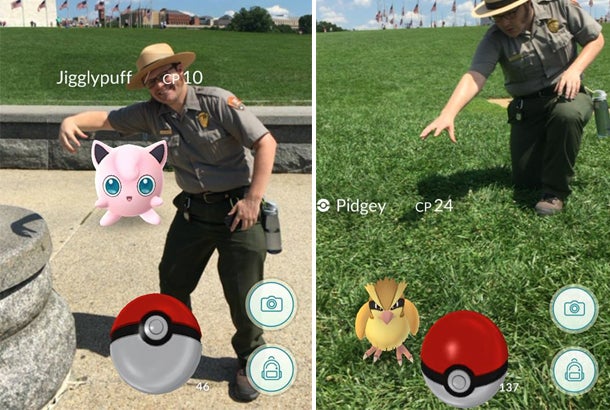 Police stations
Police in Darwin, Australia are asking citizens to refrain from walking into the station to play -- which happens to be a "PokeStop' in the game. Without necessarily discouraging the use of the game, the Northern Territory Police Fire and Emergency Services posted on their Facebook page: "You don't actually have to step inside in order to gain the Pokeballs."

Private property
Pokeballs or not, trespassing is still trespassing. Police departments in southern Illinois have warned players that they may be charged if they go into someone else's yard or private property to capture a character. After receiving an increasing number of complaints, the Marion Police Department needed to send out a warning to residents Tuesday reminding them not to "wander around at 1 a.m. or in the middle of the night, on someone else's property or in someone else's back yard looking to catch one." As the police stressed, it's "Not a great plan and definitely not safe."

Cemeteries
Pokemon hunting has become the norm even in places of respect and remembrance. The Evansville cemetery shocked local officials with nearly 26 "PokeStops' on the property -- the most concentrated in the area. The traffic is so high in this particular cemetery that superintendent Chris Cooke needed an hour and half to clear the grounds. Said Cooke in an article by the Indy Star, "I ended up requesting the police department to shut the gates," he says.

The U.S. Holocaust Museum
Who knew people would hop on the app at the world-renowned U.S. Holocaust Museum in Washington D.C? Surprisingly enough, the museum itself actually boasts three "PokeStops' within the game where players pick up free items to boost their scores. The museum's Communications Director Andrew Hollinger explains the inappropriateness of playing the game inside the museum, "which is a memorial to the victims of Nazism," and has mentioned trying to get the museum excluded from the game.