The first mid-engine Corvette in the sports car's more than 65-year history was revealed on Thursday.

When it came time for Corvette Chief Engineer Tadge Juechter to convince General Motors execs that the eighth generation of the iconic sports car needed a mid-engine configuration, he had his work cut out for him. After all, since the first Vette rolled off the line back in 1953, the engine has been up front. One bigwig, however, didn't need to be swayed. "Several leaders needed a lot of hand-holding and were non-believers," Juechter tells Entrepreneur, "but I never had to convince Mark Reuss. He knew it was the right thing to do."

Right from the get-go, GM's president believed this radical change was necessary for the C8, as the next generation is known. Placing the engine behind the driver and in front of the rear axle -- which improves acceleration, braking and handling -- is an engineering feat normally reserved for wildly expensive supercars from the likes of Ferrari, Lamborghini and McLaren. A mid-engine Corvette sends the message that America's sub-six-figure sports car (the starting price will be under $60,000) is ready to stand wheel-to-wheel with the world's best. Based on the overwhelmingly positive response at its unveiling in Tustin, Calif., on Thursday evening, Reuss, Juechter and the rest of the team were on to something.

Related: To Stand Out in a Crowded Field, the Designers of the New Chevy Blazer Asked: 'What Would a Camaro SUV Look Like?'

As both a lifelong Corvette fan and longtime GM employee -- he began his career there as a student intern in 1983 -- Reuss is uniquely positioned to oversee the development of a vehicle many view as revolutionary. We spoke to him on the eve of the car's reveal to learn how he found the confidence to remake a legend, his message to doubters and why moving the engine to the middle doesn't make the C8 any less of a Corvette.

This is the first mid-engine Corvette in the vehicle's over 65-year history. How apprehensive were you about making such a huge change to an American icon?

You're always a bit nervous to mess with success, especially with a legendary vehicle like the Corvette. However, the current generation, the C7, had pushed the limits of what could be done with that configuration -- it is the absolute best. To take performance to the next level for our customers, we had to move to mid-engine.

What gave you and your team the confidence to make this change?

First was the confidence in our Engineering, Racing and Design team. This group lives and breathes Corvette, and they are students of performance. When they said they were ready, I knew it was time. Second, mid-engine has always been part of Corvette's destiny. We have explored mid-engine concepts dating back to the original CERV I from 1960. Corvette's original chief engineer, Zora Arkus-Duntov, famously advocated for mid-engine vehicles, but we needed to make sure we kept Corvette true to its roots of attainable performance. Mid-engine has historically posed a challenge to this mission; not so anymore. The time has come, today, and we feel both Corvette traditionalists and potential new customers will embrace the change in layout.

There must have been -- and continue to be -- plenty of naysayers, both internally and externally, who don't think a Corvette should be mid-engined. How did you maintain your vision, and how do you respond to them?

Internally, I remind them that we don't set the standard for Corvette; our customers do. Our job is to exceed those standards and remain faithful to the brand promise. This car does all of that and more. It will quiet the naysayers on both sides of the wall quickly once they see it and, especially, once they drive it.

Tell us about your personal history with the Corvette.

Simply put, this car is the reason I work at General Motors. In the mid-'60s, I spent many car trips hunched in the back of a Corvette riding with my dad. On Saturdays he would take me to work at the Chevrolet engineering building, and I made him promise to take me to the research labs to see the new Corvette. Everything this car stands for -- its presence, performance and heritage -- raises the hair on the back of my neck. Most importantly, Corvette has always embodied the company's resilient spirit by demonstrating what it means to win and be the best.

How would you describe the essence of a Corvette, and what steps did you make to maintain that spirit in the new generation?

No matter the configuration, Corvette has to live up to its fundamentals: performance, functionality and attainability. No other car delivers on all of those points like Corvette does. Whether you're on your daily commute, hitting the track or taking a long weekend trip, the Corvette can do it all, and then some. That's what we need to build on. Corvette has always taken design cues from fighter jets, and this one is no different. From the forward cabin to the driver focused interior, it truly feels like a proper cockpit. These are some of the key attributes that we wanted to build on.

What are the biggest changes in the C8?

The mid-engine layout is the biggest change. This new layout enables better weight distribution, power to the ground and acceleration. This will be the fastest Corvette ever, capable of zero to 60 in less than three seconds -- and we didn't compromise a thing to get there. This new layout and its many performance attributes will deliver an elevated supercar experience. Our current C7 and those before it had a powerful presence, but this new mid-engine eclipses anything we have done in the past. Our design and engineering teams did an excellent job, working together to create a mid-engine vehicle that still looks like a Corvette, while providing even more performance and functionality. On the interior, nearly all the parts are hand-wrapped and stitched, and all the decorative trim and attention to detail reflects the premium craftsmanship that was our mandate from the beginning of development.

You mentioned the design was inspired by fighter jets. Corvettes were popular with astronauts in the '60s -- would you say Chevy is connecting the vehicle back to its roots?

Every Corvette has been inspired by the aircraft of the era, and this new Corvette continues that tradition. Chevrolet's design team looked at jet fighters as inspiration -- the epitome of design and performance. Advancements in precision engineering, design and technology have combined to push the boundaries of propulsion and aerodynamics. These are traits that Corvette has always embodied. NASA and aviation have always inspired the designers and engineers that created every generation of Corvette. 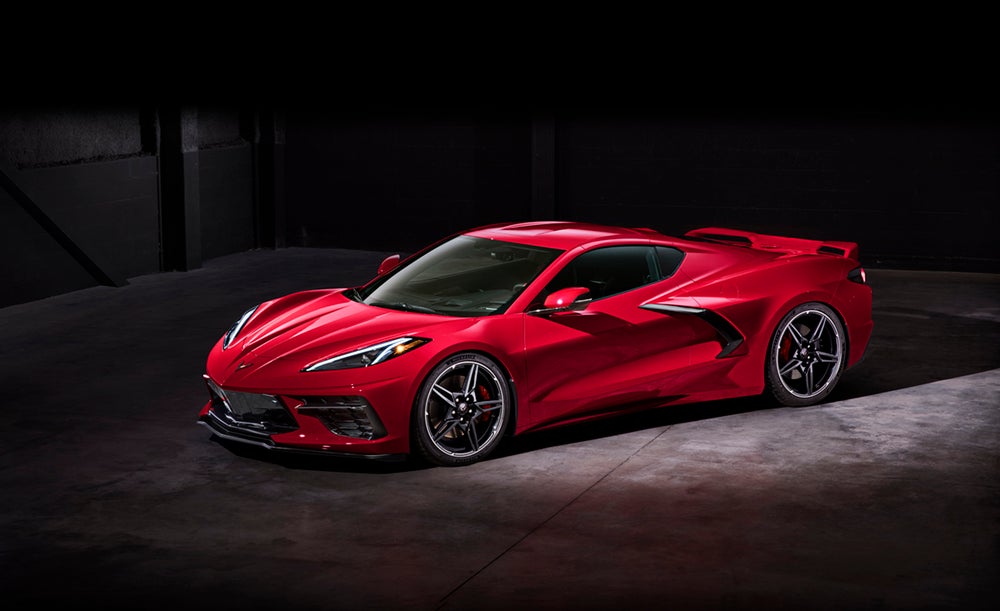 With so many competitors in the sports car space, how do you maintain an edge? How did you encourage your team to think differently when bringing this car to life?

If we remain true to Corvette's brand mission and deliver innovation and performance at an attainable price, we will maintain our advantage. I pushed the team to find new technologies, materials and solutions that improve the entire experience for the customer. Having a racing team really provides an advantage, too. We learn a lot on the track that then transfers over to the street.

You've climbed the ranks at GM. Have you learned more from your successes or your failures?

Life is a series of successes and failures, hopefully more of the former than the latter, but if you're doing it right, you learn a lot from both. That's what I've tried to do, and that's what we've tried to teach our children to do. The same theory applies whether you're going to school, starting a new job or launching a new vehicle. Always be learning.

What do see for the future of Corvette? Can you envision an electric model? An autonomous version?

We've just started the journey on C8; it's going to be a long and exciting trip. Stay tuned!