Sarah Max
March 1, 2013 min read
Opinions expressed by Entrepreneur contributors are their own.

No doubt, Washington, D.C., has more than its share of politicians, power brokers and bureaucrats. In recent years, however, a new breed of mover and shaker has emerged -- the entrepreneur. Many of the city’s startups have ties to the federal government, whether because the founders once worked for Uncle Sam, have a potential solution for a big government problem, or both.

Even those companies with no direct government ties say the stable economy, highly educated population and revitalized urban core make Washington an ideal spot for launching a new venture. In addition, there’s no shortage of accelerators, incubators, co-working spaces and other resources for entrepreneurs in Washington -- as well in nearby cities in Virginia and Maryland. Here’s a look at some notable ventures that have taken root in and near the U.S. capital.

Cathy Carroll contributed to this report.

Shahab Kaviani was in the process of exiting his last startup, HyperOffice, when he starting thinking about ideas for his next venture. “I reflected my success at HyperOffice, and realized the single biggest factor that led to our success was the founding team,” he says. He decided to find a partner first, then work on building the next company from there. But connecting with potential partners wasn’t easy. Kaviani asked other entrepreneurs how they found suitable business mates and learned they were struggling as well. “So I did an experiment to see if I could organize a meetup and find my cofounder,” he says.

Though he didn’t realize it then, it was the first of many cofounder matching events. Not only did he find his cofounder, serial entrepreneur Culin Tate, but he also found his next business concept. In November 2011, CoFoundersLab released its first online matching platform, which uses a proprietary algorithm to match entrepreneurs based on industry, skills, location and even personality. Between its online platform and in-person events, the company estimates that it has made more than 20,000 different introductions. While the main service is free, the company plans to roll out premium features this spring. 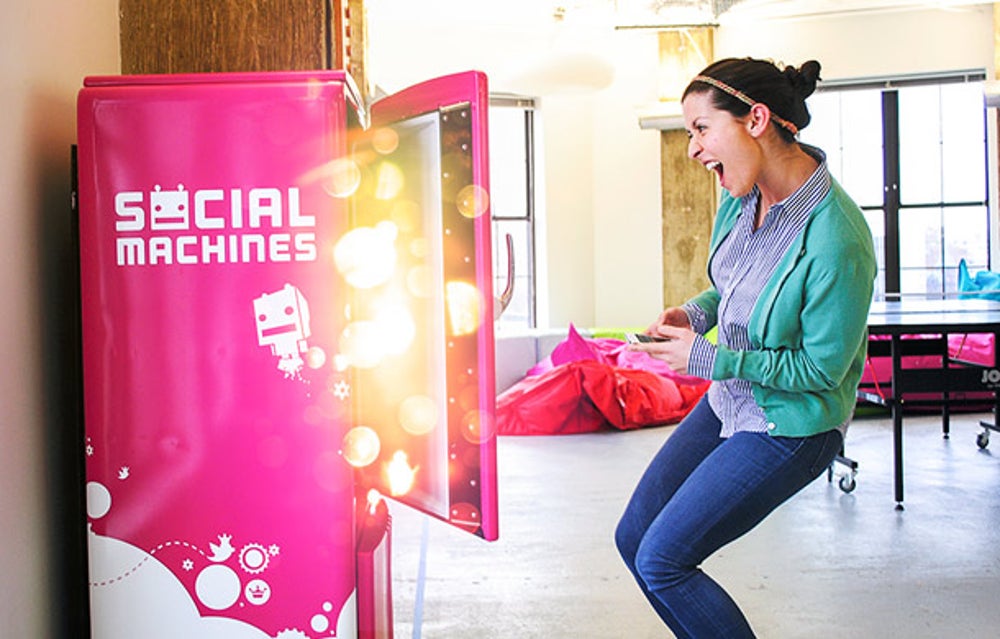 A "smart" vintage refrigerator in the iStragetyLabs offices near Dupont Circle in Washington D.C.

There were plenty of things for people to ooh and ah about at last year’s South by Southwest (SXSW) in Austin, but one crowd favorite was a 1939 refrigerator that popped open after 10 people checked into it on Foursquare. The refrigerator, which had been retrofitted with a custom Arduino micro-controller circuit board and stocked with cold beer, was the brainchild of iStrategyLabs, a creative digital agency launched by kid programmer turned ad agency strategist Peter Corbett.

Simply put, iStrategyLabs helps its Fortune 500 clients engage with customers in new and interesting ways, both online and in the real world. “We try to dream up new things that have never been done,” says Corbett, who also runs DC Tech Meetup and Digital Capital Week. The company’s Grandstand project, for example, transforms tweets, likes and other social actions into prizes and awards and has been licensed by the likes of AT&T, Ford, Hilton and Pinkberry. 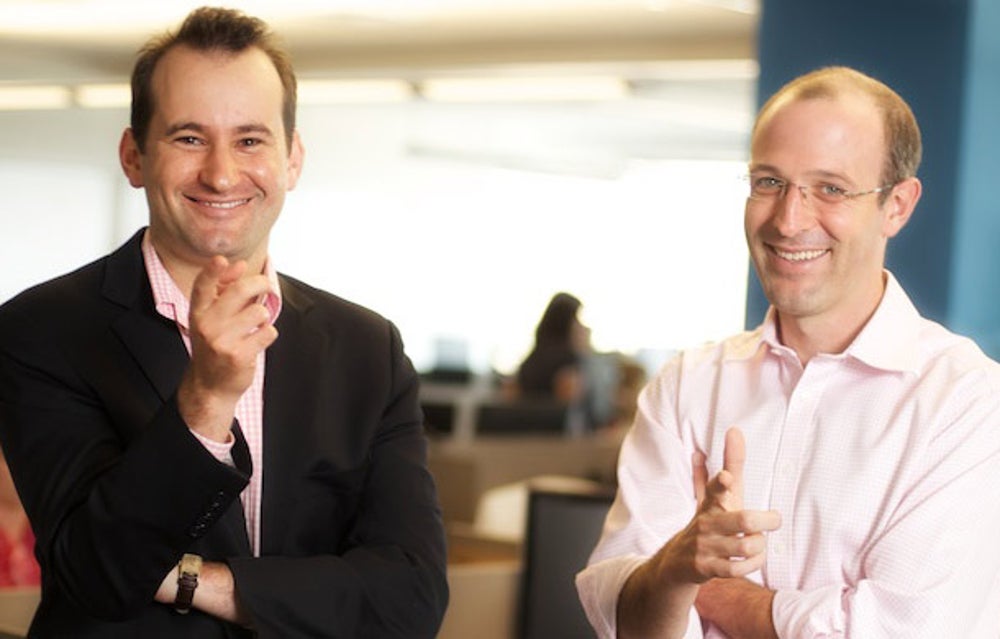 After Dan Yates, co-founder of Edusoft, sold the educational software company to Houghton-Mifflin in 2003, he traveled with his wife for a year, driving from Alaska to Argentina. He was amazed by the natural beauty he saw along the way but appalled by how it was being destroyed.

He vowed that his next venture would help preserve the environment. Yates and Harvard pal Alex Laskey founded Opower, which offers consumers energy efficiency tools, information and incentives to cut their energy use. For example, its digital energy reports show utility customers how their energy use compares with that of their neighbors and how much it has increased or decreased from the prior year.

The company’s Social Energy App lets people compete against friends to see who’s using the least energy. Yates and Laskey partnered with their first utility client in 2007 from a rented desk in San Francisco and moved to Arlington in 2009 to try to make inroads with policy makers and utilities. Today, the company works with more than 75 utilities, including eight of America’s largest. Opower says its platform reaches more than 15 million homes and has helped families and businesses save more than $220 million on their utility bills. 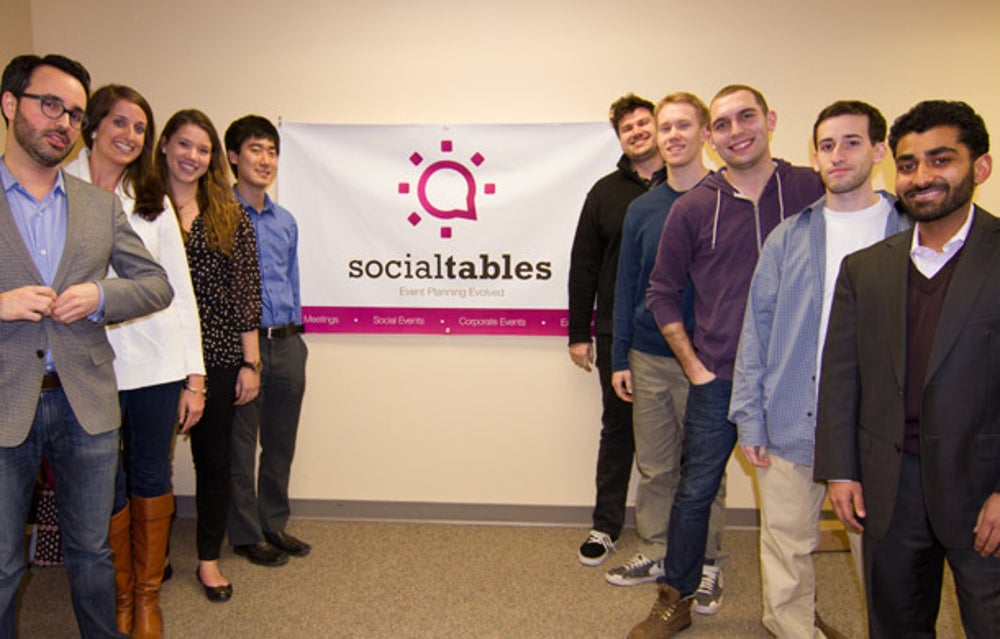 The staff at SocialTables has helped streamline event planning.

Dan Berger was en route to a wedding two years ago, wishing he could see a seating chart so he’d know where the cute girls would be. That was part of the inspiration for Social Tables, a Web-based platform that lets event planners create mockups of their space, use social data to build seating charts based on, say, common interests, and manage RSVPs and meal requests.

Since its launch in 2011, the company has helped plan more than 8,000 meetings and events on its platform. For a hospitality startup, Washington is ideal, Berger says, given the abundance of hotels and event spaces and the more than 800 conferences every year. 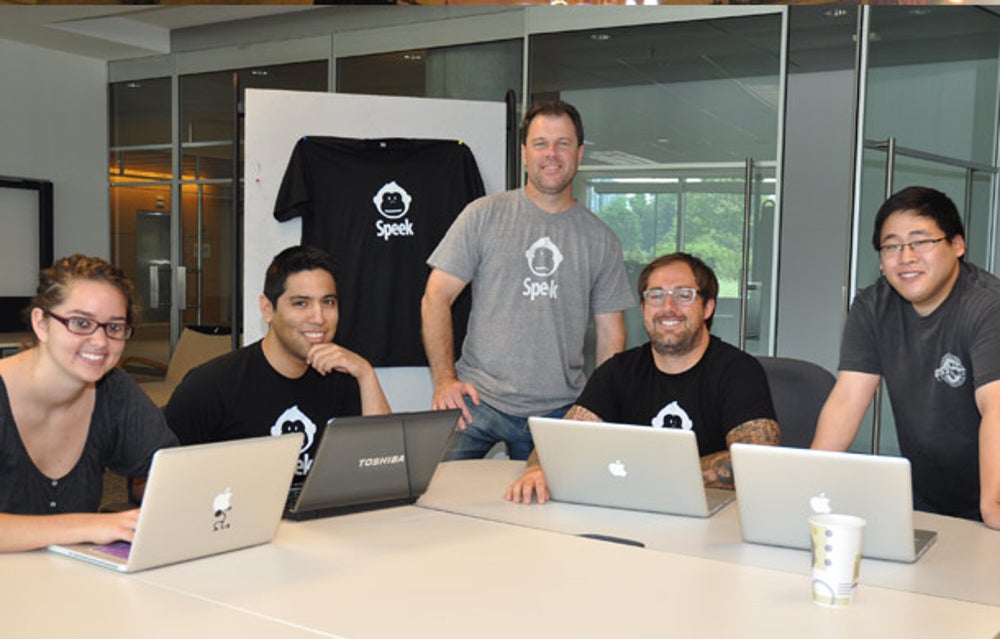 Speek working out of the AOL 19s Fishbowl Labs

This online conference-call site was spawned from a desire to rid the world of access codes and elevator music. As corporate employees, Danny Boice and John Bracken set out to make business calls not just bearable, but easier and visual with Speek. Rather than share dial-in numbers and access codes, users give callers their personal link (for example, speek.com/JaneSmith).

Callers click on the link, enter their number and wait for a call. Once on the call, they are connected to a visual conference room where they can see icons and contact information for each participant, and click and drag documents to the center of the virtual conference table for sharing. Speek is located in AOL’s incubator Fishbowl Labs, where it receives advice and feedback from AOL advisers and other entrepreneurs in residence. 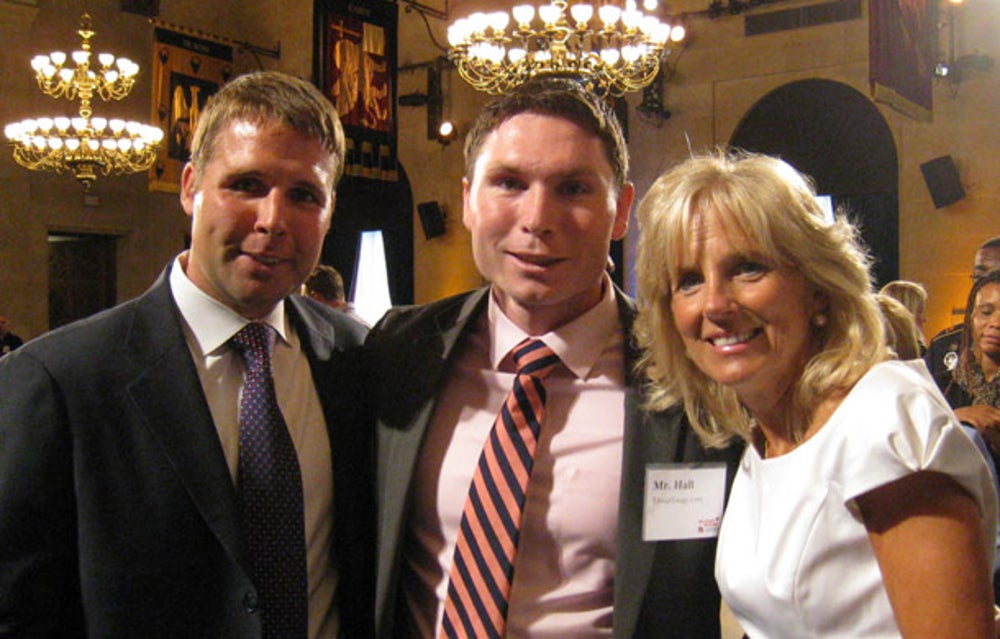 Active service members, veterans, spouses and their dependents register with the site, which verifies their credentials. Once verified, they can use their troop identification and password to get special deals or benefits via participating merchants’ sites and receive flash discounts and exclusive offers on everything from event tickets to travel packages. The company unveiled Troop ID last November, and by the end of the year, had registered 48,000 members. The company also got a shout out from the White House on a blog, commending the company for its new service. "That," Hall says, "was an amazing day." 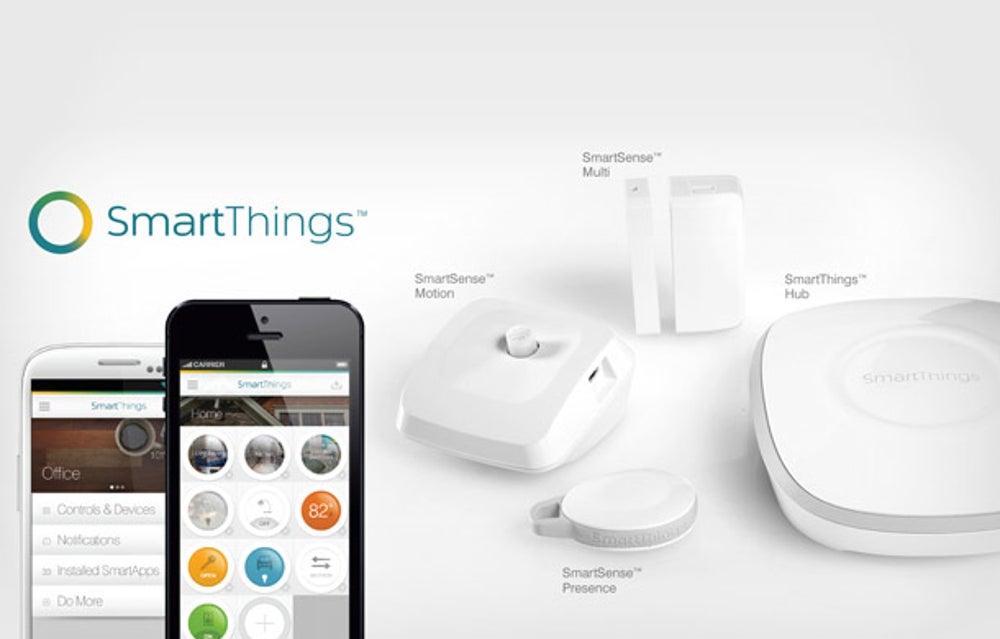 SmartThings wins the Spark of Genius start-up contest at the Dublin Web Summit.

One cold day in Colorado, Alex Hawkinson’s family cabin lost power, and the pipes froze and exploded. He was at home in Virginia and later found the rooms destroyed by water. After that experience, he tried connecting the outdoor thermostat to his iPhone for alerts, but found it complicated. So, he and six other entrepreneurs founded SmartThings, which sells $299 kits for controlling ordinary household objects via smartphones and tablets. Hawkinson and his co-founders ran a Kickstarter campaign in September, garnering 6,000 backers and $1.2 million. The one drawback to being in Washington for SmartThings was the city’s low profile as a startup hub. That meant the company’s founders had to travel frequently to meet potential investors in other cities. Soon, however, investors will have good reason to come to them. The company is putting the final touches on its headquarters in Georgetown – an open working space with a developer lab and an expansive rooftop terrace overlooking the Potomac and the monuments. 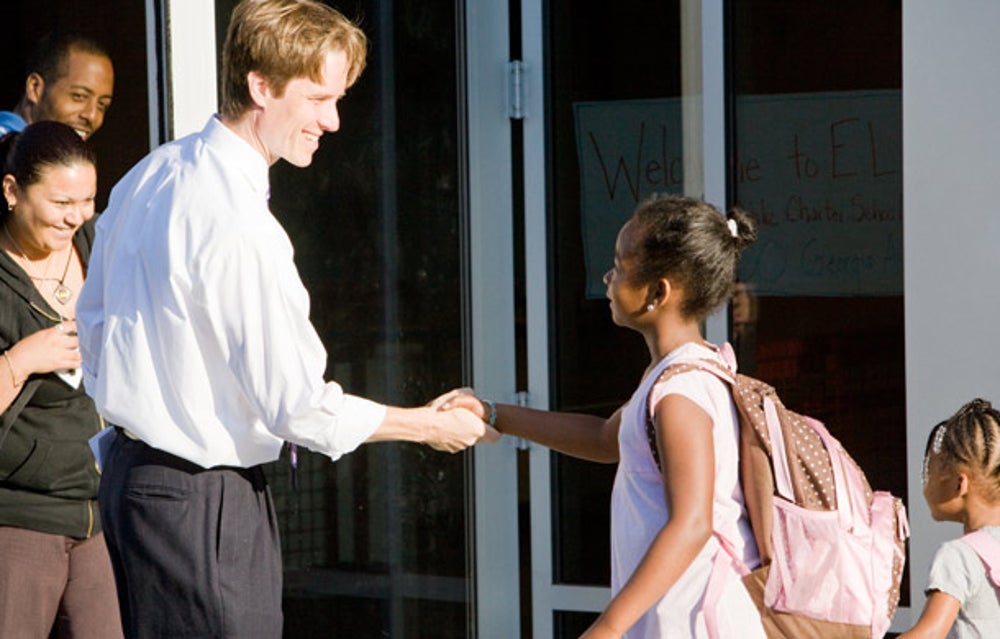 Eric Westendorf was the principal and chief academic officer of E.L. Haynes Public Charter School in Washington when he started thinking about how to “bottle” the best lessons from top teachers and make them accessible to all students and teachers. He teamed up with Stanford Business School classmate and former McKinsey education consultant Alix Guerrier to launch LearnZillion.

Their idea won a Next Generation Learning Challenge Grant funded by the Bill and Melinda Gates Foundation. The platform, which is free to teachers and students, contains more than 2,000 lessons designed by the company’s “dream team” of teachers from public and private schools throughout the country. Schools and districts pay for premium content and advanced features. Every lesson is based on the Common Core State Standards, which are being adopted in 46 states and the District of Columbia, and includes a “coach’s commentary” on why the lesson was taught the way it was. The site has more than 90,000 registered teacher users and is signing up new teachers at a rate of about 1,000 per school day.