Everything You Need to Know About the Apple Campus

Apple is known for having high standards when it comes to design, and it would seem that its latest and biggest project -- its brand new campus -- is no different.

To quote Saturday Night Live’s Stefon, “This place has everything.”

Read on for what Apple’s employees have to look forward to -- including a self-driving shuttle service to get them from point a to point b -- when their new HQ opens.

Apple isn't the first company to set up headquarters on the land. 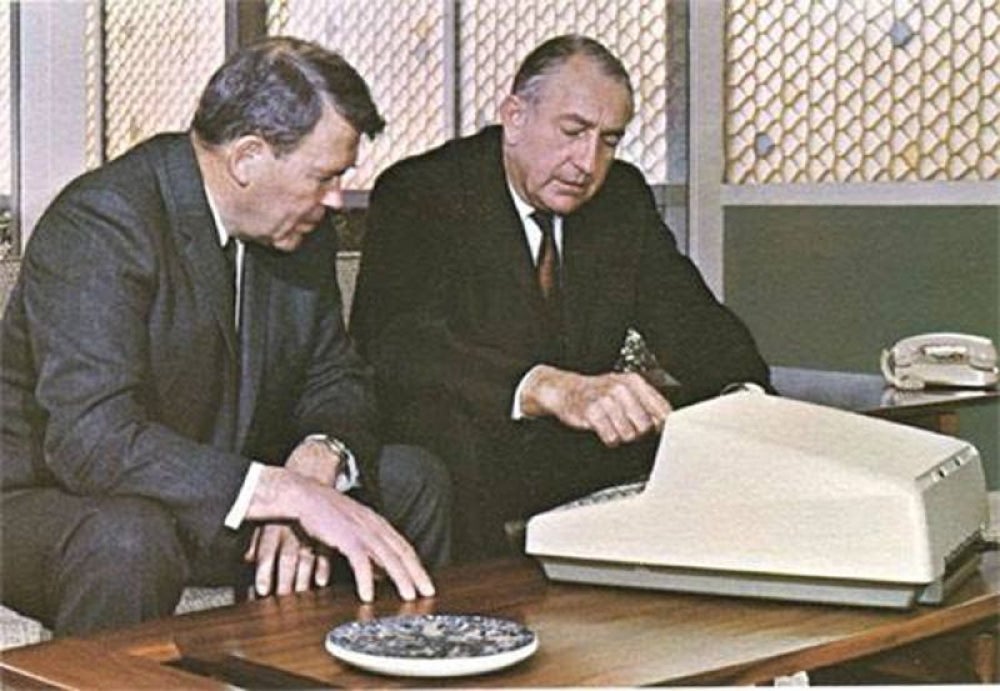 Image credit: HP | Facebook
Most of the 175-acre area that is set aside for the project is located on the former Hewlett Packard campus. In order to make way for the new HQ, roughly 2.65 million square feet of office and R&D buildings have to be torn down.

Steve Job's pitch for the campus was his last public appearance. 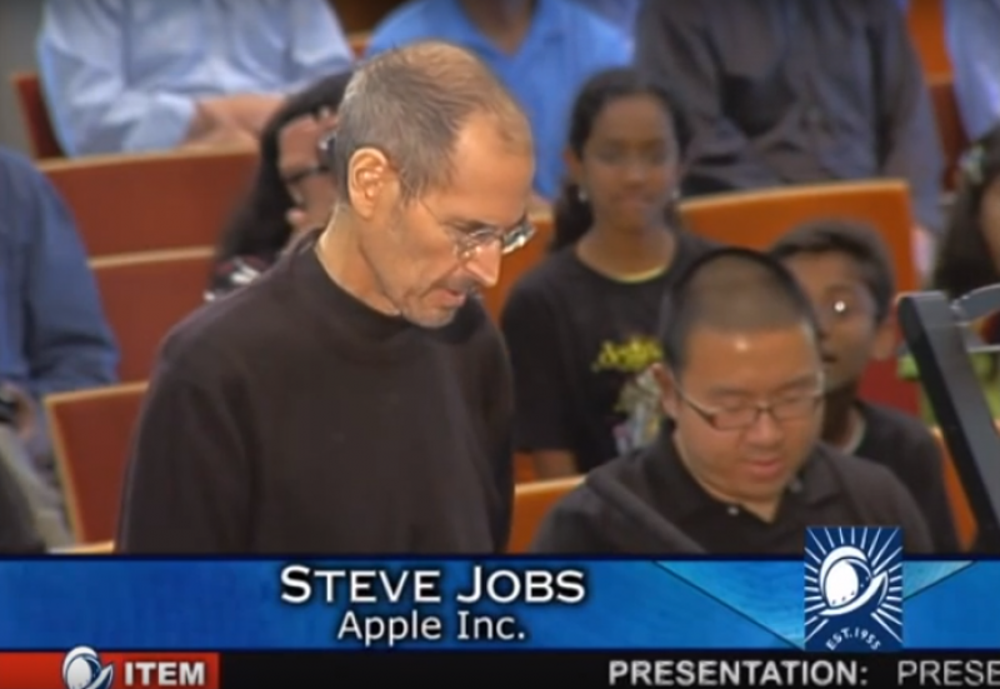 In June of 2011, the late Apple co-founder presented the plans for the new campus to the Cupertino City Council. Jobs died just a few months later on Oct. 5, 2011. At the meeting, he explained why the location and the land were so special to him.

“When I was 13, Hewlett and Packard were my idols. I called up Bill Hewlett because he lived in Palo Alto,” Jobs recalled. “I talked to him and asked him if he would give me some spare parts for something I was building called a frequency counter. He did, but in addition to that, he gave me something way more important: He gave me a job that summer.”

There is a major emphasis on health. 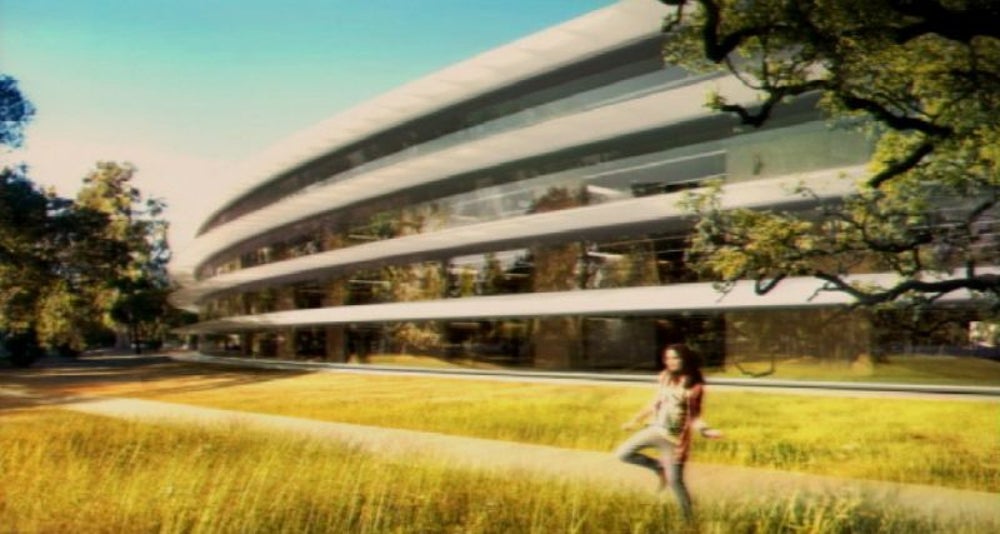 Image credit: Apple
The new campus will be home to a two-story yoga room and a 100,000-square-foot fitness and wellness center that provides medical and dental services to employees. CEO Tim Cook told Wired, “I’m a big believer in people staying active. It’s something that makes them feel better and more energetic. It’s all about the fixation on the customer, and the customers here are our people, our employees.”

Steve Jobs didn’t want it to be like any old office park. 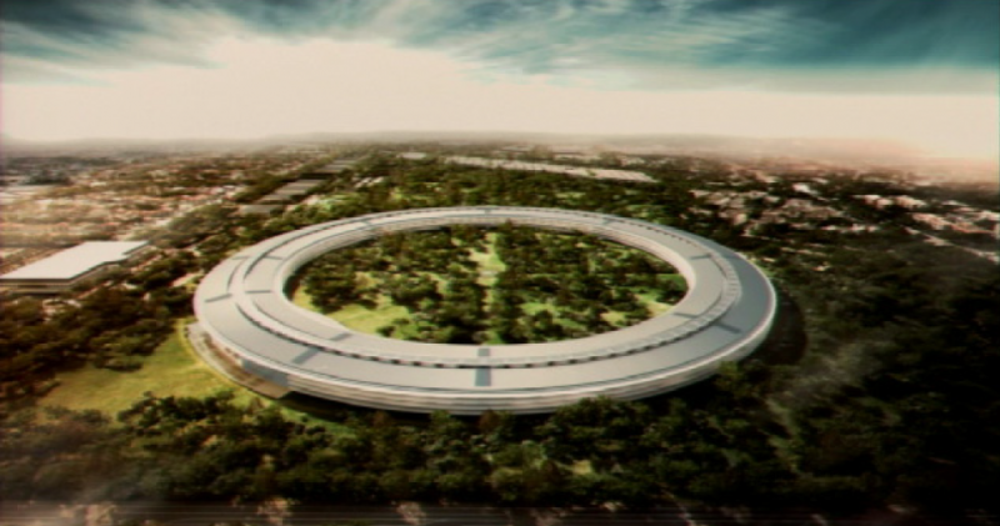 Image credit: Apple
In that same presentation, Steve Jobs professed that he found most corporate HQ’s to be “pretty boring,” and he didn’t want that to be the case for his company. He wanted the new building to accommodate a growing staff and he described the centerpiece of the project, a circular structure meant to house 12,000 employees, as amazing. “It’s a little like a spaceship landed,” he said.

The great outdoors are a priority. 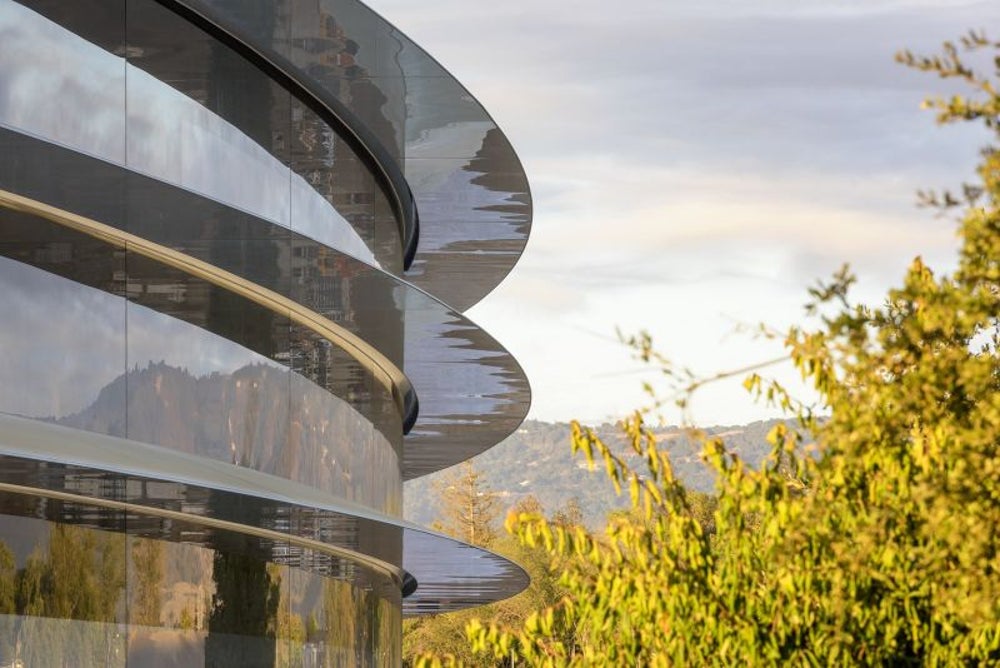 Image credit: Apple
The campus will be surrounded by two miles worth of walking and running paths. There will also be a orchard, meadow and pond in the interior of the ring.  The company is planting 9,000 drought-resistant trees so the view from the building is that of greenery. Apparently, Apple’s excitement to get its hands on the trees created a shortage of them.

Choose your own adventure. 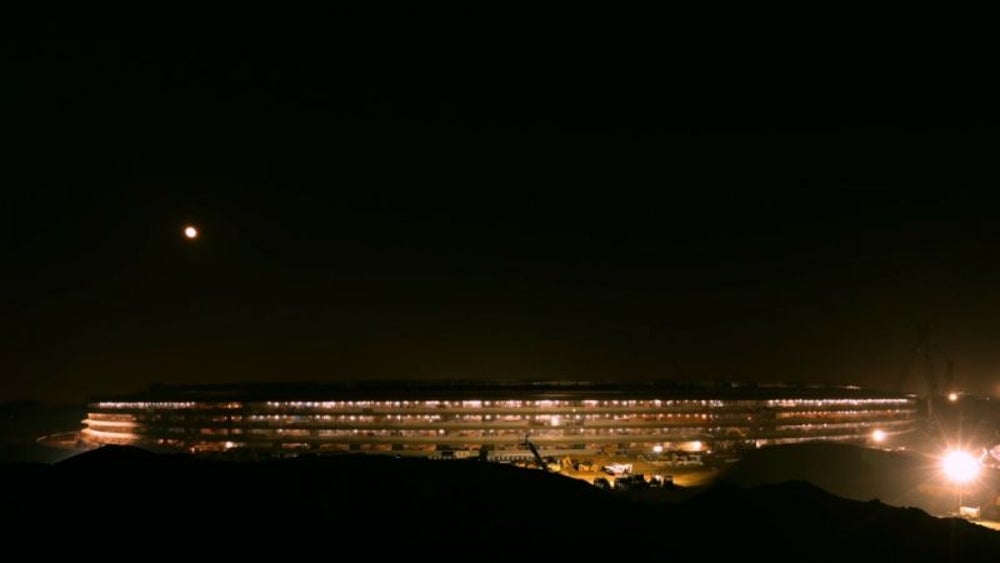 Image credit: Apple
“The Ring,” that circular building that Jobs was so excited about, will be 2.8 million square feet and there will be no main lobby. Instead, there will be nine different entrances for employees and visitors to choose from. 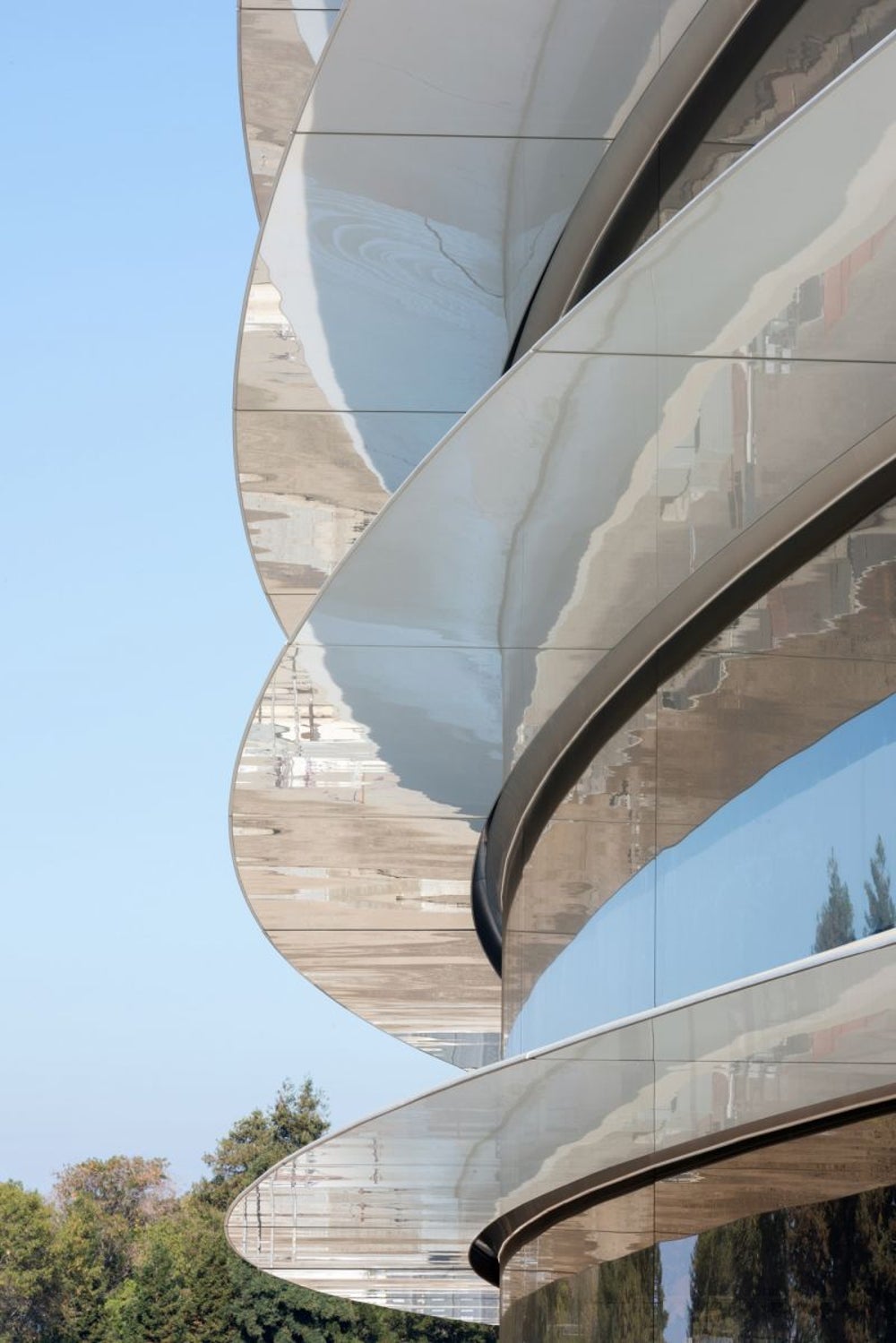 Image credit: Apple
Who needs Disneyland? The campus will be home to the aptly named Apple Park, and it’s not just meant to be enjoyed by the employees. There will be an Apple store -- naturally -- and a cafe open in the visitor center.

There will be a ton of parking. 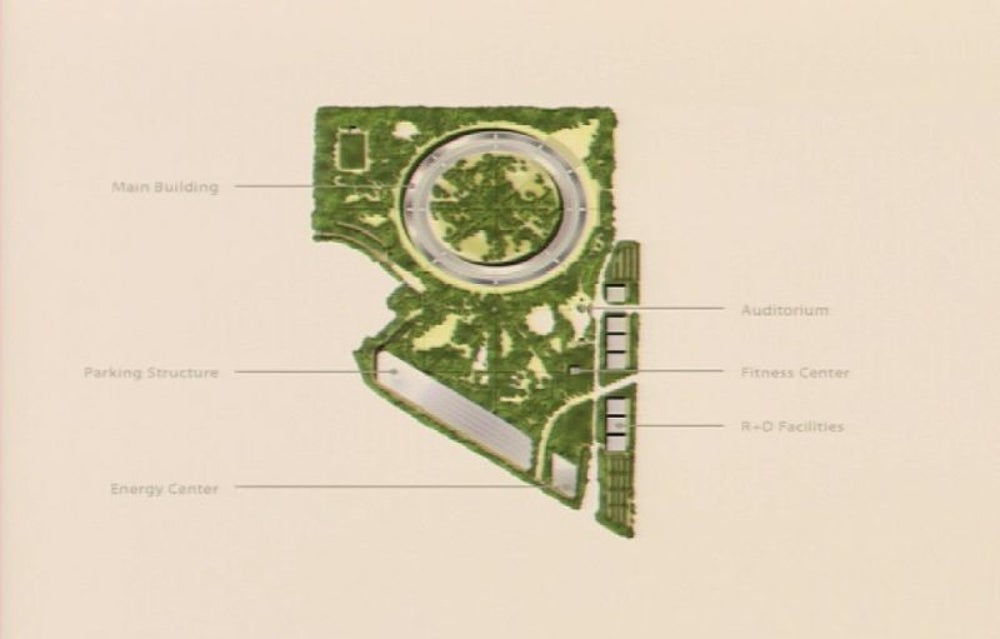 This could be the new location for all the gadget launches.

On the campus, there will be a 1,000-seat auditorium that will be named the Steve Jobs Theater. It is a 20-foot-high glass cylinder that is 165 feet in diameter and has a metallic carbon-fiber roof. It is going to be situated on a hilltop at one of the highest points of the property with a view of the meadows and the main building. Steve Jobs was known for theatrical product launches, and instead of renting out a space for future events, the company could use the space it has in house.

It is being designed with the same care given to the company’s devices. 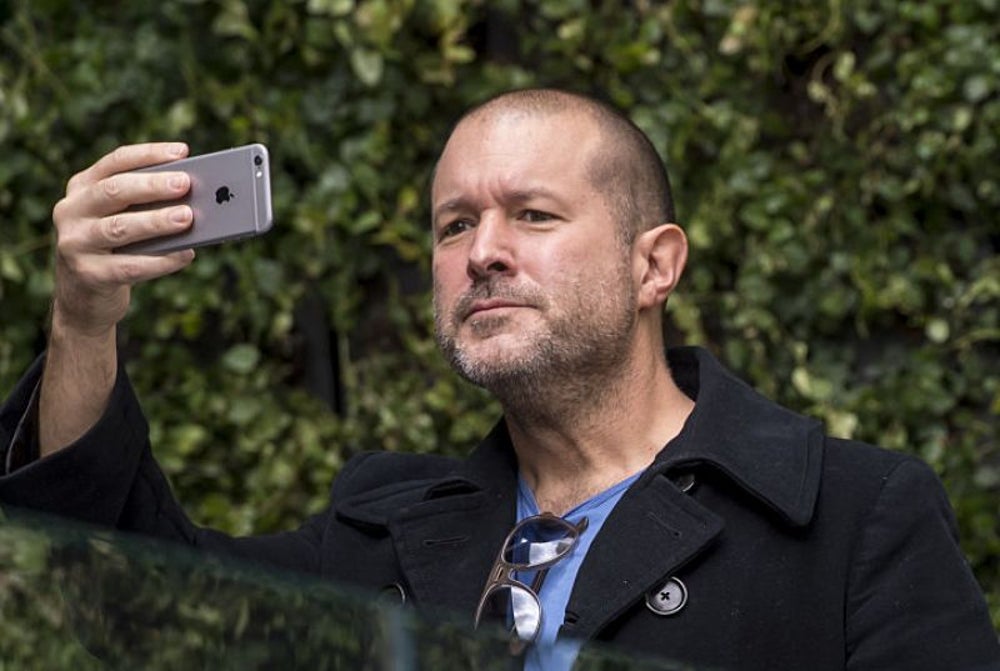 For a company as focused on aesthetics as Apple, it’s unsurprising that Apple’s lead designer, Jony Ive, would oversee the design team for the building along with acclaimed British architect Norman Foster. The smallest of details are key, down to the color of the glass panels of the windows and the best angle to set the panes so that streaks wouldn’t be left behind after rain.

For example, an interview with Ive in design publication Wallpaper revealed that the Steve Jobs Auditorium boasts a thoughtfully crafted 80-ton carbon fiber roof tested and built in Dubai and Poltrona Frau designer seats that cost $14,000 -- although whether that is per chair or per row is still somewhat unclear.

You’ll be safe there in an earthquake. 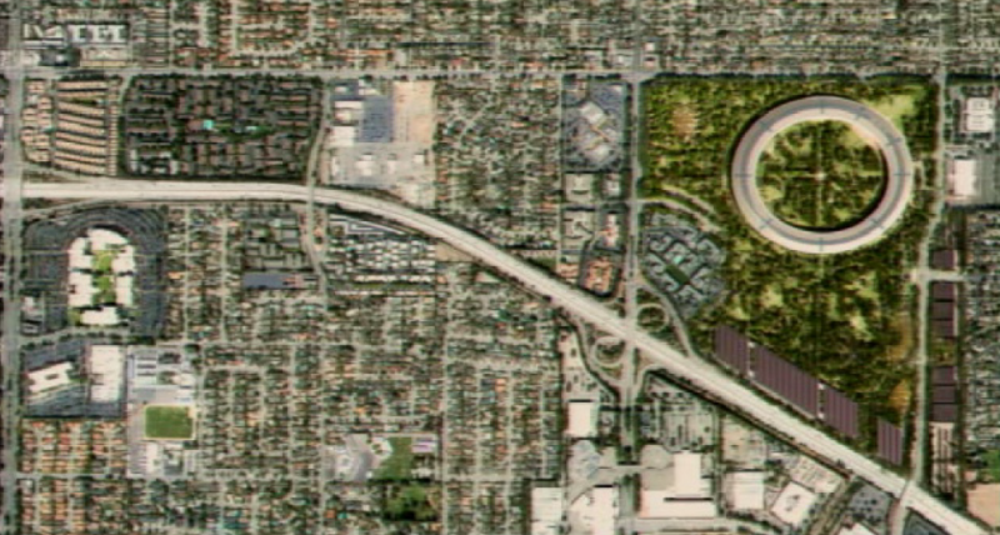 Image credit: Apple
The Ring is built on top of big steel shock absorbers that make it possible for the building to move up to 4.5 feet in any direction in the event of an earthquake without losing its key functions.

The building is powered by the sun. 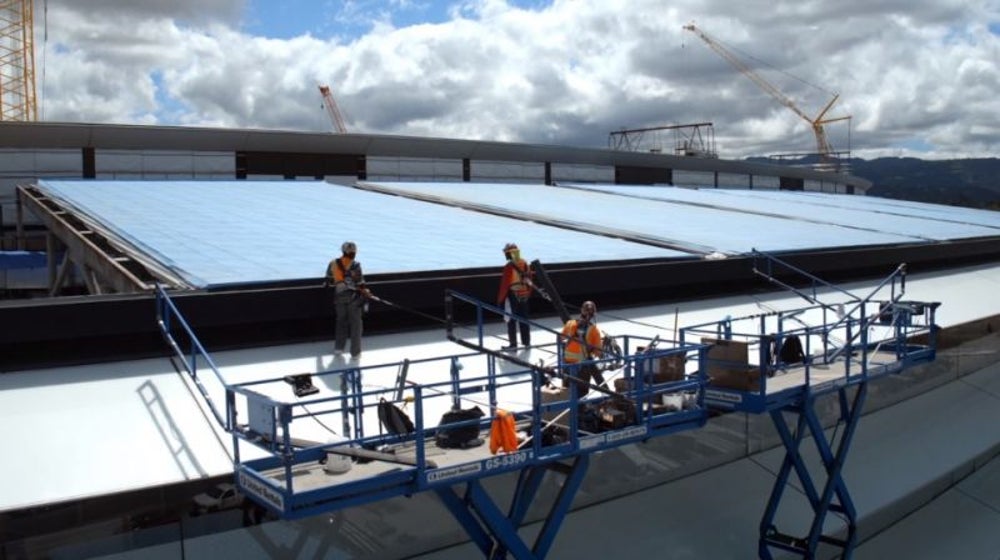 Image credit: Apple
The Ring will be powered entirely by solar energy that is predominantly derived from the 805,000 solar arrays set up around the campus.

Outdoor dining will be available. 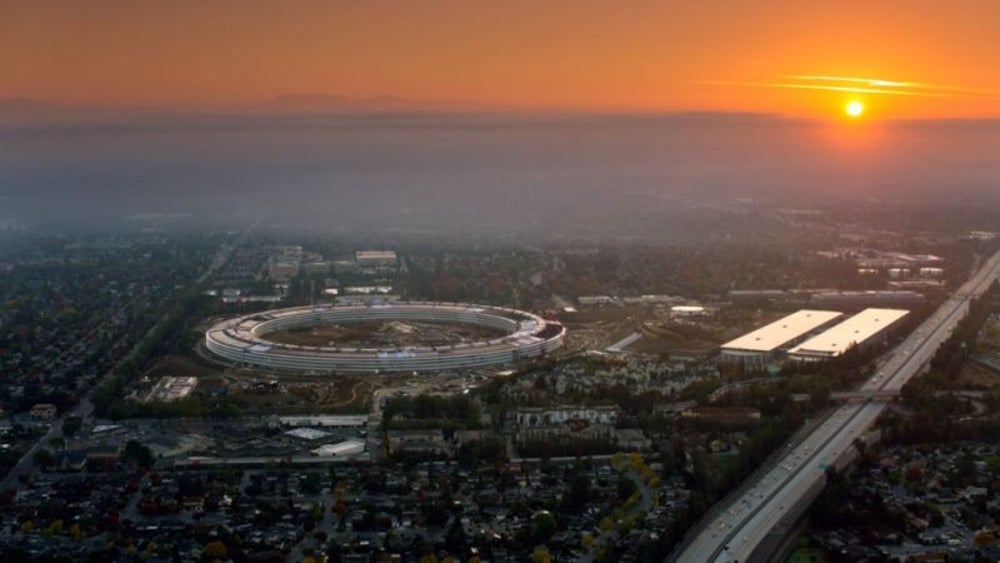 The café on the new campus has two giant glass doors that weigh 440,000 each and open and close without sound due to machinery that is hidden underground. The doors can be opened during the warmer months so employees can eat outside.

Who needs to walk outside anyway? 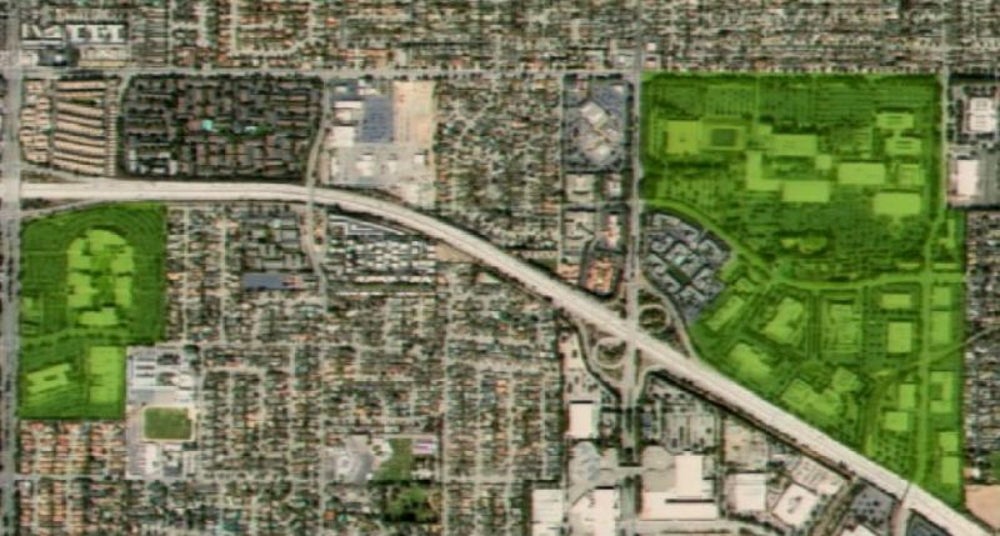 Image credit: Apple
A 775-foot long tunnel designed with white tile links together Wolf Road, the campus and the parking garage underneath the Ring. Apparently, the company built a prototype of the corner of the tunnel to be approved by Jony Ive and his team before construction began. 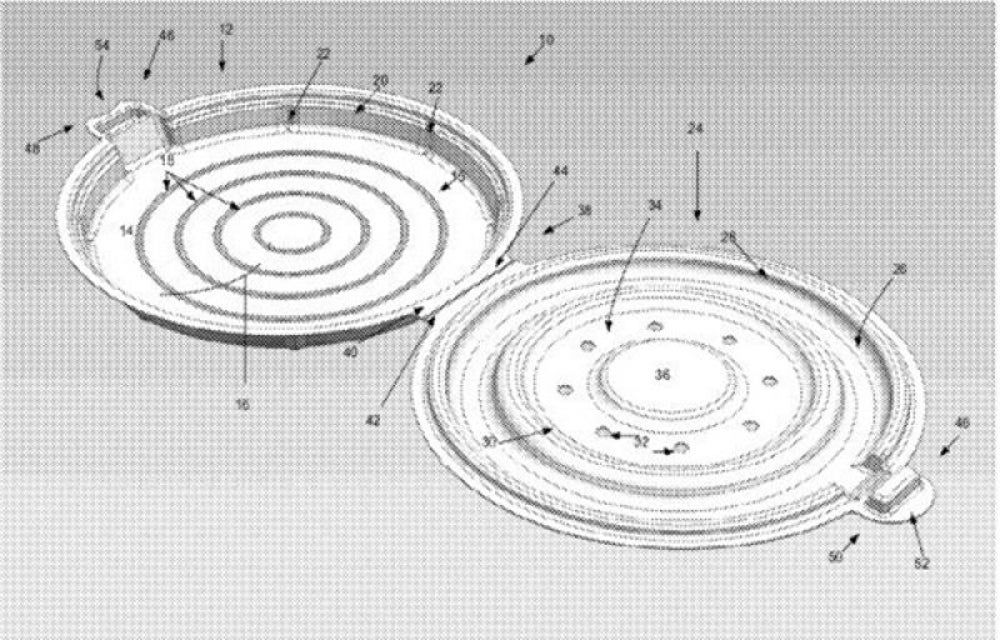 The dining options for both employees and visitors at the new campus are being overseen by Francesco Longoni, the company’s head of food service. But it seems that Longoni is an inventor as well. Back in 2010, there was a patent filed for a pizza box designed specially to allow moisture to escape and keep the food from getting soggy. The patent and design were revealed during the course of Wired’s peek behind the curtain at the construction of the new buildings. 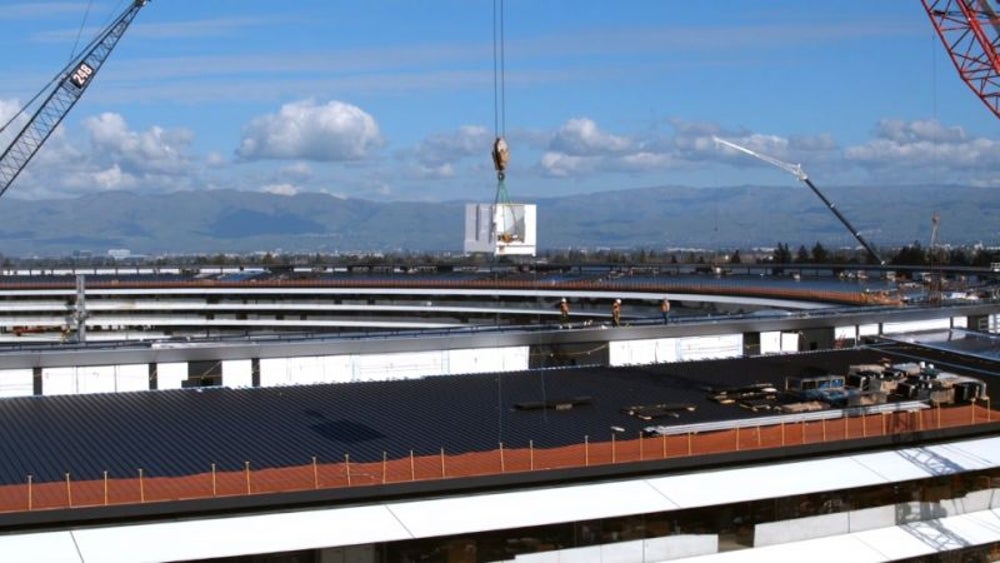 The campus is going to be home to one of the biggest on-site solar energy installations on the planet. It is also going to be the world’s biggest naturally ventilated building, which means that it isn’t going to have to be heated or air conditioned for nine months out of the year. This is in line with the environmentally friendly mission behind the campus -- and the fact that apparently Jobs hated air conditioning.