A Day in the Life of Billionaire Richard Branson, Who Always Carries a Pen, Despises Ties and Drinks Up to 20 Cups of Tea a Day

Sir Richard Branson has had quite a life.
Next Article


Sir Richard Branson has had quite a life.

After founding Virgin Records in 1972, the mogul went on to establish the Virgin Group conglomerate, get knighted by the Queen of England and accrue a personal fortune of about $5 billion, according to Forbes.

The business magnate is now famous for his globe-trotting adventures and his casual, mischievous attitude. This is the man who once took a hilarious photo with a Virgin employee he caught napping on the job, after all.

According to Virgin's website, Branson doesn't intend to retire and "spends most of his time working on not-for-profit initiatives."

Branson himself broke his daily schedule down in a blog post in April. Every day is different for the jet-setting billionaire, but here are some highlights from his usual schedule. 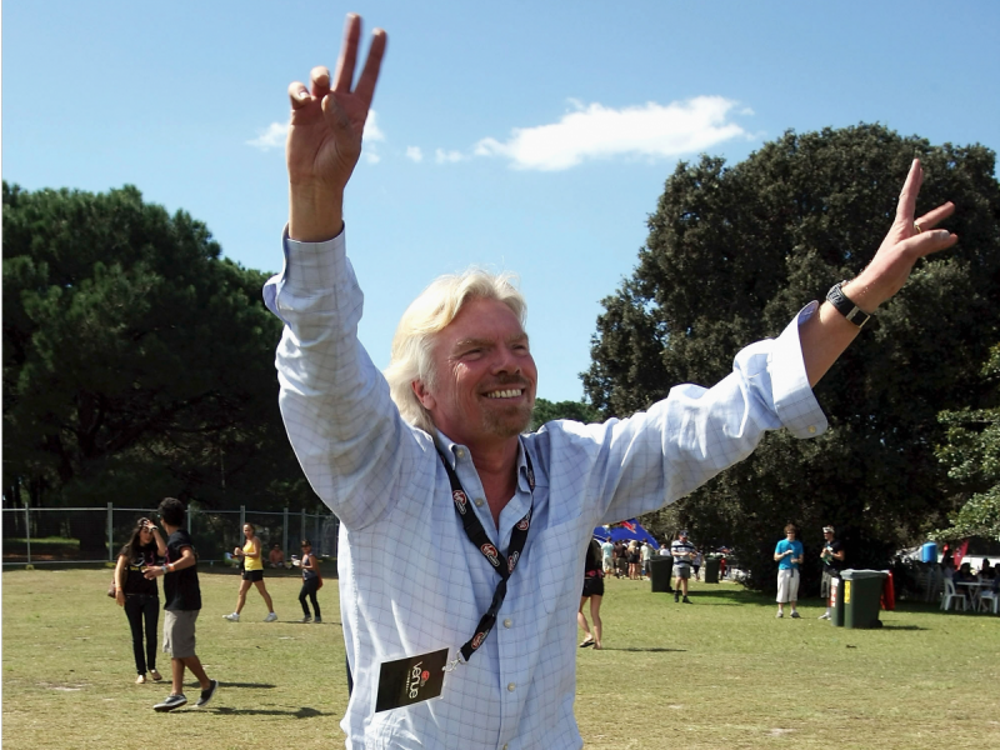 Branson wakes up at 5 a.m. every day. "Getting up and at it early gives me time to get on top of things, and chart my day effectively," he wrote in a 2014 blog post.

He makes time for family and breakfast. 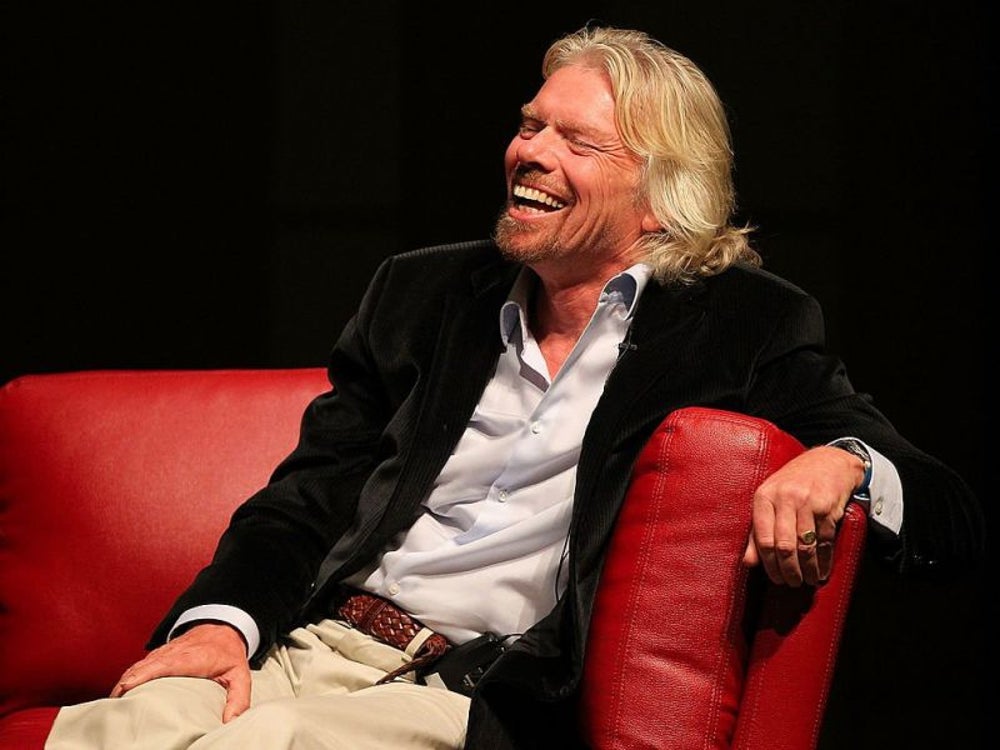 He carves out plenty of time to spend with his family and eat breakfast. "Not only does this help them know how important they are to me, but it also grounds me before I start my day," he wrote. 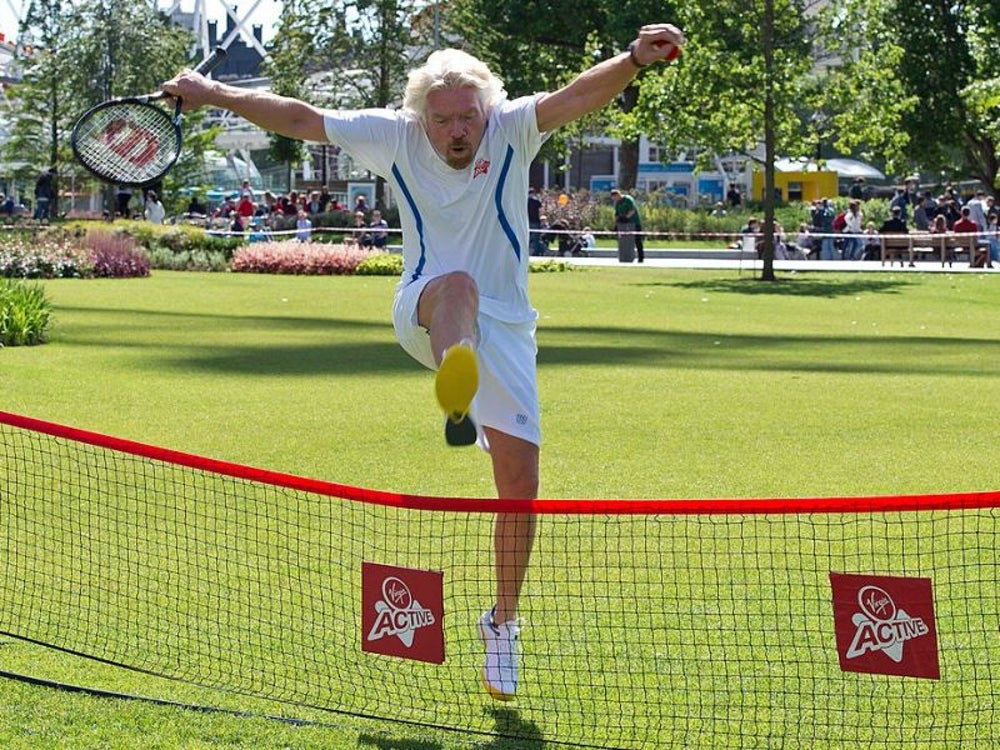 Once he's up, he's ready to move. Some of his favorite activities include kite-surfing, swimming, cycling and tennis. Virgin's website says the founder has a "mean tennis serve." 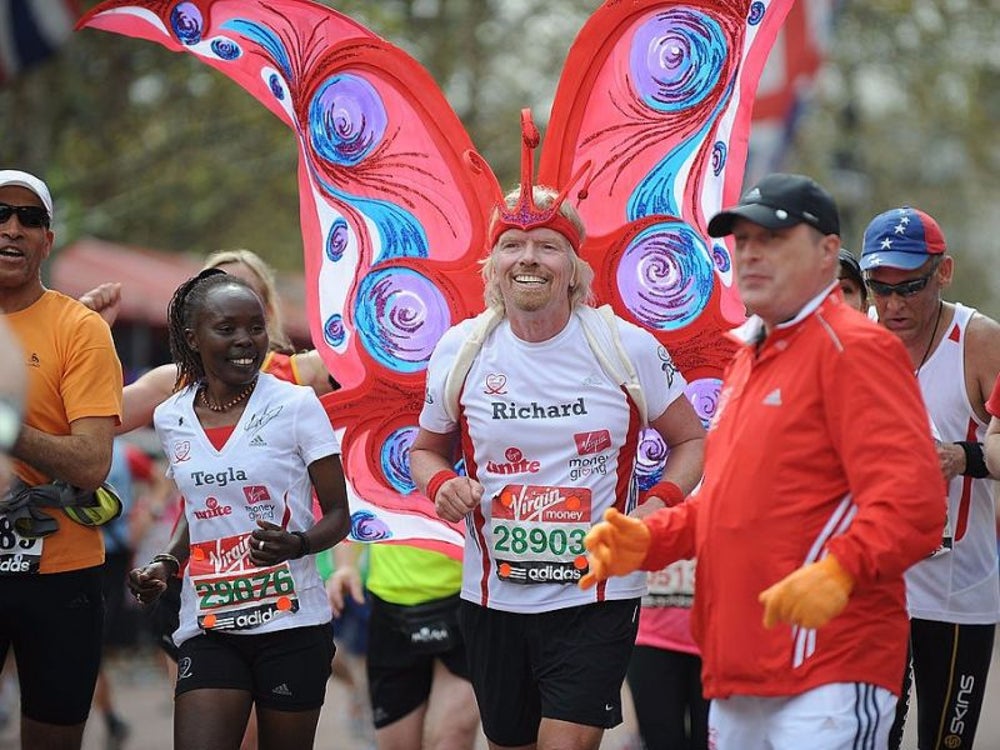 In 2010, he ran a marathon in London while dressed as a butterfly.

He likes to have a good time. 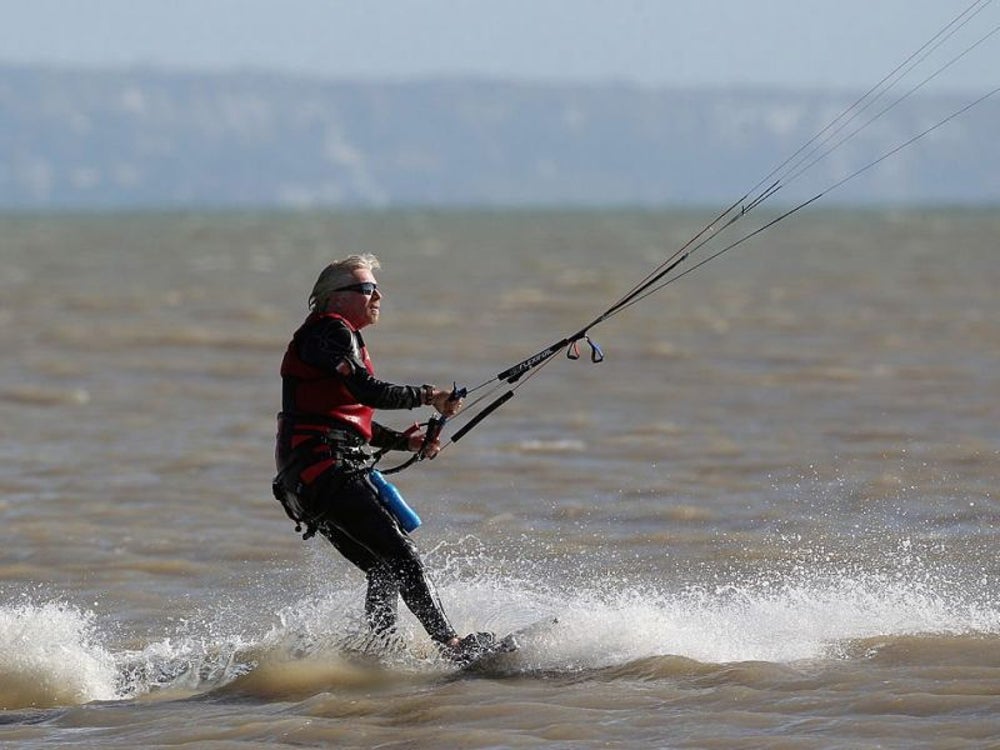 In 2009, he kite-surfed with a naked model on his back. In February, he hit the waves to compete against former U.S. President Barack Obama.

He really likes to kite-surf. 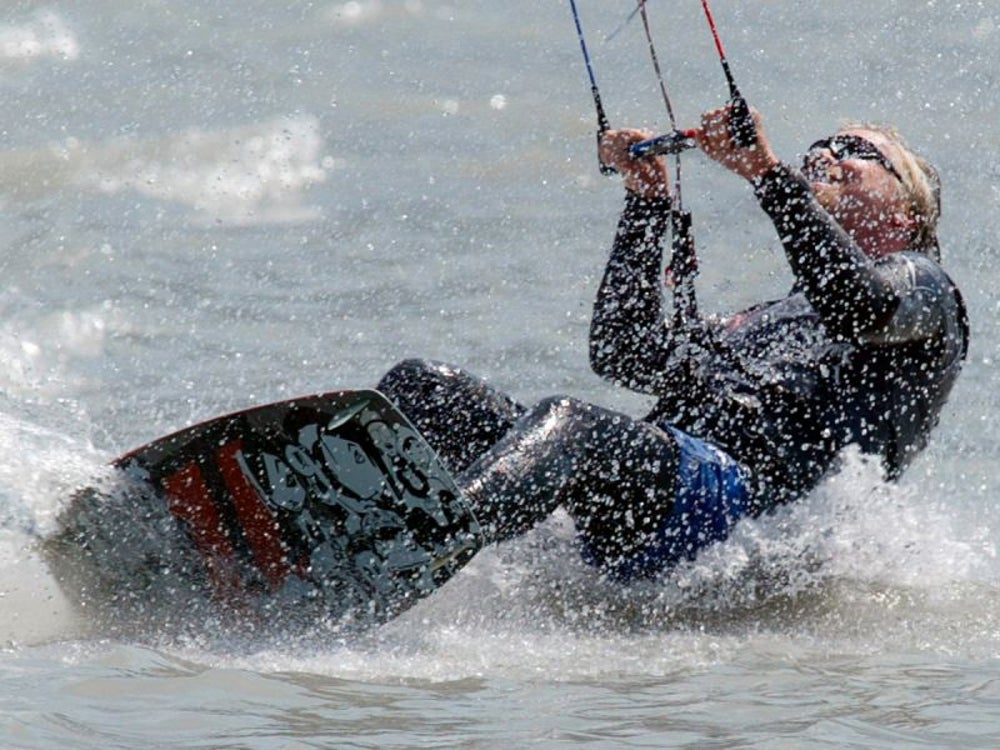 In a blog post, he wrote that he'd recommend kite-surfing to anyone with access to a body of water.

He loves getting an adrenaline rush. 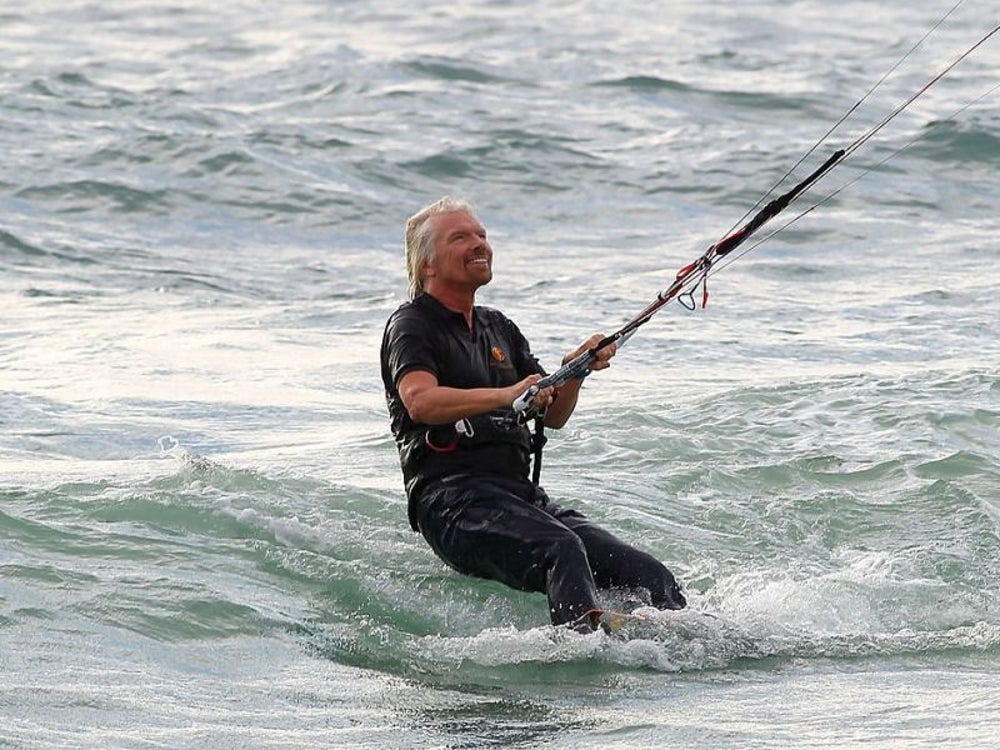 "There's nothing quite like the feeling of freedom, exhilaration and oneness with nature that comes from kiting -- and the extraordinary rush of adrenaline it gives you," he wrote in a blog post.

He lives in the British Virgin Islands. 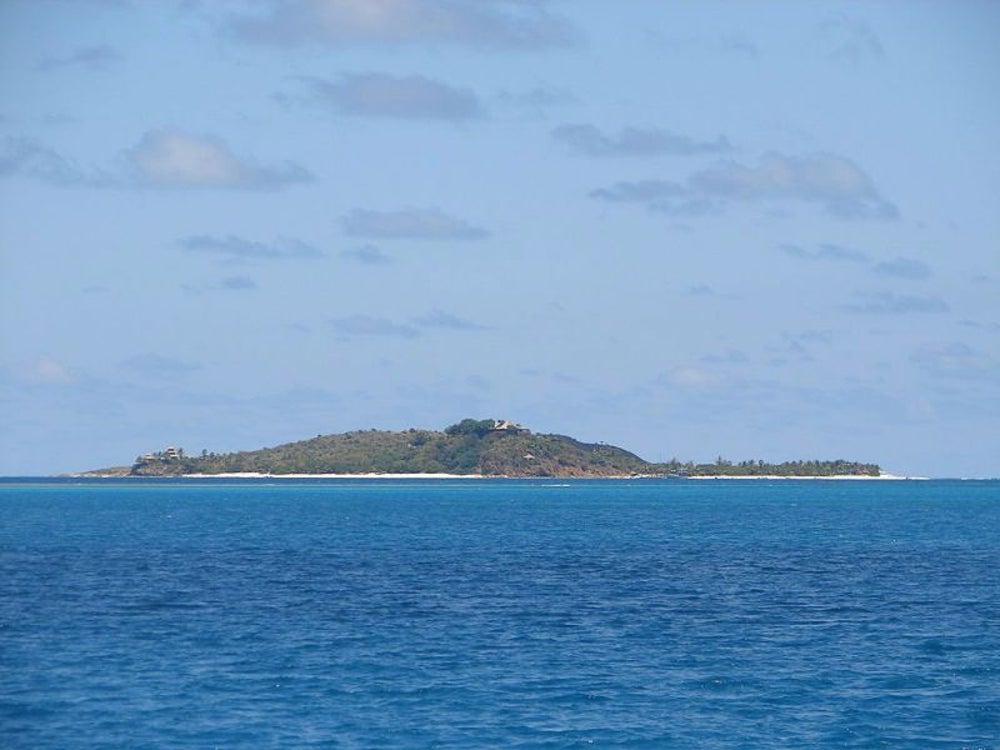 Getting an early start to the day isn't only about exercising. Branson lives on Necker Island in the British Virgin Islands, which he bought for about $320,000 in 1979. "Living in the BVI, I like to be online early, so that I am accessible and available to our offices in other time zones," he wrote.

He likes to get ahead. 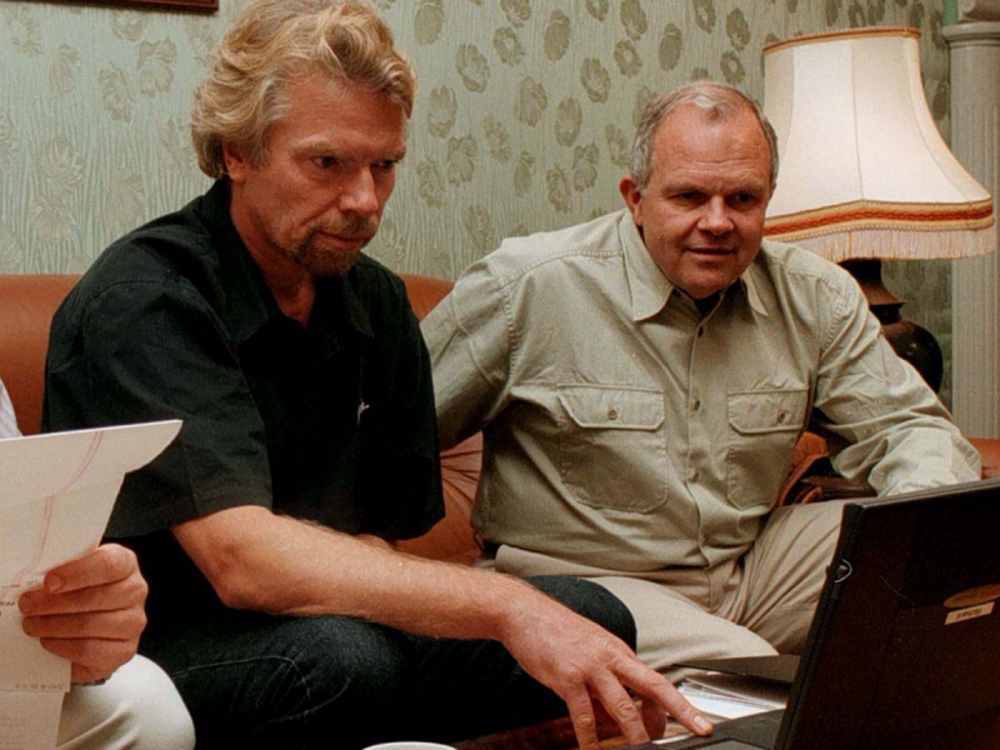 "I can work through my emails before most of the world logs on," he wrote. 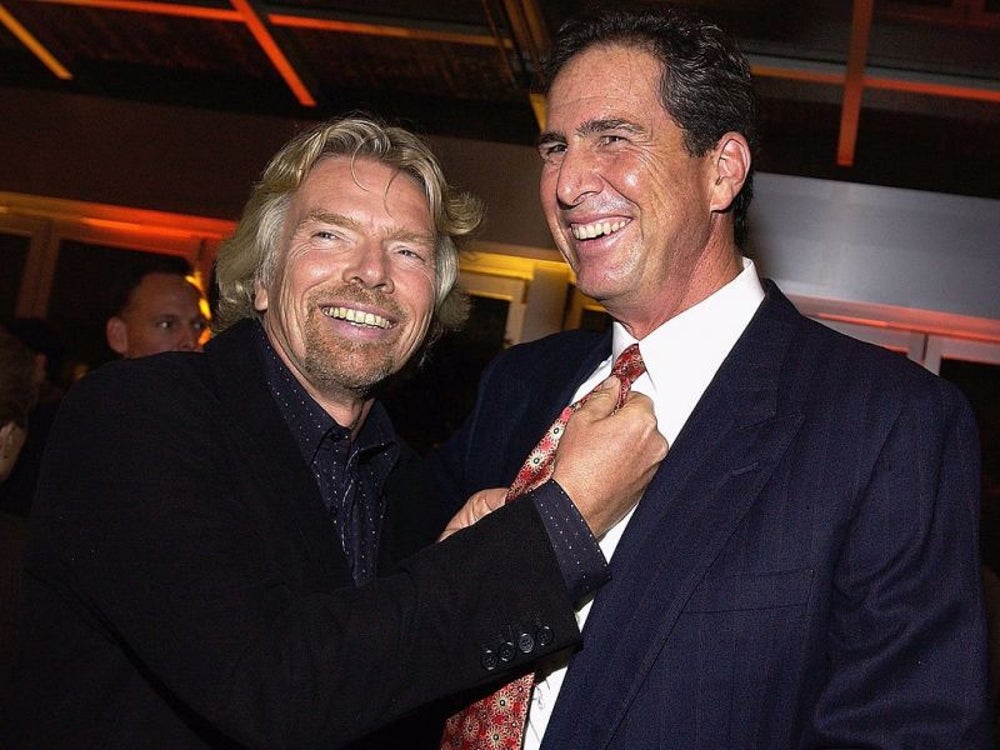 Back at the office, Branson doesn't don fancy suits and designer ties. "I hate ties. I can't understand how ties ever caught on," he told the Wall Street Journal in 2014.

He'll cut off others' ties. 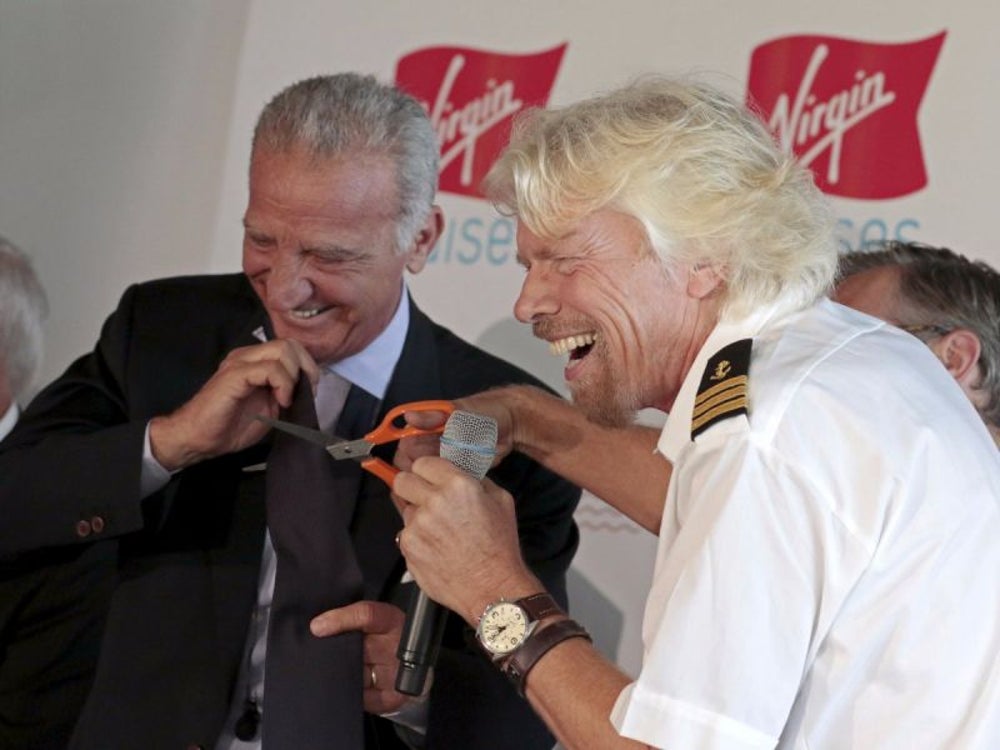 In fact, his famous hatred of ties has prompted Branson to snip them off peoples' necks. 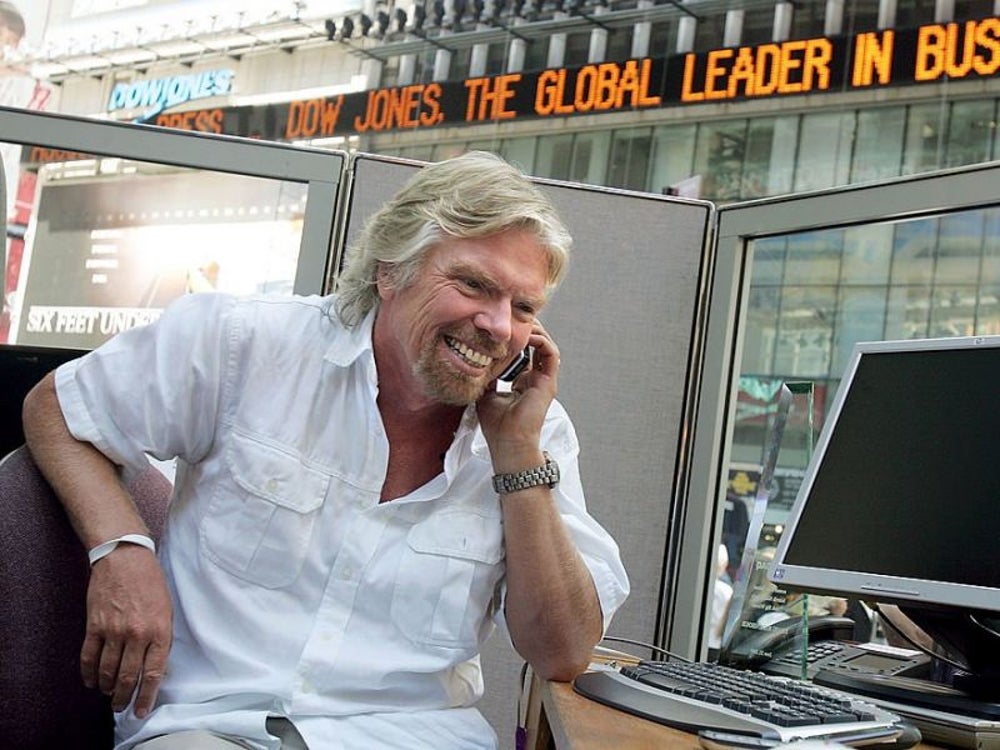 He spends his workdays staying on top of business, checking his various social media platforms, reading the news and keeping in touch with his employees.

He's in-touch with his teams. 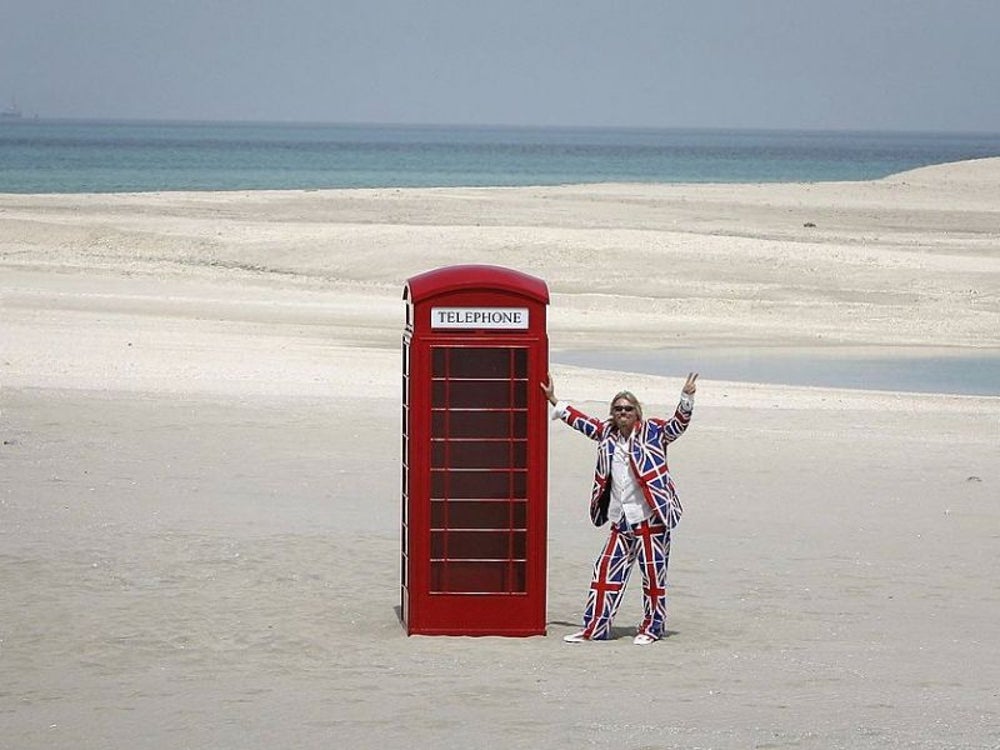 "Being a modern business leader is all about having your finger on the pulse and knowing what you're talking about. I'm always checking in with our Virgin teams," Branson wrote on his blog.

He writes everything down. 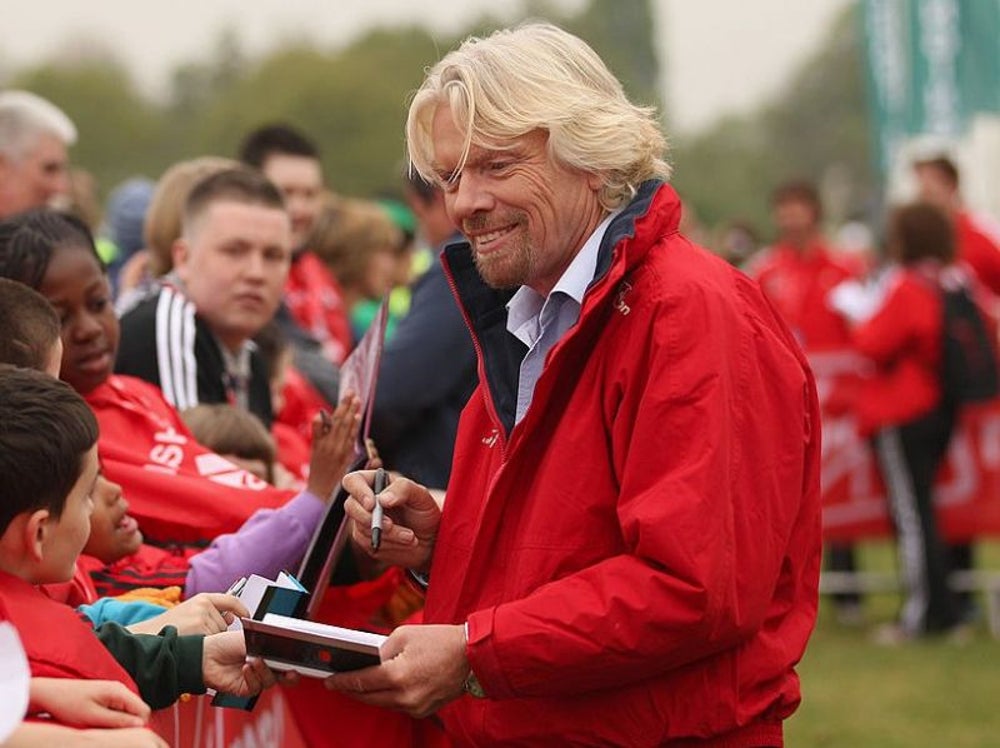 Carrying a notebook also keeps him on track. "My secret 'life hack' has also been to write it down! I can't tell you where I'd be if I hadn't had a pen on hand to write down my ideas as soon as they came to me," Branson wrote in a blog post. 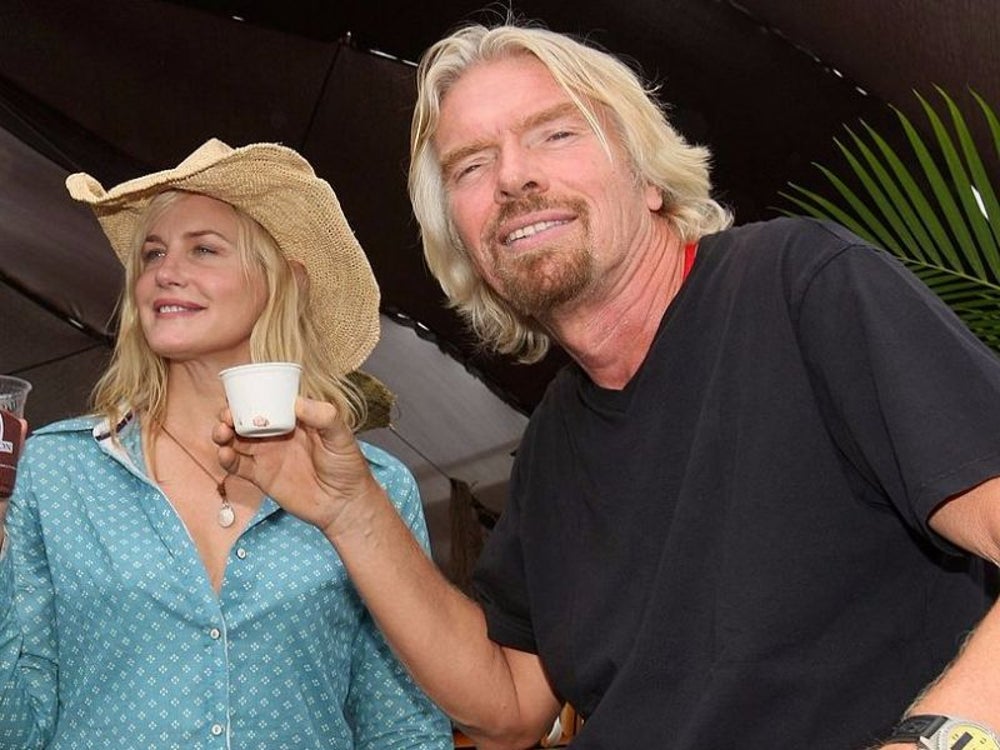 To keep up his energy throughout the day, Branson drinks up to 20 cups of tea -- white, no sugar. 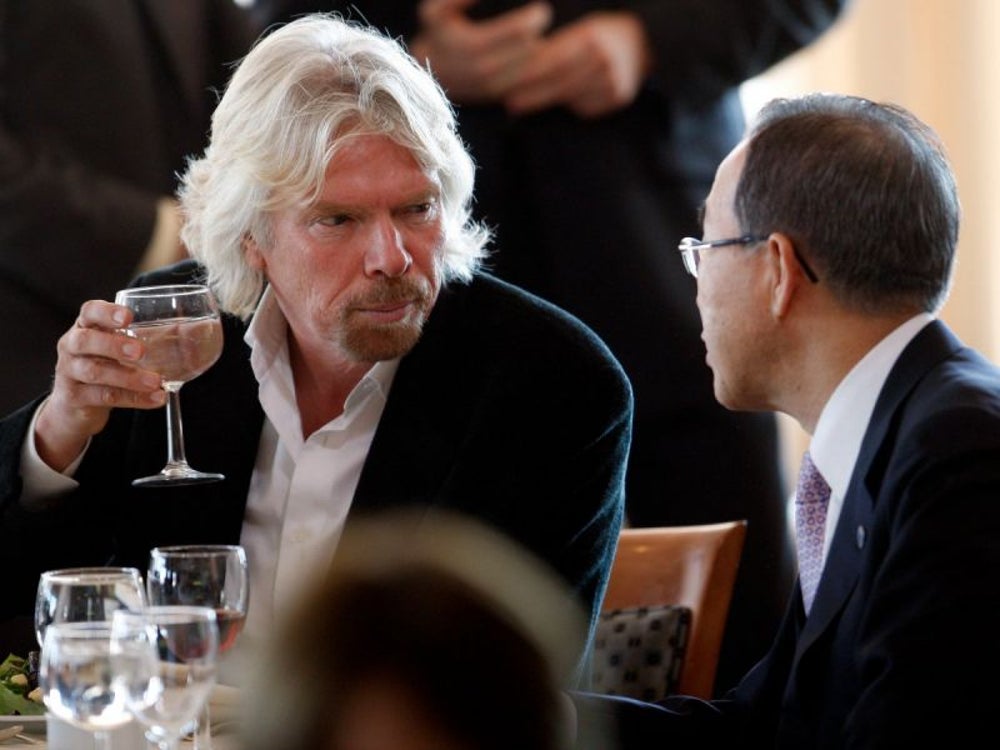 When it comes to food, Virgin's website reports that Branson enjoys egg sandwiches, along with "his wife's stews, shepherds pie or a Great British roast dinner."

He likes to play chess. 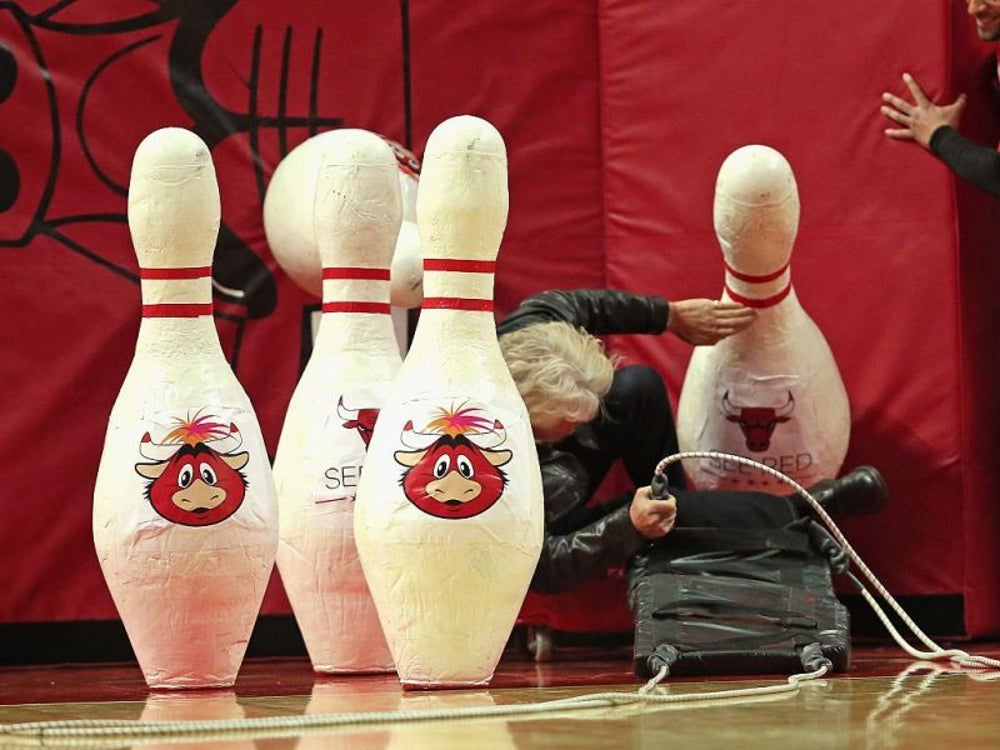 The Virgin founder has many hobbies, like playing chess. Some of his past times, however, are somewhat unusual ... 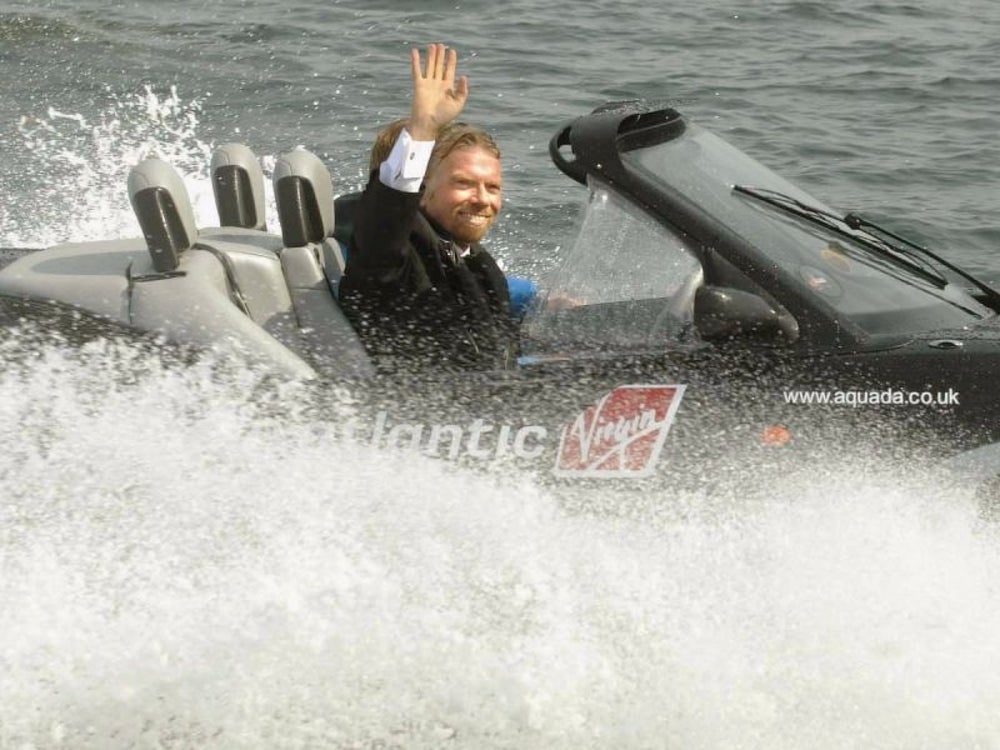 ... like constantly striving to break world records. In 1985, Branson's boat, the Virgin Atlantic Challenger, sunk just before breaking the trans-Atlantic speed record. Branson and the crew were rescued, and went on to break the record in 1986. 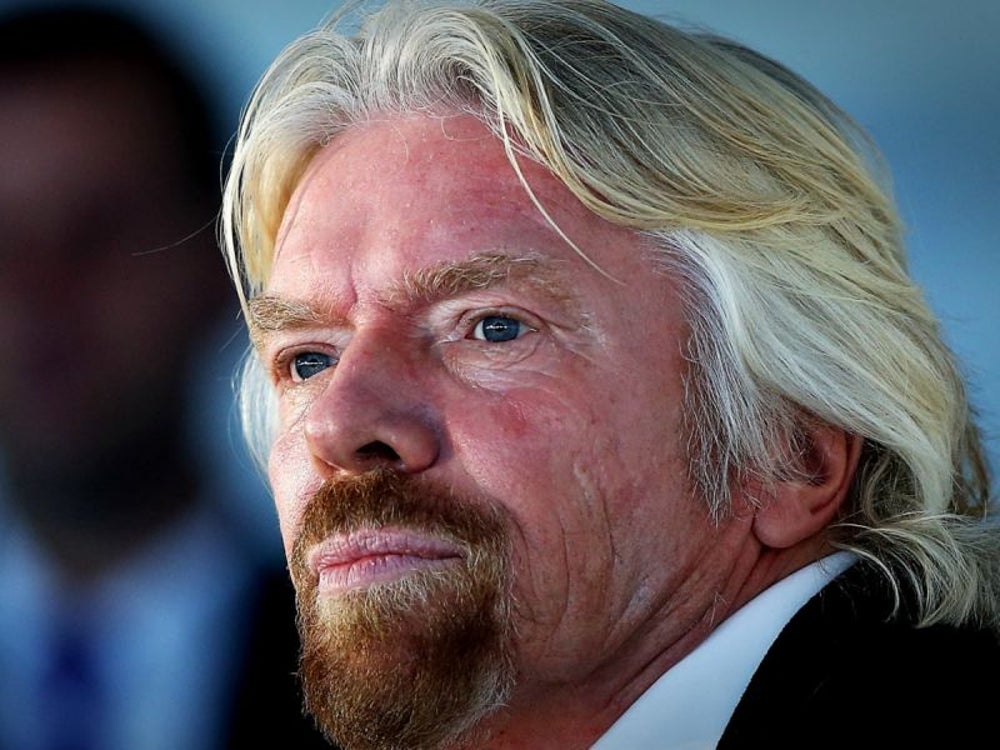 To stay focused and relaxed amid his work and extreme hobbies, Branson takes some time to practice yoga and tai chi during the day.

He made a cameo appearance in "Casino Royale."

He's not a big TV watcher, but he does enjoy the odd movie -- he even made a cameo appearance in Casino Royale -- and listens to Peter Gabriel, Mike Oldfield and The Sex Pistols. 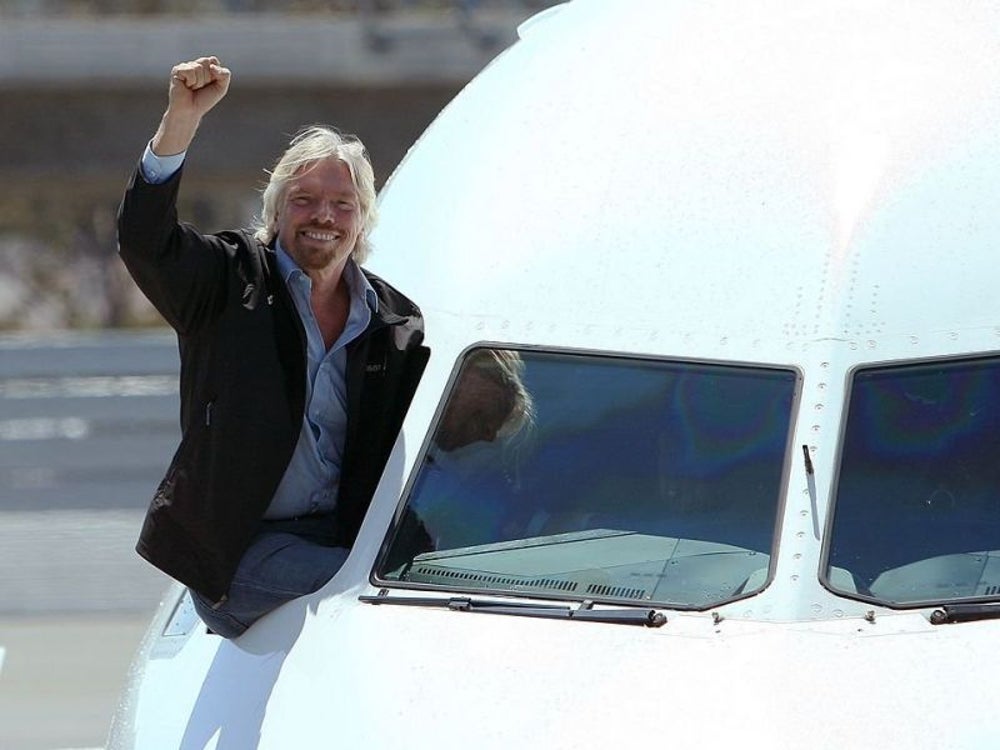 After enjoying dinner with family and friends, Branson hits the hay around 11 p.m. every night. He says he usually requires about six hours of shut-eye.

He believes life is an adventure. 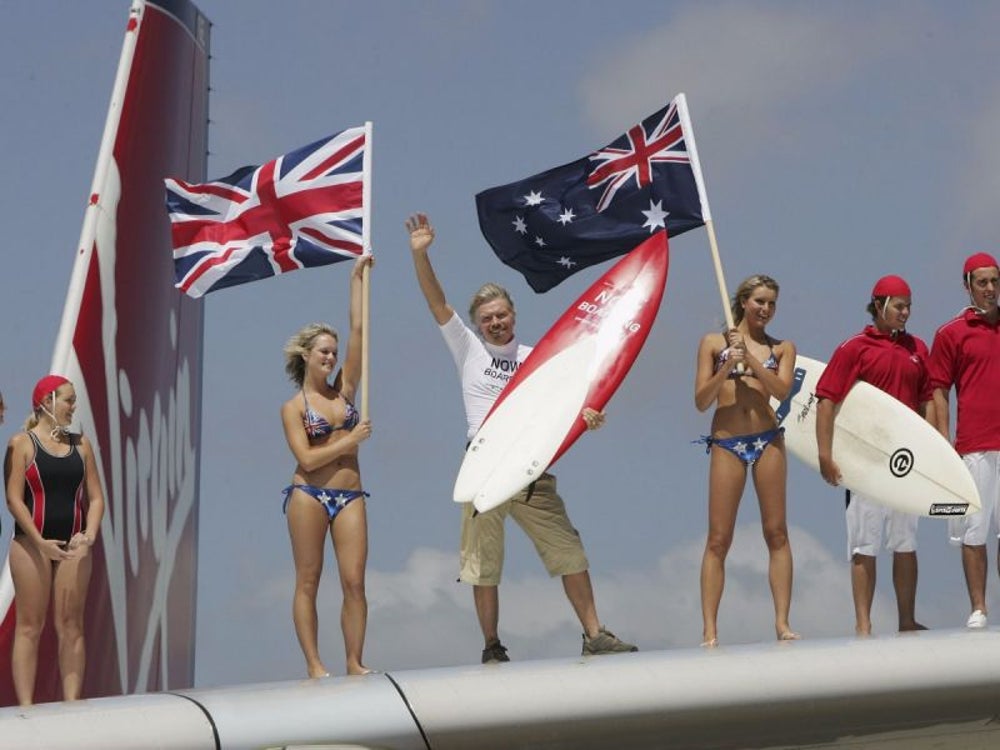 Branson says it's important to approach life with a sense of adventure: "The spirit of adventure motivates us to set goals, push ourselves, thrive in the face of hardship and achieve epic feats."