My Amazing and Inspirational Trip to Barcelona

Traveling is vital for every entrepreneur. Here's how to spend your time and money while in Barcelona.
Next Article

This past month, I spent time in Barcelona, Spain, with my girlfriend. Barcelona exceeded every expectation we had, from the rich history, the delectable 12-course meals, the extravagant beaches, cultural masterpieces to the entrepreneurial friendly ecosystem.

Here are top suggestions on how to spend your time and money when traveling to Barcelona. 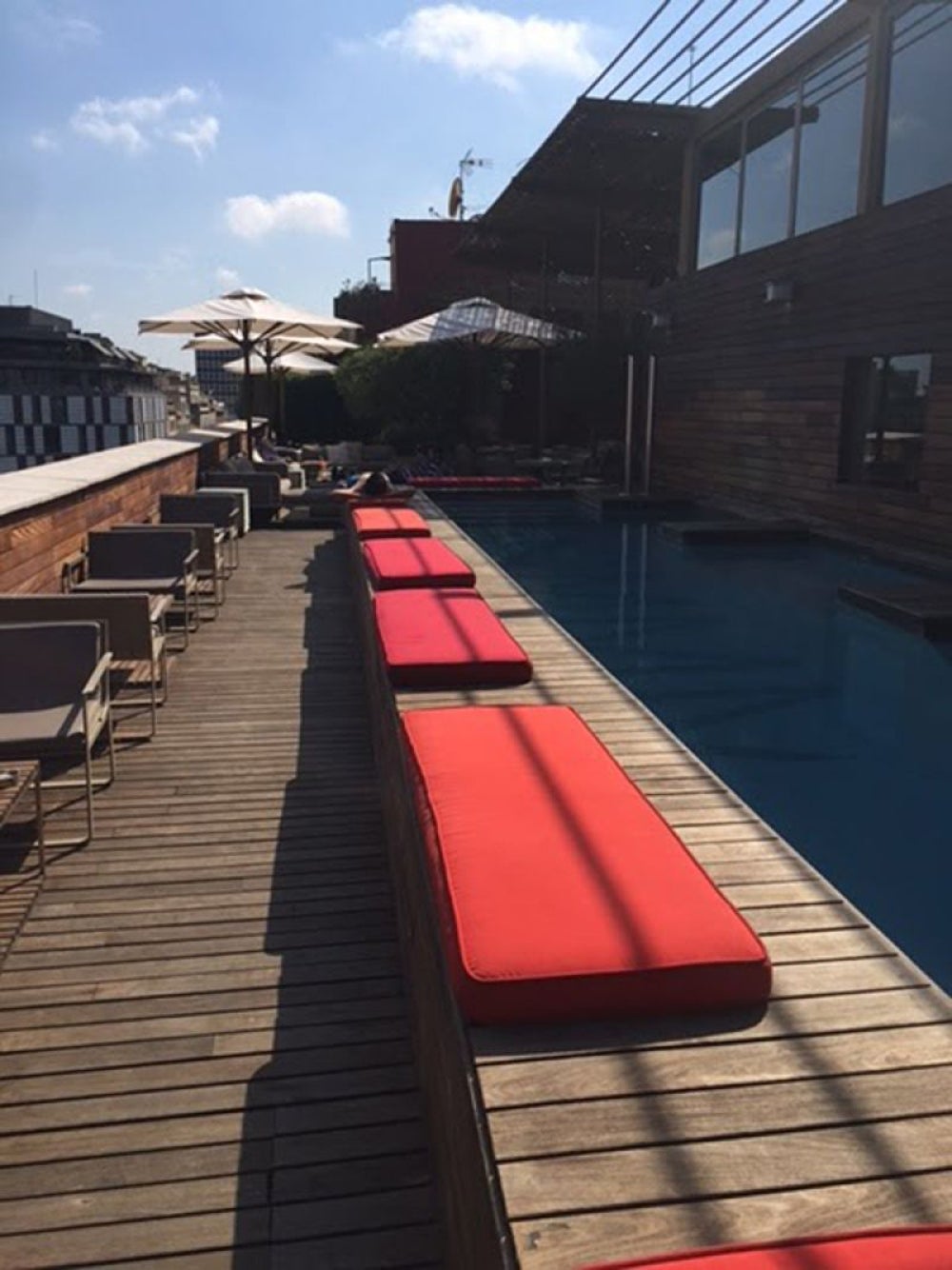 Image credit: Andrew Medal
Hotel Omm was our first stop. This modern boutique hotel located in the heart of Barcelona is just steps away from the luxurious shops of Paseo de Gracia. It’s a gorgeous area. My personal favorite at the hotel was the baller rooftop pool, where I spent many hours hanging, reading and working. 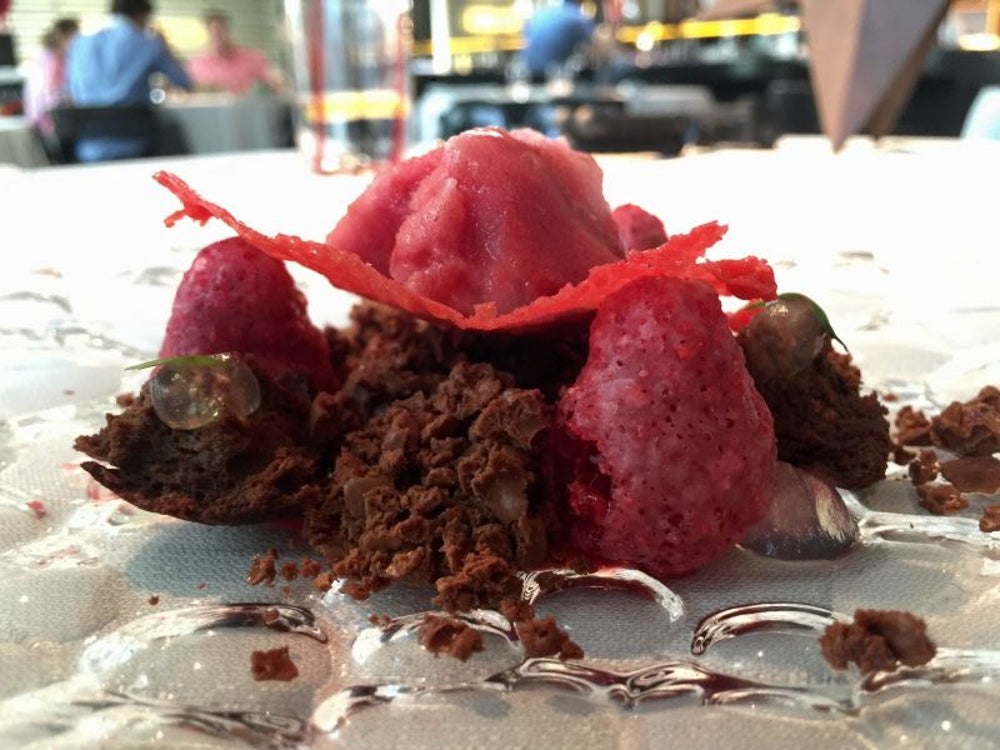 Our evenings were spent eating and gobbling desserts (such as a chocolate induced sorbet fluffy pastry) on the beautiful rooftop terrace, enjoying the sunset with stunning views of Gaudi’s Casa Mila, La Sagrada Familia and the twinkling lights of Montjuic. Seeing as how La Rambla was just a quick walk from the hotel, we set out on foot to explore the streets and alleys of Barcelona. 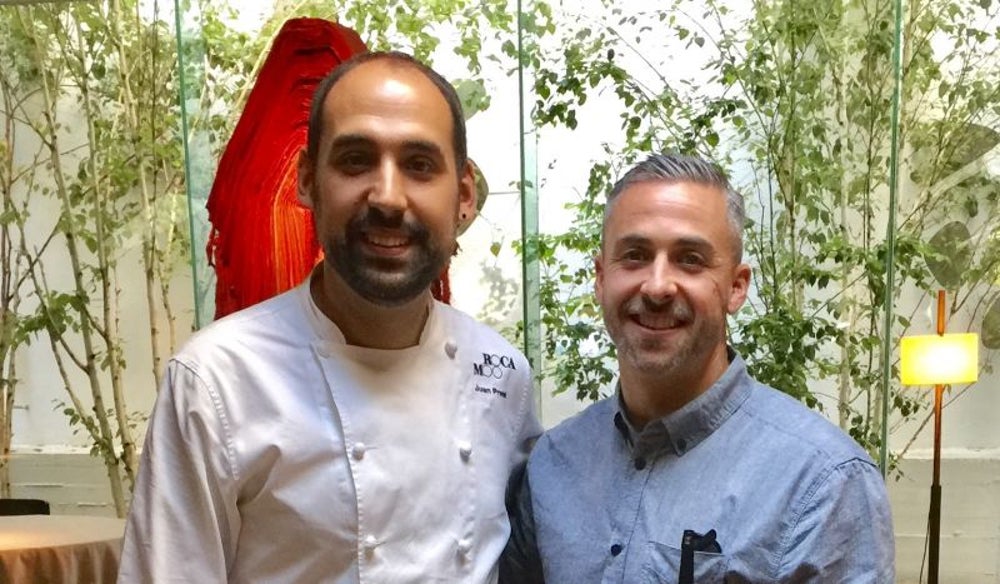 We were treated to a mouthwatering meal at Hotel Omm’s Michelin starred and Repsol Guide rated Restaurant Roca Moo. Chef Juan Pretel (whom we had the pleasure of meeting) had the most imaginative and tasty menu that overwhelmed all five senses. It’s said we first eat with our eyes, and that doesn’t ring truer than with Chef Pretel’s gourmet delicacies.

The restaurant is a modern room with an open kitchen. The service was impeccable and the dishes inventive, from suckling pig to savory mackerel, heavenly sorbets and chocolate souffle. Part of the show and spectacle was watching the wonderful preparation of each dish. I love food, and being served these masterpieces in what felt like a 50-course meal was the perfect afternoon. 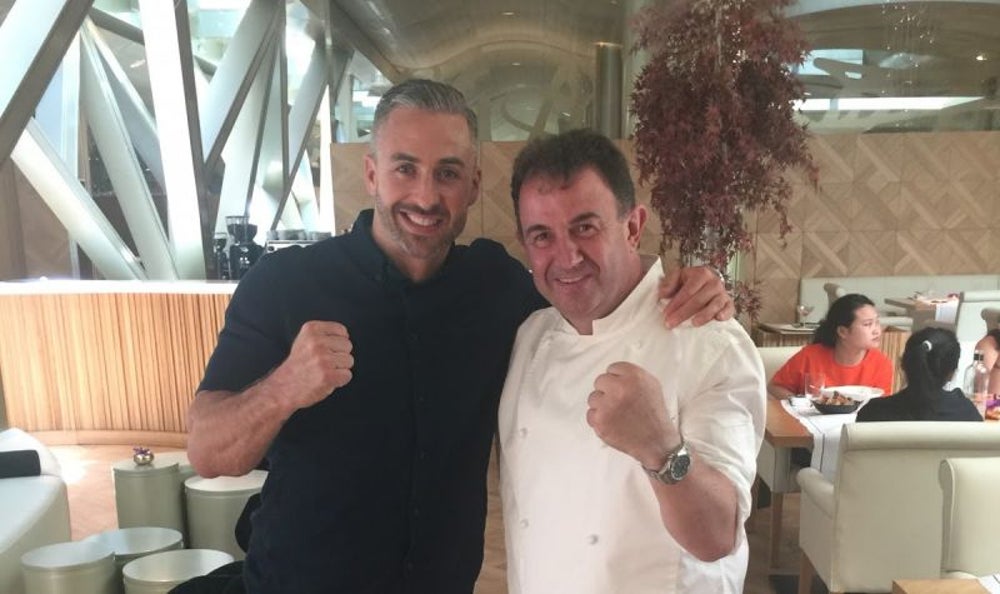 Our next stop was the Monument Hotel, which is located among the shops on Paseo de Gracia. The Monument Hotel is an architectural jewel situated in a late 19th-century building of considerable artistic significance. This family mansion turned hotel is a mixture of modernity, timeless charm and beauty. 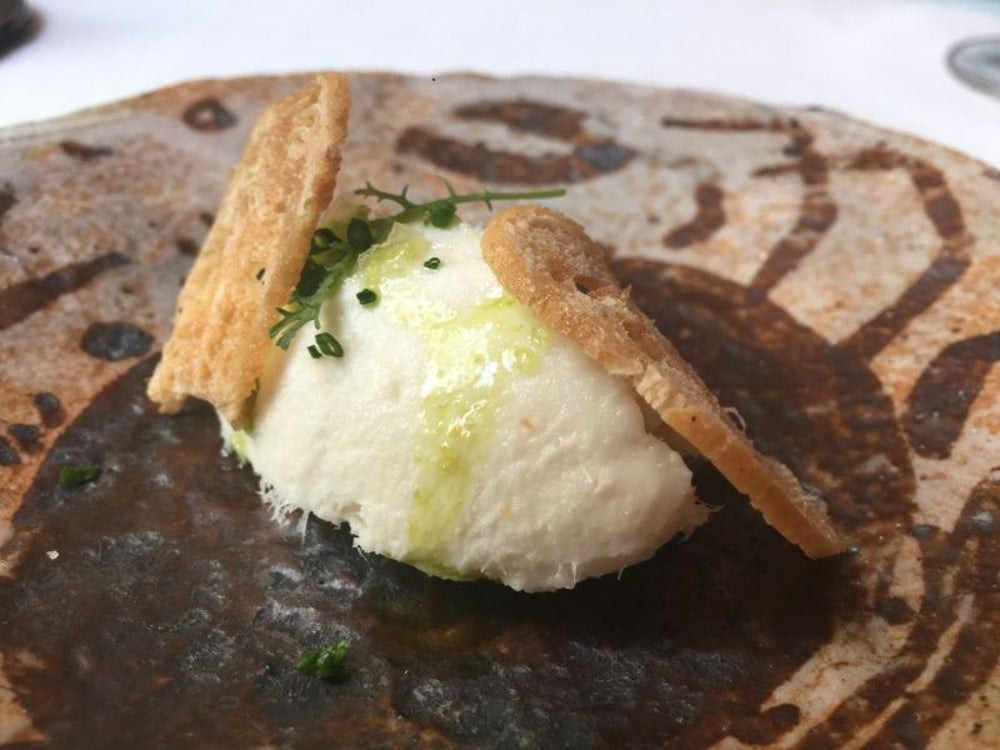 The restaurant itself is a beautiful contemporary space with a soaring ceiling and skylight. Natural light floods the space and a still water light pool adds a stylish serenity to the room. Delicious Iberian pork shoulder melted in our mouth and the soufflé was amazing. The staff was attentive and knowledgeable.

Our siesta lasted especially long after this meal. 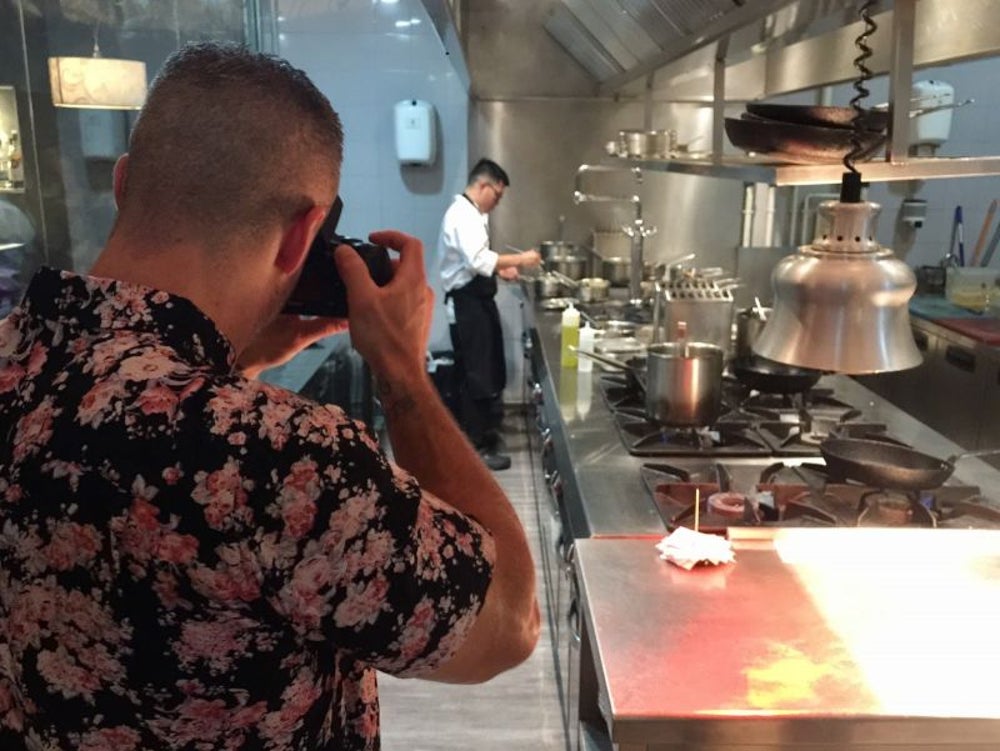 Image credit: Andrew Medal
Acces Restaurant was the next stop on our culinary experience.  I loved the elegant, yet, informal restaurant’s stunning colors and chic decor. And once again the food was sensational -- foams, scallops, foie gras and sumptuous dishes prepared in an open kitchen where the chefs can be observed constructing each dish. 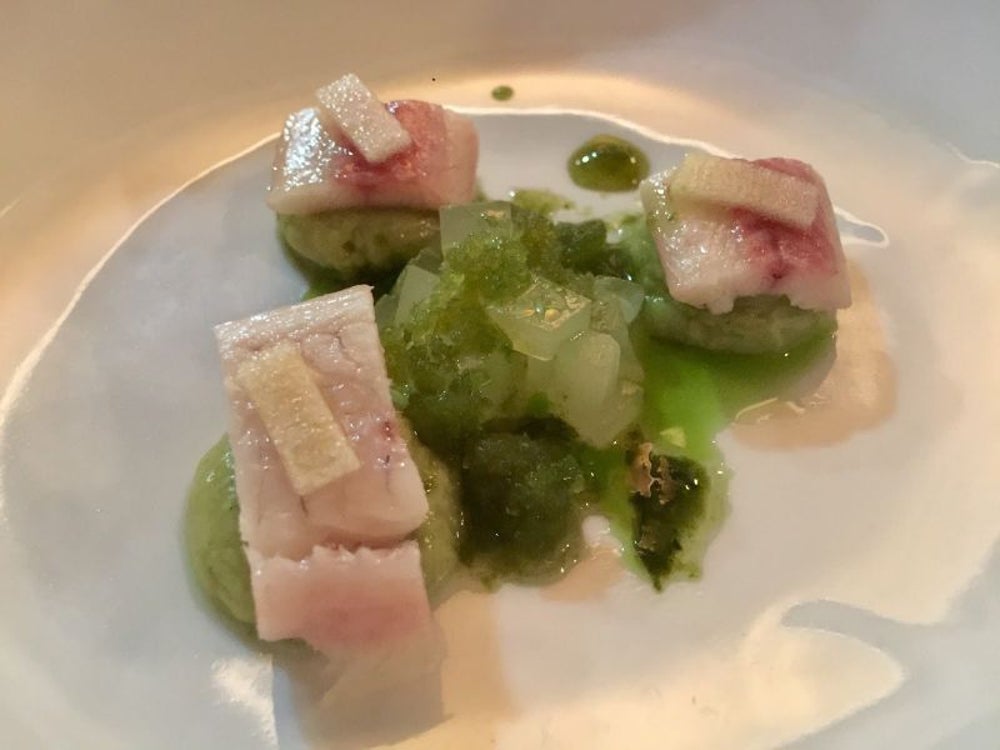 Image credit: Andrew Medal
Chef Fabian Quiles’ Mediterranean inspired menu is inventive and indescribably tasty. Our menu varied from scallops with white truffle oil to baked hake with romesco sauce, to the apple gazpacho with smoked eels, to suckling pig, apple pure with cardamon and jus de viande, with desserts of mint and chocolate foam to salt and olive oil hazelnut cake, I felt like I died and went to culinary heaven. 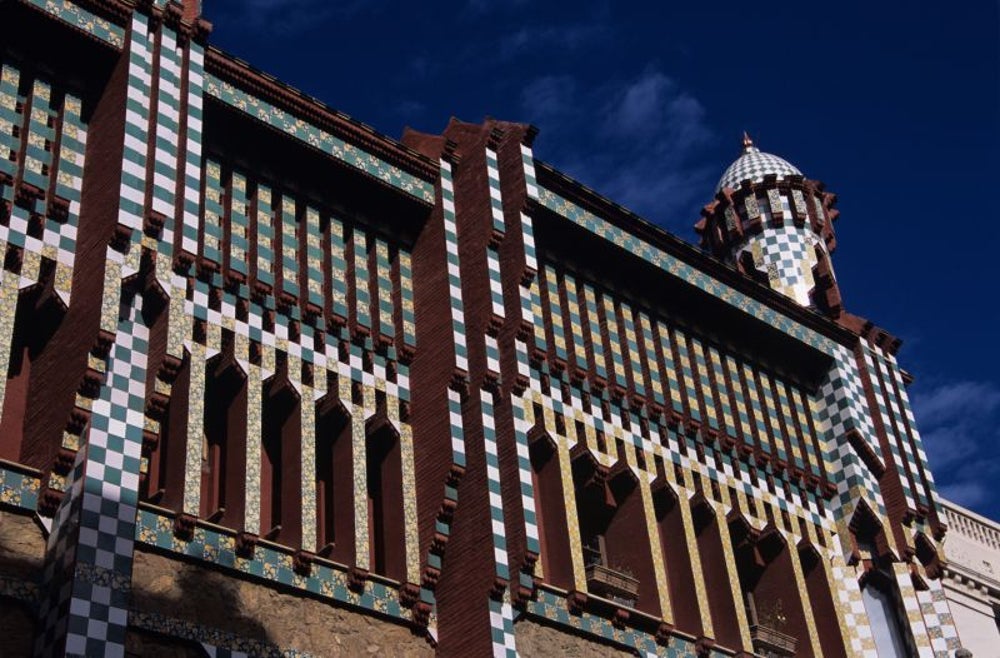 Barcelona is an exciting cosmopolitan city, which offers unusual and well-known buildings of Spain’s most famous architect Antoni Gaudi.

Maybe you don’t know about Gaudi or architecture, but once you start walking the streets of Barcelona you will identify a Gaudí building, as they are distinctively apparent. Antoni Gaudi was an architect from Reus, Catalonia, Spain. He was a practitioner of Catalan Modernism and his style was very individualized, distinctive and dramatic. Gaudi was a true entrepreneur and kept true to his aesthetic style.

Casa Vicens is Gaudí’s first important building, as it was a summer home commissioned by a prominent Barcelona family. This imaginative home has Islamic architecture influences in its façade and some of its rooms. Gaudi liked to use a technique called trencadis, which is a type of mosaic used in Catalan Modernism. Trencadis is created from broken tile shards and is evidenced in the beautiful facade of Casa Vicens. A highlight of walking the streets of Barcelona are the glimpses of Catalan Modernism and Gaudi’s whimsical, wonderful creations. 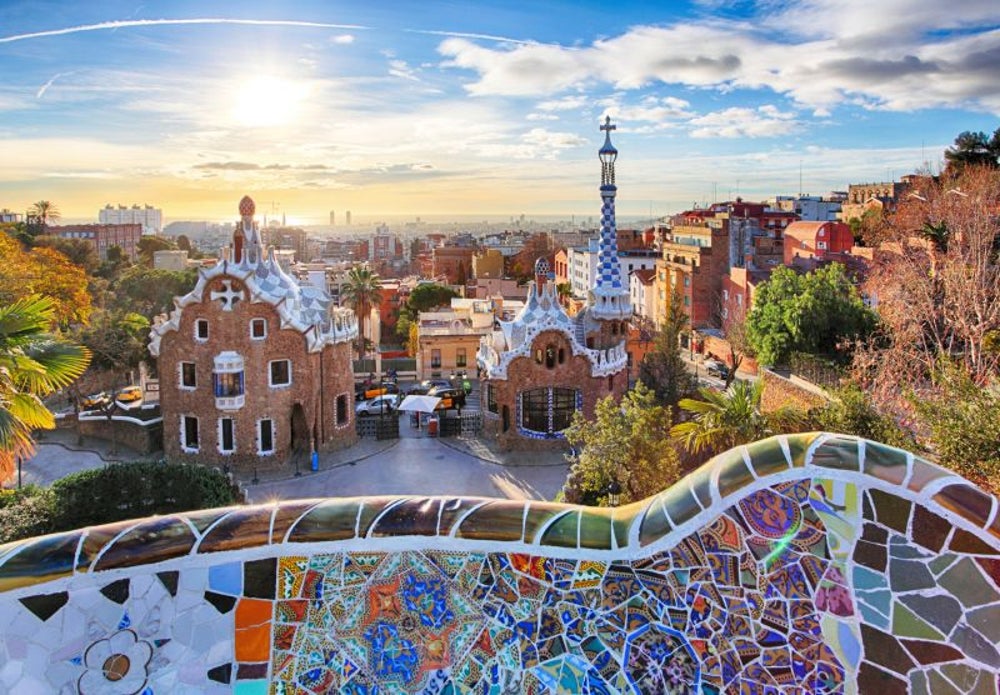 Image credit: TomasSereda | Getty Images
Park Guell is a great way to spend a couple of hours exploring the vast park grounds, monuments and museum. Originally intended to be a closed residential development with about 60 houses, Gaudi built a show home, but the plan fell through and eventually the entire development was purchased by the Barcelona City Council and opened as a public park in 1926. The original show home Gaudi built was turned into a museum and is now known as the Gaudi House Museum. It’s a great place to take a peaceful stroll and enjoy nature while looking at Gaudí’s artwork. 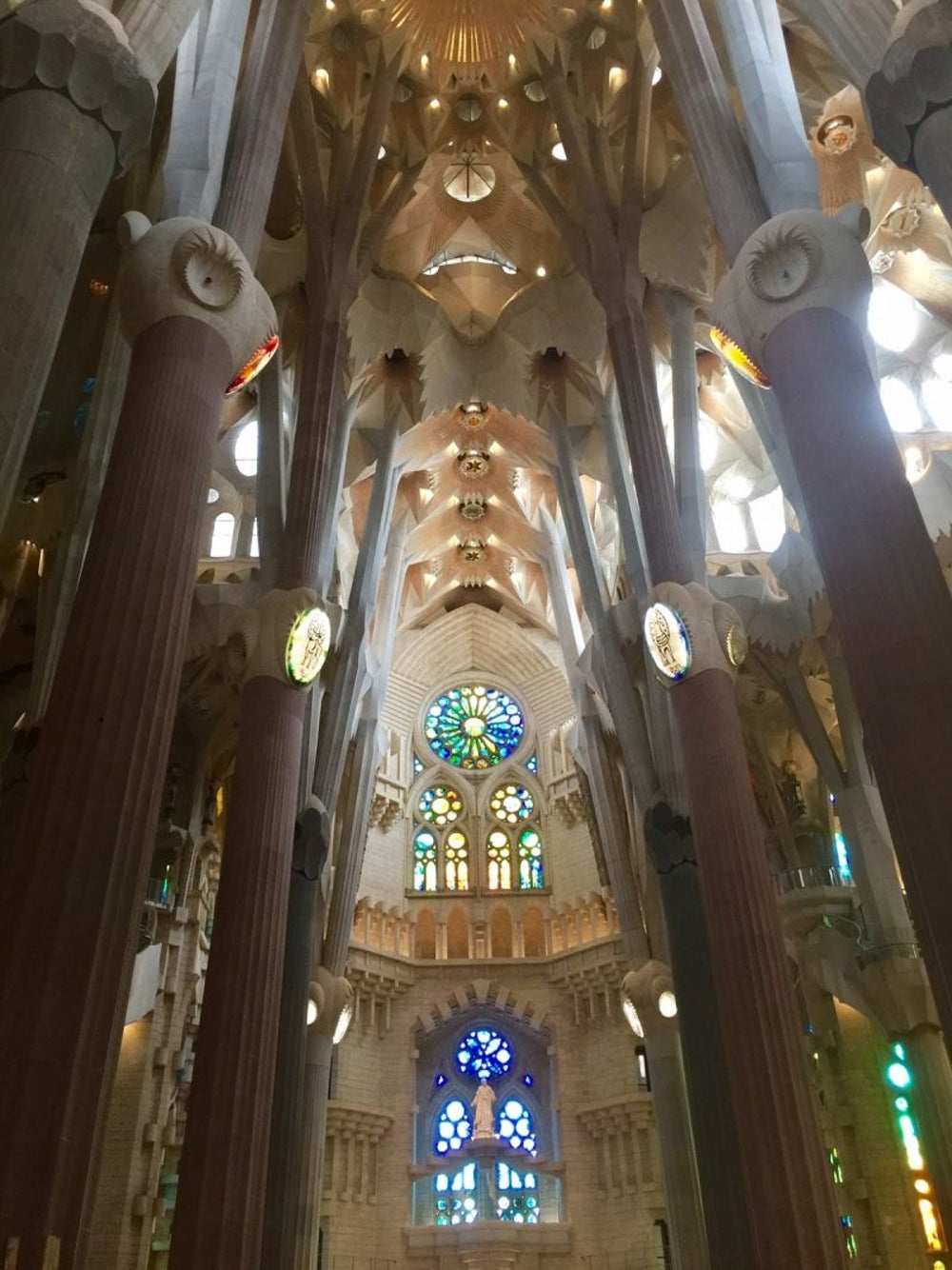 La Sagrada Familia is the most famous, intricate and beloved of Gaudi’s achievements. This temple was originally started by architect Francisco de Paula del Villar y Lozano in 1882. Sagrada Familia, the Expiatory Temple of the Holy Family, started with the construction of the crypt located under the apse. Due to a disagreement, Lozano resigned and Gaudi took over the project in 1883, which he oversaw until his death in 1926.

Once Gaudi took over the construction of the temple he proposed a new and grander design that was more monumental and innovative, in regard to form, structure and construction. In 1914 Gaudi worked exclusively on the immensely symbolic temple and in fact lived and was buried in Sagrada Familia. Gaudi’s masterpiece has been in continual construction since its inception and the goal is to finish by 2026. 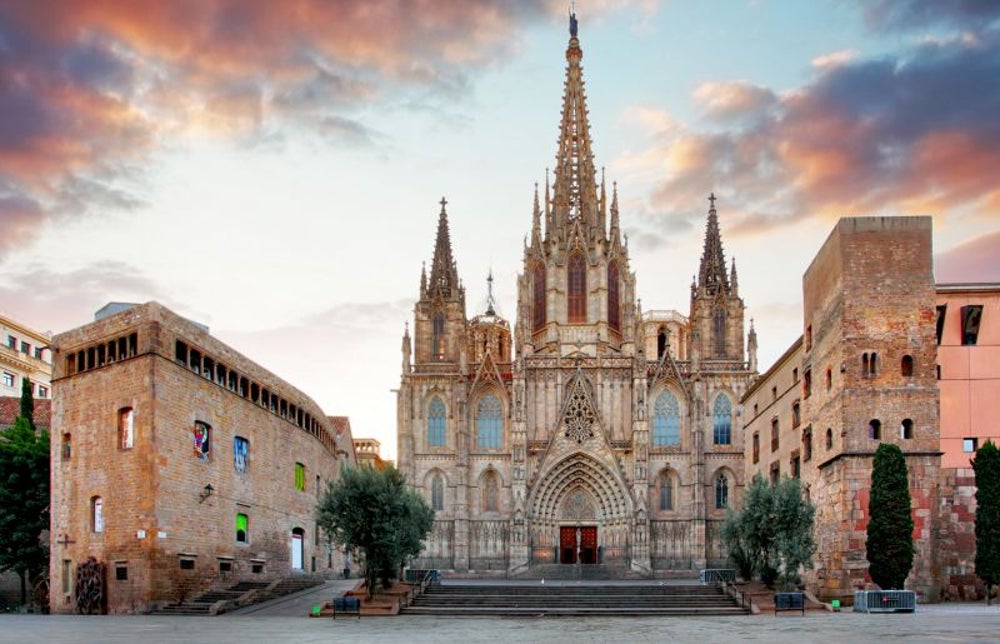 Barrio Gotico, the Gothic Quarter, is the center of the Old City of Barcelona. The Gothic Quarter is a beautiful Romanesque part of Barcelona and one of the most famous and interesting landmarks. It was my personal favorite location to explore. The iconic old European streets and alleys blend historic artifacts from the Roman dominion through the Spanish Civil War. The Quarter thrives with a lively, modern, artistic culture of shops and delicious culinary experiences. The bonus is many streets are pedestrian only. Quaint terraces and plazas enlivened by local musicians in small bars await discovery.

Portal de L’Angel offers local fashion as well as high-end shops. We wandered through the imposing and impressive interior of La Seu Cathedral. Outside we explored the alleyways along the Cathedral’s walls. From there we set out to Carrer del Bisbe to see the neo-Gothic bridge hanging over the street.

Prior to the Spanish Inquisition, Jewish merchants were an essential part of life in Barcelona. We followed the labyrinths of alleys between the Cathedral, Placa Jaume and Placa del Pi and ended in El Call to view Sinagoga Mayor. Although the synagogue does not presently hold a congregation it is believed to be one of the oldest and most ancient synagogues in Europe. The museum inside is a very interesting look into Jewish life during the medieval era of Barcelona. 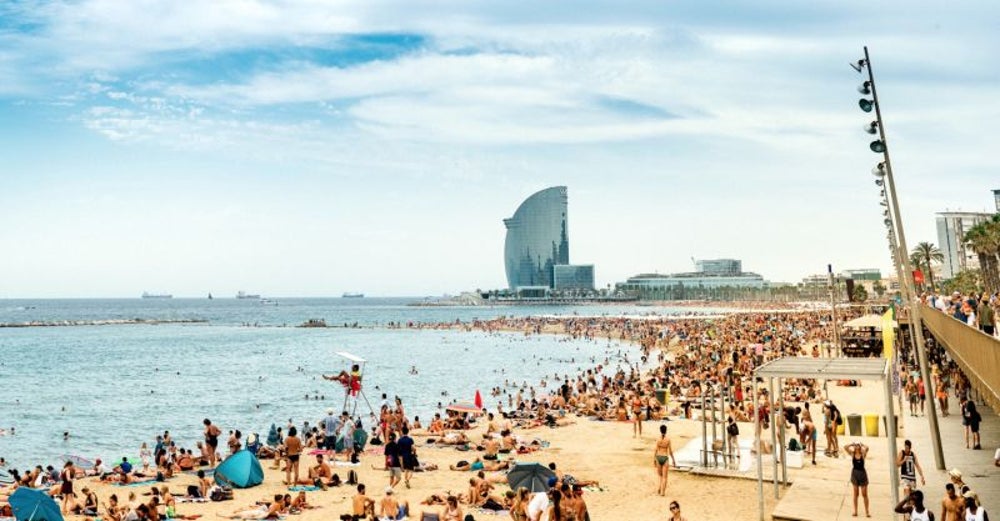 Barcelona also has beaches that appeal to everyone, whether you are looking for entertainment and food or just quiet solace.

Sand artists, singing and dancing donut vendors and drum players dot the crowded touristy stretch of Barceloneta Beach. There is some great seafood and the entertainment is fabulous and free. 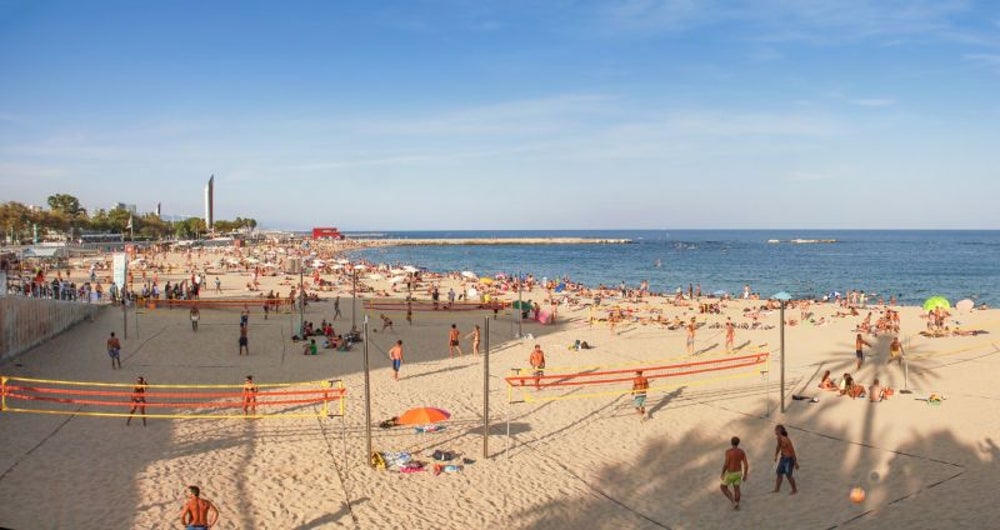 Image credit: Romeo Reidl | Getty Images
Excellent watersports are available at Nova Icaria Beach. This beach attracts a much younger crowd and the beach is next to the Olympic Marina, Observatory and a shopping center with an English language movie theater. These beaches are the closest to Barcelona but there are other options if you wish to hop on a train. 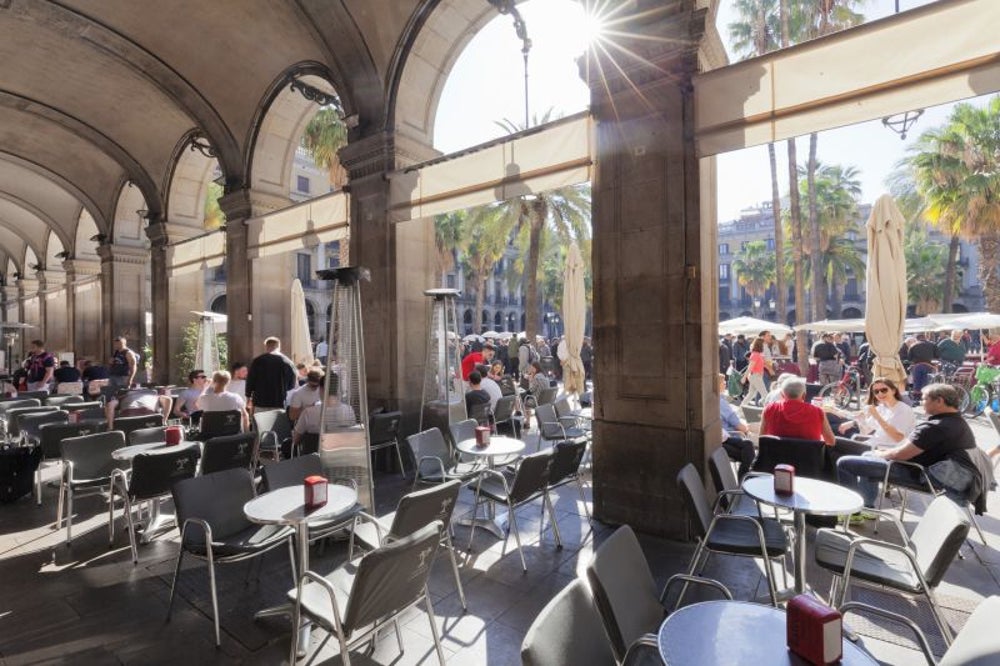 Barcelona boasts of free Wi-Fi citywide. This comes in handy if you need to knock out any work-related tasks, or just want to blow up your Instagram or social accounts with some super dope and gorgeous pics.

The cafes in Barcelona are open to everyone. Most consist of lounge-style areas, similar to a coworking space in the states, and make for great areas to work or network.

Related: Lifestyles of the Rich and Frugal: 7 Thrifty Millionaires and Billionaires 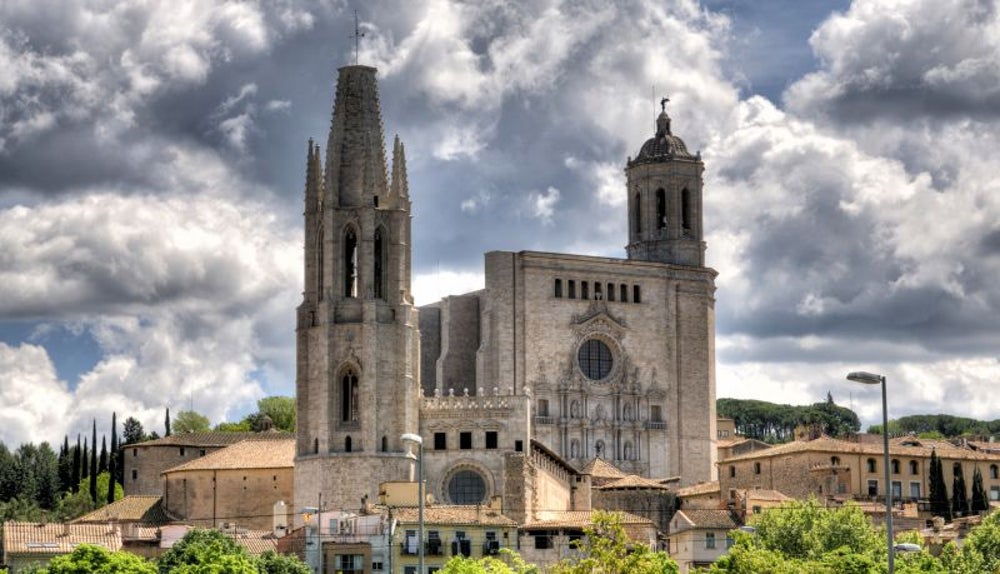 For all of you Game of Thrones fans, you can drive or take a high-speed train to Girona, about 65 miles from Barcelona. In Girona, you can explore the shooting locations of GOT and wander the grounds of various castles.

Barcelona is a diverse, lively, ancient, city with something for everyone and I highly recommend exploring this beautiful city as soon as you can. For adventurers who would like to have a mix of fun and culture in a modern setting, Barcelona is the destination.

Note: At the time I was finishing this column, I had just heard the devastating news about the terrorist attack at La Rambla. Our thoughts and prayers go out to the wonderful, kind and hospitable people living in Barcelona.

Why Living in Your Prosperity Zone Is the Key to Success

4 Secrets Entrepreneurs Should Know to Optimize Their Morning Routine