The Best Under-Desk Ellipticals of 2021

Turn your work into a workout and meet your cardio goals without ever having to leave your desk.
Next Article

Entrepreneur Deals
Entrepreneur Leadership Network Contributor
Entrepreneur Deals
September 14, 2021 7 min read
Disclosure: Our goal is to feature products and services that we think you'll find interesting and useful. If you purchase them, Entrepreneur may get a small share of the revenue from the sale from our commerce partners.

For those of us still burning the midnight oil running our businesses from home, the lack of cardio we used to get from our commutes can be an inhibiting factor to our productivity. With that in mind, compounded with the surge in popularity of at-home exercise bikes such as those from Peloton and Echelon during the COVID-19 pandemic, it should come as no surprise that under-desk elliptical machines are having their moment as well.

The Centers for Disease Control and Prevention (CDC) advises all adults over the age of 18 to engage in 150 minutes of moderate physical activity, 75 minutes of high-intensity workouts or some combination of both each week. While that might not sound like a whole lot, the unfortunate reality is that not everyone can afford the time away from their desks during the day to achieve that. However, with the aid of one of the best under-desk ellipticals, you can keep writing those proposals, remotely managing your teams and crunching numbers while striding or cycling, without ever having to leave your workstation.

Regardless of budget, we found the best under-desk ellipticals for movers and shakers of all breeds. Earlier, we assisted you in finding the best standing desk converters to help you stay active at the office. Now, we’re here to help you find an awesome under-desk elliptical to keep you on your feet, or keep your feet moving. Whether you’re heading back to the office or permanently working from your living quarters, these options will get you back on your feet in no time at all. 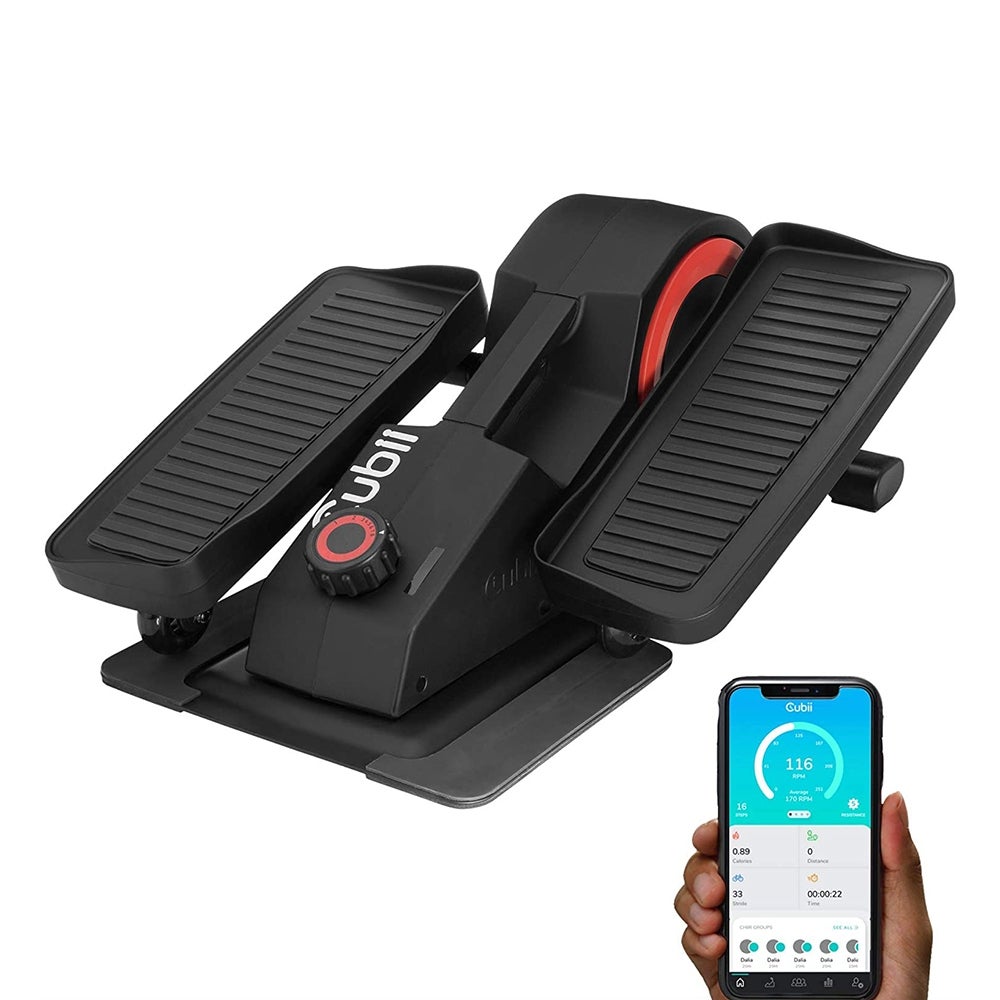 Cubii Pro (also at other retailers) is among the most popular choices on this list, and for good reason. Unlike some of its competitors, the $349 machine is on the expensive side but it also has a free companion app for both Android and iOS that is both well designed and intuitive to use. It’s also the only under-desk elliptical you’ll find that’s compatible with Fitbit and Apple HealthKit, giving it a leg up, so to speak, on other products in the category.

Setting it up is a breeze too, requiring only four screws to assemble and secure the pedals. If you’re looking for a plug-and-play pick that goes above and beyond in functionality, the Cubii Pro is the best under-desk elliptical for you. 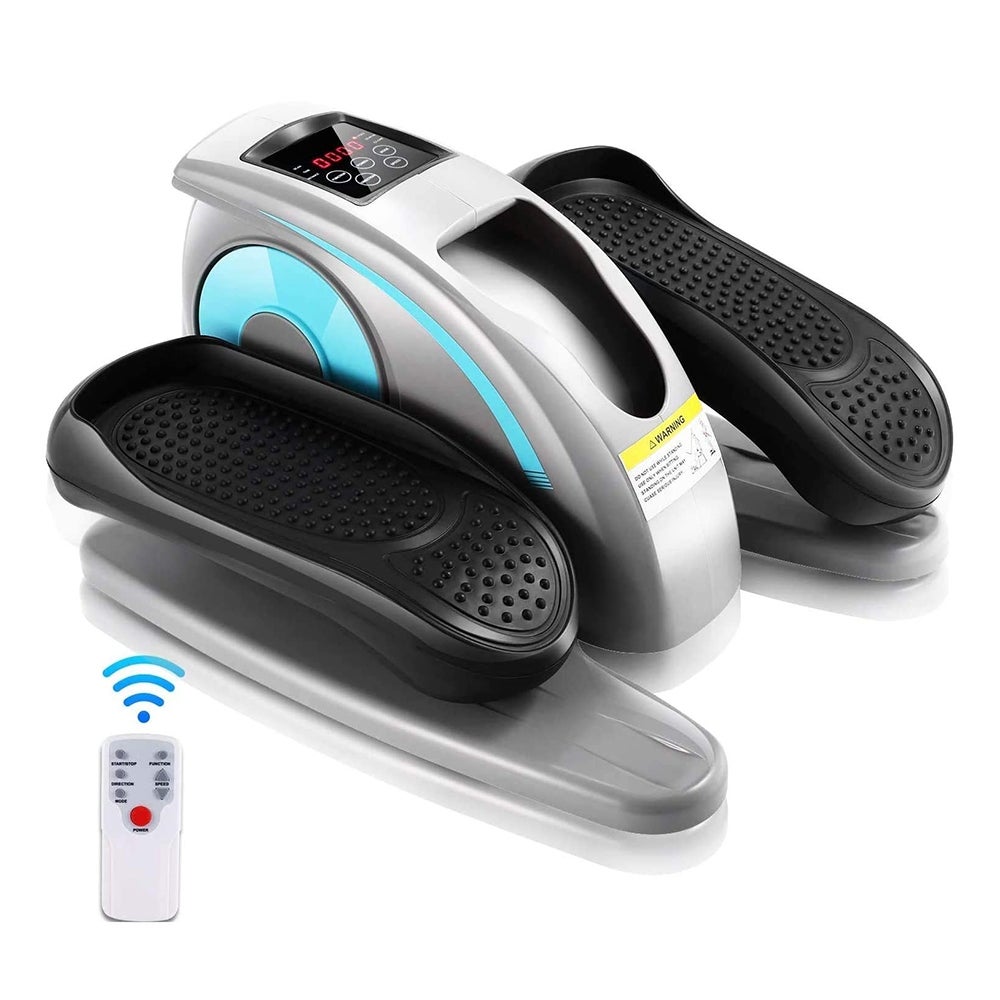 Measuring just 18 x 14 x 10 inches and weighing 20 pounds (compared to the Cubii Pro’s 23 x 18 x 10-inch, 32-pound form factor), Ancheer gives Cubii a run for its money in the size department. Made to be portable, a built-in handle lets you travel between home and work with the Under Desk Cycle (also at other retailers) in tow.

The textured “massage” pedals feature ergonomic ridges similar to those you would find in a pedicure spa, and although it doesn’t have an app, a built-in LCD monitor helps you keep track of the distance, steps and calories burned, along with the amount of time spent exercising. Best of all, there’s zero set up involved. The Ancheer Under Desk Cycle is ready for your first workout out of the box. 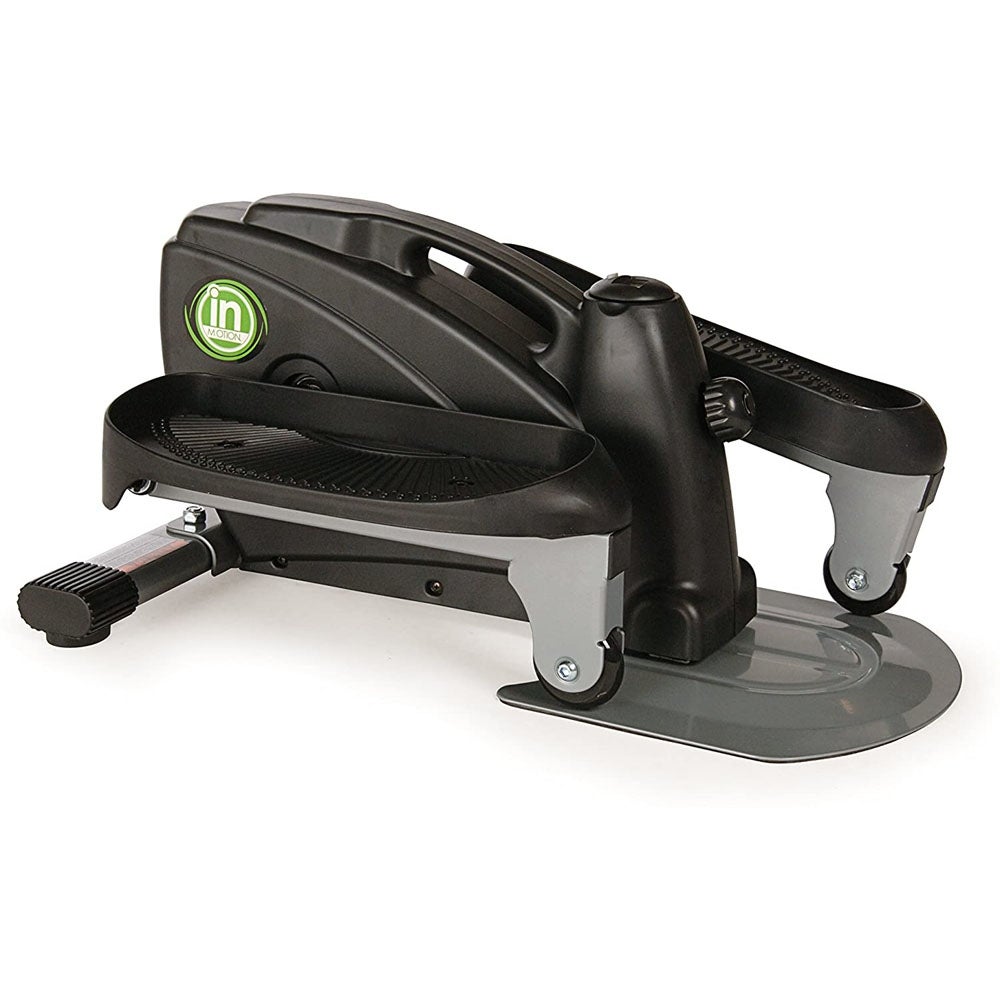 Despite the compact form factor, the Stamina InMotion sports ample non-slip pedals that provide excellent grip. A built-in handle makes the InMotion simple to tote around from room to room. Although the Stamina InMotion is inexpensive, it doesn’t skimp on features, making it a great way to get work and a workout done at the same time. 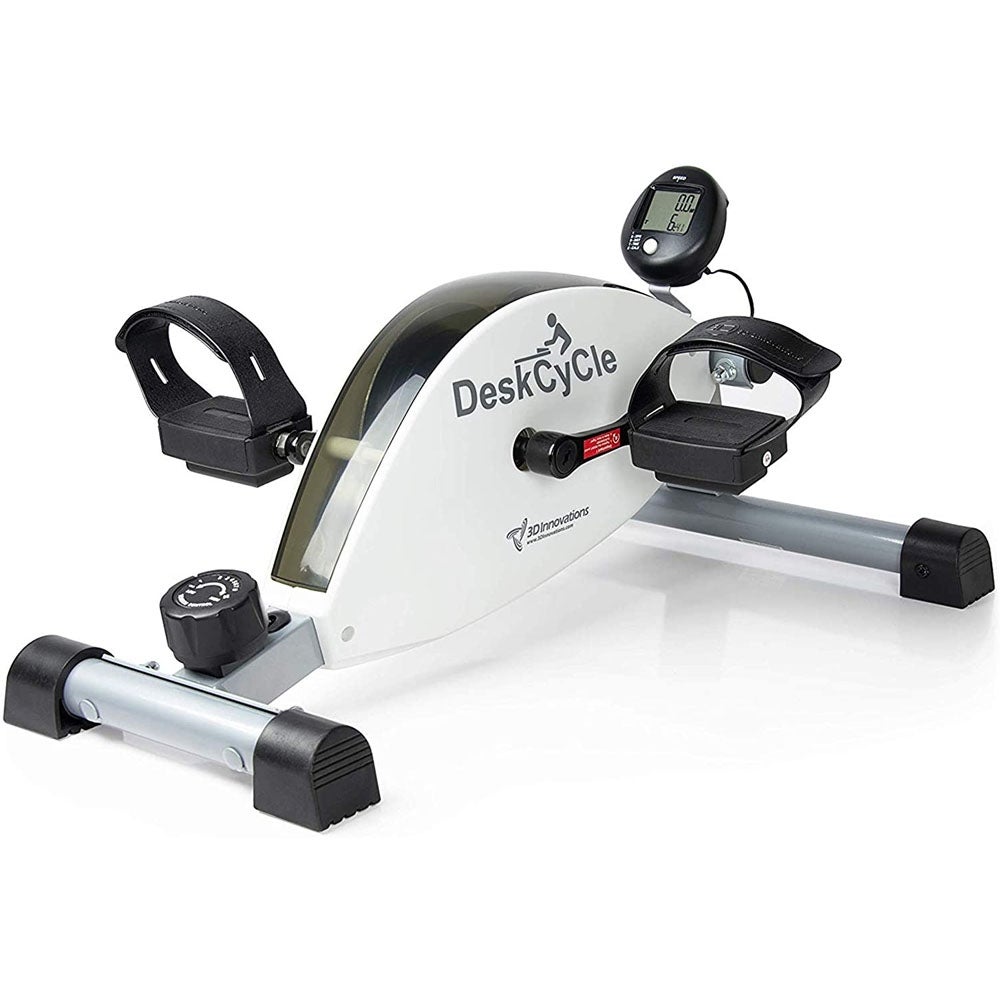 All under-desk ellipticals are pretty discreet because of their concealed placement (you know, under the desk). But another important aspect to consider when multitasking and getting an efficient workout is the noise level. The DeskCycle (also at other retailers) is a particularly quiet under-desk elliptical that can give you a fantastic, unnoticed workout.

Especially when you’re sitting across from another person in a cubicle or open office, you’ll want to be stealthy, lest you face the wrath of passive aggressiveness from an irritated coworker. The DeskCycle helps you avert that crisis, employing a hushed magnetic resistance mechanism to not only keep your workouts quiet but better on your joints as well. 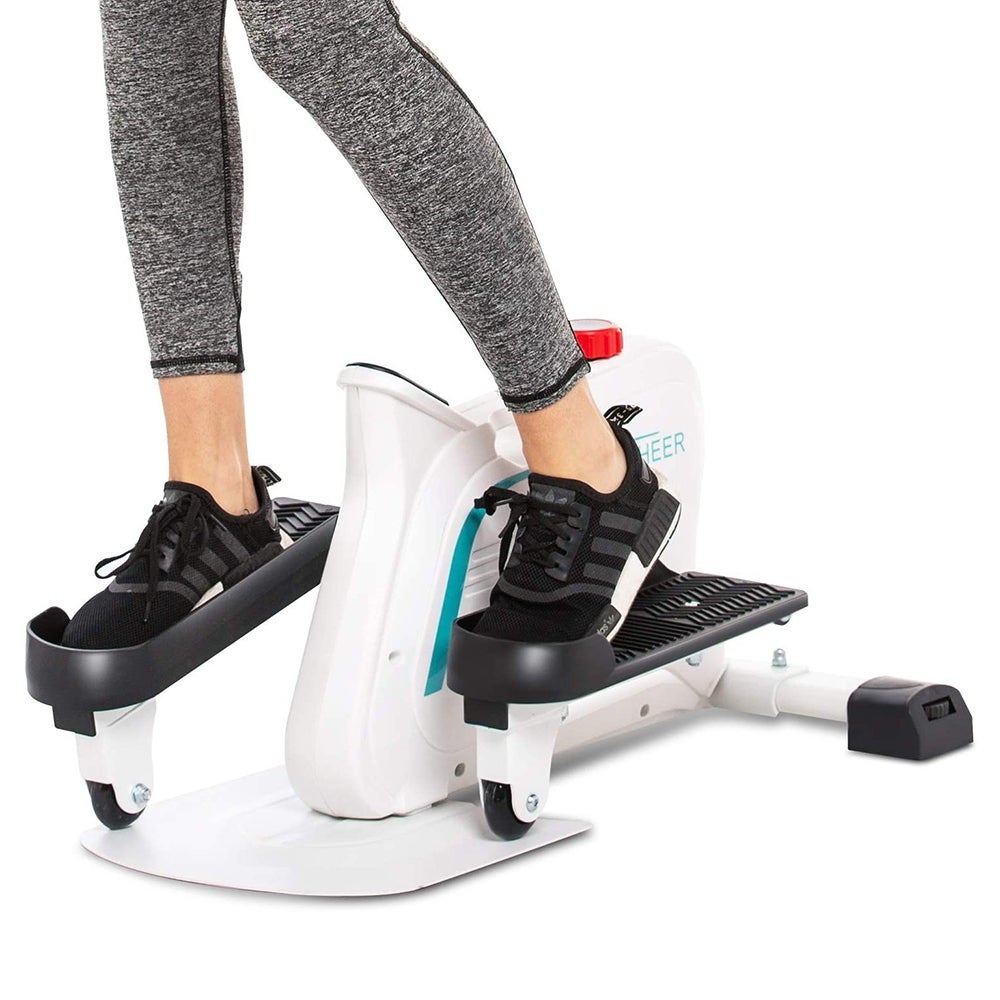 Although it’s not the only elliptical out there that encourages you to decide for yourself whether you want to work out while sitting or while standing, the Ancheer Mini Compact Strider (also at other retailers) was created with the intent of versatility. Positioned as a safer alternative to running for those with bad knees, this elliptical is suited to simulate jogging in addition to biking.

Sit, stand, move forward, reverse, pedal or run—Ancheer’s masterful engineering ensures nothing is off the table. Assembly is required, but with only eight screws, it shouldn’t take you more than 10 minutes to complete. Anti-slip pedals round out the Mini Compact Strider as the best standing under-desk elliptical you can buy. 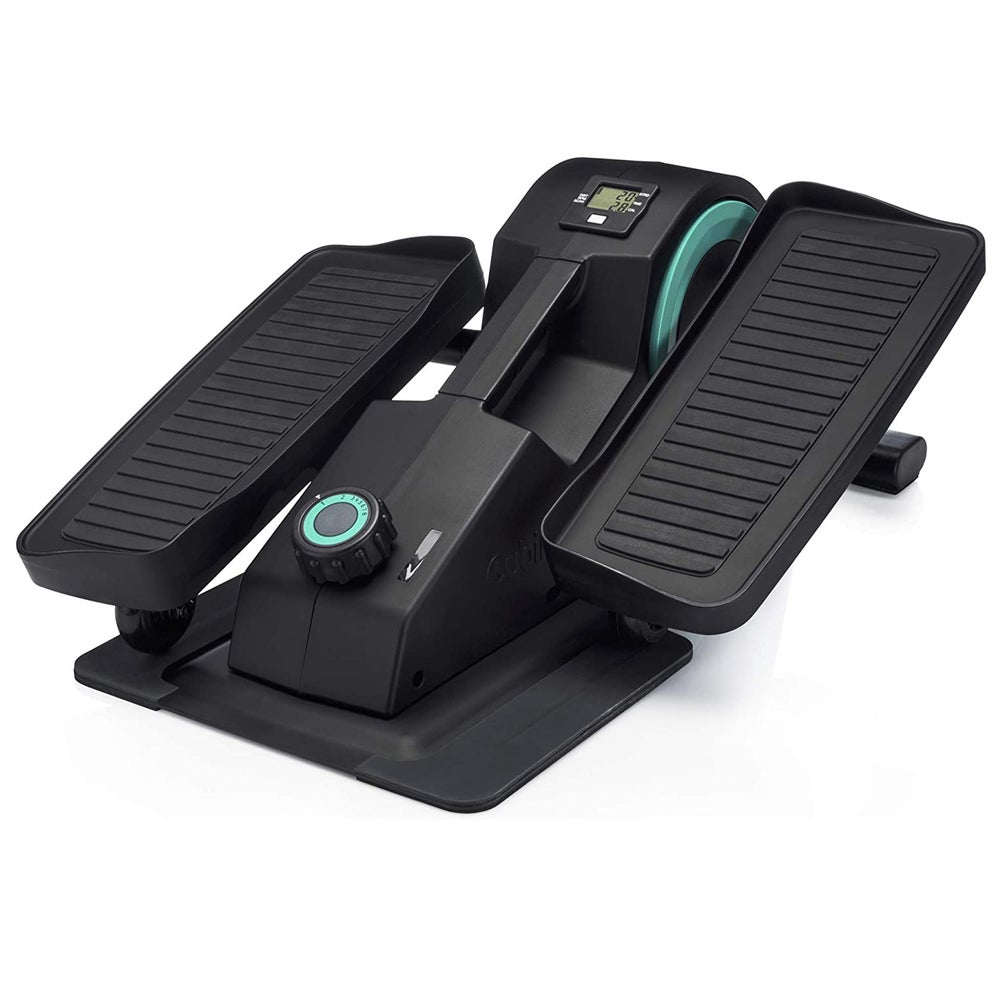 If forking over $349 for the Cubii Pro is out of the question, allow us to introduce you to the Cubii JR1 (also at other retailers), the company’s more entry-level or junior alternative to its professional-grade elliptical that offers many of the same perks for $100 less.

Join the “Cubii Communitii” on Android and iOS as you toggle between eight levels of resistance and take part in a collective fitness endeavor that you never have to be alone in undertaking. Even if it lacks the Bluetooth compatibility of its more expensive alternative, the app’s social features are still available at your disposal, and a built-in LCD display allows you to monitor your performance in real time. 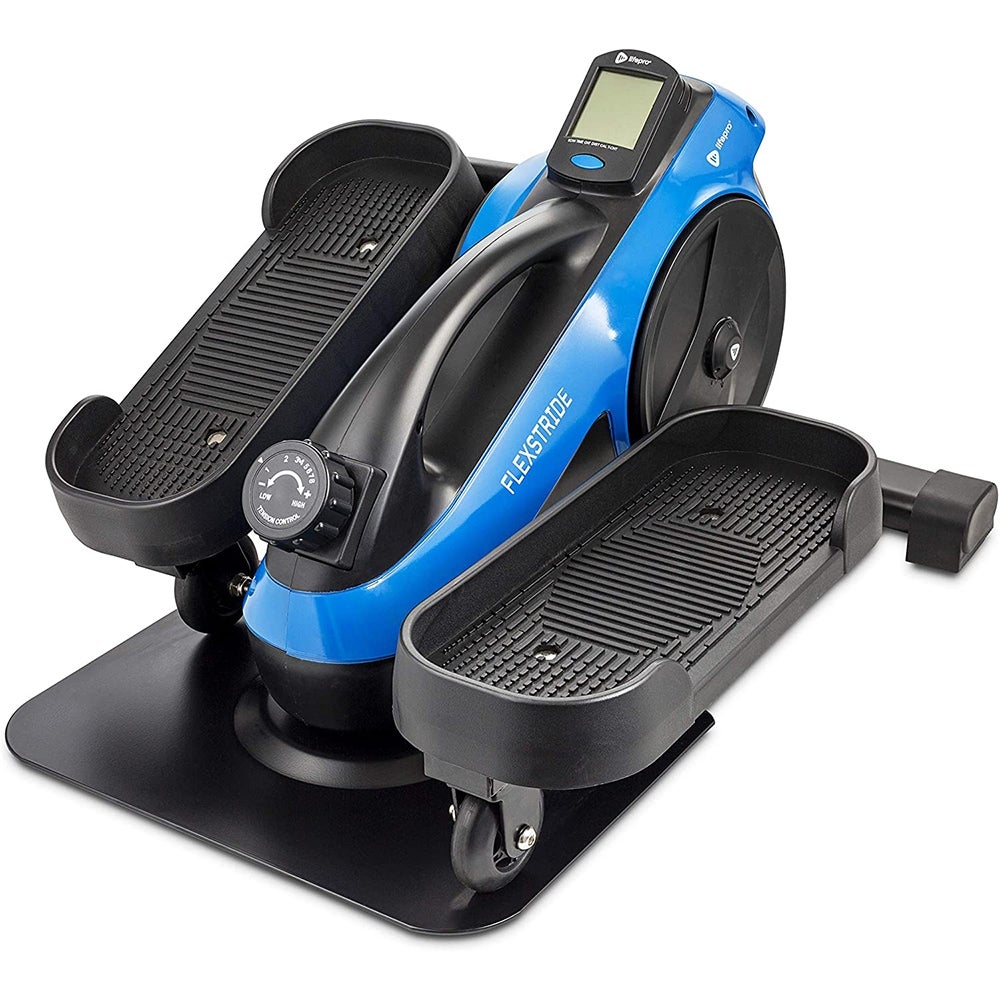 Chronic pain doesn’t have to mean cutting out exercise altogether, it just means rethinking the types of exercises you spend your time doing. As far as low-impact routines go, you’ll break a sweat using any machine on this list, without putting unnecessary strain on your joints.

But the LifePro FlexStride (also at other retailers) in particular takes this philosophy a step further, introducing a belt drive system accompanied by a set of silicone wheels to maintain smooth circular movements and put your arthralgia at ease. Adjustable tension, an LCD display and a travel handle are all there for the sake of convenience, but the FlexStride proves you don’t have to pay a premium for high-quality rehabilitation from an under-desk elliptical trainer.