How to Ditch the Cube

Pamela Slim, author of Cubicle Nation, wants to set you free. Consider her advice for opting out of corporate life.

By Kimberlee Morrison
October 19, 2010
This story appears in the September 2010 issue of Start Up. 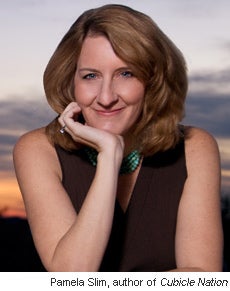 Pamela Slim was tired. For the first 10 years of her career, she was busy juggling two demanding jobs. By day, she was a corporate director of training and development; at night and on weekends, she served as a volunteer director of a martial arts organization, working with at-risk children. The pace eventually took its toll. She knew she had to take a break. Perhaps surprising to some, she decided to walk away from her day job.

That bold and abrupt departure 14 years ago has turned into a permanent escape from -- as she puts it -- the "oppressive, constraining, crazy-making environment" of the corporate cubicle. Slim is now a self-employed corporate consultant, designing and teaching leadership programs, sales presentation skills and providing executive career coaching for major corporations, including Hewlett Packard, Charles Schwab and Cisco Systems.