Playboy CEO: Nudity Could Completely Vanish From the Brand

Scott Flanders, 57, the first Playboy Enterprises Inc. CEO not to share DNA with its 88-year-old founder and figurehead Hugh Hefner, says no one's ever asked him this "critical inflection point" before.

Hmmm. Never? Really? But it's such an obvious question, one that he really has no choice but to correctly answer -- and soon -- to save the aging and troubled legacy brand. Flanders took the reins from Hefner's daughter Christie in 2009, the year Playboy lost $51.3 million, its stock price fell below a dollar a share and it barely escaped being delisted by the New York Stock Exchange. Talk about baptism by fire.

Related: What Disney and Playboy Can Teach You About Branding

The 20-year media veteran, formerly CEO of Freedom Communications Inc., Columbia House and several other mainstream publishing giants, admits that he isn't entirely sure what the magic fix is. "I'm still chipping away to reveal the elephant that will be our future," Flanders tells Entrepreneur, comparing the future Playboy to an ice sculpture in progress, a vision not yet realized.

Flanders says it's likely not more of what put Playboy on the map (and under our beds) in the first place that will save it: sexy naked women.

"You could argue that nudity is a distraction for us and actually shrinks our audience rather than expands it," says Flanders. "At the time when Hef founded the company [in 1953], nudity was provocative, it was attention-grabbing, it was unique and today it's not. It's passé."

So passé that he predicts it will eventually vanish from the Playboy brand altogether. Probably not as long as Hefner still owns a third of the company and personally selects all of the nude spreads in the magazine, along with each Playmate of the Month and Year.

"Sexy, beautiful, sophisticated women that men aspire to want to have attracted to them, that will never change in the DNA of Playboy, but, I suspect, whether it's in my tenure or my successor's, that Playboy will evolve away from and perhaps completely [be] out of nudity."

The world's best-known bunny, in business now for 61 long years, is indeed cleaning up its act online and has been for some time. Well, somewhat. A newly "safe for work" Playboy.com launched last summer, Flanders eagerly points out. Call us old-fashioned, but with so many strategically nipple-covering "hand bras" and "arm bras" still on the site, we wouldn't exactly classify the racy sex-themed content hub as SFW. The site links to Playboy's 18 and over online nudie pics destination, PlayboyPlus.com.

Each business was 'weaker than the next'

Let's backtrack a bit, to when Playboy first started to strip itself away from the sexier side of the biz, Hefner's favorite side from the very beginning. The "business end of the business" never interested him and it shows.

When Flanders came on board, Playboy was financially on the brink of extinction. Brand-wise, it had devolved into a poorly run business inside and out.

"We saw ourselves -- the company, the management, the leadership, all the way to the rank and file -- as this powerful global media company," Flanders says, "and, in fact, we were a powerfully recognized brand, but our businesses, each one of them, was weaker than the next."

Flanders knew he was boarding a sinking ship, but walked the gangplank anyway, even after his youngest daughter vowed she'd never speak to him again if he took the job because she "thought it was the creepiest thing." (She later convinced him to take the position and eventually interned at Playboy for a summer.)

Whatever pushback was headed Flanders' way at Playboy -- and he'd get plenty of it -- he was confident he could handle it. "I had experience working with moguls and complex governance situations with dynamics of larger-than-life egos and complicated family dynamics," he says. "That didn't mean it was going to be easy for me or anyone else. It's just I was undaunted by that."

Ever since he took the post, which he says he would not have accepted "had I known what I was stepping into," he has executed one change after another, each a step closer to fulfilling his plan to 1) "transform Playboy into a brand management company," and 2) to return Playboy to "its original luster, when it was in its heyday of the 1960s and 1970s."

Related: The Secret Behind This Hollywood Hotel's 50-Year Run

First he cut staff by 75 percent. Only 11 of the 535 non-Playboy mansion staffers who were on the payroll when he started remain today, he says. The company, not counting a small army of an estimated 65 mansion employees, now has just 200 full-time employees. Some work from home.

After gutting the ranks and impressively taking the company from the red to a $10 million profit, Flanders convinced Hefner to return Playboy to its roots as a private company. In March 2011, Hefner bought his baby back for $207 million, in association with private equity partner Rizvi Traverse Management.

Related: The Business of Nudity: The Unlikely Success of Mr. Skin

"To restore the original luster of the brand, we were chipping away those things that we were not," Flanders reflects. "First and foremost was selling off the adult TV business. Playboy should not have association with being in the sex-act business."

Last Spring, Playboy recaptured full control of Playboy.com "at significant expense" and relaunched it in August. It's chock full of a contradictory mix of highly shareable, mostly advertiser-friendly clickbait content, BuzzFeed-style lists, flowchart infographics that help men decide whether or not to catcall a woman in public and a growing crop of articles written by prominent feminists. While the text is mildly toned down -- close to on par with Maxim or GQ -- the visuals are still mainly bare breast and skimpy bikini-centric. 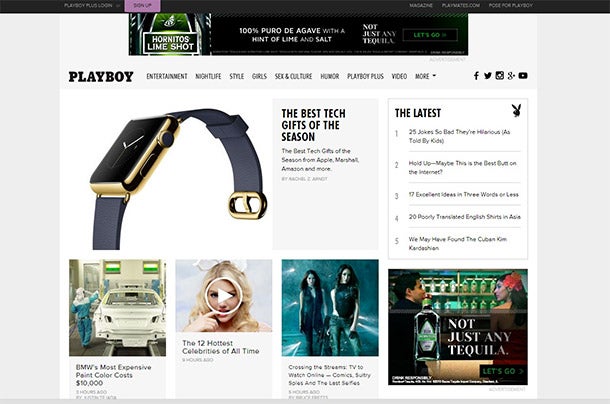 Meanwhile, Flanders says the consumer reaction to the overhauled site has exceeded his expectations. With a healthy bump in traffic from Playboy's popular Facebook page, the number of unique visitors per month has quadrupled since June, a Playboy representative notes, from a low of 4 million uniques to an estimated 14.5 million last month.

So far, early as it is, taking some of the dirtier aspects out of Playboy.com seems to be gaining momentum with consumers, at least better than it did with the TheSmokingJacket.com, Playboy's first and failed 2010 online rebranding attempt. There's also Playboysfw.kinja.com, launched the same year, a website Jezebel describes as "all writing, no girls."

Playboy also has a free "SFW" Android app. It recently pulled the poorly reviewed Apple version of it from iTunes, replacing it with Playboy NOW, its new, "sexy, non-nude" free mobile video app.

Looking back, Flanders says he regrets the Manwin agreement because the company used Playboy.com to funnel traffic to its hardcore adult subscription sites, which he thinks was "too off-brand" with Playboy's shift to a retro-clean rebrand, a return to the classy Playboy your grandfather might recall as a gentleman's destination. The one he, you know, "read for the articles," some of the earlier ones by literary greats like Atwood, Updike and Nabokov (the caliber of which you won't find on Playboy.com).

The essential guide to being the Playboy man. Welcome to The Playbook - http://t.co/vbdEves5je pic.twitter.com/Hr9CVHfh1a

Still, the Manwin deal was flush with upsides, some that would help Flanders reposition Playboy as less of a lewd publishing outlet and more of a clean-cut brand-management company. Specifically, it afforded Playboy the cash to recruit what Flanders calls a "world-class management team," kill off 70 brand-weakening licensing deals and relocate from its original headquarters in Hefner's native Chicago to a glitzy refurbished Beverly Hills office and photo studio (swanky full bar included, of course).

The deal also enabled Playboy to expand what Flanders sees as a rescue cash cow, rather cash rabbit -- exploiting the enduring popularity of Art Paul's immediately recognizable tuxedo-tied rabbit-head logo outside of the U.S., particularly in censored China. "We generate almost $30 million a year in net licensing profits from China alone," Flanders says, "a country where we've never had a magazine or a website or a TV channel."

By the third quarter of 2012, consumer licensing -- from rabbit emblazoned apparel to Coty perfume and just about everything imaginable in between -- accounted for 74 percent of Playboy's profits.

Related: 5 Secrets for Making Your Logo Stand Out

Flash forward to 2013. Playboy, "in the midst of a multi-year turnaround," was still clawing its way back to relevance in North America under Flanders' direction, having doubled its global licensing revenue and freshly refinanced $185 million in loans. It was also closing in on a fat stack of more promising licensing deals. But, when those deals didn't close fast enough, Standard & Poor's cut Playboy's corporate credit rating down to a dismal CCC+, and downgraded its senior-secured debt to a B-.

It's not clear where Playboy stands financially today. The company declined to share its latest earnings metrics with us. We do know, though, that in 2009, when Flanders came aboard, its annual revenue was $240 million. In 2012, it was $135 million, according to The Wall Street Journal.

Flanders did, however, share that Playboy magazine, the namesake flagship of the brand, is now "breaking even." It once boasted 7.2 million readers at its peak in 1972, but only has a print circulation of 1.2 million and an estimated 30,000 paying digital subscribers. The glossy was hemorrhaging around $12 million per year back when Flanders took the helm, with a circulation of 2.5 million. He credits the publication's return to the black to a combination of steady but "flat" ad revenues, licensing earnings from 29 international editions and to its recently modernized photography.

An iconic brand and an uncertain future

Though he claims he has no actual editorial pull, Flanders nudged others within the company to contemporize the overall look and feel of the publication. He felt it had grown "stale," mostly due to using essentially the same pool of photographers for more than 25 years. Updating the visual aesthetic, he says, particularly the eye candy, of Playboy was far from an easy sell.

"People said, "Oh, we know what Hef likes. He likes this type of photography,' and I said, "Well that's bullshit. That's like saying he likes the same meatloaf he's been eating for 25 years. Let's give him a piece of steak and see if he likes that,'" Flanders says. "And, sure as hell, as soon as they gave Hef more contemporary photography he loved it."

Will floating yet another new "SFW" online presence with buzzy viral content and tamer chic pics work for Playboy's target market -- 18- to 34-year-olds (though Flanders says it appeals to "13- to 80-year-olds")? Flanders hopes so.

"We are not aggressively investing to chase that marginal reader," Flanders says, "because they're frankly not that valuable to our advertiser. Instead, we're shifting much of our content investment toward digital, and specifically video. The viewer of our digital content is younger and more affluent and spends more time with the content than our older, less affluent more rural viewer of our magazine."

Related: Meet the Franchise Bringing Adult Products Out of the Shadows

And therein lies the naked truth: Like all publishers, adult and non, Playboy's print readers aren't getting any younger or richer or more attractive to advertisers. Online is where Playboy's future audience lives, if it can figure out a way to attract them and keep them coming back for more. If it can't, there's always the fallback licensing cash rabbit, the bunny that takes a licking and somehow keeps on ticking, at least for now.

Related: The 8 Must-Follow Rules for Rebranding Your Company

Correction: An earlier version of this article misstated Playboy magazine's financial situation when Scott Flanders took the helm as CEO of Playboy Enterprises Inc. The magazine was losing $12 million per year.