Do My Stuff and Get Paid

Whether you're too busy to do it yourself or want to make some extra money on the side, this new online marketplace has you covered.

Like most people, Darren Berkovitz and his partners were experiencing a common dilemma: too much to do and not enough time to do it. They did, however, find the time to create a solution. The result is DoMyStuff.com, an online community where busy people can quickly find assistants to handle their errands and tasks. "Outsourcing is a huge buzzword right now," says Berkovitz, who owns an internet incubating company with Omri Cohen, Stacy Stubblefield and David Gonen that outsources projects to other businesses. "We thought, we outsource so many things, why not outsource our daily tasks?" 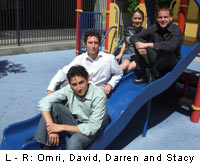 Here's how it works: Busy people--known as buyers--post a task they need completed on the site. Everything from mowing the lawn to chartering a private jet is appropriate; no job is too big or too small. Local individuals or businesses then bid on tasks by providing information, such as how much they'll charge, when the task will be completed and details about the service they'll provide. Buyers review bids and choose the best assistant to help them. The site is free for buyers, while DoMyStuff.com keeps a percentage of the assistant's winning bid.

As an example, Berkovitz described a recent situation in which he needed to move but had no time to search for apartments. So he posted the job on DoMyStuff.com. He received eight bids, with one person going so far as to make an Excel spreadsheet detailing all the apartments in the area including rent, amenities and other pertinent information. The person won the bid, and Berkovitz had a new place to live without spending any of his own free time looking.

"The great thing about DoMyStuff is that it affects every single person; everyone can relate to the problems we're trying to solve," says Berkovitz, who points out that most people fall into two categories: those who don't have enough hours in the day and those who want to make more money. "With this company, we're bringing those two groups of people together."

Berkovitz and his partners put approximately $50,000 of private funding into the startup for website construction and initial marketing, but have spent virtually nothing on marketing since then. "It's been really spreading virally, which is the hallmark of a great idea," says Berkovitz. The site, in fact, is averaging 600 new signups a day--all, Berkovitz notes, with mainly word-of-mouth marketing.

Unlike Craigslist and other online communities that bring job posters and seekers together, DoMyStuff.com has taken several measures to prevent fraud and other user problems that have plagued other sites. In addition to engineering a feedback system, similar to those of eBay and Amazon, that rates assistants, DoMyStuff.com provides an online escrow account where buyers can forward their payment. The escrow account benefits both parties in that the funds aren't released until the job is completed, and assistants can see that the account has been funded and their payment is waiting.

In addition to providing a service to busy people, Berkovitz feels the site is a great opportunity for entrepreneurs who want to start their own business on the side. Depending on how much time they're willing to put in, assistants can turn the extra work into an easy weekend gig or work up to the point of becoming a contractor and subcontracting tasks to people below them. "You can literally go on [to the site] this afternoon and start making money," says Berkovitz. "It's an incredible opportunity for people on both sides of the fence."