From gourmet grilled-cheese sandwiches to mac and cheese, these specialty spots have found their niche by focusing on one simple item.

October 17, 2007
Opinions expressed by Entrepreneur contributors are their own.

They say one is the loneliest number, but judging by the growing number of specialty restaurants, going solo can draw a crowd. Some restaurants and food vendors are taking simple items like hummus, Belgian fries, crepes and even cereal and creating a menu based solely on them. Often, these specialty food stops feature nostalgic favorites or indulgences you simply can't pass up. 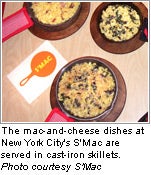 One classic making a comeback is macaroni and cheese. "We draw crowds from age 1 to 100," says Sarita Ekya, co-founder of S'Mac in New York City. "We've hooked a lot of people simply through word-of-mouth."

Though the National Restaurant Association hasn't done specific research on this segment of the restaurant industry yet, senior vice president of research and information services, Hudson Riehle, says it's a trend that will become even more prevalent in the future. Industry-wide, sales are expected to reach $537 billion this year. "Because the restaurant industry has exhibited such progressive growth and will continue to, it's inevitable more establishments will focus on specialized items," says Riehle.

He predicts simple items like cereal will fit perfectly into this emerging food category. "What's old is new again. For example, grilled cheese. Take a popular and common food and offer it with a host of different preparation techniques, then generate a large number of potential combinations the consumer relishes." 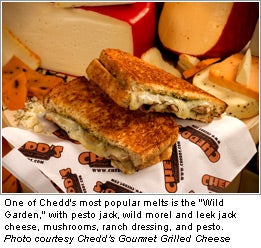 That's exactly what the founders of Chedd's Gourmet Grilled Cheese in Colorado are doing. In 2003, Dirk Bruley and his wife, Wendy, took their love for Wisconsin cheese and began experimenting with different flavor combinations. Now grilled-cheese fanatics line up day and night at Chedd's to order from the list of 25 specialty melts or create their own favorite from a selection of more than 35 Wisconsin cheeses. With two Colorado locations under their belt, the Bruleys and their business partner, Jamie Jalazo, are franchising across the country.

As for marketing, they don't need it. Like S'Mac, Jalazo says they've relied heavily on word-of-mouth, and it's paid off. Though the company doesn't release sales figures, Jalazo says Chedd's is profitable and has experienced double-digit growth in the last year. And they don't plan to stray from their focused concept. "We just introduced our blueberry cheesecake milkshake to the menu. So we may add something small, but when it comes down to it, our concept works, and we're sticking with it," says Jalazo.

Ekya agrees on the importance of not diluting S'Mac's menu. "In the beginning, people were telling us to offer more than macaroni and cheese. But we chose not to. We didn't want to confuse people," she says. The restaurant does offer side items like salads, cookies and brownies, but Ekya says mac and cheese will never lose its top billing. It's a concept that has brought S'Mac's sales close to the $1 million mark in just 16 months of business, with plans to open a second location next year.

Though neither S'Mac nor Chedd's Gourmet Grilled Cheese have to share their limelight, Philadelphia cheesesteak legend Joe Vento, founder of Geno's Steaks, battles a plethora of local competitors. In south Philadelphia, cheesesteaks are a way of life. In fact, Vento says many locals can't end their day without consuming one. Along with their voracious appetite for the sandwiches comes a long list of carts and restaurants all claiming to have the best cheesesteak in Philly. 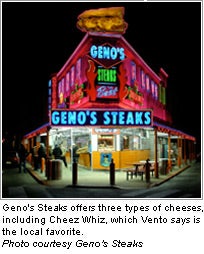 Perhaps one of the biggest reasons Geno's stands out from the crowd: Vento sells cheesesteaks--and nothing else. Despite the fact that his competitors, including his biggest rival, Pat's King of Steaks, located directly across the street, have added other items to their menus, Vento says he wouldn't consider it. "We're here to sell cheesesteaks, that's it. I think that's part of our success, by keeping the menu simple. Everything is offered in one size, it's that easy," he says.

He's decided on this approach after 41 years of experience. At one time, he offered a variety of items on his menu. But he discovered that by focusing on one item and making it well, he was more successful than ever. Now, at age 68 and still working in his restaurant seven days a week, Vento says he's become a multi-millionaire, all thanks to cheesesteaks.